“Oh my goodness … how did we get here?” National Association of Realtors (NAR) President-Elect Elizabeth Mendenhall asked the 2018 Leadership Summit crowd. “We’re here. There was some point in some time when someone came to you and said, ‘Do you want to serve in this position?’ And you said yes. You made that choice. You made that choice to be here and to be present, and you made a choice to own it.”

“Oh my goodness … how did we get here?” National Association of Realtors (NAR) president-elect Elizabeth Mendenhall asked the 2018 Leadership Summit crowd today. 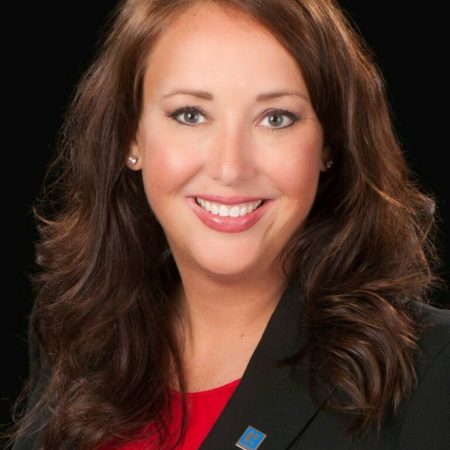 Looking back a few weeks, Mendenhall recalled her visit to the White House where there, too, she said to herself, “Oh my gosh … how did I get here?”

Mendenhall was there with the existing 2017 leadership team to discuss tax reform with the director of economic council, Gary Cohn. After sharing just a few of the many things he had on his plate — trying to solve the national budget, keeping Realtors happy (including his mother and father who are Realtors in Ohio), keeping the charitable deduction proponents happy, making schools happy — he threw his hands in the air and said, “I don’t know what to do!”

Someone in the White House — one of our top advisers in the country — said he didn’t know what to, but in that moment Mendenhall knew her purpose exactly: to keep advocating for the Realtor. “I’m realizing we are there representing 16.3 percent of the U.S. GDP. That’s why I’m there,” she said. “To represent real estate.”

As a local president and an incoming leader, Mendenhall said she has the jobs of 1.2 million people in her hands. “Their incomes, their families … it can be very overwhelming … and just like Gary when he threw his hands up” you might feel as though you don’t know what to do in order to solve these issues.

The answers are there there for us to find, she said, though they won’t appear out of thin air.

More than your day job

Technology and data play a huge role in our search for purpose. Instead of seeing tech as a threat that will phase the Realtor out, the industry has to use it to stay relevant.

“You see the headlines that Amazon is playing in real estate — they’re entering into our space. Then you see a headline that says the next broker is going to be artificial intelligence,” she said. “Facebook has just changed your advertising marketing campaign … and you have a member who comes up to you and says, ‘What are you doing about this at our local association?’”

We get lost in the day-to-day — the groceries, the laundry, closing deals so buyers and sellers can sleep in their new home — but all of that is just part of a Realtor’s day job.

Being a Realtor means taking on more, living up to the name, proving your worth and pushing harder for success. “And I’ll tell you,” Mendenhall said. “When I have an agent who comes to me, and they are trying to take it to the next level — trying to kick it up — I say, ‘OK … it’s going to be some work.”

“If you want to get to the next level you’ve got to work harder,” Mendenhall said. You’ve got to work more, do more, learn more and maybe even pay more. It’s a hard climb, she said, but when you get to that next place, it’s amazing.

Athletes call it shredding, she said. When going from one level to the next, they work extra hard to tear down their muscles so that when the fibers rebuild themselves, they get stronger and stronger.

Some are still working on that path. Either way, you have to make a decision: Do you want to stay where you’re at, or do you want to move to where you need to be?

If you choose to move, you’ve got to work harder “because every next level of your life is going to demand a different version of yourself. You won’t be that same person who gets to the next level … but it’s going to be somebody amazing,” Mendenhall said.

‘We do not have an exit plan’

Mendenhall said the first person to teach her this philosophy was her father, who started in real estate in 1974, guiding the industry through MLS books, moving to electronic lock boxes, implementing IDX policies, virtual office websites, and he is the 5th generation to operate their company in Boone County, Missouri.

One of his mottos was, “I don’t have an exit plan,” Mendenhall said.

“We do not have an exit plan for this association,” she said, mimicking her mentor. “I’m the 6th generation, and I want to make sure that this is ready for the 7th.”

Mendenhall connected with the audience on another personal note, mentioning her young nephews. “We’ve got to make sure that they can own a home,” she said, not wanting her nephews — or anyone else — growing up in a country of renters.

“I want to know that if they want to be a Realtor, that there’s an industry for them. And I believe that homeowners always are better with a Realtor professional by their side.”

The power of collaboration and innovation

Mendenhall’s father and mentor stressed to her the importance of collaboration and the fact that it doesn’t happen on its own. “We have to be collaborative with each other,” she said. “We cannot do this alone. These answers, these problems, these solutions, the opportunities are so much better when we take advantage of them” together.

We hear a lot of talk about professionalism, she said. “That conversation generally comes from us talking about what it’s like to work with the other person.

People have been attempting to solve this professionalism issue for the last 10 years, trying to figure out what it means, she said. Right now we have states starting legislation to define what it means to be a team. Other states are starting legislation in regards to advertising; others are increasing the continuing education requirements; some are increasing the barrier to entry … but it’s not enough, she said.

Members and associations are demanding more, so “we have to be absolutely laser-focused on what those goals and objectives are because none of these priorities are new,” she said.

“It’s not new that we want to increase the influence of and uncertain legislative and regulatory political environment — that’s always been one of our biggest strengths. Taking the management of real estate data to next level — not new.”

Ensuring the Realtor role stays essential and relevant is not new, either. But what has changed in our environment, she said, “is that success in achieving these has changed.”

Everyone is trying to make this industry better, but the conversations are changing because change is happening faster and faster, she said, “and we’ve got to make solutions one of our priorities.”

“This ain’t your daddy’s association anymore … and my daddy is here, and I think he would agree with me.”

In 2006, the state president of Missouri County asked if Mendenhall wanted to chair the legislative committee. “That’s not for me,” she said.

Taken aback by her refusal, the state president asked if she realized the difference she could make in that position. “Do you understand that a single piece of legislation will change this industry overnight?” she recalled him asking. “If you’re going to continue [on a] leadership path … you need to understand what it means to be in the legislative arena.”

Today, she said taking that position was one of the best decisions she ever made.

Fast forward to 2010 when she was president of the state association of the Missouri Realtors. The national association partnered with state and local associations to be proactive — to not sit back — and make change happen.

In that time, Mendenhall said she had never seen Realtors more excited, more engaged or more involved. She saw Realtors who had never attended meetings — they were all in. She saw change happen.

It’s that type of camaraderie and sense of community that creates victories.

Have real conversations about business and how your bottom line will be impacted. Those will be the conversations worth sharing; and when you do that, “you realize that you’re not just getting information — you’re meeting somebody who is excited, and you’re building a relationship” that could last a lifetime. You’re finding people, connecting with people who are of like mind. These are people who are going to “have your back,” Mendenhall said.

“You know, if people truly understood how much time and energy we’ve spent volunteering. I think they would think we were crazy. They’d say, ‘Why? Why do you do that so much? Why do you spend your night? Why did you miss your son’s soccer game?’ Why do you do that? Because you love it.

Mendenhall expressed her excitement to work with her team, and said they are all so excited to start the journey with everyone, share ideas and start relationships that will last a lifetime.

She leads by example, trusting in her partners, trusting in their ideas, collaborating and receiving input from everyone to make a difference and move forward faster.

“There’s only one way to avoid criticism: do nothing, say nothing or be nothing,” she said. Don’t let this year go by without doing something.

There was also speculation over whether the new leader should be a man or a woman. “I will tell you with Bob taking it home in 2018 … we have a leader who is thoughtful, he is caring, he is an industry expert, he’s an industry insider and he is a leader.

There are many critical moments that define our lives, she said. Moments where history was changed by owning it. “When that line in the sand is drawn — there will be a time when you’re going to have to make a decision — and I want you to own it.”

Mendenhall shared an anecdote about a terrifying (but hilarious, in hindsight) snowmobile adventure she had. She’d made the commitment to take a snowmobile ride up a mountain, and once you commit, there’s no turning back.

Determined to defeat her fear, she rode what she called the “death machine” about 10,000 feet up a Utah mountain. As scary as it was, she was in awe when she reached the top.

“I saw the most beautiful vistas that I have ever seen. Places that I would have never gone,” she confessed.

“I looked back at these tracks and I thought, those are the tracks that I made.” She realized she did it. She made it.

“Most of all, own your heart. Let someone in. Let them know that you’re here and that you care. Because when you do that, you can do anything. And don’t wait. This year will be over before you know it. Next year there’s going to be another group sitting here.

“Create your moment, and let’s go own it.” 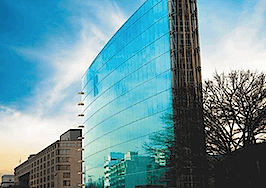 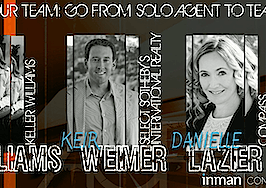 Growing your business: Going from solo agent to team