This week we can anticipate announcements around the Fed chair, tax reform and fresh September economic numbers. The 10-year has held the battle of 2.40 percent, and mortgages remain just above 4.00 percent, but odds favor them going up.

No, it’s nothing to do with Halloween, not that I know of. And it’s not so much spooky out there as loopy.

The credit markets are addled by the continuous flow of conflicting, weird and unprecedented information. Everyone is glued to the US 10-year Treasury note, as always, but in the past two weeks mesmerized by its yield rising toward 2.40 percent, a crucial spot touched in May and again in July, then retreating each time.

On Tuesday the 10-year rose above 2.40 percent, and traders were looking for big things to hide behind. On Wednesday and again on Thursday, it hit 2.46 percent, but there was no explosion. Friday it went back down to 2.42 percent. Makes no sense. Are we saved? Not until/unless we get back below 2.40 percent.

The immediate relief Friday followed a leak or rumor that Trump would choose Jerome “Jay” Powell for Fed chair. Powell would be almost as reassuring to markets as reappointment of Yellen. The other two candidates, Warsh and Taylor distinguished themselves in 2008 and 2009 by loud assertions that the Bernanke rescue was the wrong thing to do and would inevitably lead to bad inflation. Trump says he would like to put his own stamp on the Fed, but even he may grasp the Pottery Barn Rule: you break it, you own it.

Powell would reassure, but all other news is disturbing. Brent crude topped $60/bbl. The ECB announced the beginning of a long and slow taper of its bond-buying. Global stock markets are bonkers. On Monday, year-to-date orders for durable goods soaring 8.3 percent. Today, Q3 GDP revised up to 3.0 percent, and the GDP “deflator,” the Fed’s favorite measure of inflation rose from a Q2 dip to 1.7 percent  year-over-year.

But 10s and mortgages are holding. Sort of.

This week we can anticipate announcements around the Fed chair, tax reform and fresh September economic numbers. The 10-year has held the battle of 2.40 percent, and mortgages remain just above 4.00 percent, but odds favor them going up. 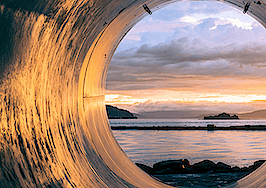