Real estate giant Zillow Group has been hit with an antitrust lawsuit alleging the company is restraining competition between real estate brokers by making deals with certain brokerages to hide Zillow’s home valuation estimates (“Zestimates”) on the brokerages’ for-sale listings. Whether the suit has legs is yet to be determined, but an antitrust attorney who spoke with Inman about the complaint said he is “not sold” on the claims.

Real estate giant Zillow Group has been hit with an antitrust lawsuit alleging the company is restraining competition between real estate brokers by making deals with certain brokerages to hide Zillow’s home valuation estimates (“Zestimates”) on the brokerages’ for-sale listings. Whether the suit has legs is yet to be determined, but an antitrust attorney who spoke with Inman about the complaint said he is “not sold” on the claims.

The details of the dispute, filed in New Jersey district court, are as follows: EJ MGT LLC, a New Jersey-based company that owns a multimillion-dollar property in Cresskill, New Jersey, filed the complaint on Jan. 15. EJ MGT put its property, 142 Hoover Drive, on the market in January 2017, but the property failed to sell. The complaint blames the Zestimate on the property’s detail page on Zillow.com, which put the property’s value at less than half of the listing price. 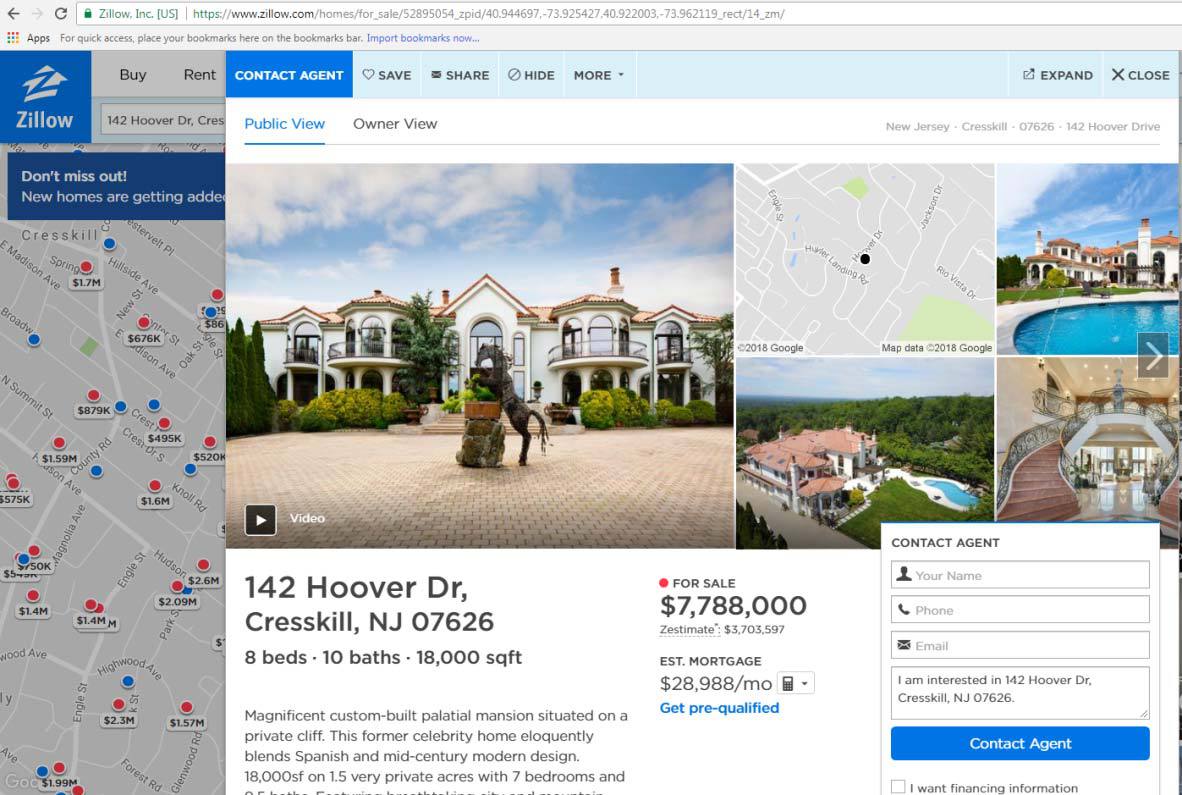 Screenshot from EJ MGT complaint against Zillow. This was still the property’s Zestimate as of Jan. 17, 2018.

According to Zillow’s website, its median error rate for homes in Bergen County where the Hoover Drive property is located is 4.7 percent. This means the Zestimate values for half of the homes are within 4.7 percent of the selling price, and half are off by more than 4.7 percent.

According to the complaint, EJ MGT asked Zillow to move the Zestimate further down the listing page to where it had seen Zestimates placed on the for-sale listings of some other brokerages, but Zillow refused and said its ability to conceal the Zestimate was subject to agreements between Zillow and certain brokerages. 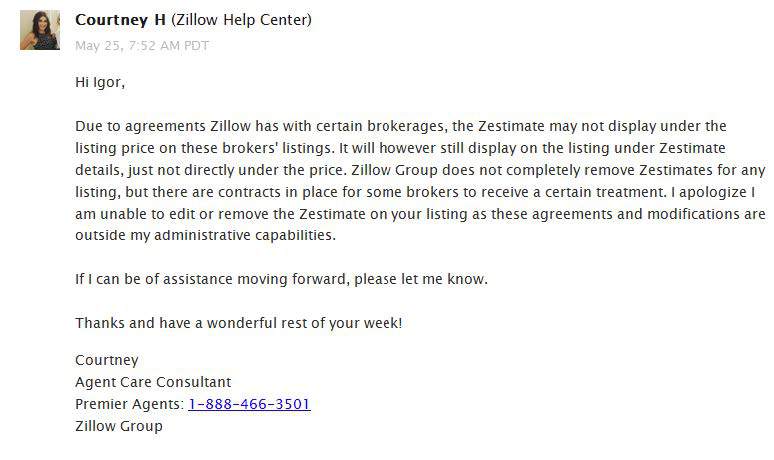 The complaint called these brokerages “co-conspirators” and identified them as Sotheby’s International Realty, Coldwell Banker Real Estate, Century 21 Real Estate, The Corcoran Group ERA, and Weichert Realty. All except Weichert are Realogy brands. None of the brokerages are included as defendants in the suit.

The complaint includes screenshots comparing how Zillow displayed a Zestimate for a particular property once it was off the market on Jan. 2, 2018 to when it was for sale with a Sotheby’s agent on Dec. 26, 2017. 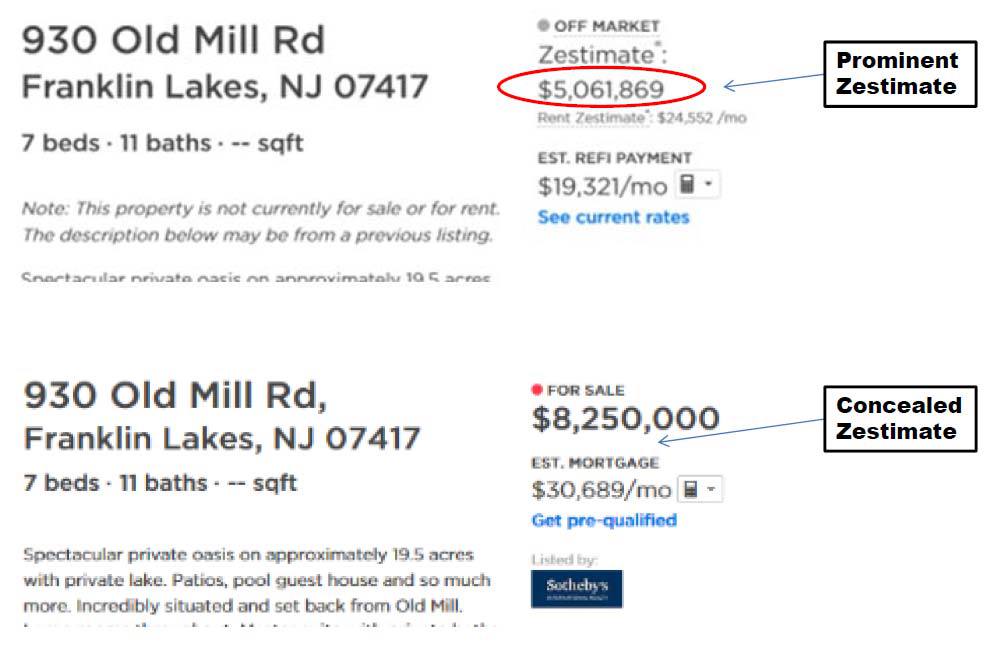 “…through illegal agreements, Zillow has conspired with the Co-conspirator Brokers to conceal the knowingly misleading and inaccurate Zestimates on the Residence Pages for their listings so that the Zestimate is not prominently displayed and not in frame when an internet user lands on a given Residence Page.

“Alternatively, Residence Pages for homes listed by (i) other brokers, (ii) agents who are not affiliated with the Co-conspirators (‘Unaffiliated Broker/Agent’), and (iii) individual home owners who have not hired agents affiliated with the Co-conspirator Brokers are left with no choice but to have the inaccurate or otherwise misleading Zestimates appear prominently on those Residence Pages.”

The five-count complaint alleges conspiracy to restrain trade under federal and state law, violation of the state’s consumer fraud act, slander of title and/or product disparagement, and interference with prospective economic advantage.

“We don’t discuss pending lawsuits, but can say that we believe the claims in this case are without merit,” Zillow spokesperson Kate Downen told Inman in an emailed statement. “We think the Zestimate is an important tool and starting point for consumers, and that’s why we include it for free on every home details page for every listing that we’re able to calculate, regardless of whether the home is on or off the market.”

Asked whether the complaint describes how Zestimates work and the mechanisms behind their display accurately and, if so, why Zillow allows brokerages to pay to have the Zestimate appear less prominently on their listing pages, Downen said, “We can’t discuss the details of the case, since it is in progress, and we typically don’t discuss agreements with partners.”

Zillow did not dispute the authenticity of the screenshots included in the complaint.

Asked to comment on the complaint and its accuracy and whether any Realogy brands had similar agreements with other third-party portals, Realogy declined to comment.

“[W]e are not going to comment on this litigation matter between other entities,” Realogy spokesperson Mark Panus told Inman via email.

Inman reached out to David Kully, an antitrust partner with the Washington, D.C., office of Holland & Knight LLP and a former attorney with the Department of Justice’s Antitrust Division, for his take on the case.

Kully told Inman via email he was “not sold by the attempt to cast this as a competition issue that gives rise to an antitrust claim.”

“Because plaintiffs who bring successful antitrust cases can collect treble damages, it is fairly common for companies that believe they are the victim of some business practice they regard to be unfair in some way to try to pursue antitrust claims, even when it is hard to say that any injuries they suffered were caused by a loss of competition. This seems like one of those kinds of cases,” he said.

“The plaintiff might not have been able so far to sell the house at the asking price because it is higher than the Zestimate, but I don’t see a connection between that and any impact that Zillow’s policies might have on competition among brokers.”

Kully doubted EJ MGT would prevail on the antitrust claims.

“Not only will it have trouble showing that the inability to sell the house at the asking price was caused by harm to competition (which it would have to do to establishing antitrust ‘standing’), I’m not sure I see how Zillow’s agreements with certain brokers prevents other brokers from competing to win listings,” Kully said.

“Even if the allegations are true and Zillow only moves the Zestimate display for certain favored brokers (that have paid it for that privilege), the practice harms competition in violation of the antitrust laws only if it effectively blocks other brokers from competing. That seems like it would be difficult for the plaintiff to prove.”

Due to the weakness of the antitrust claims, Kully didn’t think the resolution of the lawsuit would have any implications for the real estate industry, though he thought it was possible that the suit’s exposure of Zillow’s practice might cause Zillow to change it.

Meanwhile, Zillow continues to battle lawsuits on other fronts. The company was able to beat back another Zestimate-related lawsuit last year, but was hit with lawsuits from company shareholders alleging Zillow defrauded investors by misrepresenting its co-marketing program’s compliance with an anti-kickback law, the Real Estate Settlement Procedures Act (RESPA), thereby artificially inflating the real estate giant’s stock price.

Last week, another Zillow Group shareholder filed a complaint with similar allegations against the company and its board of directors, including breach of fiduciary duty, unjust enrichment, abuse of control, waste of corporate assets and violations of the Securities Exchange Act.

Zillow did not comment on the allegations in the latest suit, but noted it was still in settlement talks with the Consumer Financial Protection Bureau (CFPB) in regards to its co-marketing program’s compliance with RESPA. 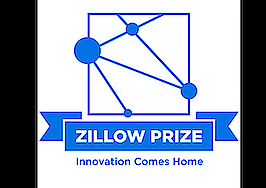 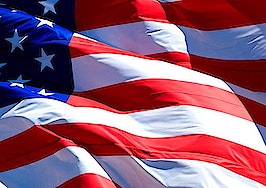 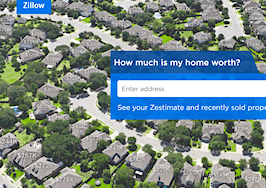 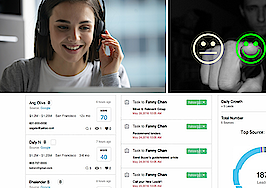