Tough week, tough day, and no way to sugar-coat. Long-term rates have broken out the top of five years of all-time-low rates, and only the stock market in free-fall has limited the rate damage…

Tough week, tough day, and no way to sugar-coat. Long-term rates have broken out the top of five years of all-time-low rates, and only the stock market in free-fall has limited the rate damage.

Mortgage rates today are 4.50% and may wander here temporarily before rising toward 5.00%, soon.

The speed of change in markets now is beyond usual measurement, and more important is a shock to civilians. Freddie Mac has surveyed mortgage rates weekly for almost 50 years, and its reports get top billing by the media. The survey weakness: Freddie collects data early each week and releases on Thursdays — yesterday’s finding of “4.22%” is a Jurassic Park classic, obsolete by a quarter-percent.

Not only the speed of change, but a complete foundational reversal from the mental conditioning of the last fifteen years. It has been almost that long since the Fed embarked on a tightening cycle, also that long since market professionals worried that the Fed was too slow, too late, and catching-up would cause a recession.

Early this morning two otherwise fine reporters on a national cable channel (nameless to protect their children) exchanged puzzlement: “The job data today is terrific… so why is the stock market down so far?”

If they are confused, consider the public. If you are aged 35 years, you have no adult experience with what is at hand, and coming.

The trouble with positive employment numbers

Today’s employment report was a blowout. Not just the 200,000 jobs added, but hourly wages rising from 2.5% year-over-year to 3%, and the upward gear-shift over a 60-day span coincident with the tax cut. The Fed let rates stay so low for so long despite solid economic growth and unemployment falling to 4% because wages were suppressed and so has been inflation. If wages are out of the box, the Fed cannot wait for inflation to follow.

In the ancient vocabulary, a “soft landing” is the objective of every Fed. That is, as an economic recovery matures to extend it by raising rates gradually, simultaneously inhibiting inflation while not over-doing the rate hikes. But, we never land softly; extended recoveries are a matter of accident. The Fed is always forced to choose between inflation-fighting and growth. Yesterday’s soft-landing prayers were based on job growth slowing to 100,000 monthly, roughly the growth rate of the work force, before a wage spiral begins among employers competing for scarce workers. Today, odds are not so good.

Will a *kerplunking* stock market stop the Fed? New Chair Jay Powell one year ago gave us a line which one day may rank with McChesney Martin’s wisecrack about the punch bowl: “It is not the Fed’s job to stop people from losing money.”

Adding to the Fed’s normal trouble with cyclical surprises like an accelerating job market is the absolute idiocy of a big tax cut at the mature end of a recovery. Nothing partisan: Democratic administrations have done the same.

Aside from unwanted economic stimulus, there’s the deficit issue. Fiscal deficits were justified to get us out of the Great Recession, or any recession. But now, weighing on markets and the Fed, our 2018 deficit will roughly double to $1 trillion as far as the eye can see, and just out of view the explosion in entitlement spending.

Human weakness in moments like this — mine, certainly — is to collapse all of the future probabilities above into the present. Stick with Stephen Hawking: “’Time’ is what keeps everything from happening all at once.”

As this situation unfolds over time, new data less certain than today’s, the key thing at the Fed: the tougher the Fed, the less long-term rates will rise. And that’s more important today than ever because this is the first mature recovery (ever) in which housing is NOT overheated. We are of course acutely sensitive to mortgage rates, but we are not what has gone sour.

An overheated labor market historically can be cooled only by rising unemployment. I don’t know how to accomplish that without adding housing to the sacrificial pyre, but I have some hopes that stocks this time take our place.

The most troublesome aspect of public policy today: the Fed is on its own, and has been since 2000. In 2000 we looked back on a federal budget in surplus, the great bipartisan achievement of Reagan, Daddy Bush, and Clinton. Since then… not a time to be proud of our democracy.

To make this memo fully depressing, there is another troublesome market move which could possibly (unthinkable) jolt national leadership to responsibility. I advise frequently not to pay attention to movements of the dollar in global markets. This time… rising interest domestic rates are the primary driver for any currency to rise in value. Our economy is hotter and our rates rising faster than any other nation. But the dollar has been sinking since mid-2017, and the Titanic since the tax cuts and future-deficit balloon.

That is a financial reaction, but there is more. Markets have mostly ignored US political turmoil in the last year, but we rely on the outside world to finance our deficit, new money and the rollover of existing debt. If the outside world begins to think that we are unable to manage our affairs, it can lose confidence in our IOUs.

This concern is not limited to the president or the majority party in Congress (although a Trump twitter fit at Chair Powell would hurt). The leadership of the other party is awful, too.

Concern for our deficit and leadership has come and gone since the 1960s. But the moment when global markets lose faith in a nation always has come as a surprise.

The US 10-year T-note in the last two years. The only chart “support” is at 3.00% back in early 2013, and we should not count on that holding. The only two things which will stop this increase: either a more aggressive Fed, or a stumbling economy: 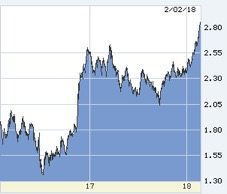 The Fed-sensitive 2-year T-note in the last two years — which today did not price-in an acceleration in the Fed’s plans for three hikes this year: 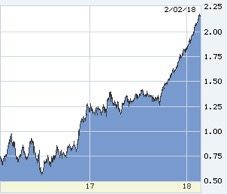 While praying, include a hope that the Atlanta Fed’s preliminary for Q1 2018 is a high-side mistake. It may not be: Q4 had understated GDP, 2.6% but consumer spending was pushing 4%: 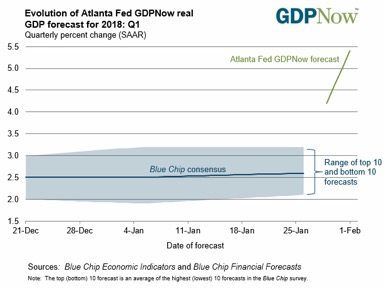 Another small plea while on your knees at bedtime: that the ECRI’s metrics are correct, and the economy is not overheating: 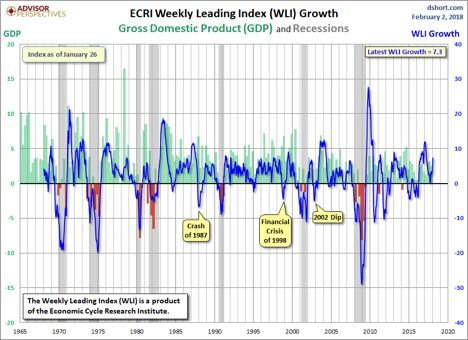