Tom Ritson on Unsplash
by Emma Hinchliffe
Share this article
You successfully shared the article.
Close

Now Purplebricks has officially launched in the Big Apple, nearly three months ahead of schedule, after securing $177 million equity investment in late March.

The flat-fee brokerage Purplebricks has already been growing rapidly, expanding from the United Kingdom to Australia and then California in the past four years, all with its eyes on America’s biggest metro real estate market, the Greater New York City area. Now Purplebricks has officially launched in the Big Apple, nearly three months ahead of schedule, after securing $177 million equity investment in late March.

The tech-enabled brokerage, which charges U.S. sellers a flat fee of $3,200 to list their homes, opened for business in the New York metro area April 3. Originally the company had said its service would be live in New York by June 30.

The New York launch is across New York City and in nearly a dozen surrounding counties in the state, in 15 counties in New Jersey, in Fairfield County in Connecticut and in Pike County in Pennsylvania.

The Tuesday launch starts with zero listings, Eckardt said, since agents haven’t been working for Purplebricks before launch day. But about 15 to 20 agents are signed up as an initial founding team. Purplebricks hired Halstead Property broker Robert DiBiase to serve as regional director for the tri-state area. Eckardt declined to say how many listings or agents the company expects to sign up in its new market.

The proposition for the New York market hasn’t changed from what Purplebricks has been doing in California since it launched in that state seven months ago. Agents will build out their own teams, and those teams will have exclusivity among other Purplebricks agents within their designated markets. The company hopes that prospect is appealing enough to attract legitimate agents who are already familiar with the complicated New York housing market.

For consumers, Purplebricks’ model could have greater value in the New York housing market. With high home values, paying a flat fee instead of a percentage commission would often offer larger savings. Sellers who list with Purplebricks get an agent assigned to their home and receive marketing materials. The $3,200 fee is paid when the home lists and is not refunded if the home doesn’t sell with the brokerage.

In these early days, Purplebricks’ main focus is building brand awareness in and around New York. The company has faced some trouble with brand perception in its markets abroad recently, with investor guidance in the U.K. that found that the startup only sold about half of the homes it listed compared to the 78 percent it had claimed — a claim that Purplebricks strongly denied — and fines over misleading advertising in Australia.

The U.S. model is different from the company’s U.K. and Australian models, largely because Purplebricks transactions in the United States still involve a commission paid to a buyer’s agent in addition to the flat fee for the listing.

The company has said it is considering Florida and Texas as possible markets to follow New York and California. Unlike many real estate tech startups, like Knock and Opendoor, which start out in lower-value housing markets like Atlanta and Phoenix, Purplebricks’ strategy is to go to the high transaction values first.

“We have the infrastructure in place, and it’s scalable now to move across the U.S.,” Eckardt said. 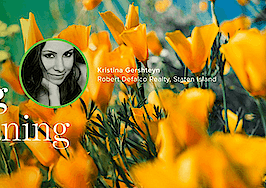