Mohit Singh on Unsplash
by Gill South
Share this article
You successfully shared the article.
Close

Three big New York players — Douglas Elliman, Compass and Engel & Völkers — have been quietly growing their presence in Boston over the past month to take advantage of a market increasingly known for being grounds for tech, innovation and luxury lifestyle offerings.

Three big New York players — Douglas Elliman, Compass and Engel & Völkers — have been quietly growing their presence in Boston over the past month to take advantage of a market increasingly known for being grounds for tech, innovation and luxury lifestyle offerings.

Engel & Völkers just set up three new shops on Boston’s South Shore after Sheri Sibley franchised her company, Vantage Point Realty, with the brand. Her company’s offices will now be known as Engel & Völkers Duxbury, Engel &  Völkers Norwell and Engel & Völkers Plymouth after their respective Boston neighborhoods. At the same time, Douglas Elliman, whose acquisition of Boston brokerage Otis & Ahearn closed in February, is bringing on some major players from the local market.

Compass, meanwhile, is about to open its fifth office in the greater Boston area, the latest in Wellesley, Massachusetts, which was named the seventh wealthiest city in the U.S. by the American Community Survey.

The attraction for Engel & Völkers was Boston’s growing tech scene and cutting-edge health care and biotech industries that are bringing in buyers from around the country, said Anthony Hitt, president and CEO of Engel & Völkers Americas in a company statement.

“Boston’s presence as a global hub for technology and innovation is certainly growing,” Sibley told Inman. The market was showing no sign of slowing down, she said. “As one of the largest markets for biotech and medical innovation, we’re  seeing new clientele from all over the country — and all over the world — moving to the Greater Boston area and investing in our real estate market.”

“Wellesley is an exciting market for Compass to expand into and a market that we have been preparing since we launched in Boston in 2015,” said Jeffrey Heighton, General Manager of Compass Boston in a prepared statement.

Douglas Elliman, now with three offices and 40 sales associates in Boston from the Otis & Ahearn acquisition, has just signed on two senior agents, Pamela Cushing and Haley Cutter, the co-founders of boutique brokerage Live in Luxury. The pair, who bring two bilingual agents in French and Russian with them, specialize in some of the city’s most exclusive residential properties, and will now be operating under the brand name Live in Luxury Real Estate at Douglas Elliman.

“We are excited to be strengthening and growing our team here in Boston with some of the best talent in the marketplace,” said Kevin Ahearn, CEO of Douglas Elliman’s Boston division in the company statement. “Pamela and Haley have a wonderful reputation for their extensive local knowledge, high level of customer service and their unwavering commitment to excellence.”

One of the reasons Douglas Elliman appealed to Cushing and Cutter was its association with the international real estate firm, Knight Frank, said Cushing.

“We believe Douglas Elliman’s goals are two-fold — one to increase and grow the brokerage’s re-sale side of the business, the other piece is the new development, new construction business in Boston,” Cushing told Inman.

“Boston is definitely a growing marketplace with many new developments,” added Cutter. The Seaport District in Boston, a waterfront stretch with restaurants, bars and hotels, is “exploding,” as is downtown, she said.

Live in Luxury, based in downtown Boston since launching in 2014, serves both sellers and renters in Boston’s “sought-after” neighborhoods, the inventory ranging from historic brownstones to luxury developments including Millennium Place and Millennium Tower.

Cushing and Cutter said they would like to cater more to empty-nesters in the Boston suburbs looking for a change or additional housing.

Cushing, who moved from the suburbs into Boston downtown herself a few years ago said: “A lot of people from Boston suburbs, empty-nesters want to come into the city — it may be for their second or third home. We also have clients who come from California, New York or Florida.”

These big New York real estate brands are coming into an extremely low inventory market, said Cushing. There is one month’s supply of inventory at the moment and relationships between well-established agents are crucial, she said.

“It’s so important that all of our agents are out and fostering relationships. Once a property has hit the MLS at a certain price point, it’s old news. We have to keep our finger on the pulse in the market and have great relationships,” Cutter said. 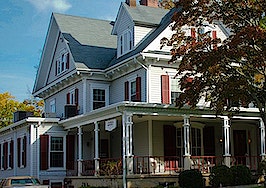 Massachusetts ranked as safest state in the country