NeONBRAND on Unsplash
by Marian McPherson
Share this article
You successfully shared the article.
Close

According to Houzz’s 2018 House and Home report, homeowners aren’t shelving their renovation plans — 51 percent of homeowners are planning to begin or continue projects this year.

According to Houzz’s 2018 House and Home report, homeowners aren’t shelving their renovation plans — 51 percent of homeowners are planning to begin or continue projects this year. Although long-term homebuyers are leading the way in home updates (57 percent share), recent buyers have increased their home renovation market share by 0.7 percentage points year-over-year to 13.4 percent. 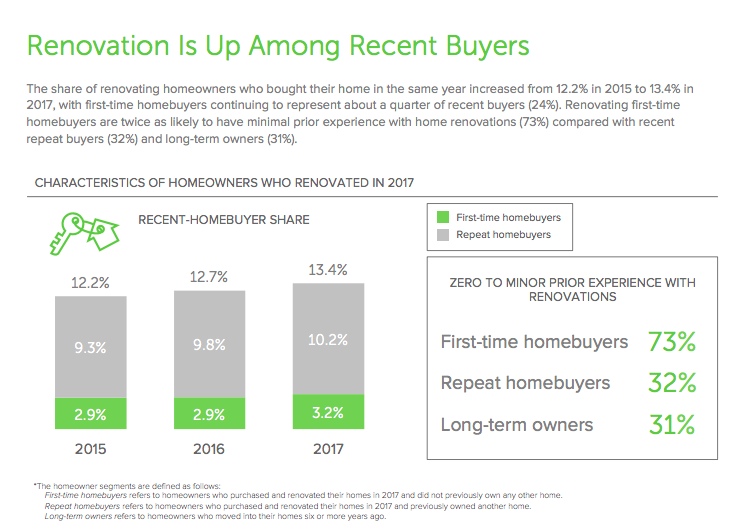 Once again, kitchens (31 percent) and bathrooms (27 percent) were the most popular interior remodeling projects, followed by master bathrooms (24 percent), which replaced the family/living room as the third most popular renovation project.

“All of the evidence from our research points to 2018 likely being another robust year for the home improvement industry,” said Houzz principal economist Nino Sitchinava, Ph.D., in a press release. “Recent buyers and long-term homeowners alike are keen on investing in major projects.”

“Kitchens and bathrooms continue to fuel spend, while exterior features and systems, such as home security and automation, are on the rise,” Sitchinava added. 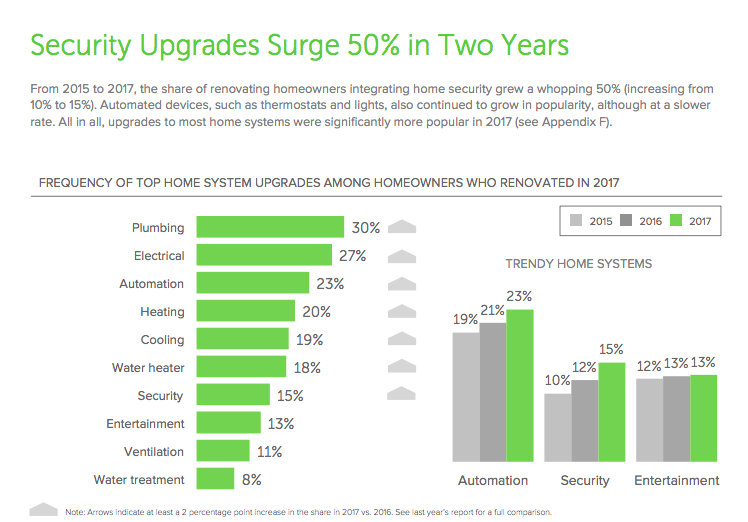 Much like last year, homeowners have paid special attention to upgrading their automation, security and entertainment systems. Plumbing (30 percent), electrical (27 percent) and automation (23 percent) were at the top of owners’ lists this year, but Houzz noted there’s been a boom in security system upgrades.

Over the past two years, the report says, the share of renovating homeowners investing in a home security system (10 percent to 15 percent) has increased by 50 percent. 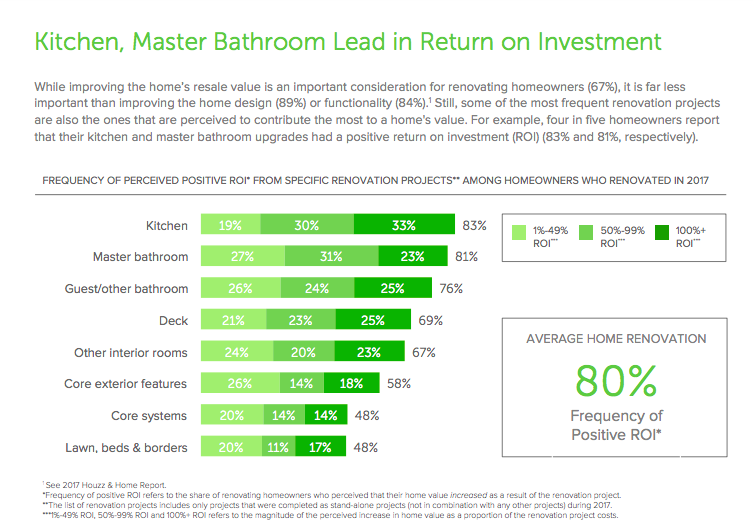 Beyond an increased focus on home security, homeowners are increasing their kitchen and master bedroom renovation budgets.

So what’s the deal with these jumps in spending? According to Houzz, kitchens (83 percent) and master bathrooms (81 percent) offer the highest return on investment (ROI) when it comes time to sell. Thirty-three percent of homeowners reported a 100 percent ROI on their kitchen upgrades, and 23 percent of homeowners were able to say the same about the changes they made to their master bathrooms. 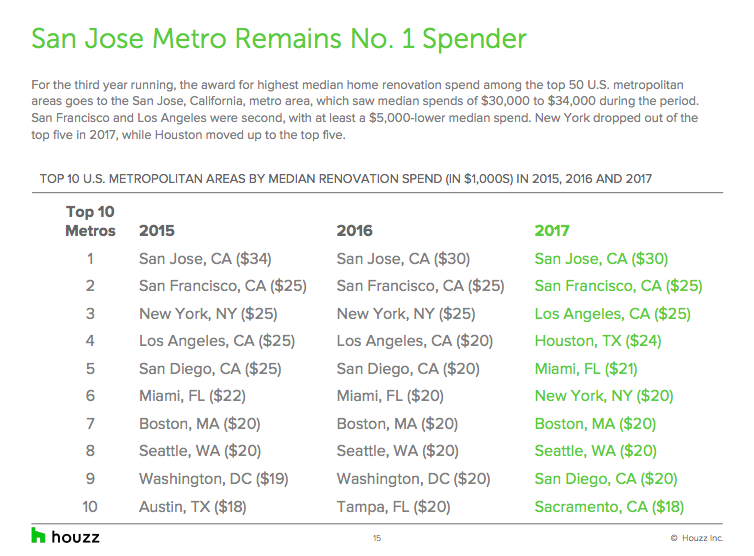 On the metro level, Californians tend to spend the most on home renovations. For the third consecutive year, homeowners in San Jose really rolled out the dough with a median home renovation spend of $30,000 — double the national average. San Franciscans and Los Angelenos weren’t far behind with average spends of $25,000.

Sitchinava says the boom in spending, especially in Houston and the Nor-Cal markets, is due to the number of wildfires and hurricanes that happened over the past year. For example, 6 percent of homeowners in California said their renovation project was a result of natural disaster damage, a 2 percentage point increase from 2016.

“Houston’s rebuilding activity has brought the city’s median renovation spend up to one of the highest in the nation, while coastal cities maintain nearly double the median national spend,” she said. “We expect the momentum to continue in 2018.”

About the Houzz & Home survey

The annual Houzz & Home survey is the largest survey of residential remodeling, building and decorating activity published. The survey covers a wide range of renovation projects in 2017, from interior remodels and additions to home systems, exterior upgrades and outdoor projects. Data gathered includes historical and planned spends, professional involvement, motivations and challenges behind building, renovation and decorating projects, as well as planned activities for 2018. The 2018 study includes nearly 150,000 respondents in the U.S. alone, providing insights into the home improvement activity of the more than 40 million monthly unique users of the Houzz site and mobile apps.

The Houzz & Home Survey was sent to registered users of Houzz and fielded in March-April 2018. 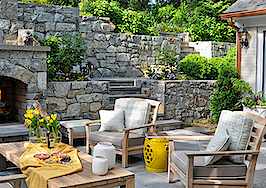 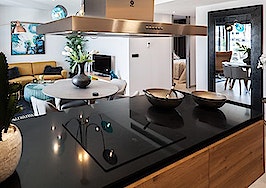