Asoggetti on Unsplash
by Brad Inman
You successfully shared the article.
Close

This month is the 10-year anniversary of the global economic collapse. Lehman Brothers filed for bankruptcy on Sept. 15, 2008, and the world changed forever.

A few weeks ago, I had lunch with a Realtor who lost almost everything in the last real estate downturn: his business, his credit, his customers — even his wife.

“All I held onto was my house, thank God,” he said. “I believed it would all last forever. I was all in, living large,” he said.

Like Warren Buffet famously said, “Only when the tide goes out do you discover who’s been swimming naked.”

This month is the 10-year anniversary of the unforgiving global economic collapse. Venerable Wall Street investment bank Lehman Brothers filed for bankruptcy on September 15, 2008 and the world would never be the same again.

These events created economic havoc for hundreds of millions of people, businesses small and large and private and public institutions. About 8.7 million jobs were lost, unemployment soared, retirement funds were decimated and house prices plunged by as much as 50 percent.

The best real estate professionals survived or came back after being hit hard. But it was a tough time, a once-in-a-lifetime economic downturn for many.

Many people became jaded and distrustful of our institutions and its leaders.

Minnesota real estate agent and Inman contributor Teresa Boardman wrote on Facebook about that period, “I lost my confidence in our economic system and our system of governance.”

At the time, Inman had a front row seat covering events leading up to and during the collapse.  Not a fun story. As we began to ask the difficult questions, things just didn’t add up. And it was easy to be fooled by the experts.

Before the crash, NAR chief economist David Lereah published a book Are You Missing the Real Estate Boom? Why Home Values and Other Real Estate Investments Will Climb Through The End of The Decade – And How to Profit From It.

He was paraded around by the trade group as the preeminent real estate forecaster and industry booster. Then, as quickly as fame found him, Lereah went from guru to lummox, panned for his previous economic bluster when the market tanked.

NAR learned a lesson, its current economist Lawrence Yun is more of a reasoned skeptic than a careless market champion, and as a consequence more credible.

In January of 2007, I had an “aha” moment about what was about to split wide open.

At Inman Connect in New York that month, we had a panel of Wall Street analysts talking about mortgage backed securities, mostly bulls chatting up the magic of home loan securitization.  That was before even the “Big Short” protagonists from Michael Lewis’s award winning book knew exactly what was about to unfold.

For those too young to remember, the housing market was as euphoric as a Lady Gaga concert.

During that Connect panel 11 years ago, one Wall Street expert dropped a zinger. His spreadsheets were showing a rise in late mortgage payments by homeowners in Nevada, Florida, Texas and California — all oversized housing markets.

I cornered him later and he promised to share his explosive late payment documents, which I gave to my editor Matt Carter, a hard nosed journalist who would not drop a controversial story until it saw the light of your computer screen.

He was skeptical of the housing boom and read all of the doomsday housing bubble blogs that predicted early on that the real estate market was going to collapse. Some eccentric characters among that group, for sure, but all of them had it right in the end.

Finally that day, the human dimension of the brewing economic calamity was in front of me. A hotel service worker who was clearing the chairs came up to me for advice. He and his two brothers had purchased three properties in New Jersey and were planning to buy more. He told me they had put nothing down for the homes, so they were sky-high leveraged with short-term adjustable-rate mortgages and rising payments.

“What do you think,” he asked.

The Chinese funded our folly

A few days later I returned to my home in Sausalito California. There, I relaxed and watched the big Chinese shipping vessels navigate through the Golden Gate. The watermarks on the boats were very low when they docked at the Oakland Port and very high when they traveled back to the Orient. They were packed with goods coming to the US and empty going home.

China was one of the biggest investors in subprime mortgages, which financed Americans buying lots of stuff through home loan credit lines that were approved in minutes.

These three stories added up to a short essay The Subprime Tsunami, that I wrote on Inman in January, 2007.  Inman editor Matt Carter followed up in March of 2017 with a seminal four-part series, Subprime Tsunami Threatens Housing Market.

From my 2007 essay: China, refis and depreciated stuff

China is creating wealth at record levels. Its central bank has invested more than $1 trillion in U.S. Treasuries and mortgage-back securities, making it the largest investor in MBSs. The fastest-growing piece has been subprime loans.

Wall Street figured out it could make a mint off mortgages and began packaging them as fast as the Chinese are building high-rises in Shanghai.

But the supply is constrained, so the Street is pushing originators to make more home loans, as they have plenty of investors like China

Promoting home ownership to “everyone” became the rallying cry of President Clinton, President Bush, Congress, the Realtors, the home builders, mortgage bankers and the average bus boy who until now could not afford to buy a house.

The plan was risky, nothing-down loans, low-cost ARMs and loose underwriting. The subprime mortgage market became the formula for the biggest property-ownership push since the Homestead Act. Driven by a  fireball of greed.

Add careless underwriting on refinancings and credit lines. The money that came from China to make more loans goes right back to the Chinese shores as consumers buy depreciating assets like cars, barbecues, clothes, toys and all sorts of stuff.

Now the hangover: the upside-down homeowner. Mortgage payments for many homeowners are doubling. Inflation covered up risky loans to unqualified home buyers for awhile, but not anymore.

This is how the subprime tsunami will work. The ocean recedes, people run to the beach and go WOW, then the big wave destroys them and the property behind them.

Lessons from the meltdown

I posted this on the Inmanville Facebook Group last week, “10-year anniversary of the global economic meltdown. What did you learn from the subprime tsunami?” More than 100 people left comments. Here are 10 lessons that summarize everyone’s advice.

Jean Moussavian Keane Save your money.

Katie Francis Minkus  That winter is coming and those in commission sales should be saving their cash, instead of buying a new car.

3. Wary of the experts

David Fleming Ignore the advice and opinions of anyone who doesn’t work on behalf of your clients — lenders, title closers and clients’ families — these non-fiduciary “financial advisors.” Their interests are supposed to be aligned with our client’s. Wrong.

Michael Daly  When something is too good to be true, it usually is.

Jennifer Johnsen Cameron Live below your means and diversify your investments. Then wait for opportunity because if you have cash when things bottom out, there is much of it.

Chavi M. Hohm The main reason we catapulted to the top 10 in our company is because of the recession. Resilience, take advantage of the market in front of you and invest heavily in marketing when others are retreating.

9. It is about value you create

Paul Kaplan Work your brand to show your value proposition and staying power regardless of market conditions.

Tony Vitale  There’s a silver lining to everything, if you look close enough. 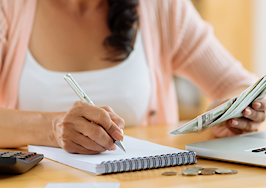 Mortgage rates continue their ascent onward into mid-October
Back to top
The best event in real estate kicks off next week! Tickets are selling quickly.Register Now×
Limited time: Get 30 days of Inman Select for $5.SUBSCRIBE×
Inmanpot
Log in
If you created your account with Google or Facebook
Don't have an account?
Create an Account
Forgot your password?
No Problem