Elena Schweitzer on Shutterstock.com
by Patrick Kearns
Share this article
You successfully shared the article.
Close

After four straight years of declines, the nation’s longest inventory slump in history has finally come to an end, according to the latest data from realtor.com. Housing inventory was up 2 percent — or 25,000 listings — October 2018, versus October of last year.

“Buyers have been struggling for four years to find homes in their price range while dealing with bidding wars and multiple offer situations,” Danielle Hale, chief economist for realtor.com said. “The inventory increase will not solve the problem overnight, but it should provide some relief to those still in the market, especially if the growth we’re seeing in more affordable homes and condos holds steady.”

Realtor.com’s “in history” claim is a lofty one, and the home search portal run by News Corp.’s subsidiary Move Inc. has data only going back four years. But a spokesperson tells Inman that the claims are supported by the 20-year-plus dataset from the National Association of Realtors (NAR), the 1.3-million member trade organization that licenses the realtor.com name to Move.

That uptick in houses on the market is being felt in major markets nationwide. This month, 26 of the 45 largest markets in the United States saw year-over-year inventory increases, up from 22 markets last month, according to realtor.com. The metro areas of San Jose, Seattle, San Francisco, San Diego and Nashville saw the biggest gains, with all posting greater than 30 percent increases in inventory, year-over-year.

Growth is stronger in urban sectors: 45 of the nation’s largest markets posted an average 6 percent increase year-over-year, higher than the national rate of 2 percent.

Despite the increase in inventory, affordability is still an issue according to Hale, with “increasing mortgage rates and prices keeping many would-be buyers on the sidelines.”

The median listing price in October remained at $295,000, a 7 percent increase year-over-over, but down from last year’s 10 percent increase by the same metric. Homes are still selling at a rapid pace, despite the increased inventory, with the average home selling in 68 days, five days faster than last year.

The new listings that are hitting the market are, on average, 8 percent cheaper than existing inventory and 10 percent smaller. 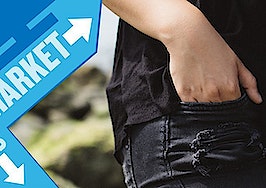