The U.S. Treasury Department is expanding previous regulations to more U.S. counties and lowering the sales price threshold for reporting.

Identifying cash buyers of luxury real estate has helped ferret out illicit activity so well that the U.S. Treasury Department is expanding previous regulations to more U.S. counties and lowering the sales price threshold for reporting.

The changes mean the identities of buyers of almost all cash purchases in some counties will have to be reported to the Treasury’s Financial Crimes Enforcement Network (FinCEN).

In January 2016, in an effort to combat money laundering, FinCEN announced title insurance companies would be required to identify the human beings behind any cash-paying “shell companies” that buy high-end residential real estate in New York City and Miami at or above certain million-dollar price points.

Other “geographic targeting orders” (GTOs) put out by the department have expanded the list of affected markets and price points since then and earlier this month, the department issued its most widespread order yet. The order is effective Nov. 17, 2018 through May 15, 2019.

Now, title insurance providers in these areas are required to disclose the people behind any buyer companies for any all-cash transactions of residential real estate at or above $300,000:

Given that the median sales price of a home in many of these counties is well above $300,000, that means virtually all cash purchases of homes in those areas will have to be reported to FinCEN. 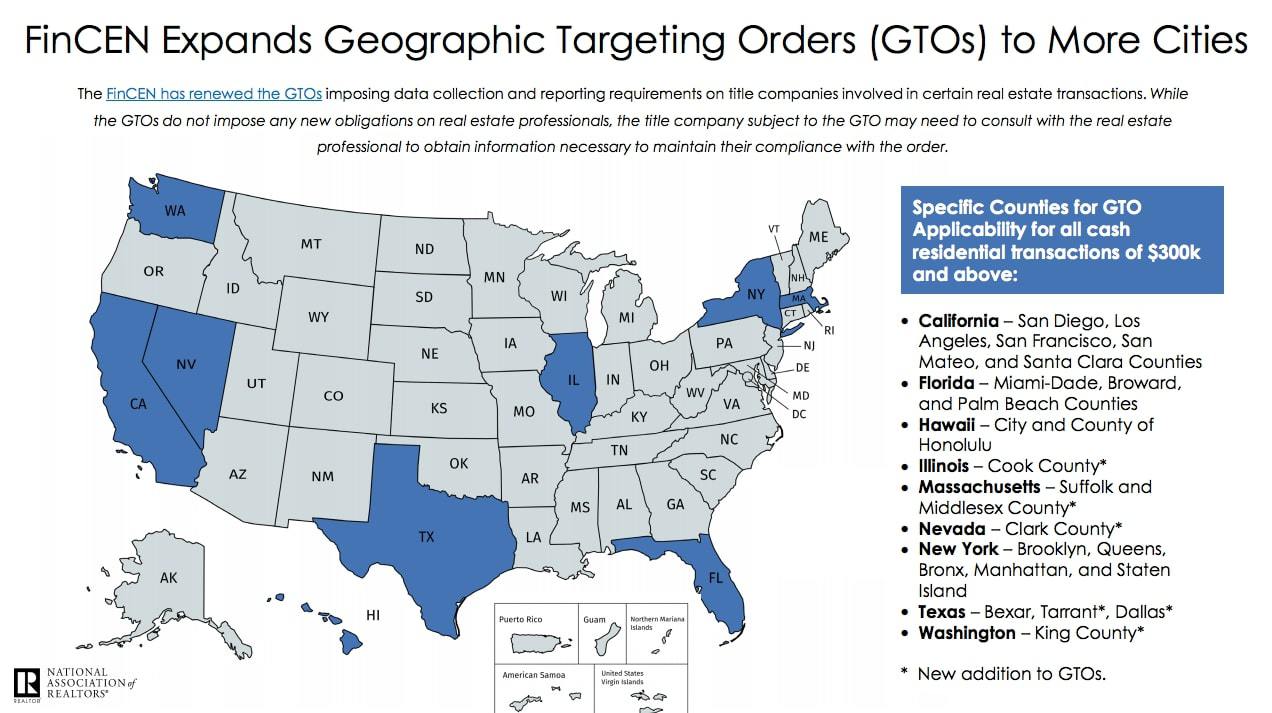 “Reissuing the GTOs will further assist in tracking illicit funds and other criminal or illicit activity, as well as inform FinCEN’s future regulatory efforts in this sector.”

In the program’s first year, around one-third of all transactions reported to the government tied the sale to a suspicious person, Mansion Global reported.

As part of the program, title insurance companies have to obtain and record a copy of an individual buyer’s driver’s license, passport, “or other similar identifying documentation,” according to a FinCEN FAQ.

The Treasury department is also now requiring that purchases using virtual currencies be reported. Purchases made without a bank loan or other, similar type of external financing and are made, at least in part, “using currency or a cashier’s check, a certified check, a traveler’s check, a personal check, a business check, a money order in any form, a funds transfer, or virtual currency” must be reported, according to the FAQ.

The trade group also noted that the order should not affect real estate transactions or closing timelines because title companies are required to report GTO-covered transactions to FinCEN within 30 days of the closing.

“The GTOs are helpful to FinCEN’s efforts to crack down on money laundering and the financing of terrorism through various illicit enterprises including foreign corruption, organized crime, fraud, narcotics trafficking, and other violations,” NAR said.

“NAR continues to be helpful and support these efforts, but opposes any mandatory reporting regulations on real estate professionals that would prove burdensome and unnecessary given the existing anti-money laundering regulations that already apply to U.S. financial institutions.”

“Once the threshold is as low as $300,000, why have a threshold at all? One might think that money-launderers involved in gangs, drugs, etc. might buy and sell cheap properties right in the turf where they are doing business,” he said.

Landis also noted that title companies’ role as gatekeeper is a loophole for enforcement of the order. “Someone could run a title search but not purchase title insurance or fund through a title company,” he said.

Homebuyers who use limited liability companies to purchase are not necessarily up to something nefarious, but may use an LLC for privacy or tax purposes. Landis anticipates the new order may result in more co-op purchases because “co-op purchases usually don’t involve title insurers. Do co-ops become more attractive again for boldfaced names?”

In a Facebook thread, the new order elicited both positive and negative reactions from industry pros.

Illinois Realtor Al Rossel wrote, “Not a surprise. Went to pay my visa bill in cash and had to show an ID with the bank.”

But Scott Forcino, a New York associate broker, said he completely disagreed with the new rule.

“A few bad apples can’t ruin a business approach for all,” he wrote. A “municipality requiring the members of an entity to be identified” is “intrusive,” he added.

Daren Hamilton, president of a Washington escrow firm, wrote, “Acquiring property through an LLC and concealing one’s identity can also be a personal safety issue and/or help preserve the peaceful expectations of those who live near the famous, infamous or imperiled.”

Washington broker and Inman contributor Sam DeBord replied that a balance was likely needed “to identify, yet not publicize, the true purchasers.”

FinCEN’s order requires identification to federal law enforcement, but the government has stymied attempts by journalists to gain access to the data through public disclosure requests, the Seattle Times reported. 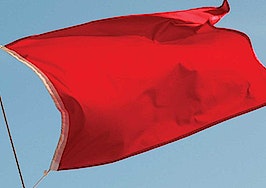 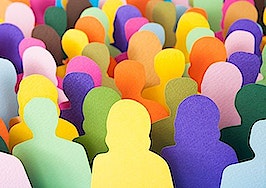 4 tips to prepare your cash buyer clients for FinCEN regulations 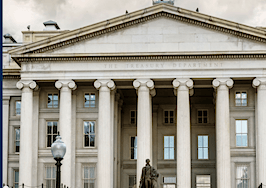