by Gabriela Barkho
Share this article
You successfully shared the article.
Close

Investors on Wall Street may be skeptical, but Zillow is not slowing down when it comes to buying homes directly from consumers. The Seattle-based tech giant today announced that its Zillow Offers cash homebuying service is coming to Dallas, Texas, sometime in 2019.

The service, which initially launched in April 2018 and is part of a growing wave of competing services and companies known as iBuyers, lets prospective homesellers in select markets visit Zillow’s website, enter in their home address and details about the property they want to sell, and receive a quote for an all-cash offer from Zillow in as few as 48 hours.

That brings Zillow Offers to a total of nine markets nationwide: it’s already operational in Phoenix, Las Vegas, Atlanta, Denver, and Charlotte, and has announced expansions to Raleigh, Houston and Riverside, California in the coming year.

“In eight short months and in just five markets, Zillow Offers has helped thousands of consumers reduce the stress and uncertainty that typically go along with selling a home,” said Zillow Brand President Jeremy Wacksman in the announcement. “With today’s announcement, we’re poised to deliver this exciting service to sellers to help them sell their home with greater control, ease and on their timeline – in one of the nation’s most dynamic markets.”

As in its other markets, Zillow will use local real estate agents who are customers of its Premier Agent advertising program to present competing competitive market analysis reports (CMAs) for what a seller’s home could fetch on the open market alongside Zillow’s cash offer quotes. Sellers who choose not to take Zillow’s cash offers and instead list their home on the market will be connected with one of Zillow’s Premier Agent partners.

Local real estate agents will also represent Zillow as seller’s agents when the company turns around and re-lists the homes it has purchased directly from consumers back for sale on the open market again.

Zillow Offers’ move into Dallas turns the Texas metropolis into yet another battleground for iBuyers. Competing online cash-offer based services from startups Opendoor, Offerpad, and Knock are already live or coming soon to the city, though the real estate market there is seeing a slowdown, and Opendoor for one pre-emptively lowered the ceiling on the upper-limit it is willing to pay for homes there.

Zillow has not yet announced which agents or brokerages it will partner with in Dallas yet, but interested agents can join the company’s “interest list” here. 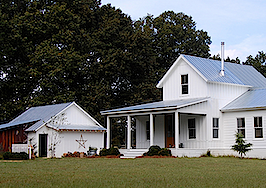