In a new survey from Clever Real Estate, millennial respondents said they’re planning to buy a house within the next 12 months — and many of them are considering homes that’ll save them money in unconventional ways.

While it’s been confirmed by numerous studies that millennials are now officially in the market to purchase their first homes (and perhaps their first move-up homes), new research shows that some will take the plunge somewhat differently than preceding generations.

In a survey of 1,000 people, Clever Real Estate found that millennials aren’t afraid to get their hands dirty, nor are they scared of becoming landlords right out of the box. What they are, however, is money conscious.

The 517 millennial respondents all said they’re planning to buy a house within the next 12 months. Two-thirds (a whopping 68 percent) said they’d be willing to put in an offer on a place that needed major work; and more than half (52 percent) would consider investing in a multifamily property — these considerations taken into account for the purpose of tackling affordability issues.

About these millennial buyers

Clever Real Estate, a nationwide company that partners with “top-rated” local agents willing to list houses for a flat rate of $3,000, no matter the asking price, undertook the study to get a handle on just who these millennial buyers are.

“Like most everyone, we were struggling to understand the illusive millennial, so we put together a survey to figure out who they really are,” Tommy O’Shaughnessy, the firm’s research analyst, told Inman. “And we found out that, in some ways, they couldn’t be more different than their predecessors in terms of their values, expectations and methods.”

Take fixer-uppers, for example. In the name of affordability, millennials are willing to take on major home improvement projects, if not right away, at least over time on a piecemeal basis. As long as they can occupy the place right away, they seem willing to live with the inconvenience that comes with faulty air conditioning, squeaky floors and stuck windows.

But analyst O’Shaughnessy points out in his report on the survey findings that these young, inexperienced buyers may be shooting themselves in the foot if they don’t have adequate savings or, I might add, the experience and ability to do a lot of the work themselves.

He cites a Home Advisor report that the average cost to remodel a bathroom was $9,742 last year, whereas a kitchen remodel ran $22,145. By the way, that same report found that millennials are more likely than other generations to remodel, and as a group, had actually completed the most renovations over the previous 12 months.

Also in the name of affordability, they’d consider purchasing a duplex, triplex or even a four-unit structure so they could make ends meet. Indeed, 9 percent said they “were interested” in renting for the passive income rentals generate.

“For some, this could even be seen as a path to overcoming obstacles to homeownership” with passive income being applied to mortgage payments and repairs, the report notes.

This could get people into trouble if they don’t have the makeup to adequately identify quality tenants, the ability to fix things without hiring expensive contractors, the patience to deal with unruly tenants and the fortitude to evict those who fail to pay their rent.

Here are some other tidbits from Clever’s “illusive millennial” study: 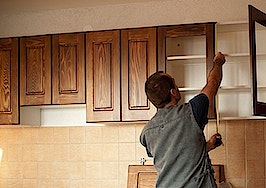 11 red flags that you’re getting off track in your real estate business
Back to top
Only 3 days left to register for Inman Connect Las Vegas before prices go up! Don't miss the premier event for real estate pros.Register Now ×
Limited Time Offer: Get 1 year of Inman Select for $199SUBSCRIBE×
Inmanpot
Log in
If you created your account with Google or Facebook
Don't have an account?
Create an Account
Forgot your password?
No Problem