Compass CCO Matt Spangler reached out to departing Uber staffers on Twitter as the company seeks to build engineering and product development teams.

One man’s layoffs are another man’s treasure. That seems to be the guiding principle of Compass Chief Creative Officer Matt Spangler’s hiring strategy as he tries to fill a rapidly expanding list of engineering, marketing, and product development positions at the New York City-based brokerage.

Ride-hailing company Uber on July 29 cut its 1,200-person international marketing staff down to 800, citing the need to cut costs and streamline its operations after going public in May. The layoff spurred a number of Twitter threads with job listings from tech startups and tech giants across the country, one of which Spangler replied to, as first reported by The Real Deal. 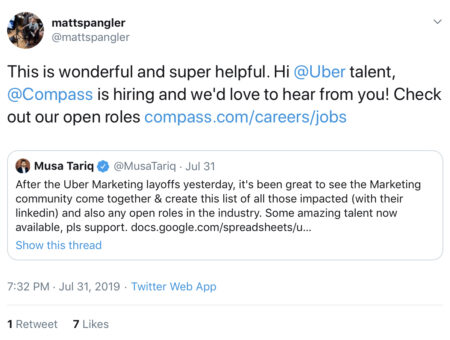 “Hi, Uber talent, Compass is hiring, and we’d love to hear from you,” he tweeted. “Check out our open roles.” Inman reached out to Compass for an update on how many ex-Uber employees have taken Spangler’s offer, but they weren’t available for comment.

Uber’s decision to lay off a sizable chunk of its marketing staff is perfect timing for Compass, who secured $370 million in Series G funding on July 30 and recently opened a new office in Seattle solely dedicated to the company’s engineering and development goals.

Compass is earmarking a majority of the funds for product development and the August launch of a redesigned consumer search and app experience.

“It has been incredible to see the growth of our product and engineering team, including the addition of Joseph Sirosh as CTO,” Compass Executive Chairman Ori Allon told Inman in July. “We are excited to partner with new investors, and deepen our relationship with our existing partners to accelerate our growth and further our technology advancements.”

This isn’t the first time Compass has cherry picked talent from other established tech companies, which includes the recent on-boarding of former Microsoft executive Joseph Sirosh as the brokerage’s new Chief Technology Officer.

Compass has also wooed talent from companies outside the real estate sphere such as Google and McKinsey, and has been scrutinized for its recruiting tactics within the industry, which NRT CEO Ryan Gorman likened to “shoplifting.”

But, there are no apologies from Compass CEO Robert Reffkin for his hiring tactics. On the Inman Connect Las Vegas stage, Reffkin said competitors have two choices: spread “rumors and fear,” or “…focus on your business, and you know, build a better company.”

The hiring spree will likely continue, with Reffkin announcing that Compass plans to “double down”on its dream of creating the ultimate end-to-end platform.

“We’re going to accelerate our growth in two key areas — one is product and engineering,” Reffkin told CNBC. “And we’re going to double down on our core products.” 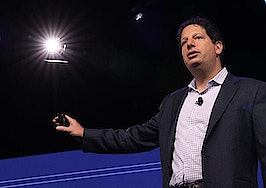 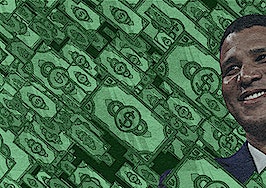 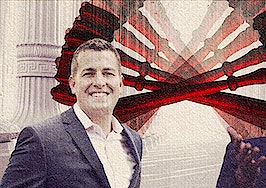