The company’s revenue jumped a whopping 88 percent year-over-year during the final three months of 2019. Here are some key stats worth paying attention to.

Online brokerage, iBuyer and portal Redfin reported its latest quarterly earnings Wednesday, and the takeaway was that for the final three months of 2019 the company handily beat analysts’ expectations.

More specifically, Redfin’s revenue shot up 88 percent year-over-year during the final three months of 2019 — far more than the not-quite 75 percent analysts had forecasted. The numbers are a coup for Redfin as it continues expanding its services and reach, and are the latest in a string of positive earnings reports for the company.

During a call with investors, Redfin CEO Glenn Kelman noted that the numbers were also “better than we projected in our last earnings call.” He also said that Redfin’s revenue from its core real estate services of “brokering home sales” increased 31 percent year-over-year. That makes the final months of 2019 the fourth straight quarter in which revenue in that part of the business accelerated.

Overall, Kelman struck a positive tone in the call as he discussed everything from the housing market to Redfin’s margins which, he revealed, are on the rise.

“Gross margins improved year-over-year in all of our segments,” he said.

Here are the key numbers you need to know:

Between October and December last year, Redfin raked in $233 million.

In a statement Wednesday afternoon, Redfin also claimed that it saved consumers “over $44 million in the fourth quarter and over $180 million in 2019.” Those numbers include savings the company counts from the refunds it directly hands over to customers after a deal closes, as well as from lower listing fees.

During the first quarter of 2020 — which we are in the middle of now — Redfin expects to bring in between $179 million and $188 million in revenue, which would represent a jump of between 63 percent and 71 percent.

$217.05 million: The number analysts had expected

Prior to Wednesday’s earnings report, analysts had expected Redfin to announce $217.05 million in revenue, a jump of 74.9 percent year-over-year. Analysts also expected the company to post a quarterly loss of $0.12 per share.

The company’s actual numbers, then, effectively blew analyst expectations away.

Redfin stock was trading around $25.77 per share Wednesday afternoon in the hours leading up to the earnings report. That was up for both the day, and year-over-year.

However, after the company published its earnings, the stock spiked up to more than $27 per share in after hours trading. 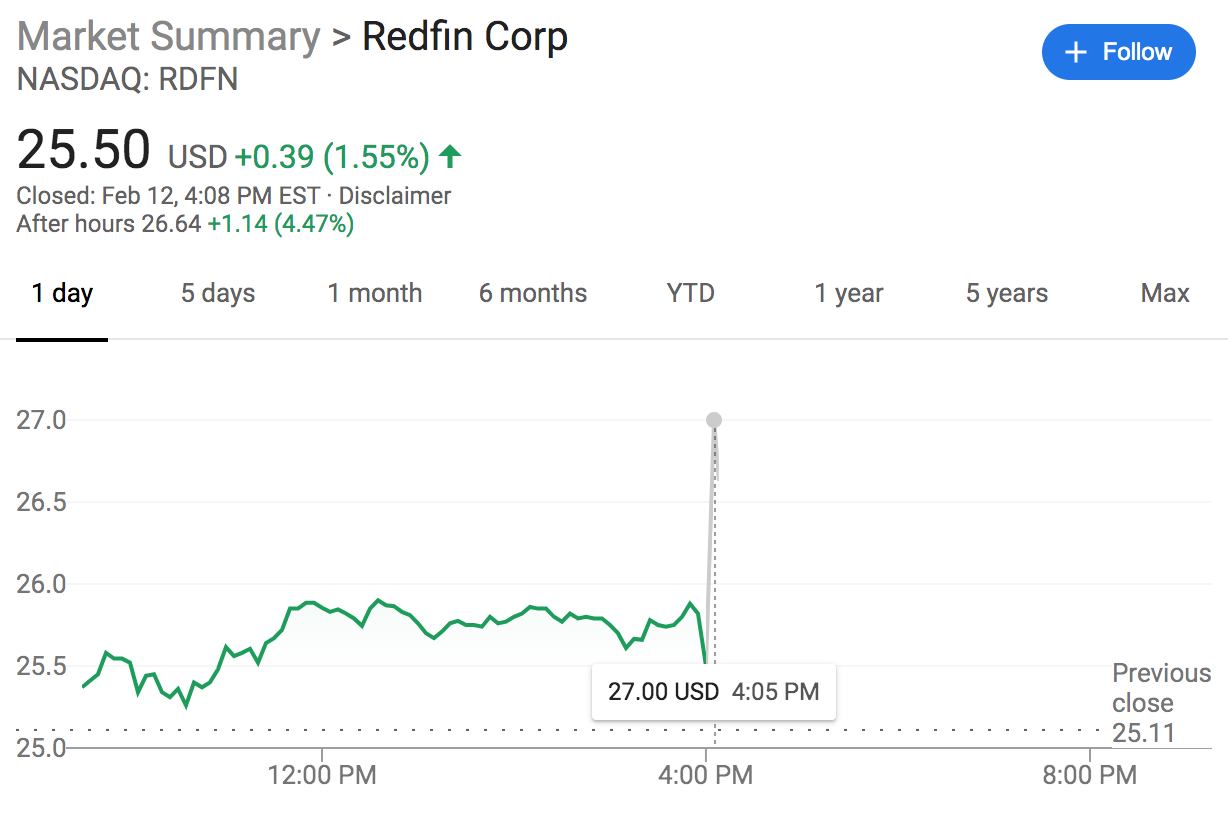 Redfin’s stock price fluctuated over the course of Kelman’s call with investors, but ultimately settled at about $27.18 per share, up about $1.50 from its closing price for the day. The jump represents a significant vote of confidence in the company from investors.

The company also revealed in its earnings report that it brought in $780 million last year, which represents a jump of 60 percent year-over-year.

In a statement, Kelman said that Redfin’s “multi-year investments in a broader solution for our customers that includes mortgage, title, renovations and instant offers are really starting to pay off, but what’s most important is that we’ve been able to grow while maintaining our commitment to efficiency, so customers get low prices and Redfin can generate more gross profit.”

Kelman added on the call with investors that 2019 was an especially good year for some of Redfin’s newer services. For instance, one year ago Redfin’s agents were “mostly wary” of recommending their own company’s lender.

However, that has since changed, Kelman said.

“2019 was the year that Redfin mortgage largely won our agents’ trust,” he concluded.

In a question and answer period during his investor call, Kelman was also asked about rivals’ efforts to build portal-like software that could potentially challenge established players like Redfin or Zillow.

However, Kelman said he believes that existing companies such as his have a significant “incumbent advantage” when it comes to products like portals. Other companies trying to do the same thing have struggled to get their efforts near the top of Google’s search results, for example, even when they’ve essentially tried copying Redfin “pixel for pixel.”

Ultimately, Kelman said that he believes Redfin’s technology is several generations ahead of the competition.

Redfin last reported earnings in November, when it announced that it brought in $239 million. That represented a jump of 70 percent year-over-year, and the earnings gave the company’s stock a shot of adrenaline at the time.

In August, Redfin also beat analysts’ expectations when it revealed it brought in $197.8 million in revenue during the second quarter of 2019. At the time, Kelman referred to the quarter as a “turning point” for the company.

“Our goal is to be the first national brokerage provider of a complete real estate solution,” he said at the time.

During Wednesday’s call, Kelman echoed those comments, saying that his companies diverse products leave it well positioned to thrive in changing markets, and that he envisions it growing into a “much larger company.