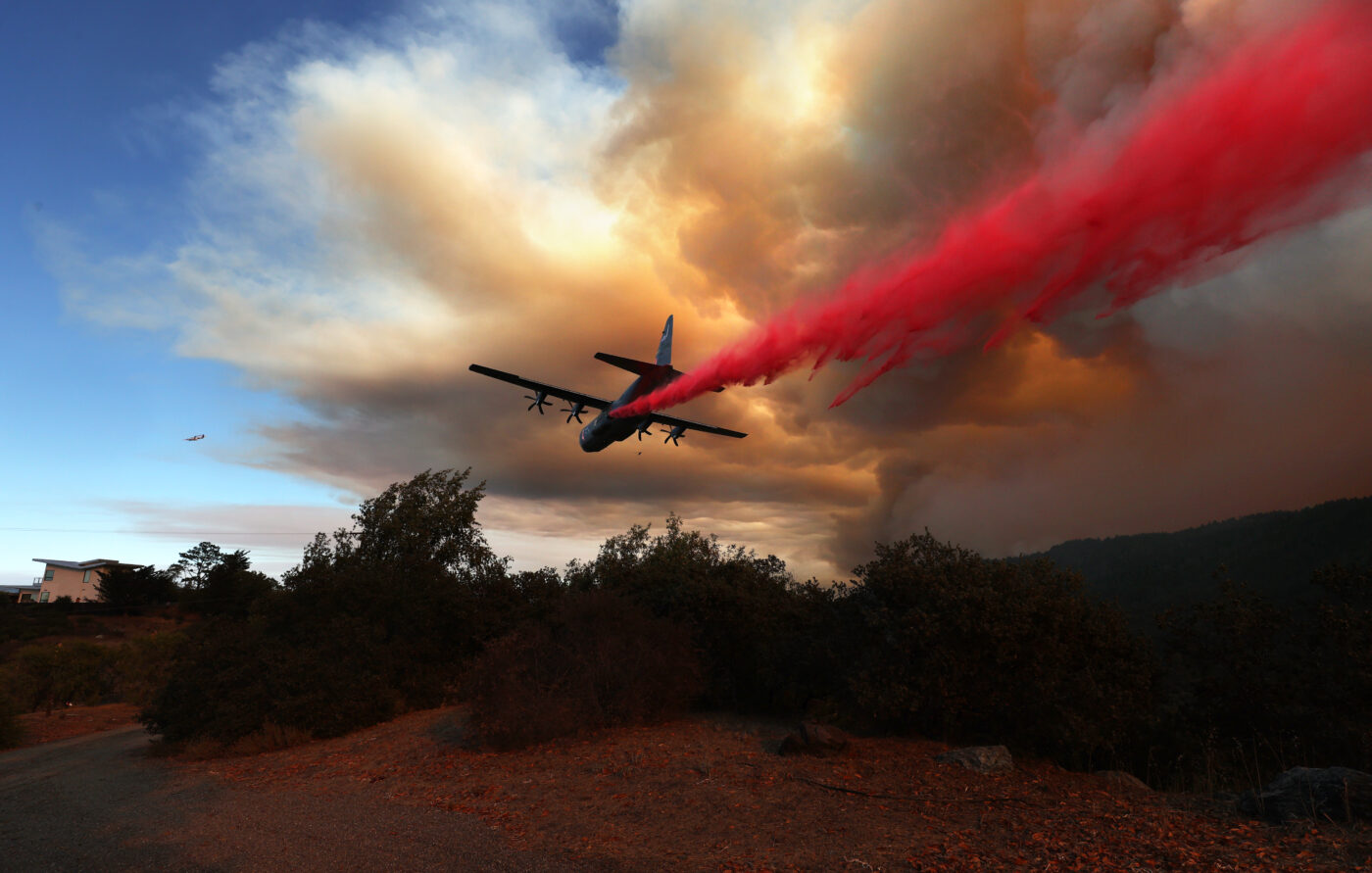 An aircraft drops retardant ahead of the LNU Lightning Complex fire on August 20, 2020 in Healdsburg, California.

Record-setting fires have burned more than 1.2 million acres in California, forcing hundreds of thousands of people from their homes.

No one thought the storm would be so bad.

“Last Sunday night when this storm came through it was completely unexpected,” Derek Timm told Inman. “We had what’s called a roll cloud. It’s like a horizontal tornado and it came through with lightening shooting all different directions. It blew everything everywhere. It was a really shocking event.”

Timm is an agent in California’s Santa Cruz County, which has been ravaged by wildfire in recent days thanks in large part to the lightning that first rolled through a week ago. He’s also the vice mayor of Scotts Valley, one of the region’s many small communities that are nestled in the local hills. In normal times, the community’s pleasant climate and relative proximity to larger population centers — it’s just half an hour from San Jose and other Silicon Valley cities — make it a popular destination.

But over the past week, it has looked very different.

“The air is so filled with smoke that the sun is blacked out during times of the day,” Timm said. “It looks like an orange glow. The sky is brown. It’s like some post-apocalyptic movie.”

Scott’s Valley isn’t alone in looking like a disaster movie right now. Across the Golden State, hundreds of fires had burned across more than a million acres by Monday morning. They forced the evacuation of hundreds of thousands of people. And they generated so much smoke that much of the western U.S. now sits beneath a blanket of grey fumes.

It has been a record-breaking fire year, and the most dangerous season is only just now beginning.

But even as homes burned and lives were lost, agents in the fire zones have stepped in to help others in their communities. It’s a role that falls outside the traditional job description for most agents, but it’s also one of the few silver linings in a situation that is otherwise quite dire.

“Although it’s heartbreaking,” Timm added of the fires, “it’s heartwarming to see how the community has faced this adversity.”

The scope of the fires is difficult to fully appreciate, but in a nutshell there are lots of them and several are huge.

Specifically, on Monday California Gov. Gavin Newsom said that there were 625 fires burning in the state, many of which were the result of more than 13,000 lightning strikes. Cal Fire, the state’s firefighting agency, described the situation as a “lightning siege” that began on Aug. 15.

Collectively, the fires had burned more than 1.2 million acres as of Monday, which Newsom noted is larger than the Grand Canyon. More than 14,000 firefighters have deployed to the front lines, according to Cal Fire.

Two of the fires have also grown to record sizes. The LNU Lightning Complex fire had burned more than 350,030 acres as of Monday, making it the second-largest in California history. The blaze — which is burning across Sonoma, Lake, Napa, Yolo and Solano counties — has also killed five people and destroyed 871 buildings.

Only the Mendocino Complex fire in 2018 was larger than the LNU Lightning Complex fire, though the older blaze was far less destructive — fewer than 300 buildings burned — and it only resulted in one death.

A view of a home that was destroyed by the LNU Lightning Complex fire on Aug. 24 in Napa, California. Credit: Justin Sullivan and Getty Images

The two record-breaking fires were only 22 percent and 10 percent contained, respectively, Monday afternoon. A number of other significant fires in the state have burned hundreds of other buildings, and left at least two more people dead.

The fires have also created unhealthy air quality both in their immediate vicinities, as well as across various other western states.

A NASA satellite image shows smoke drifting from California to other parts of the U.S. Credit: NASA

During a press briefing Monday, Newsom referred to the situation as “historic.” And the result of all this chaos is that more than 250,000 people have ended up under evacuation orders.

The impact on agents and real estate consumers

Timm was among those who evacuated. He recalled to Inman the experience of shifting through pictures and belongings, deciding what to take, and said at one point his two teenage kids asked about what was happening.

“They asked, ‘dad, could our house really burn down?'” Timm said. “I said, ‘yeah, so grab the things that are important.’ It’s a little bit surreal.”

Jeremy Larson, an eXp Realty agent in Santa Cruz County said evacuations have also impacted a number of his clients.

That creates a whole host of problems related to showings and scheduling. But Larson said one of the most series issues to arise has to do with insurance companies deciding not to issue new policies in some areas for the time being.

“We’ve got three houses that are in contract right now that fall into that situation,” he explained. “We’re encouraging buyers, lenders and sellers to hold hands and take it week by week. The last thing you want to do as a seller is lose your buyer and go back on the market.”

Insurance issues, and fires generally, have been an issue in California for a long time. But what makes this particular situation unique is that the problem this time around is much closer to the population centers of the Bay Area.

“This is definitely a newer thing,” Larson added.

Local residents sit next to a vineyard as they watch the LNU Lightning Complex fire burning in nearby hills on Aug. 20 in Healdsburg, California. Credit: Justin Sullivan and Getty Images

Surprisingly, however, the agents who spoke with Inman said that business remains brisk — despite the looming flames and skies choked with smoke. Among those agents, Janki Patel, who leads an eponymous team at eXp Realty in Alameda County, told Inman that even during the fires she has had buyers wanting to go on showings and has seen houses receiving multiple offers.

“It’s really strange,” she added. “A lot of buyers are coming out because they can buy bigger homes for less money because interest rates are so low.”

In Patel’s case, she lives about seven miles from the nearest fire and she described packing up to-go bags and preparing to evacuate in case the flames moved closer. So far she hasn’t had to abandon her home, but she said the smoke is “everywhere and you can’t even see the roadway in front of you.” Ash is raining down on cars. And vehicles are backed up in long lines for fuel at gas stations.

“The impact has been really unbelievable,” she said. “There was a time a couple of nights ago I was in panic. It was so surreal.”

And like Larson, she said this kind of thing is new to her area.

“I know it’s in L.A. and we hear about fires in Death Valley,” she said, “but never so close to home.”

In some cases, those encroaching flames have actually left agents homeless. On Monday, the California Association of Realtors (CAR) told Inman that at least 10 Realtors across three different counties have lost homes in the blazes. Additionally, “countless” other members of local Realtor organizations have been evacuated, according to CAR.

Sharon Swallow, an agent with Coldwell Banker in Monterey County, was among those who evacuated. She told Inman she got the order to evacuate Saturday, while she was working on the paperwork for a property that had just gone under contract.

“I totally freaked out because I wasn’t ready,” she said.

Swallow quickly found herself “just throwing stuff in the car,” but eventually ended up packing things like tax records, family memorabilia, as well as her most valuable possessions such as jewelry.

Despite the evacuations, however, agents don’t envision the local real estate market tanking in the near future. Larson, for example, said that inventory has been exceedingly low lately, demand has been high and now the fires have actually reduced the number of available houses. The fires are obviously a tragedy, but the collateral result may be housing that is actually more expensive.

“I don’t think it’s going to affect the market too much,” he said.

Swallow agreed, and added that buyers in California are hard to scare away.

Real estate professionals are looking for ways to help

For the time being, agents told Inman they’re looking to help their communities. For Patel, that has involved offering advice on a radio show she hosts, and turning her home into a kind of way station for displaced clients.

“I talked to a few of my past clients and they were directly impacted,” she recalled. “This was Saturday night and they were like, ‘where do we go?’ So they came over,  and I had two or three families here for a couple of hours.”

Swallow also offered her own house to a client, though her own evacuation — which ended Monday — ultimately made that option impossible. But she has been keeping in regular contact with multiple clients to ensure they’re okay.

In Larson’s case, he and his team have been using their connections to coordinate relief efforts. Among other things, they’ve connected clients with animals to clients who can house those animals, and found clients with empty homes that can accommodate client-evacuees.

“As realtors we do know a lot of people,” Larson explained. “We know people who own houses, people who might want to sell houses. It’s a good time for us to step in and help.”

A pig stands in a field as the LNU Lightning Complex fire approaches on Aug. 19 in Fairfield, California. Credit: Justin Sullivan and Getty Images

Timm has taken a similar approach, saying that he has been reaching out to clients and trying to connect them to needed resources. He also said that in his community, real estate professionals have created a Facebook group where they can coordinate their efforts.

That’s not necessarily a role he and others envisioned for themselves when they started out in real estate, but Timm added that agents are actually uniquely suited to help when disaster eventually strikes.

“I think as a Realtor, for your clients and your community, you’re a go between,” he said. “I think people going into the industry may not realize that, but you quickly figure it out because people go to you as a resource for anything related to their home.”

How to get help:

CAR has a disaster relief fund, which is designed to help impacted industry professionals. The fund was established in 2003 and in 2018 distributed more than $400,000 after fires in the state. Those impacted by the fires can find more information and apply for assistance here. Anyone wishing to donate to the fund can do so here.

The federal government and the Internal Revenue Service have announced that people living in impacted areas can defer tax payments as a result of the fires. The deferments apply to a variety of taxes and give qualifying individuals and businesses until December to make their payments. To find out more about the deferments and to see which areas qualify, visit the IRS’s disaster relief page.

Update: This post was updated after publication with information on how real estate professionals can find assistance during the fires.

Read: Inman's complete interview with CoStar CEO Andy Florance
Back to top
Inman Connect Black Friday Sale! Bundle our next two events or secure your 2021 All Access Pass.SEE THE DEALS×
Inmanpot
Up-to-the-minute news and interviews in your inbox, ticket discounts for Inman events and more
1-Step CheckoutPay with a credit card
By continuing, you agree to Inman’s Terms of Use and Privacy Policy.