The National Association of Realtors, which has 1.4 million members nationwide, is proposing changes to its professional standards to crackdown on racist and discriminatory speech and behavior.

If implemented, the changes would apply NAR’s Code of Ethics and Standards of Practice to all of a Realtor’s activities, not just those related to real estate; would prohibit hate and harassing speech against protected classes; would prohibit all discrimination, not just willful discrimination, against protected classes; would recommend that ethics violations be considered under membership qualification criteria; would reiterate that the association can refer ethics violations to governmental agencies; and would offer specific guidance for hearing panels regarding violations that would consider discrimination “particularly egregious” when determining appropriate discipline and add termination of membership for up to three years as a possible disciplinary action.

“During the social unrest throughout the nation in late spring and summer of 2020, NAR received an unprecedented number of complaints about Realtors posting discriminatory speech and conduct online, especially on social media. Local and state associations experienced a similar influx of these complaints. A local association of Realtors wrote to NAR President Vince Malta requesting that NAR consider the Code of Ethics’ applicability to this type of speech and conduct,” NAR said in an FAQ regarding the proposed changes.

That local association is the Atlanta Realtors Association, which sent a letter to Malta on June 19. The association’s president, Jennifer Pino, called on NAR to identify potential changes to the Code of Ethics and to qualifications for Realtor membership to create consequences for Realtors that employ discriminatory language and practices.

“The hate rhetoric, discriminatory language, practices, and actions by members on social media and other avenues, while at the same time promoting the Realtor brand should not be allowed to continue. With all of the effort we have made to promote professionalism in the industry, we cannot continue to allow the Realtor brand to be damaged by these hateful few. This must be stopped,” Pino wrote.

While typically a NAR committee considers policy recommendations at the trade group’s mid-year or annual conferences, for this issue, the NAR Professional Standards Committee called a special meeting on June 29 and enlisted its Interpretations and Procedures Advisory Board to review the Code of Ethics’ applicability to discriminatory speech and conduct.

After the advisory board met virtually five times in July and August and had “numerous” discussions with members in NAR’s private communications platform “The Hub,” the committee called a special meeting on Oct. 5 to vote on eight recommendations from the advisory board.

The committee approved all eight, six of which require approval from NAR’s board of directors for implementation. The board, which has some 800 members, will vote on the changes on Nov. 13 at the association’s annual Realtors Conference & Expo, which will be entirely virtual for the first time ever.

“When one Realtor posts discriminatory speech or conduct online, that content becomes reflective of Realtors on the whole. Left unchecked, those statements become who we are as an organization, and further reinforce the barriers to homeownership experienced by so many Americans. These recommendations are one very impactful way we can advance equity and fairness in the real estate industry, and ensure access to the American Dream for all,” the Professional Standards Committee said in its FAQ.

The committee met ahead of the conference in part because of the ability to meet virtually, but also because of the number of inquiries NAR received regarding this issue, NAR spokesperson Mantill Williams told Inman via email. NAR also thought it was important to provide the board of directors “ample time to consider the specific language of the Committee’s recommendations in advance of their November 13th meeting” and also provided “more time to get feedback, provide communications and other resources, answer questions, and share the recommendations which helps the directors make a well-informed decision,” he added.

Asked what opportunities there will be for NAR members to discuss the proposals at its annual conference, Williams said, “The recommendations will be presented and discussed at the Professional Standards Forum on November 2nd.”

Here are the proposed changes according to NAR’s Professional Standards Committee:

1. To amend Policy Statement 29 of the NAR Code of Ethics and Arbitration Manual to expand applicability of the Code of Ethics to all of a Realtor’s activities. Currently, the code only applies to real estate-related activities, which means “members can engage in conduct and speech that is discriminatory and abhorrent, but unless it can be tied to a real estate-related activity or transaction, the Code of Ethics, specifically Article 10, does not apply,” according to the advisory board. Article 10 currently prohibits denying equal professional services to anyone in the above-mentioned protected classes.

“This change is really required as a threshold to being able to address the issues of hate speech, discriminatory speech and racist speech reported to NAR, state and local associations,” said Bruce Aydt, advisory board member, in a video about the changes.

“Without this kind of change, we will not be able to have any provisions in the Code of Ethics which will address the racist and discriminatory conduct in speech outside of real estate transactions that has been reported to NAR and state and local associations.”

2. That the proposed changes to Policy Statement 29 be effective immediately upon final approval, rather than on January 1, 2021, to send “a clear message that the National Association of Realtors is committed to the highest ethical standards for its members.”

3. To add the following new standard of practice under Article 10:

“This proposed Standard of Practice directly flows from the requirement to not deny equal professional services or be parties to a plan to discriminate. Specifically, bias against protected classes revealed through the public posting of hate speech could result in Realtors not taking clients from certain protected classes or not treating them equally, which would lead to violations of the Fair Housing Act due to overt discrimination or disparate impact,” the advisory board said.

Aydt noted that the preamble to the Code of Ethics requires Realtors to “identify and take steps, through enforcement of this Code of Ethics and by assisting appropriate regulatory bodies, to eliminate practices which may damage the public or which might discredit or bring dishonor to the real estate profession.”

He stressed that just because someone makes an allegation against a member does not mean that member will be found in violation. Rather, “it still must be proven by the complainant with clear, strong and convincing proof,” he said. “That is the standard that we have in the Code of Ethics and Arbitration Manual for ethics hearings.”

4. That the proposed standard of practice be effective immediately upon final approval, rather than on Jan. 1, 2021, to send “a clear message that the National Association of Realtors condemns discriminatory speech and conduct.”

5. That the definition of “public trust” be expanded to include all discrimination, not just willful discrimination, against the protected classes under Article 10 of the Code of Ethics, and all fraud, not just fraud resulting in substantial economic harm. 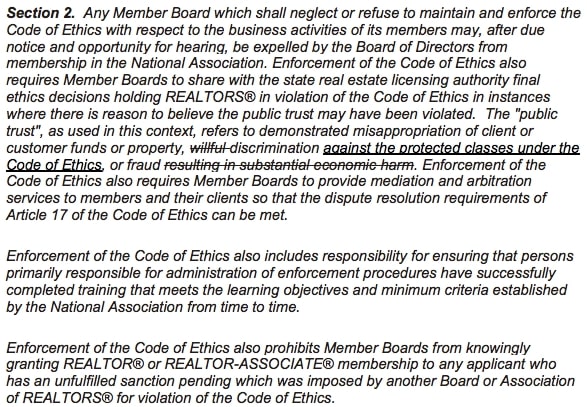 “As a result [of expanding the definition], associations would be required to share with the state real estate licensing authority final ethics decisions holding Realtors in violation of the Code of Ethics in instances where there is reason to believe the public trust, as expanded, may have been violated. This is recommended so the real estate licensing authority, and other governmental agencies as recommended by the Association, are made aware of any findings of a violation of the Code of Ethics involving discrimination,” the advisory board said.

6. To refer the consideration of membership qualification criteria in instances where an individual has been found in violation of Article 10 or Standard of Practice 3-11 to the Membership Policy and Board Jurisdiction Committee for discussion at their next meeting. Standard of Practice 3-11 prohibits Realtors from refusing to cooperate based on a broker’s membership in a protected class.

7. To amend Section 23(j) of the manual to reiterate later on in the policy what is said in the first paragraph, which is that NAR has the ability to refer final ethics decisions to governmental agencies. 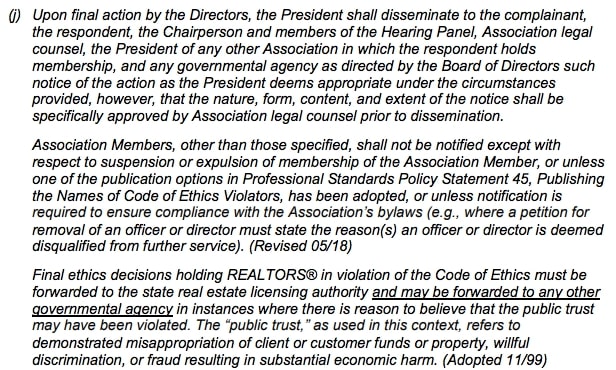 These amendments would add termination of membership for up to three years as a possible disciplinary action for first or repeat violations of Article 10 or Standard of Practice 3-11.

They would also add this guidance for hearing panels: “Cases in which there is reason to believe that violations of the public trust, including demonstrated misappropriation of client or customer funds or property, discrimination against the protected classes under the Code of Ethics, or fraud have occurred are considered particularly egregious. Associations are encouraged to critically examine these types of cases and recommend discipline consistent with the seriousness of these violations, their harm to consumers, and to the reputation of Realtors as committed to the highest level of professionalism.”

The entirely new proposed appendix defines both sexual harassment and hate speech. It defines hate speech as “speech that is intended to insult, offend, or intimidate a person because of some trait (as race, religion, sexual orientation, national origin, or disability).”

Editor’s note: This story has been updated with comments from NAR and with additional details about the proposed policies. 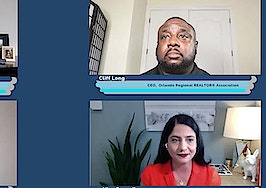 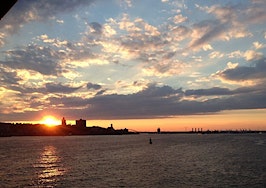 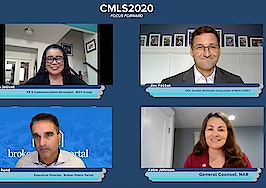 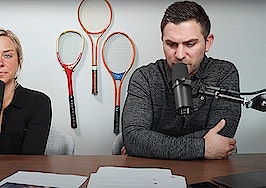