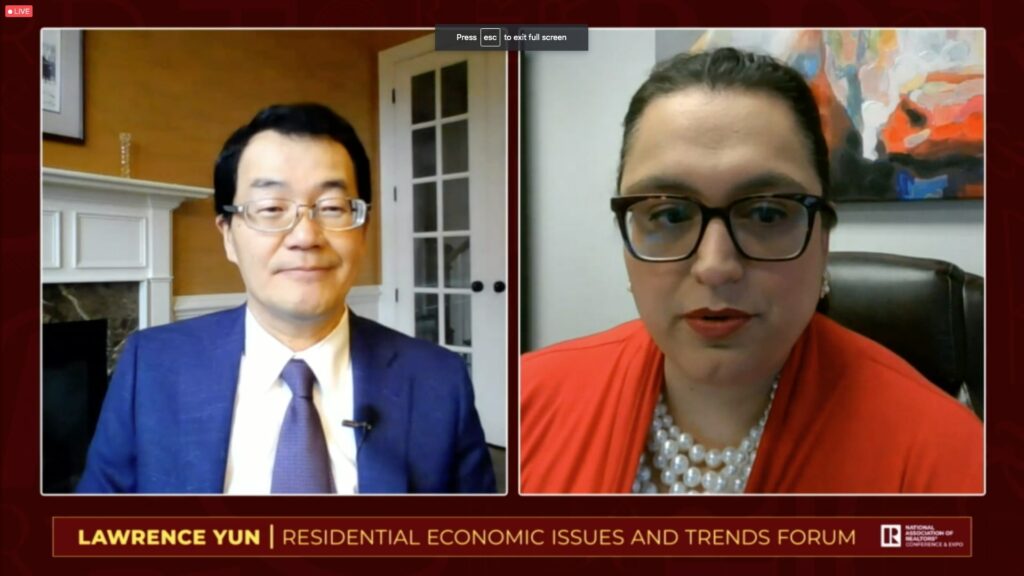 It has been a year of surprises and the “exceptional performance of the housing market” in 2020 is one that will extend into next year, according to the National Association of Realtors’ chief economist, Lawrence Yun.

“My economic forecast is that in 2020, it is a recession, but in 2021 with the vaccine discovery and availability, it will be positive. The interest rate environment will continue to be low, inflation not really a problem. Mortgage rates should remain stable near 3 percent all the way through 2021,” he said.

He added, “In 2021 I think that demand for work from home, demand for larger sized homes, will continue. So home sales [will be] rising 9 percent next year and home prices are in no danger of decline because of housing shortage.” 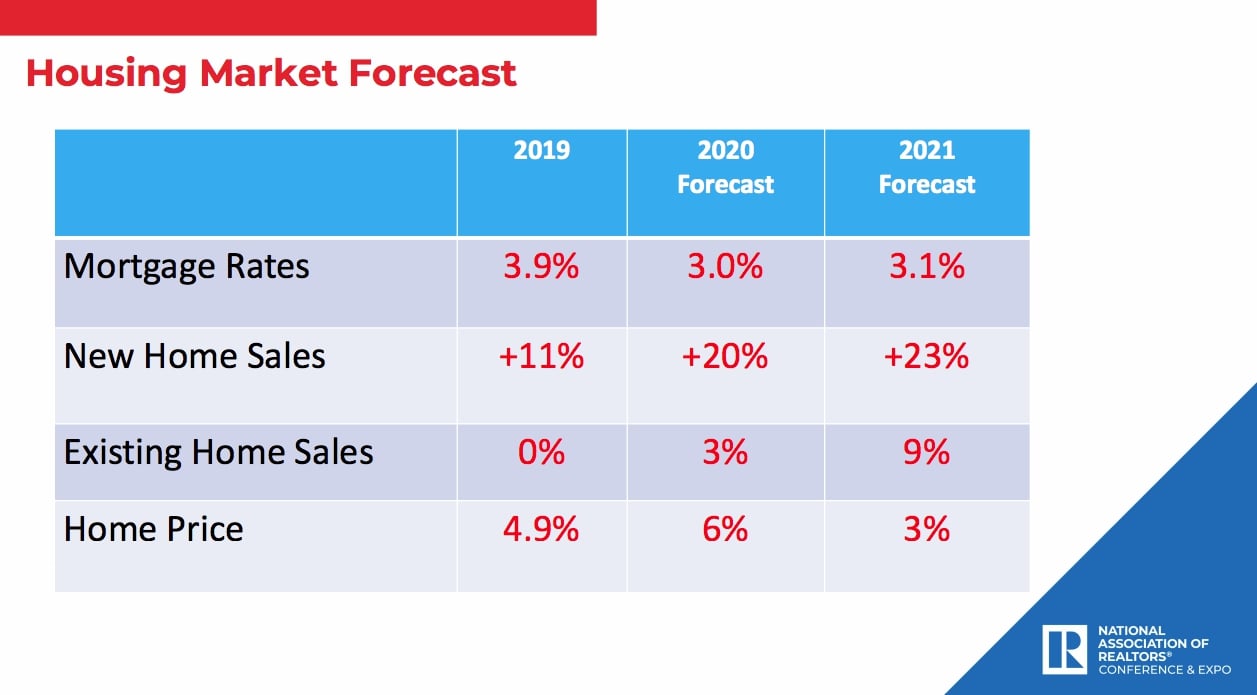 Yun began by noting that President-Elect Joe Biden has said he wants to introduce a $15,000 homebuyer tax credit, which for moderate-income families could be “quite substantial downpayment assistance.” On the other hand, Biden has said he’s considering eliminating the 1031 exchange, which Yun said could “greatly restrict” housing supply because home builders often buy land through 1031 exchanges.

“We need to move away from any policy proposal that would further restrict land sales, because we need more land to turn it into developed lots,” Yun said.

Yun laid out expectations for U.S. GDP, which he anticipated would come in at -5 percent this year and then rise 4 percent in 2021 — better than expectations for Britain, Japan, Canada and the Euro zone, but worse than China and South Korea. South Korea instituted an aggressive contact tracing program and was therefore less impacted by the pandemic, according to Yun. 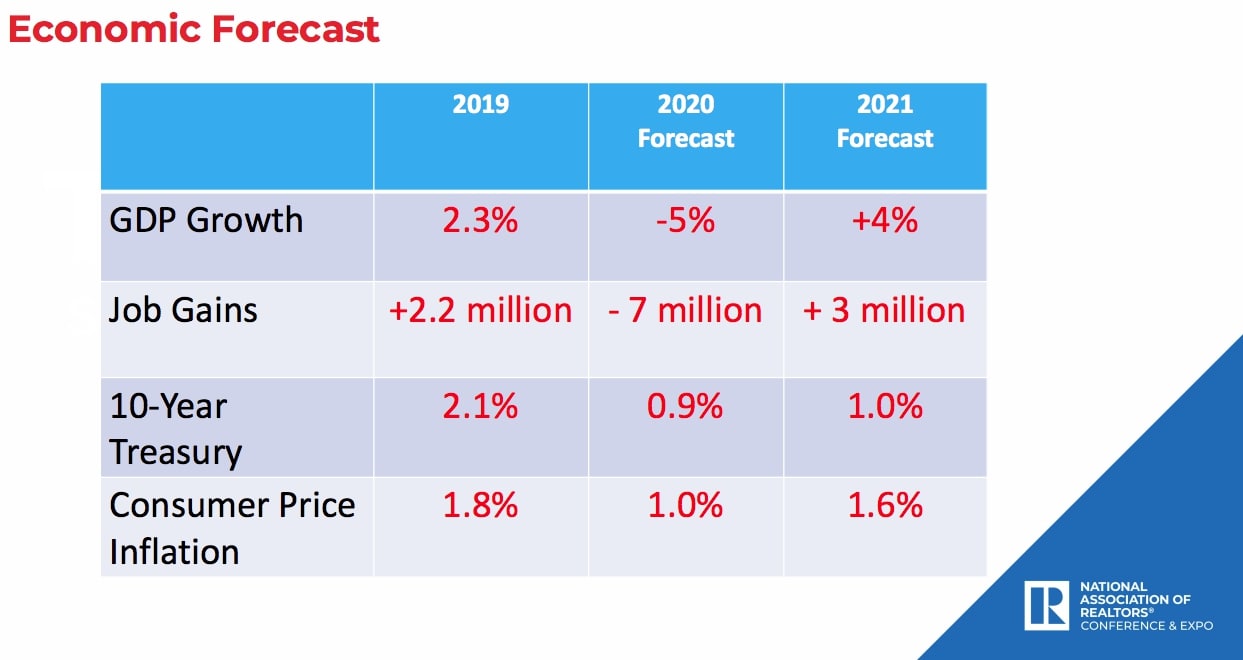 Despite the GDP decline, he noted that incomes were higher because of stimulus checks, bigger unemployment checks and Payment Protection Program (PPP) loans, and that the savings rate was higher. He predicted that once the coronavirus vaccine is widely available, that could unleash spending and stimulate the economy. 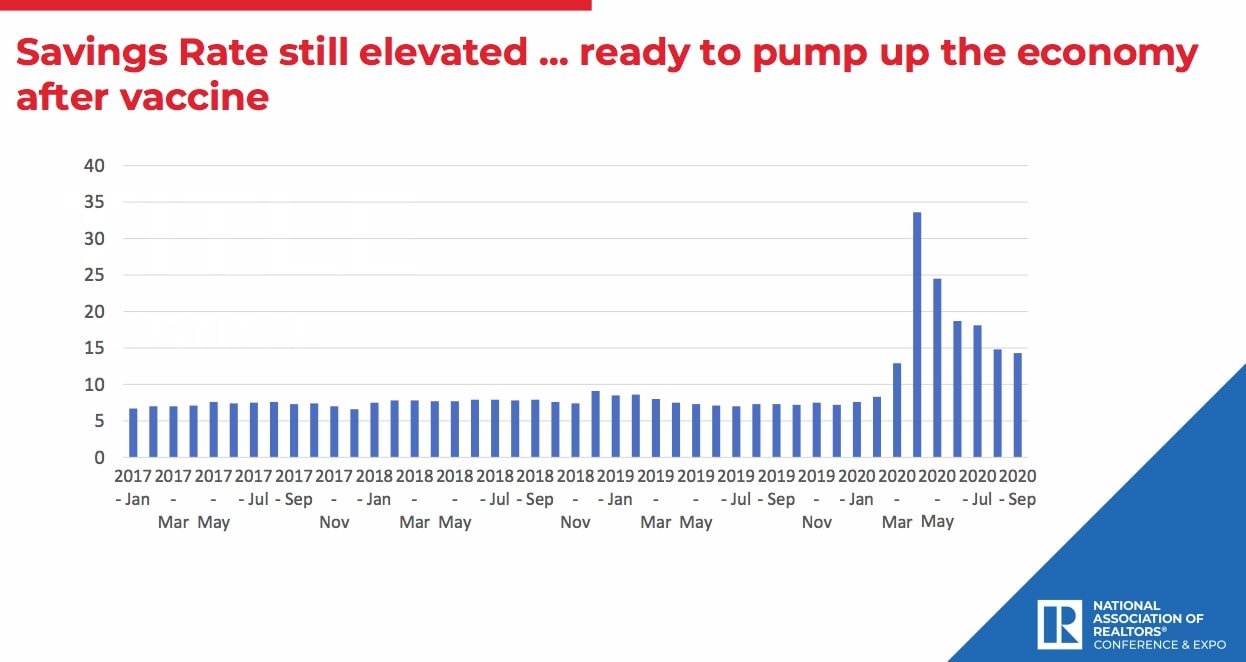 Yun noted that, while jobs have increased by 10 million since the initial 20 million plunge at the beginning of the pandemic, that means the economy needs to add 10 million more jobs to get back to its prior peak.

He anticipates that by year end, the economy will have lost 7 million jobs and will only gain 3 million jobs next year. Job gains in the last few months have been modest, which he said suggested that new lockdown measures could slow that momentum even further. 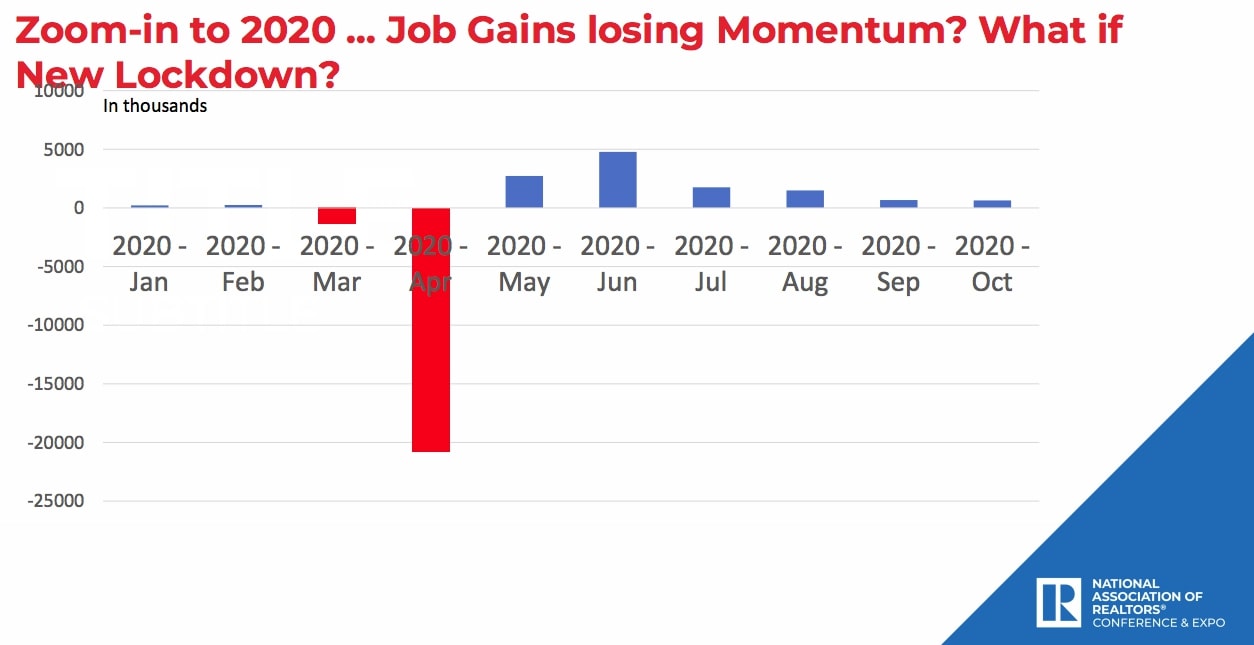 “If it is a nationwide lockdown, in my own personal opinion, it will be very harmful for the economy. Of course, we have to balance that out with the health measures, but at least related to the economy, it will be a devastating blow in terms of facing a second recession just as we are trying to come out of it,” Yun said.

“If we have more widening of the lockdown, it’s going to turn negative and it will be completely demoralizing. So I hope everyone practices the social distancing measure, putting the mask on, so that we can contain the virus and get the job market going,” he added.

Inflation has remained low, with consumer prices rising 1 percent this year and likely rising 1.6 percent next year, which means that “the Federal Reserve can continue to pursue loose monetary policy to provide the necessary funds to the banks so they can lend out to the businesses,” Yun said.

The housing market has been “remarkable” during the pandemic, according to Yun. Once lockdowns were lifted, people rushed to buy homes, he said. 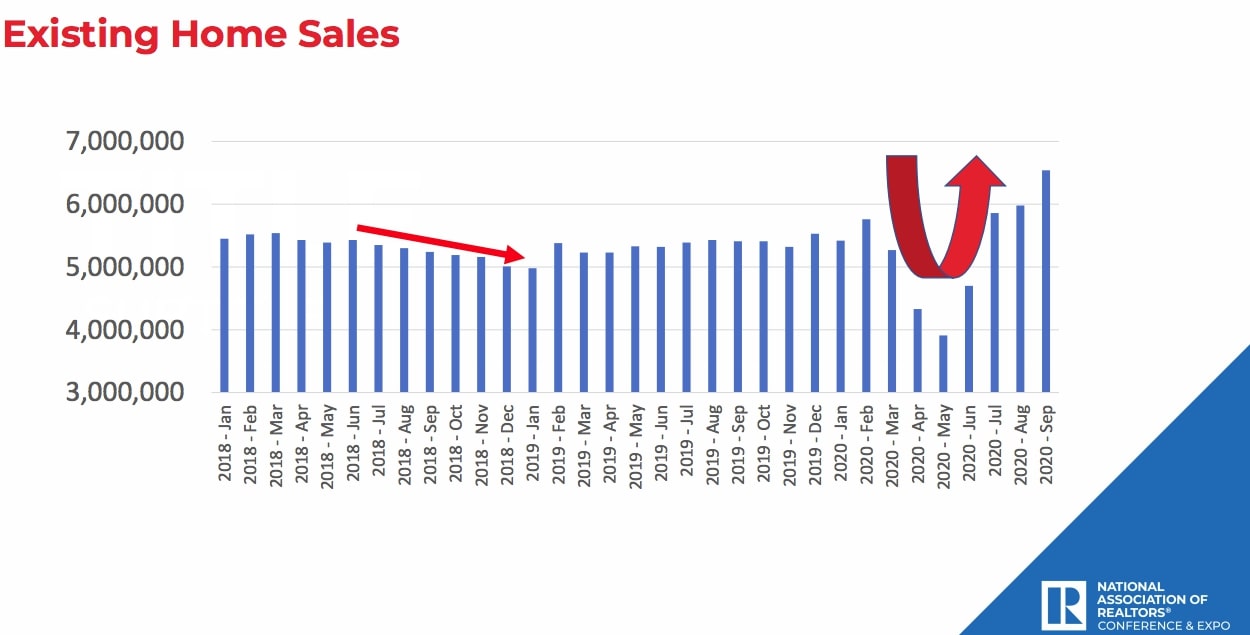 Yun attributed the strength of the housing market in 2020 in part to mortgage rates declining to an all-time low, below 3 percent. Mortgage rates will average 3 percent this year and will likely average 3.1 percent next year, according to Yun.

He pointed out that housing starts have been below-average for the past decade, which has resulted in a housing shortage. 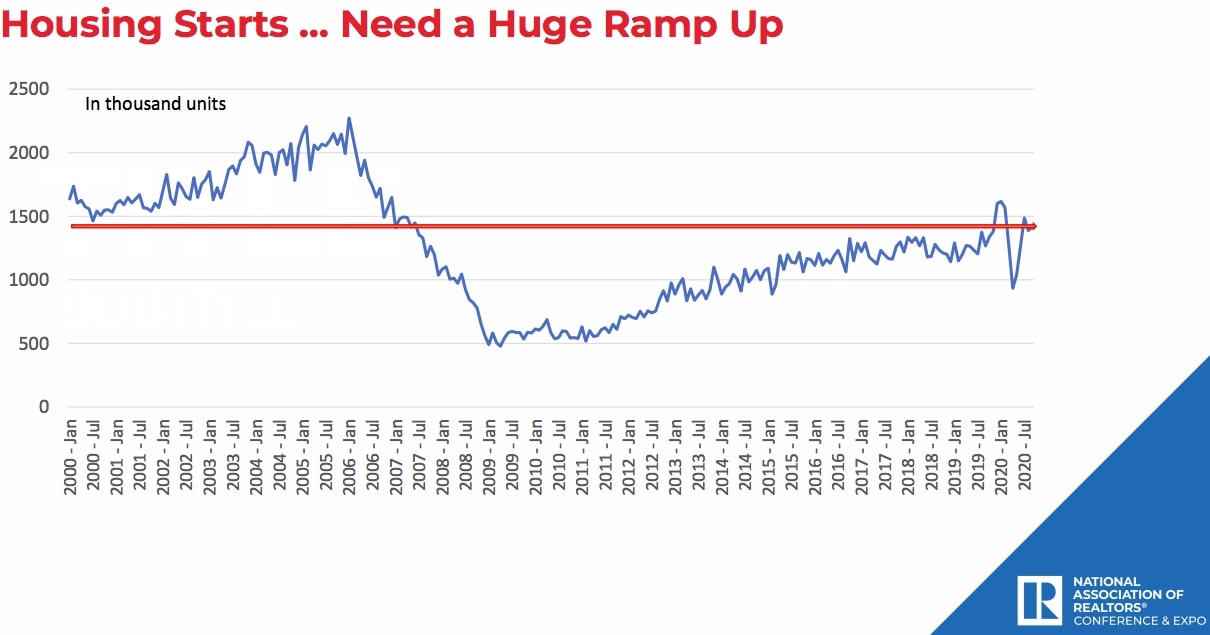 “The problem that homebuilders are facing is that lumber prices have risen greatly. So some reduction in tariffs — for example, Canadian lumber — could bring the lumber prices down, and thereby give even more incentive for the builders to be more active,” he said.

He also suggested that a training program could retrain workers from industries that have been hit hard, such as restaurants and hospitality, to be skilled construction workers who both receive higher wages and could alleviate a shortage in such workers.

Moderator Lorena Peña of the San Antonio Board of Realtors ended the forum by asking Yun how party changes in the White House typically affect the housing market historically.

Yun said that outside of Washington D.C., people are interested in and passionate about politics, but when it comes to homebuying, it’s the pocketbook that matters.

“Are the mortgage rates low, are the prices right, is the inventory available? It’s all about the economic factors [and] housing conditions,” he said. 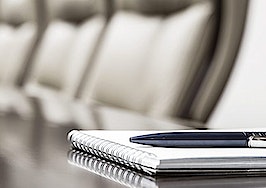 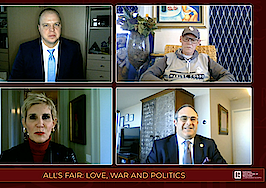 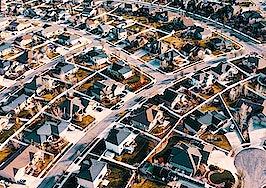 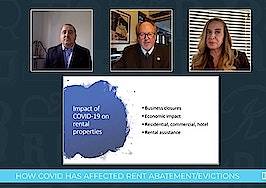