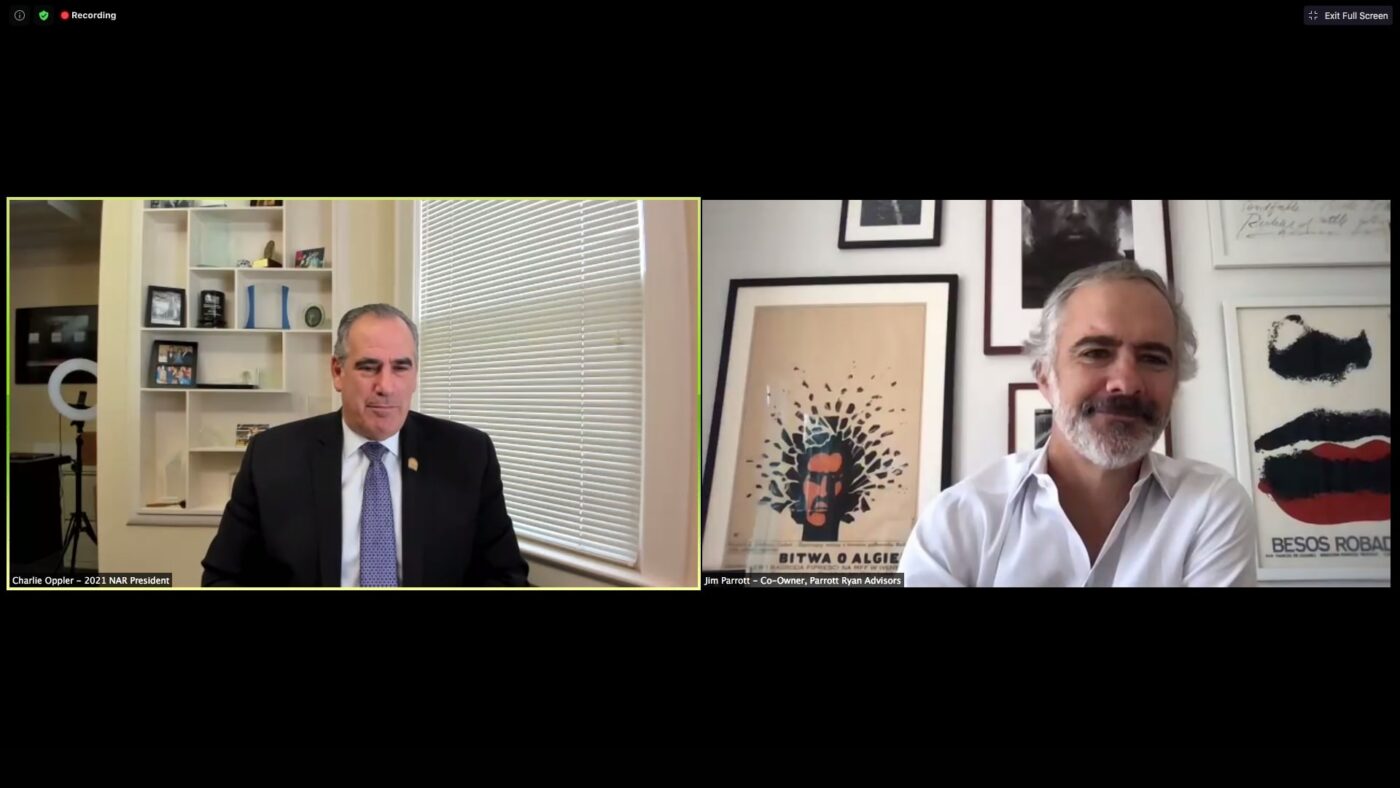 The Biden administration is likely to make housing policy a much higher priority than the current administration, according to Jim Parrott, a nonresident fellow at the Urban Institute.

Parrott was the keynote speaker at the National Association of Realtors’ Real Estate Forecast Summit on Thursday. Economist Jared Bernstein was originally slated to keynote the event, but decided against it in light of upcoming confirmation hearings after President-Elect Joe Biden nominated him to the Council of Economic Advisors, NAR President Charlie Oppler told the more than 10,000 event attendees via Zoom.

Oppler instead interviewed Parrott, who is also co-owner of Parrott Ryan Advisors, which provides strategic advice on housing finance issues to financial institutions that are active in the primary and secondary markets. Parrott also served during the Obama administration as a senior adviser to the National Economic Council where he led the team charged with counseling the cabinet and the president on housing issues. Before that, he was counsel to U.S. Department of Housing and Urban Development (HUD) Secretary Shaun Donovan.

Asked what he thought would be different between the Biden and Trump administrations on housing, Parrott said he thought Biden’s would make housing policy “a much higher priority” and gave two reasons.

“One, they view housing policy itself, the access to affordable housing both to own and to rent, as a pretty important housing policy challenge that’s worth tackling in and of itself,” Parrott said.

“But secondly, and maybe more importantly … they see housing policy as pretty intrinsically wrapped up in their broader economic policy challenges. They really want to [deal with] the racial wealth gap, particularly the gap between blacks’ and whites’ wealth, and they view the racial homeownership gap as being a core part of that problem, both in the sense that the gap in homeownership has driven the gap in wealth for many years and in the sense that it may offer an opportunity to help bridge that gap.”

The incoming Biden administration also views the lack of affordable housing near good jobs in metro areas where people want to live and work as a constraint on growth and GDP, he added.

“You’re going to see them fold [housing policy efforts] into their big economic policy pushes on stimulus early next year [and] on infrastructure probably a little later in the year,” he said.

“My guess is you’ll see housing policy elevated to a level of priority on the economic side in a way that we haven’t seen in a long time.”

If the Georgia run-offs on Jan. 5 end up giving Republicans control of the U.S. Senate, the Biden administration will have to rethink its strategy, Parrott said, but he foresees Biden’s “opening bid” will still be bipartisan legislation.

“It’s just how Biden’s wired,” Parrott said. “The guy goes back many years as someone who is more of a political compromiser than an ideologue, so I think his first instinct is going to be to reach across the aisle and see if you can’t get something done.”

But given the Obama administration’s previous experience with Senate majority leader Mitch McConnell’s lack of interest in compromise, the Biden administration will develop “a pretty robust administrative agenda as a Plan B,” Parrott said.

How comprehensive that agenda can be will depend in part on whether government-sponsored enterprises Fannie Mae and Freddie Mac remain in conservatorship, according to Parrott.

“If they remain in conservatorship in the next year I think that’ll expand the tools that the Biden administration’s got at their disposal,” he said.

“If they don’t, that is … if their current regulators spin them out as it’s being rumored they’re at least considering, it’ll limit the Biden folks fairly considerably and what options they’ve got to do something.”

The team Biden is putting together, including Bernstein, Cecilia Rouse as chair of the Council of Economic Advisors and Brian Deese as director of the National Economic Council, is a team that knows each other, the buildings they’ll have to work in, and the “Byzantine policy world” they’ll have to navigate, according to Parrott.

“They’re going to walk in the door, they’ll know exactly what they’re doing, exactly how to manage the tools at their disposal,” he said.

“So it’s a pretty well-positioned team to move quickly and aggressively, which under the circumstances is welcome.”

Under the Obama administration, Biden was good at keeping Parrott’s team focused on what mattered at the end of the day, he said.

“Biden cares a lot about housing,” Parrott said. “For him, housing is part of the American dream. When people say they want to fight their way into the middle class, it’s part of the image they’ve got of what that means to succeed.

“When people say they’re nervous about falling out of the middle class, housing is part of what they’re nervous about losing. So for him it’s not an abstraction. It’s a visceral sort of central centerpiece to how he thinks about what it is he’s doing as a leader, so I’m pretty optimistic that on this topic, he’s the right guy to have in the seat that he’s in.”

Oppler noted that nearly 3.5 million homes are currently in forbearance and asked what they could expect from the Biden administration to tackle that problem.

In the absence of an extension, forbearances will begin to expire in March, but Parrott expects that Biden’s team will want to extend the timeline to align with the recovery so that borrowers have to start paying again when the economy is healthy. Still, because most people have some equity in their homes, he expects they will sell those homes before they go into foreclosure.

“It won’t be quite as distressing to the economy as it was last time around,” he said.

Oppler asked Parrott about Biden’s proposal to abolish 1031 “like-kind” exchanges for investors with annual incomes above $400,000, which NAR opposes. The additional federal funds would allow Biden’s administration to accrue $775 billion in government spending over the next 10 years to help provide care for children and the elderly. The exchanges enable real estate investors to defer capital-gains taxes when they sell properties by directing the proceeds into new investments, a practice many investors take advantage of on a continual basis.

“The 1031 like-kind exchange [is] critical to building our local communities and roughly 84 percent of properties are owned by mom-and-pop owners in these local communities, and they are struggling collecting rent, no.1, but no. 2, if they lose the ability to trade a property as a 1031, that’s going to hurt the commercial market on top of maybe a challenged residential market,” Oppler said.

Parrott said Biden’s team would be “sensitive” to the “serious amount of distress” expected in commercial real estate from businesses that won’t be able to hang on until the economy recovers.

“[They] are going to be disinclined to remove incentives that are in place to help convert properties more readily so you don’t have a bunch of supply overhang and empty lots in downtown America,” Parrott said.

“The case that folks are going to want to make to them is that on the downtown America part of their platform they’ve got to be very careful easing up on the kind of incentives that you’re going to need to get the private markets in to clean up a lot of the residue of distress you’re going to see come May and June. I’m optimistic that they don’t throw things like that overboard too quickly, given how important they are as part of the toolkit.”

Pending home sales fall further than expected in June
Back to top
Network with CoStar, Redfin, Realogy, SERHANT., Divvy, and thousands more in-person at ICLV this October. Prices go up Sunday.Register Now×
Inmanpot
Log in
If you created your account with Google or Facebook
Don't have an account?
Create an Account
Forgot your password?
No Problem