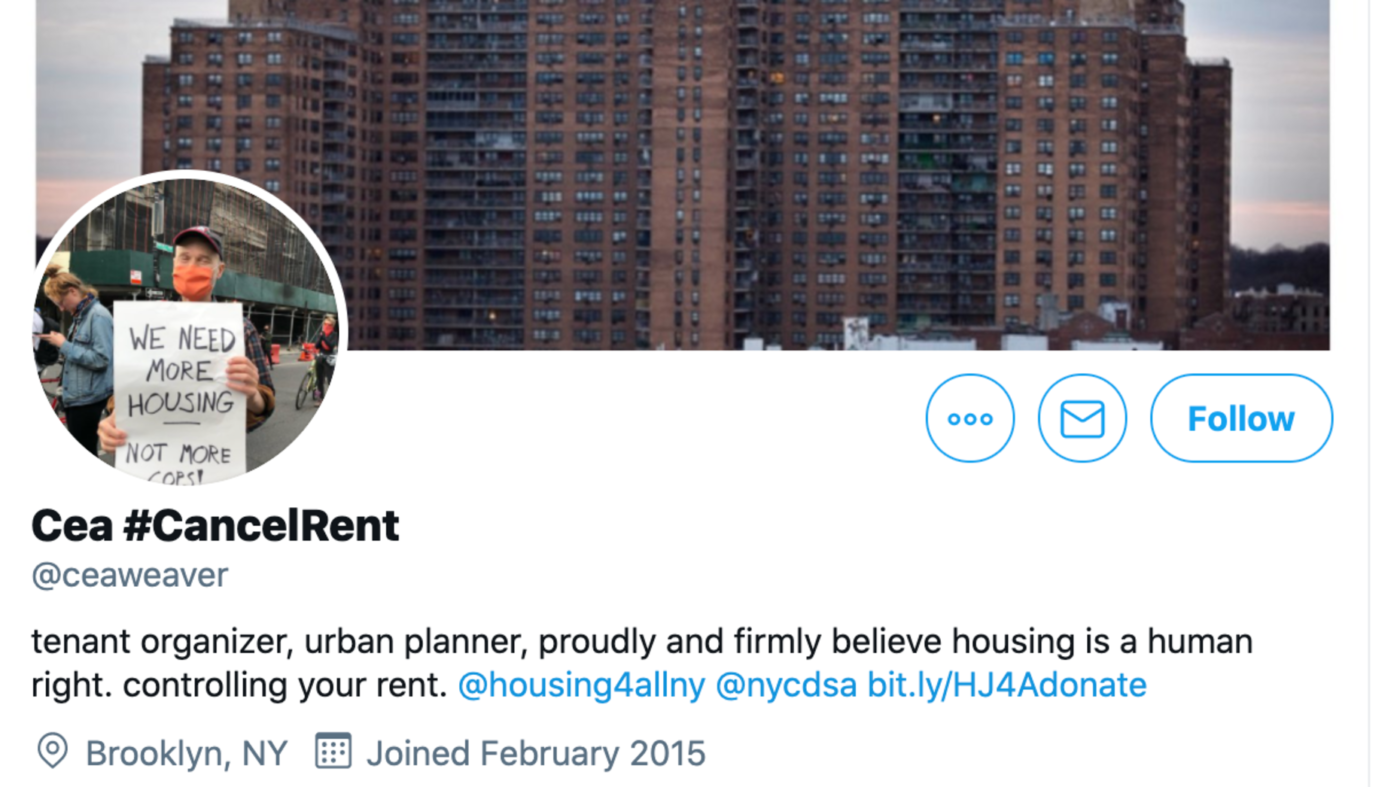 Progressive activist and tenant advocate Cea Weaver could soon be nominated to New York City’s City Planning Commission, a move by the city’s public advocate that was slammed by the state’s leading real estate trade organization.

Known as “Cea ‘Cancel Rent'” on Twitter, Weaver, 32, is a campaign coordinator for the tenant coalition Housing Justice for All and one of the activists who helped spearhead the city’s landmark rent law. Public advocate Jumaane Williams is weighing the option of nominating Weaver to the City Planning Commission, according to the New York Post.

The City Planning Commission was established in 1936 and is comprised of 13 members who decide issues having to do with city planning and growth, including which resources to allocate to housing and transportation. Williams has the right to nominate one member to the commission and, if nominated, Weaver would replace Michelle de la Uz, who was appointed by then-advocate Bill de Blasio in 2012.

Weaver, who is a member of the NYC local of the Democratic Socialists of America and frequently argues that housing is a right for all Americans, is currently considering the role and undergoing a city background check.

“Cea Weaver is one of New York’s leading housing and progressive policy activists who has fought for equity on behalf of individuals and communities alike, and our office is proud to have worked with her in these fights,” Williams’ spokesman, William Gerlich, told the Post. “The City Planning Commission is an instrument of real power with the ability to shape the future of our city in a progressive direction, to create change in this moment of crisis, and for years to come.”

As an advocate for tenant rights, Weaver has been one of the people to push forward an eviction moratorium during the COVID-19 pandemic. She has also organized several strikes against major rent increases and tried to push forth the Rent and Mortgage Cancellation Act of 2020, a bill that would halt evictions and foreclosures until the end of the pandemic while giving tenants more time to catch up on payments.

Alongside so many renters, @NYWFP played a pivotal role bringing tenant power to Albany. I'm not surprised our enemies are targeting them for it!

So on MONDAY, join me, @tenantspactny, @phara4assembly and more to GOTV for WFP.

While it would also support “mom and pop” landlords who lost income during the pandemic, the bill ultimately fell through. It is expected to be re-introduced by Senator Julia Salazar (D-Brooklyn) , who first introduced the bill last year, later this month. Advocating on behalf of landlords, the Real Estate Board of New York, the state’s real estate trade group, called Weaver’s potential nomination “unfortunate.”

“With New York confronting an economic crisis of historic proportion, it would be unfortunate if the City Planning Commission became another vehicle to block the creation of good jobs and much-needed housing and investment,” James Whelan, president of the Real Estate Board of New York, told The Post in a statement.

Summer is the season for rental scams, Better Business Bureau says
Back to top
Network with CoStar, Redfin, Realogy, SERHANT., Divvy, and thousands more in-person at ICLV this October. Prices go up Sunday.Register Now×
Inmanpot
Log in
If you created your account with Google or Facebook
Don't have an account?
Create an Account
Forgot your password?
No Problem