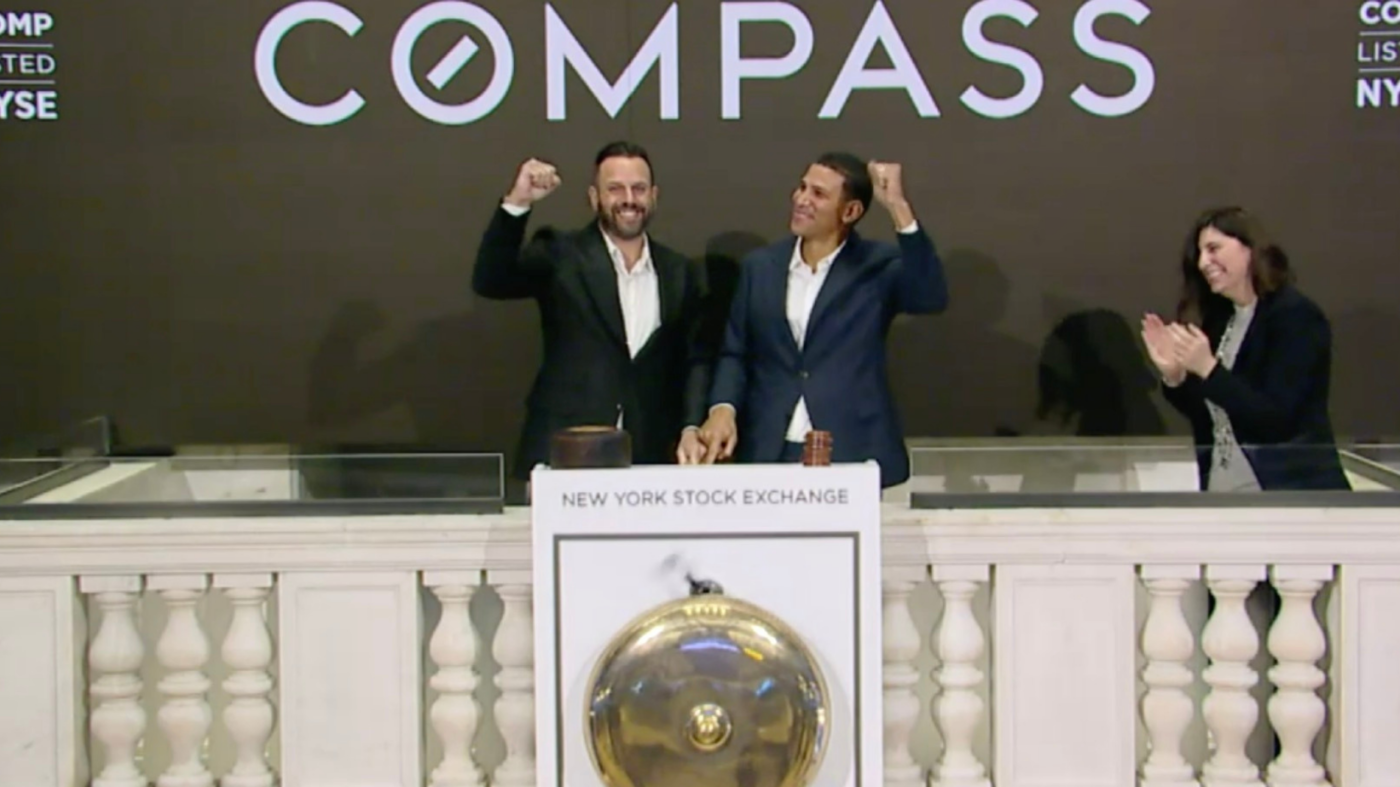 Compass, which began trading publicly on the New York Stock Exchange on Thursday, opened with a valuation north of $8 billion for the tech-enabled brokerage.

The stock, trading under the ticker symbol COMP, opened at $21.25, a $3.25 premium over its offering price of $18 per share, which was itself at the low end of its reduced target range. The opening share price gives Compass a valuation around $8 billion. However, the fully diluted valuation, which includes restricted stock units and options, is $10.3 billion.

The stock traded slightly down from its opening price in early trading. (See Inman’s Guide to Compass’ IPO for what to watch for as the day unfolds.)

Appearing on CNBC’s Squawk Box before market opening on Thursday morning, CEO Reffkin struck a bullish note, saying, “Every investor who ever invested in Compass through all our [fundraising] rounds, with this IPO, they are realizing success. I’m confident that these [institutional and retail] investors will achieve the same success in their investment over time as well.”

“We are building a proprietary one stop shop solution to meet all the agent needs,” says $COMP CEO @RobReffkin. “The agent now in a traditional brokerage firm is forced to use 9 different software providers on average…they deserve what everyone deserves. A one stop shop.” pic.twitter.com/Tb1tOtjG6H

On Wednesday, the brokerage filed a S-1 amendment with the U.S. Securities and Exchange Commission (SEC) that revealed an initial public offering (IPO) goal that’s half of what the company previously announced. The company cut its initial Class A common stock offering from 36 million to 25 million shares and dropped the price per share to $18, roughly half of the $828 million to $936 million goal outlined in a March 23 S-1 amendment.

Reffkin and his mother, Ruth, after the bell ringing. (Courtesy of Compass)

The reduced demand for the stock signaled less interest from institutional investors than expected, but some analysts are saying there’s another important factor at play as the company goes public: individual investors’ suddenly more bearish approach to tech IPOs.

In an email to Inman, Evergreen Managing Principal Brad Johnson said the Archegos Capital Management scandal may have impacted Compass’ IPO dreams as well. (The scandal centers on investor Bill Hwang, who despite a long history of shady business dealings and insider trading, convinced Japan’s Nomura Bank, Switzerland’s Credit Suisse, and Goldman Sachs and Morgan Stanley — both of which are underwriters of Compass’ IPO deal — to extend him lines of credit. The companies Hwang invested in, including ViacomCBS and Discovery, have experienced dramatic stock value decreases in the past week as Archegos collapsed.)

“They got a bit unlucky with the Archegos drama this week but, slashing their target raise just before going public is not a great look [for Compass],” Johnson said. “[However], this doesn’t necessarily mean the IPO won’t be successful.”

TechCrunch said tech stocks have experienced these wanes in interest before only to come back much stronger in following quarters, meaning Compass’ stock could find great success on the public market.

It is an honor to welcome @Compass — a real estate technology company with a mission to help everyone find their place in the world — today to its new home on the NYSE 🔔 #CompassIPO pic.twitter.com/Npo7ix0lpS

Pulse: Readers share how they're staying organized this year