Compass and Howard Hanna are the fourth and fifth largest brokerages nationwide by transaction sides, respectively, according to Real Trends. Compass went public on April 1.

“This case involves a real estate company on the brink of going public and its no-holds-barred approach to soliciting new agents in order to justify its narrative as a technology firm poised to upend the real estate industry,” attorneys for Howard Hanna wrote in the complaint.

“[T]he business model of the Compass Defendants revolves around stealing employees and trade secrets from competitors and then claiming that such disruption was the result of technology, rather than simple unlawful conduct,” they added.

The allegations are similar to those made by Zillow against Compass in an April 2019 lawsuit that ultimately settled and in a July 2019 suit filed by Realogy against Compass that is ongoing.

According to Howard Hanna’s complaint, Compass has “knowingly run roughshod” over agreements Howard Hanna has with its former agents “in an attempt to expand at any cost to support the narrative associated with its business model and initial public offering. Interfering with existing contractual relationships is inherent to the Compass Defendants’ alleged value proposition.”

“The truth, however, at least when it comes to the circumstances of the present case, is far from the public narrative: the Compass Defendants do not compete more effectively through technology but rather through a corporate policy of convincing real estate agents to break their existing contracts and disclose clients, trade secrets, and confidential information to Compass,” the complaint said.

In an emailed statement, a Compass spokesperson told Inman, “While we’re disappointed by Howard Hanna’s recently amended complaint we remain unshaken in our belief that real estate agents should have the right to choose their brokerage affiliation.”

Hornung left Howard Hanna, where he had worked for about three years, on Feb. 27. The complaint alleges that in the days before leaving to go to Compass, Hornung emailed himself the profit and loss report for Howard Hanna’s Adams Township/Seven Fields and Butler locations and the email addresses of at least 80 Howard Hanna agents and ran weekly office sales reports, production reports, budget reports and insurance reports.

“The information above constitutes trade secrets, because it includes patterns and compilations that reveal Howard Hanna’s methods, techniques, and processes for conducting business and that derives independent economic value from not being generally known to, and not being readily ascertainable by proper means by, other persons who can obtain economic value from their disclosure or use,” the complaint said.

The complaint alleges civil conspiracy, unfair competition and tortious interference with actual and prospective business advantages and economic relations against all defendants; unjust enrichment and tortious interference with contractual relations against Compass for allegedly inducing the agents to breach their contracts with Howard Hanna; actual or threatened misappropriation of trade secrets against Hornung and Compass; breach of contract and breach of duty of loyalty against Hornung, Crouse and George and violation of the Computer Fraud and Abuse Act against Hornung.

“Defendants’ wrongful activities are causing Howard Hanna to suffer irreparable harm because its agent and client relationships, contacts, and industry knowledge and expertise, are essential to its success,” the complaint said.

The complaint also alleged Crouse attempted to transfer at least one listing from Howard Hanna to Compass in violation of her contract with Howard Hanna and that George refused to submit offers to Howard Hanna listings so that she could submit those offers when she was employed by Compass. George also allegedly solicited current Howard Hanna real estate agents to leave Howard Hanna to join Compass.

Howard Hanna originally filed suit against Hornung and Compass on March 4, amending its complaint on March 23 to add allegations against Crouse and George. On March 25, in response to a motion for preliminary injunction filed by Howard Hanna against Compass and Hornung, the court entered a consent order in which all parties agreed that Hornung would not violate the terms of his agreement with Howard Hanna that prohibited him from recruiting anyone from Howard Hanna for 18 months after leaving the brokerage and from working for a competitor within a five-mile radius of any Howard Hanna office in which Hornung worked for 12 months after leaving.

In the consent order both Compass and Hornung denied any wrongdoing.

“Hornung denies any wrongdoing and denies that he has violated the terms of his Manager Contract with Howard Hanna.”

In the order, Hornung and Compass agreed they “will not directly or indirectly possess, misappropriate, sell, transfer, disclose or otherwise use Howard Hanna’s valuable trade secrets or Confidential Information” and Hornung would identify to the court any of Howard Hanna’s confidential information he downloaded or removed from Howard Hanna from Jan. 1, 2021 to Feb. 27, 2021.

Hornung also agreed to certify in writing that he has not disclosed any confidential information taken from Howard Hanna to any third party and that he would submit for forensic examination two personal laptops, one cell phone, any other computer or tablet he used to conduct Howard Hanna business and his Hotmail, Gmail, Yahoo and Howard Hanna email accounts used from Jan. 1, 2021 through Feb. 27, 2021.

Compass agreed to certify in writing “that they, including their agents, officers, directors, managers, or employees, have never had and will not obtain in the future any documents, files and/or folders or the like that Defendant Hornung removed or copied from Howard Hanna’s computers or offices,” the order said.

The motion similarly asks the court to demand that Crouse and George identify any “valuable confidential and sensitive business information” taken from Howard Hanna and any third parties they provided that information to. The motion also asks the court to require the agents to submit their computing devices, email accounts and storage drives for forensic examination.

Crouse and George declined to comment for this story. Hornung did not respond to requests for comment sent via email and LinkedIn. 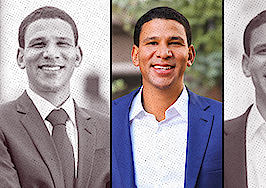