Digital title, escrow and closing provider Doma raised less than anticipated in a SPAC merger this week, after paying out nearly $295 million to early investors who redeemed their shares before their value plunged by 30 percent after the merger was consummated.

In March, when backers detailed plans to take Doma public, they said they expected the deal to raise up to $645 million in cash. That was based on $300 million provided by private investors, plus another $345 million raised in a December initial public offering of Capitol Investment Corp. V, a special purpose acquisition company (SPAC), at $10 a share.

But investors in Capitol Investment Corp. V exercised rights to redeem 29,484,128 public shares in the company in connection with the merger, the company disclosed Wednesday. The redemptions represented 85 percent of the 34.5 million public shares issued in Capitol Investment Corp. V’s Dec. 4 IPO. At approximately $10 per share, the payouts from the redemption cut the merger proceeds by about $295 million.

That left about $350 million in cash available to Doma — far below a $450 million contractual minimum threshold that would have obligated the company to go through with the merger. Although the size of the redemptions gave Doma a potential avenue to back out of the deal, the company waived the failure to satisfy the “minimum cash condition,” and the merger was closed.

The company began trading as Doma on the New York Stock Exchange on Thursday, opening at $8.20 and dropping to $7 a share by mid-day — a 30 percent discount from the shares redeemed at $10 by early investors in Capitol Investment Corp. V.

A spokesperson for Doma said in an email that “redemptions are not unique to this transaction and have no bearing on the performance of the company. Lately, there have been some larger market trends impacting the SPAC market, but the company is just as bullish today as it’s ever been that Doma will be a long-term, high-performing public company.”

David Pogemiller, president and CEO of Boardroom Alpha, said the size of the redemption, and the drop in Doma’s share price after the merger, is the latest evidence that “the SPAC market might be overdone.”

“There’s a lack of faith in the deals being put forward, and it’s going to make it significantly more challenging for future SPACs, if this trend of redemptions and (post merger share price) declines continues,” Pogemiller told Inman.

Pogemiller said the upshot could be that, in future SPAC mergers, the cuts taken by company founders and deal sponsors could be contingent on redemptions and share price performance.

Last year, Doma got on the fast track to growth by acquiring North American Title Insurance Company from homebuilder Lennar Corp., a Doma investor. During the first three months of the year, Doma reported $128 million in total revenue, up 80 percent year over year.

Doma’s first quarter results exceeded “self-funded growth projections, and Doma has never been more excited to be a public company and for the immense growth opportunity that this transaction enables,” a Doma spokesperson told Inman. The $350 million Doma has added to its balance sheet through the SPAC merger “will be an accelerant to the growth Doma is achieving against its pre-money roadmap,” the spokesperson said.

Doma said it will use proceeds from the deal “to fuel growth, both through market expansion and the development of new products aimed to extend the strategic advantage customers get from Doma’s machine intelligence platform.”

“For us, this transaction is about accelerating our ability to penetrate and revolutionize first the antiquated $23 billion title, escrow and closing market, and eventually the broader $318 billion home ownership services market,” CEO Max Simkoff said in a statement. “Our vision is to ultimately make many of the most important home buying experiences instant and digital.” 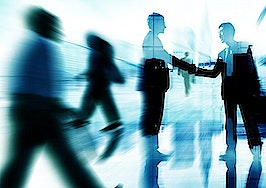