Although rates will rise, they will remain very competitive when compared to historic averages, and it would take a significantly greater increase in rates to negatively impact prices. Windermere Chief Economist Matthew Gardner explains why.

A few weeks ago, one of my viewers on YouTube sent me a note asking when I was expecting mortgage rates to start to rise and if I believed that they were going to go up, how fast will they rise, and what impacts will higher rates have on home prices.

Well, I would like to thank this particular viewer for the question — it’s going to be the topic of today’s discussion.

But before we start looking at the future of mortgage rates, I was speaking to some of our interns here at the office a while ago, and one of them asked me to explain how mortgage rates are set. Because this is somewhat pertinent to today’s topic, I thought that I’d take just a minute or two to explain to you how this all works.

Of course, there are a lot of factors that impact the rate that homebuyers themselves will get. This includes credit quality, loan-to-value ratios and the like, but the base rate is set not by looking at a homebuyer, but at the economy itself and specifically, the bond market. And even more specifically, the interest rate of 10-year Treasurys.

Now, if you’re asking yourself why 30-year mortgages are based off 10-year bonds and not 30-year? Well, that would be a good question, and this is the answer. You see we move, on average, every 10 years, and that’s why!

Here is a chart showing the average yield — or interest rate — on 10-year Treasury bills by month going back to 2010. And here is the average 30-year mortgage rate. I hope that you can see the tight relationship they have to each other. 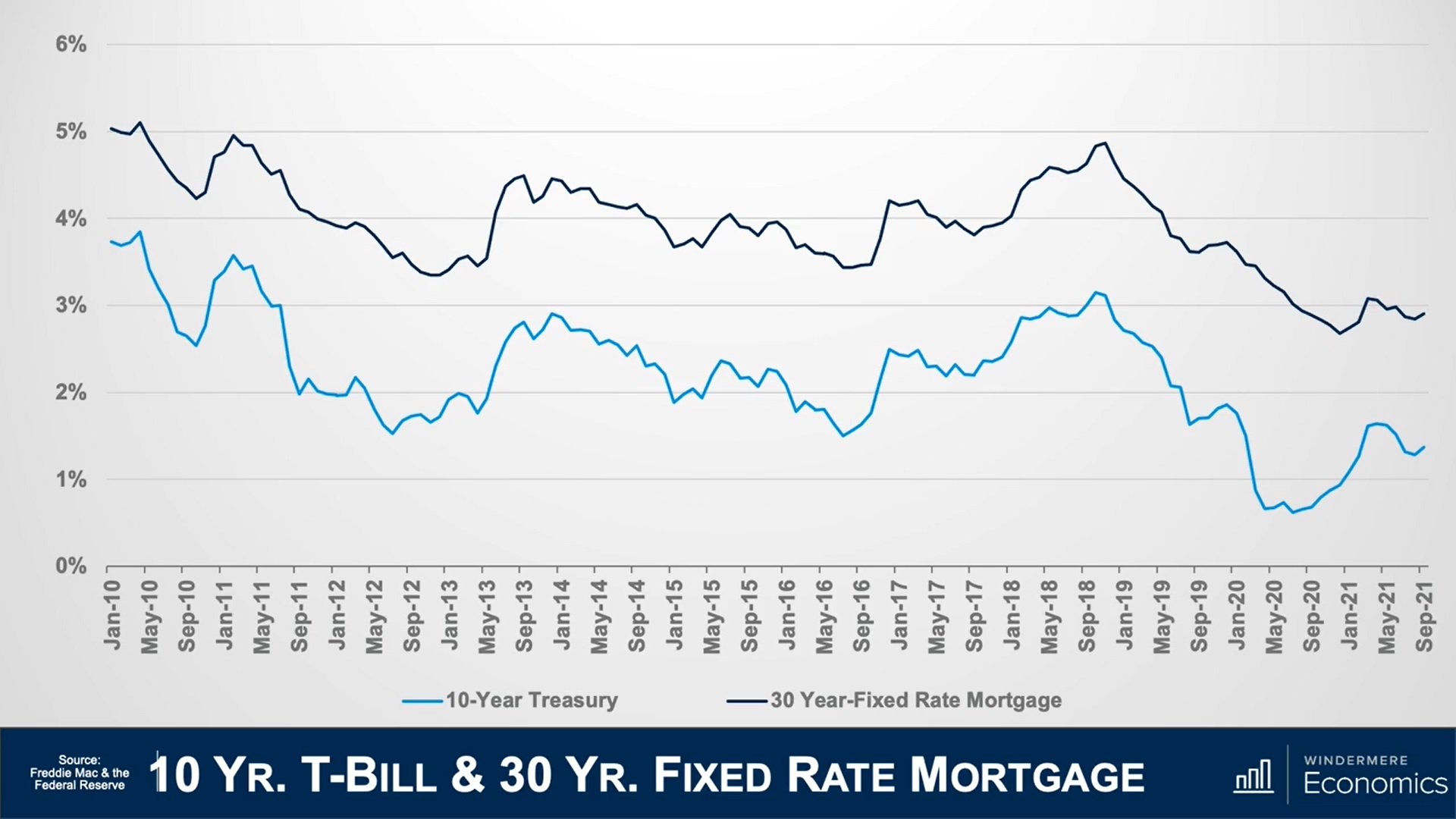 Of course, there are times when bond yields can go down and mortgage rates rise, and vice versa but in general, they track each other pretty closely.

And if you’re wondering why the rates aren’t simply the same, well, it’s because a Treasury bond has no risk — as it’s backed by the U.S. government. There is, however, some risk associated with a mortgage, so buyers of mortgage bonds expect a premium to be added because of this risk. This has averaged just over 1.5 percent since the 30-year mortgage came into being back in the early ’70s.

Now, there are some people out there who think that the interest rate on 10-year Treasurys doesn’t set mortgage rates, but rather, it’s better to track the interest paid on mortgage bonds.

Although I do see why they might think this, the base mortgage rate is actually set by Treasury yields, and the interest on mortgage bonds is set using that base and adjusting it to manage the prevailing risk tolerance that investors are prepared to accept, so I believe that watching movements in the interest paid on 10-year Treasurys is the right way to go.

And that, in essence, is how the 30-year mortgage rate is set.

If you are a regular viewer of these videos, you will now that I like to start off with some context to the subject I’m addressing, and this chart will show the average rate for conforming 30-year fixed rate mortgages going back to their genesis in the early 1970’s. 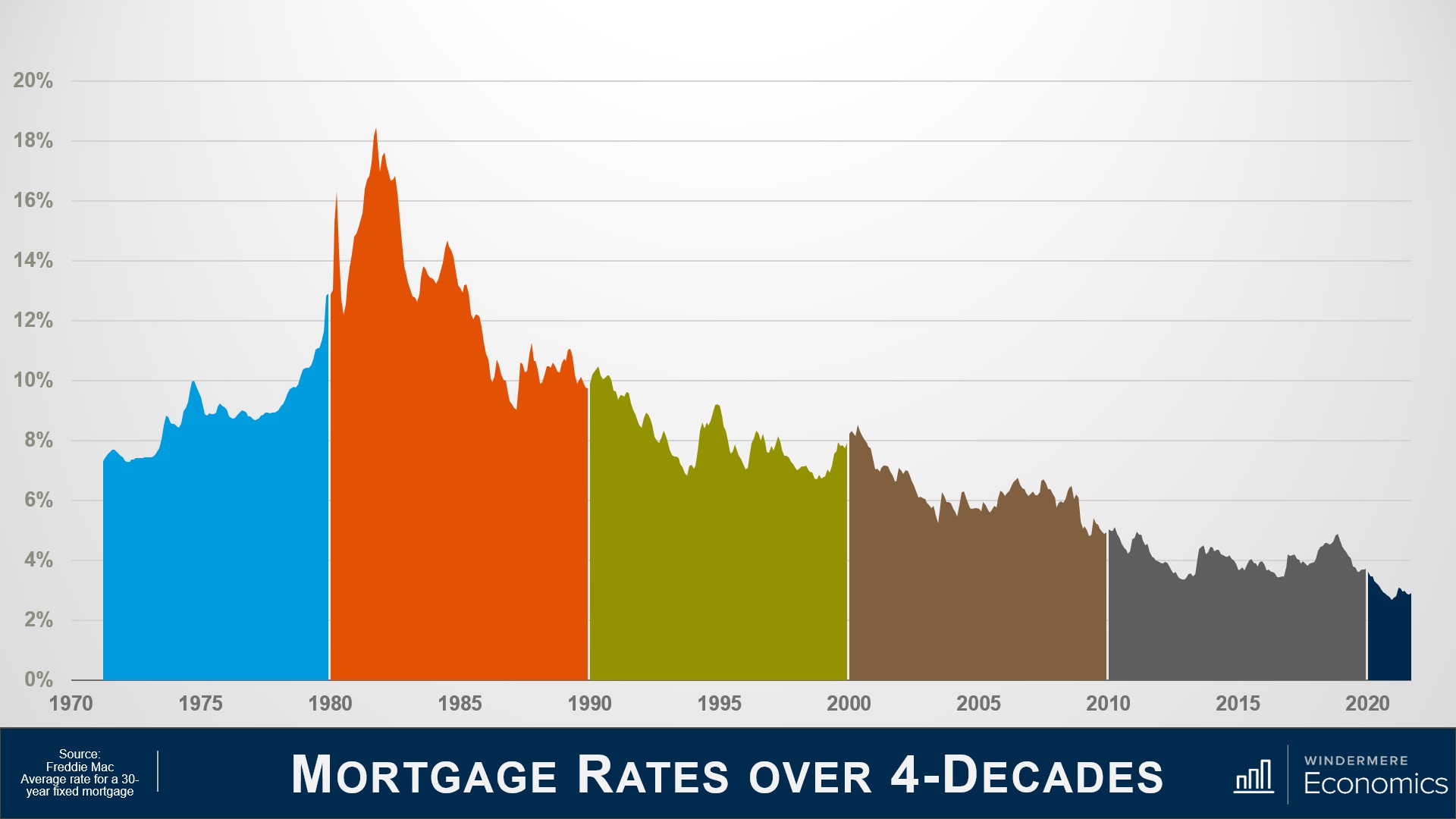 Back in 1971, rates were in the mid 7 percent range, rising to just under 10 percent in 1974, before pulling back. However, as you can clearly see, they started to spiral upward in 1977, ending the decade at almost 13 percent. If you’re wondering what led to this massive jump, this was because the country had entered a period of high inflation.

In the 1970s, the country was pushed into a recession basically due to an oil embargo that led to the price of oil quadrupling and that led to a period of so-called stagflation, which is when inflation rises and economic activity slows.

And in the early 1980s, we entered a period of so-called hyperinflation, as another oil embargo was took hold and the Fed was forced to step in and raised short-term rates, which led rates along the yield curve to rise.

This of course included 10-year treasuries which hit 15.3 percent in the fall of 1981 and that, as we have discussed, caused mortgage rates to hit an all-time high in October of 1981 at close to 18.5 percent. Rates then started to pull back.

In the ’90s, rates started to trend lower, but they jumped again in 1994 as the Fed tightened monetary policy given the significant growth that the country was seeing, but they started to pull back in the second half of the decade, falling to the mid-6s before notching higher in 1999.

In the 2000s, rates dropped to 5.3 percent in 2003 as the housing market boomed, but, as we all know, it wasn’t all unicorns and rainbows in this decade of what was then historically low rates.

The housing crash led the Fed to jump in by cutting interest rates, but they also started a massive purchase of mortgage bonds at very low interest rates as they were happy to take a low returns as long as it stabilized the housing market.

As a result of their efforts, mortgage rates fell almost a full percentage point, averaging just a hair above 5 percent in 2009.

Riding the wave of low bank borrowing costs, mortgage rates entered the new decade around 4.7 percent and continued to fall steadily, dropping to the mid-3s by 2012. But in 2013, you can see that rates headed higher. Why? Well, a big part of this has to do with some panic in the bond market, but we will get to that shortly.

They rose again after the 2016 presidential election, reaching their peak at the end of 2018 and start of 2019, but still ending the decade below 4 percent.

As for the current decade, well, it’s all been about COVID-19.

To understand what’s happened over the past couple of years, we need to look at the weekly average rate. I’m sure that you have noticed this spike. It was totally due to the coronavirus, which created an unprecedented situation for all rates (not just mortgages, but Treasurys and everything else). 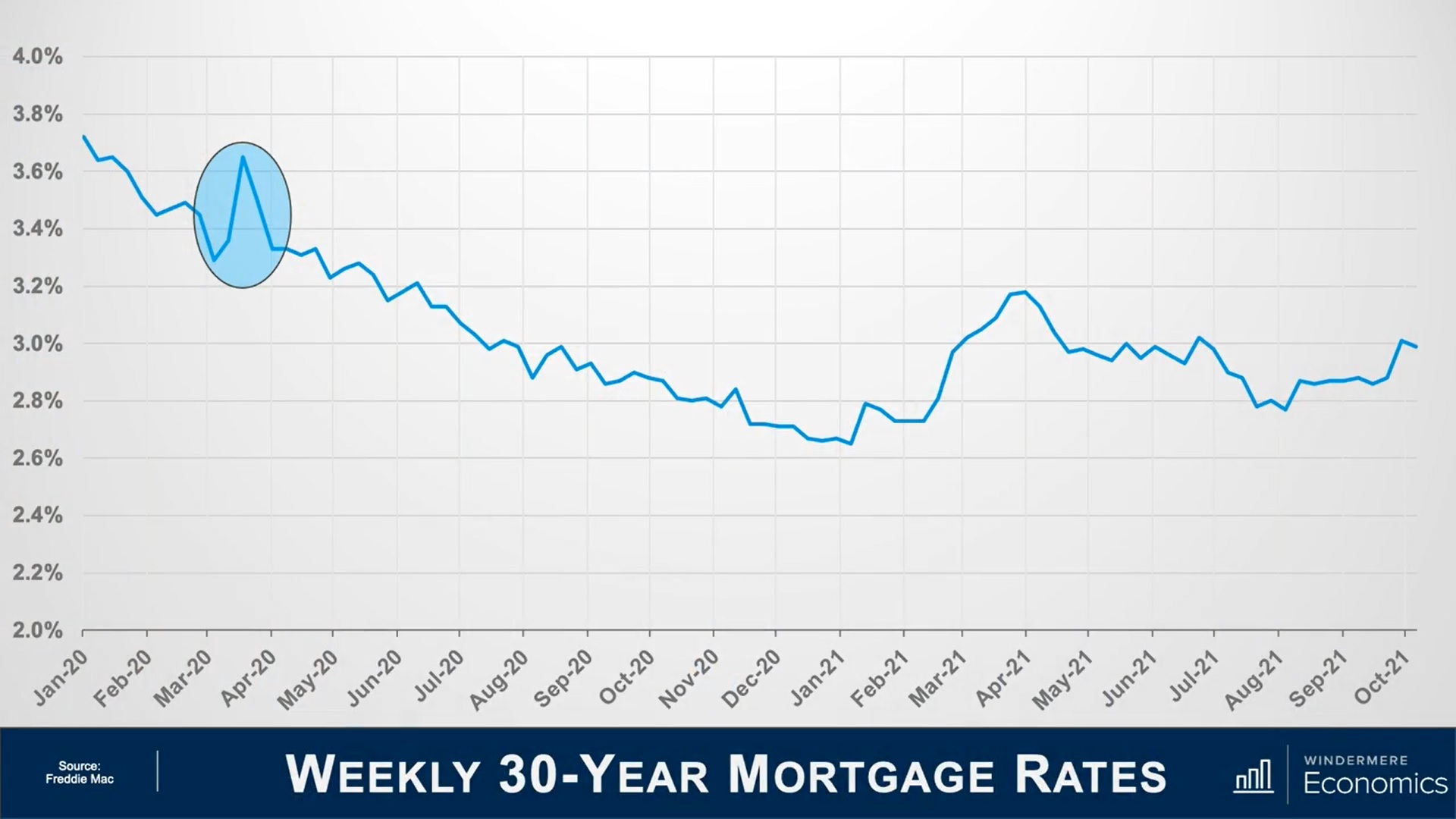 You see, investors were panicking during the early stages of the pandemic, not just because the country essentially shut down for a brief period, but there were rumors about a thing called “forbearance.”

Investors were panicking that they would not get paid for the mortgage bonds they held, and they did what we all do when we get worried about the economy and specifically, our investments.

They get out of their investment positions and into cash — and that’s absolutely what they did. However, I should add that I’m not talking about them stashing dollars under the mattress. No, they moved into cash positions in financial markets, which are the most liquid, nimble place an investor in the U.S. can be.

And with a lot of institutions and individuals getting out of bonds and not many buyers out there, what happened to rates? That’s right, they rose to attract buyers and rise they did. So much so, in fact, that on a single day in March of 2020, mortgage bonds prices changed five times! Quite unprecedented.

Anyway, the Fed reverted to its old playbook and went on a massive bond buying spree with the biggest ever purchase of mortgage-backed securities on Thursday, March 19, but quite remarkably, they announced the very next day that they were going to buy even more.

How much more, you ask? Well, they decided to buy three times more than the record purchase they made just the day before!

And because of this, rates dropped dramatically and continued to pretty much head lower for the rest of the year and into early 2021.

But then the music stopped.

You see, a special election was being held in Georgia, and the bond market decided to take a conservative stance prior to the election. That led rates higher again. But the election wasn’t the only reason why rates rose. 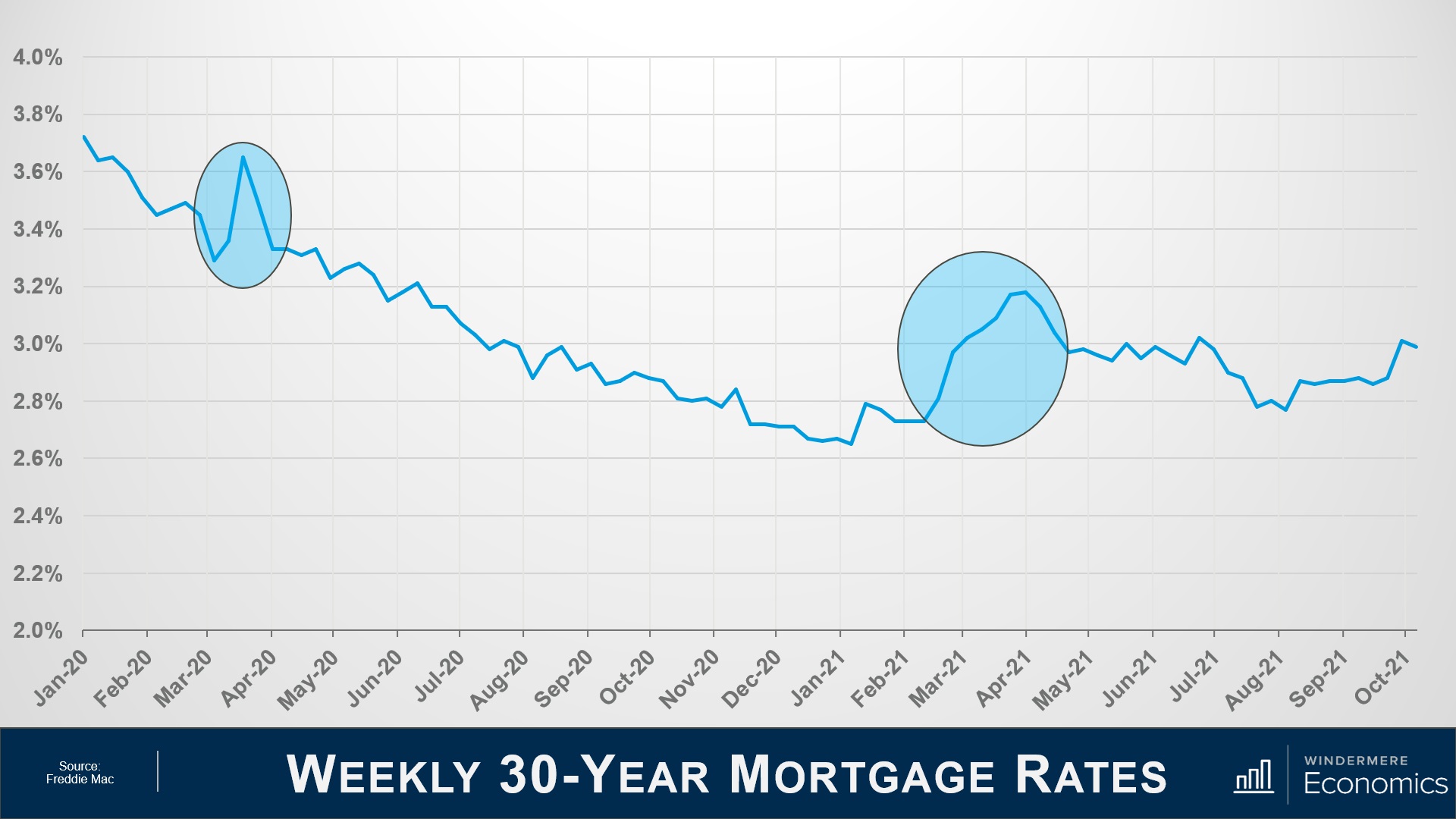 You see, COVID-19 cases that were dropping, improved vaccine distribution appeared to be in place, there were several stronger-than-expected economic reports released and progress on a fiscal stimulus package.

All of these factors led rates higher because, as you know, when economic news is positive, that’s actually bad for bond yields as people move back into equities and out of bonds. This is obviously bad for mortgage rates as bonds need to offer a higher interest rate to attract the few buyers that were out there.

So, that’s where we are today, but what of the future?

Here is my forecast for 10-year Treasurys through the end of next year. 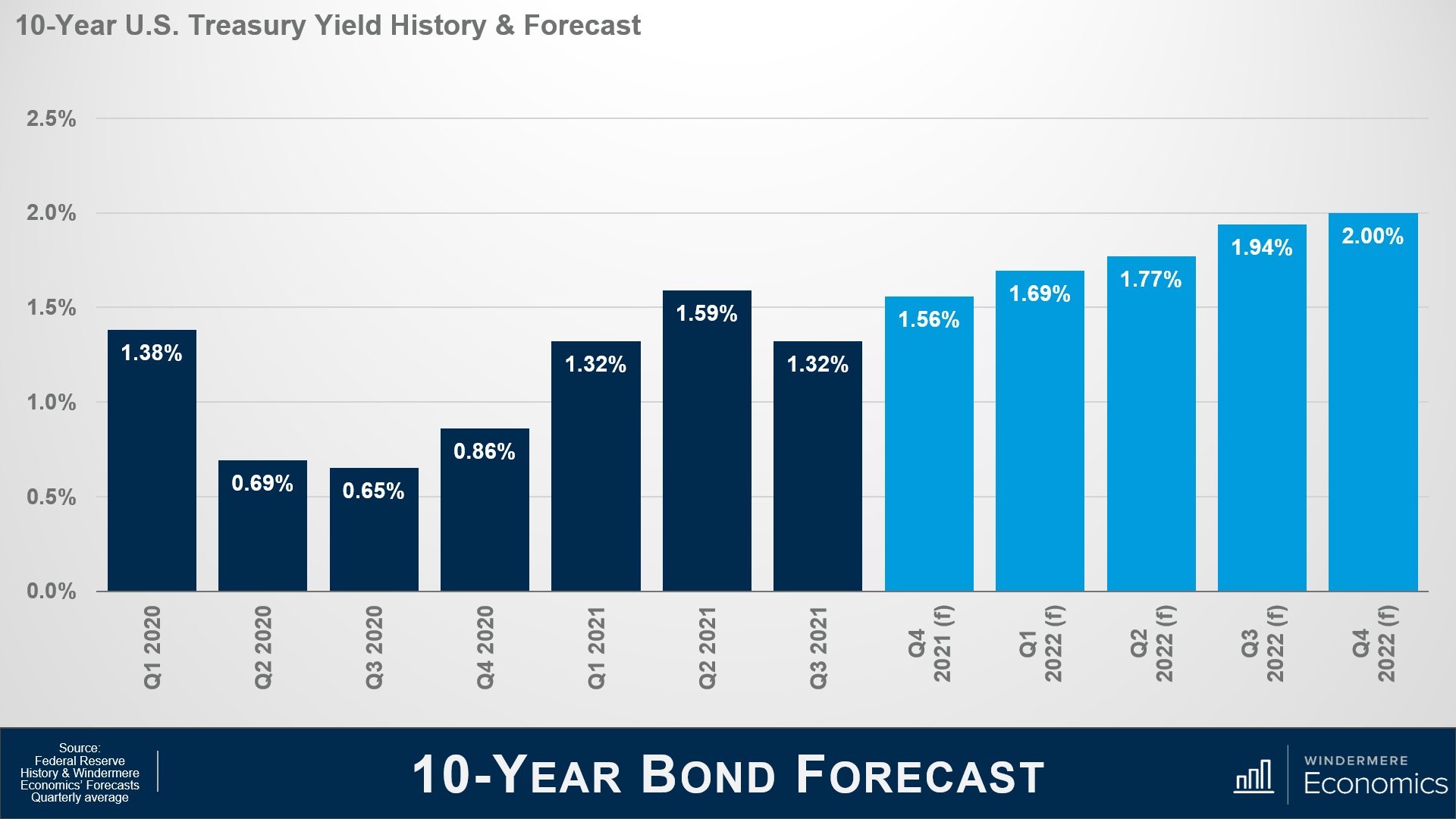 You will see that I’m looking for rates to rise gradually as we move into next year, and this will mean lead mortgage rates to start notching higher as well.

And here is my forecast for mortgage rates. 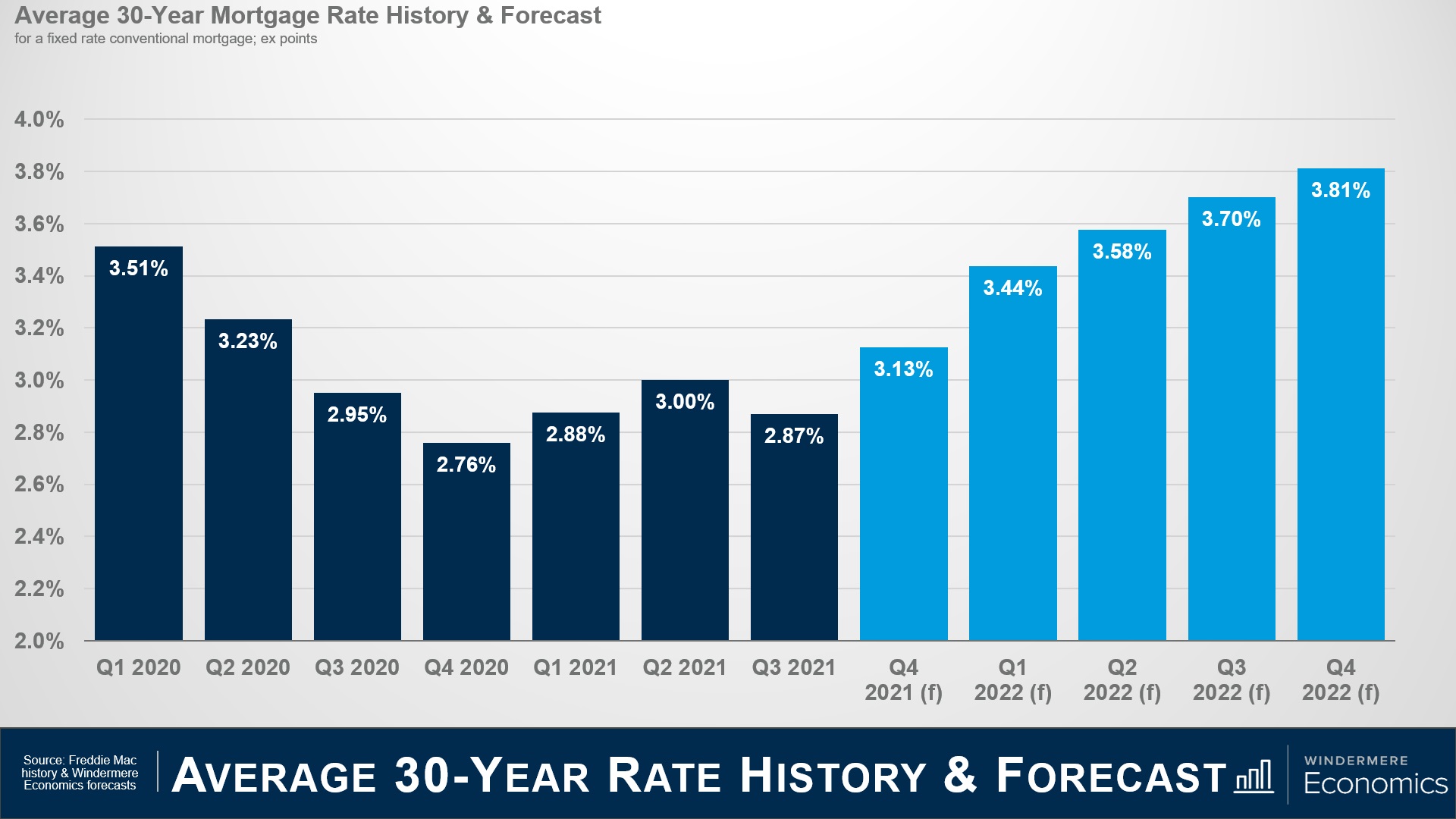 Although they should move higher, I am still not seeing rates break above 4 percent until 2023 at the earliest, and even as they start to increase, I really don’t see it as a major deterrent to homebuyers.

But before you start to say that this is only one person’s forecast, and it could be wrong, let’s look at my forecast compared to some of my industry colleagues.

As you can see, we are actually all in a pretty tight range when it comes to forecasting the average rate this year and next. 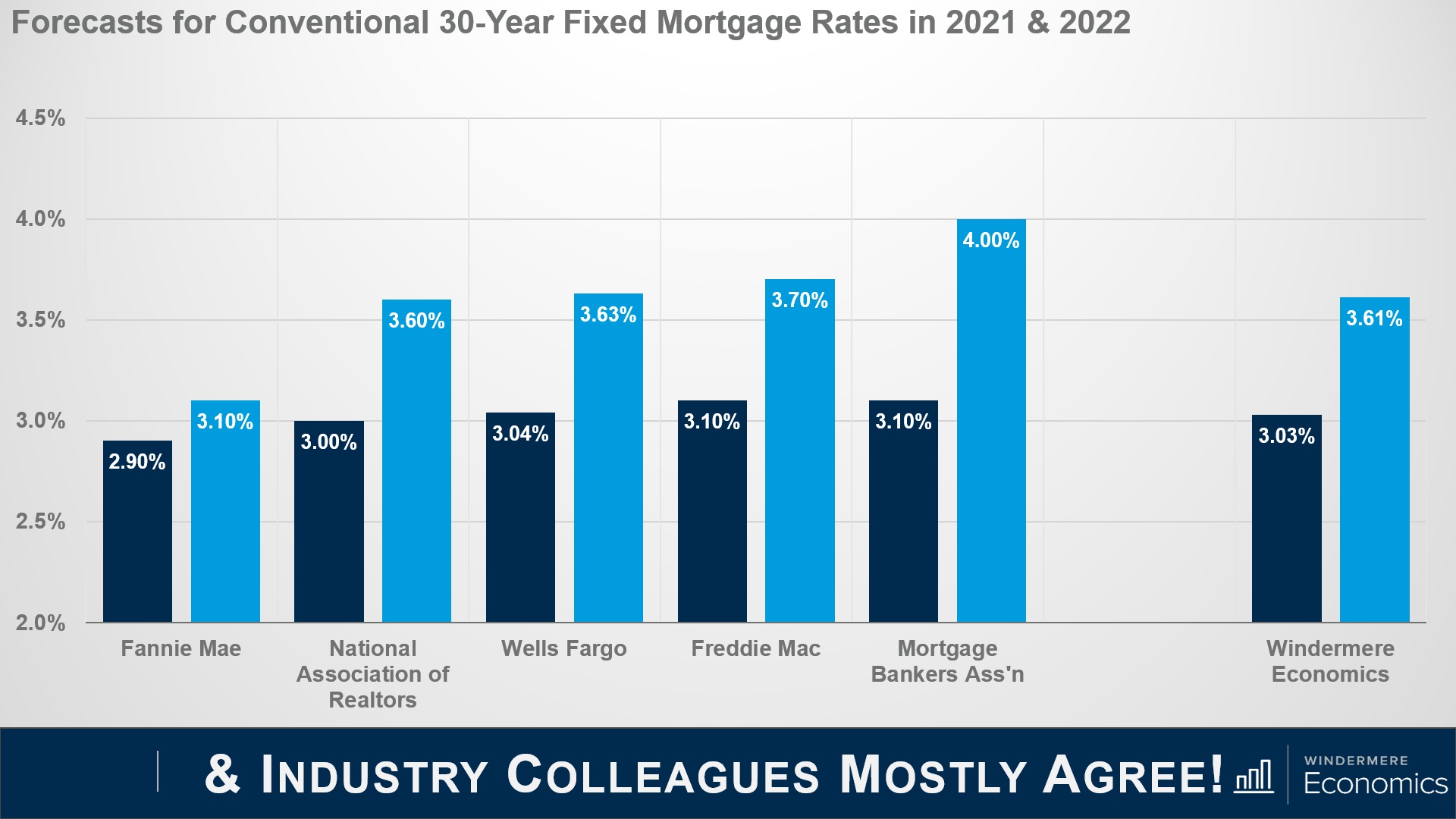 The bottom line is that although rates will rise, they will remain very competitive when compared to historic averages and the upward trend in rates is unlikely to have any significant impact on prices.

That said, many markets are already having an affordability crisis and rising rates will certainly act as an additional headwind to price growth; however, it would take a significantly greater increase in rates to negatively impact prices.