COVID-19 caused an unparalleled shock to the U.S. economy, and the Delta variant has certainly impacted the speed of recovery. However, Windermere Chief Economist Matthew Gardner firmly believes that the economy will continue to grow. Here’s his 2022 housing forecast.

Although many people — including myself — had hoped that COVID-19 would have become a somewhat distant memory by now and that the economy would have recovered, this was sadly not the case.

The pandemic’s influence on the economy is still being felt. All the datasets I track tell me that although we are certainly healing, COVID continues to act as a drag on economic growth, and I expect that to continue through the spring of next year — if not a little longer.

And it’s because of this that I, along with many other economists, have spent the past few months lowering our forecasts for economic growth — at least through the middle of 2022.

So, let’s look at this a little closer. Here is my forecast for economic growth through the end of next year:

You will note that, even though I’m cautious in regard to the economy as we move through the winter and into 2022, I’m still expecting to see a fairly decent bounce back in the fourth quarter of this year following the very disappointing rate that we saw in Q3. 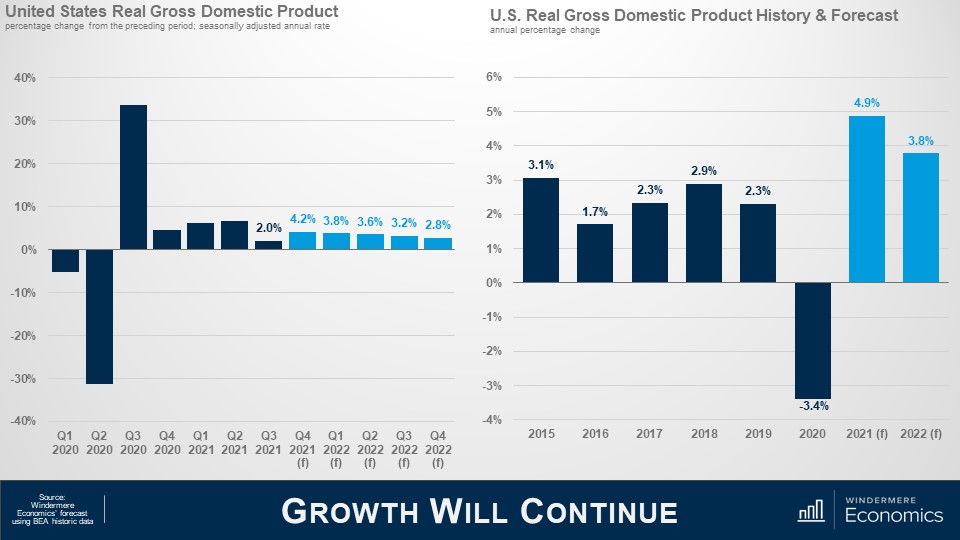 On an annualized basis, I believe that the economy will have expanded by just shy of 5 percent this year and come in a little below 4 percent in 2022.

Simply put, the impacts of COVID-19 are going to continue to act as a drag on virus sensitive consumer services next year, and ongoing supply chain issues will also delay inventory restocking. Both of these impacts have a depressing effect in more ways than one on economic growth, but I don’t see any chance that we will fall back into a recession.

Looking at the employment picture, this chart shows my forecast for average monthly growth in jobs during a quarter. 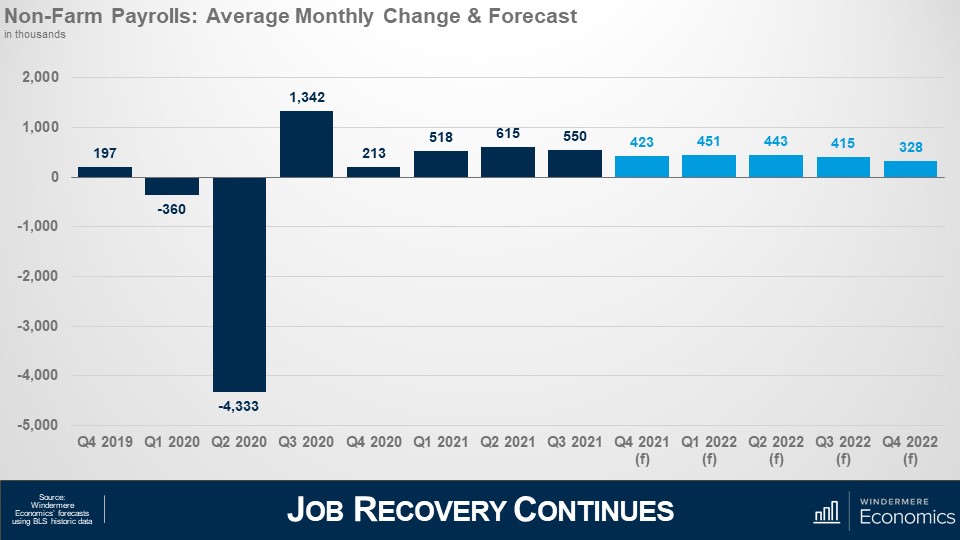 To give you some context, over the past decade or so, the country has added an average of around 200,000 jobs per month during any one quarter. My forecast is for more robust employment growth as we move through 2022. If correct, I expect to see the country return to pre-COVID employment levels in the second half of the year.

Back to full employment in 2022

And with jobs continuing to return, I’m looking for the unemployment rate to continue trending lower and breaking south of 4 percent during the final quarter of the year. 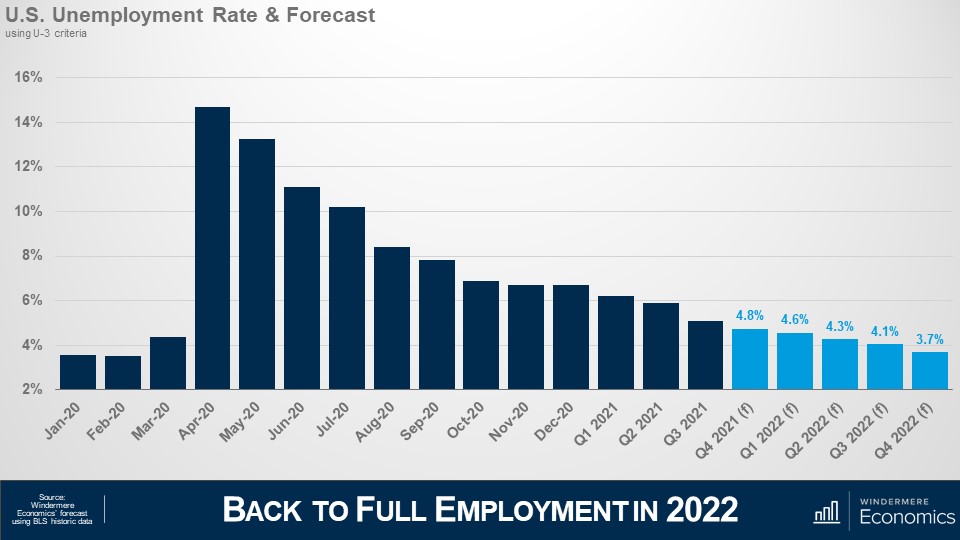 With the expiration of enhanced unemployment benefits — in concert with wages rising significantly in many face-to-face industries such as leisure and hospitality — prospects for people currently unemployed are looking rather good.

That said, there are still millions of unemployed Americans who are not looking for work even with wages rising. The labor force still down by 3 million from its pre-pandemic peak. This is worrying as businesses continue to have a hard time finding employees, which raises the expectation that inflation will remain higher for longer than I would have liked to see.

And that leads nicely into my final economic forecast and that is my outlook for inflation. As we have discussed, supply chain issues and labor shortages have increased prices significantly.

This top chart shows annual changes in all consumer prices which I expect to remain around 5 percent until next spring, before gradually dropping down to below 3 percent by the end of the year. 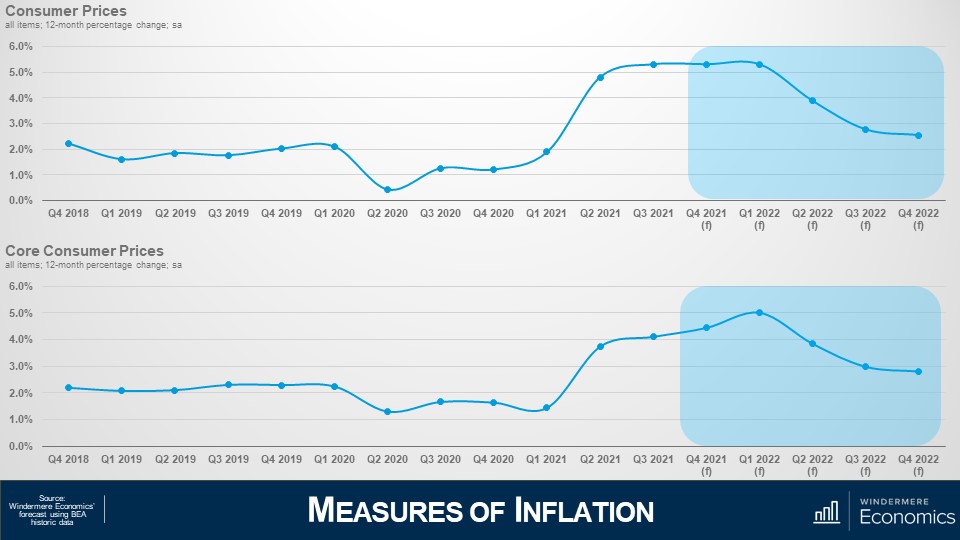 But the core inflation rate — which excludes the volatile food and energy sectors — won’t peak until early next year before it too starts to gradually pull back.

At these levels, the Federal Reserve will undoubtedly have started to raise interest rates to counteract inflationary pressures. 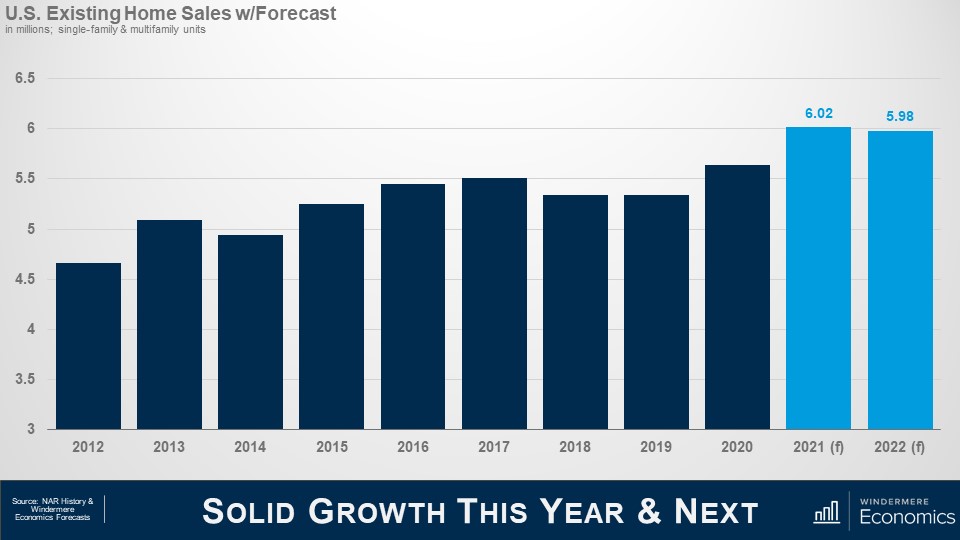 This is not pretty, but I absolutely do not believe that we are in some sort of inflationary spiral or that “stagflation” will raise its ugly head again.

OK, now it’s time to turn our attention to the U.S. housing market, which was a beacon of hope during the pandemic period. Given the massive spike in demand that started last June, I’m looking for a little more than 6 million existing homes will have changed hands in 2021.

But I don’t see this level increasing in 2022, mainly due to ongoing supply limitations as well as rising affordability issues.

I’m therefore forecasting sales to pull back, albeit very modestly, next year. That said, the country has never seen more than 6 million homes sell in a single year since records were first kept, so the number is still very impressive.

And with the market as tight as it has been so far this year, it shouldn’t be any surprise to see median sale prices skyrocketing. Even though we have three more months of sales data yet to be released, I still anticipate prices will have risen by almost 16.5 percent in 2021 — a quite remarkable number. 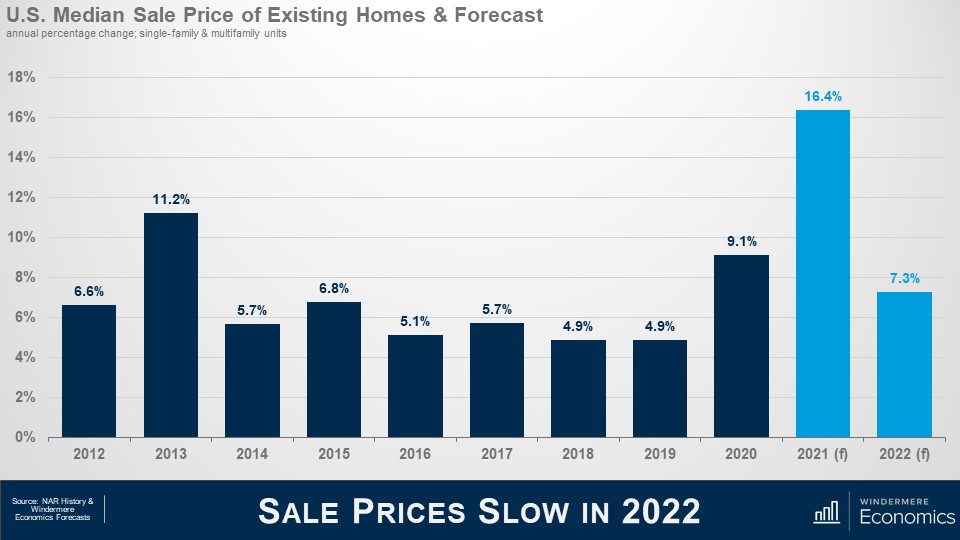 This pace of appreciation has never been seen before. In fact, the closest was back in 2005, when the housing bubble was inflating rapidly. But even then, prices only rose by 12.2 percent.

However, as I mentioned in my sales forecast, this pace of growth is unsustainable, and I’m expecting to see some of the heat to come off the market next year. That said, a growth rate of 7.3 percent is certainly nothing to sniff at.

There are three major reasons we will see the pace of growth slow. I have already mentioned my concerns regarding housing affordability, but mortgage rates and new supply will both influence the slowdown in sales and price growth in the resale arena.

Although I do not prepare a forecast for housing affordability, this is my where I expect to see mortgage rates through the end of next year. 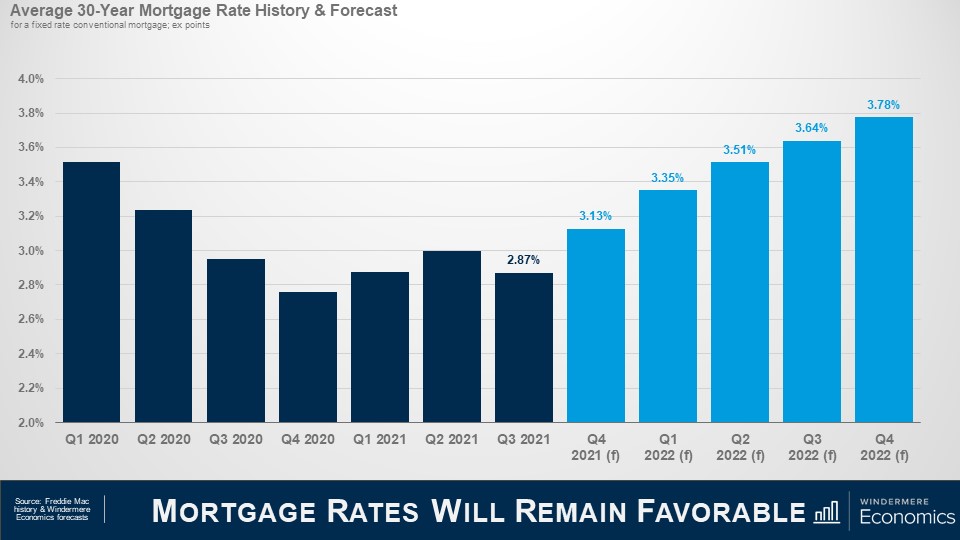 I’m looking for them to continue “stair-stepping” higher but still ending 2022 below 4 percent — very low by historic standards given that the long-term average for a conventional 30-year mortgage is somewhere around 7.5 percent.

Obviously, as rates notch higher, that starts to compress price growth as it puts a lower ceiling on how much a buyer can afford to pay for a home.

And slowing growth in existing home prices and sales will also be a function of additional supply. This chart shows my forecast for single-family starts this year and next. I expect more than a million homes to start construction in 2022, continuing the trend that started in mid-2020. 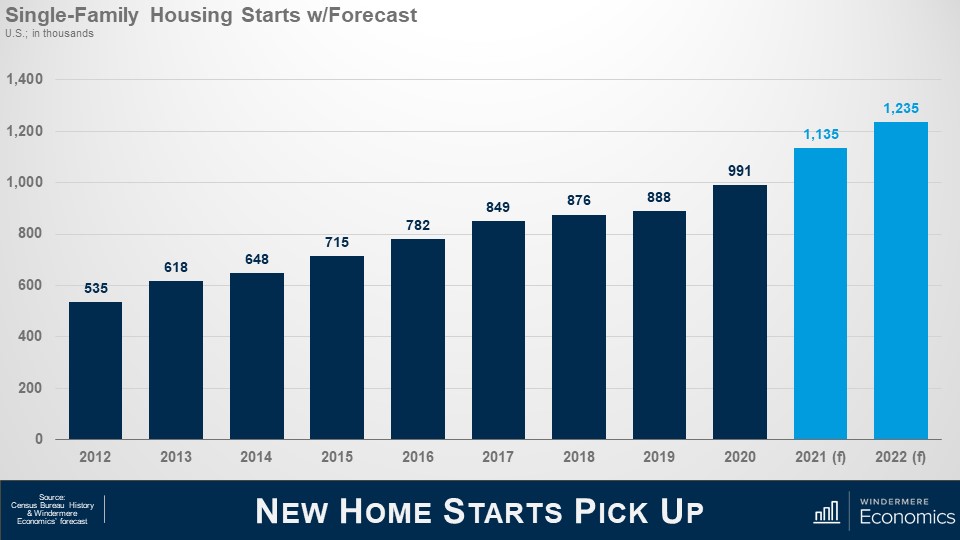 But I am sure that some of you may be asking yourselves that if starts are already robust, how have existing-home sales been able to increase so significantly if there has been solid supply coming from homebuilders — and that would be a great question.

I would answer this by telling you that the way the census gathers data on starts is to count the number of home foundations that have been poured, but vertical construction has not necessarily started.

And what we have been seeing is a lot of foundations but not so many homes actually being built — and we know this by looking at the number of homes that are for sale but have yet to be started.

So, it’s important to look at a separate number that the Census Bureau also puts out which counts the number of units actually under construction, and that number has been growing significantly over the course of the last 18 months or so.

Builders have been hamstrung with rising labor and material costs which will lead new home sales this year to fall below the number seen in 2020; however, I do expect this to pick up significantly next year. My current forecast calls for 927,000 new homes to be sold in 2022. 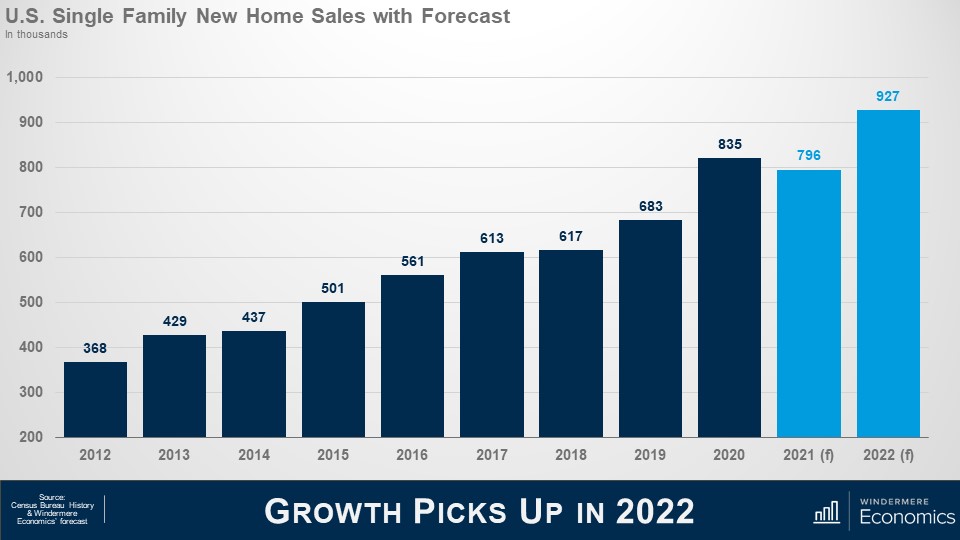 So, there you have it, my economic and housing market forecast for 2022.

Of course, there are still a number of variables that could lead me to revise this forecast but, as an old economics professor of mine used to tell me, “Gardner, forecast well, but forecast often!”

If everything goes according to my plan, you should expect to see the housing market start to move toward some sort of balance next year, but I am afraid that it will still remain out of equilibrium until at least 2023.

And if you’re wondering, no, I don’t see a housing bubble forming. I’m also not at all concerned about homeowners currently in forbearance. But it would be silly to say that there aren’t any issues in the housing market that concern me because there are, and the biggest of which is housing affordability.

This will have a significant impact on the millennial generation who are continuing to get older, and many are thinking about settling down and, possibly, having children.

I wonder how hard it will be for many of them to be able to afford to buy their first home because most really do want to become homeowners. Will builders figure out how to build to this massive pent-up demand? I guarantee you that whoever can solve this puzzle will do very, very well.

COVID-19 caused an unparalleled shock to the U.S. economy, and the rise of the Delta variant has certainly impacted the speed of our recovery, but rest assured, this particular forecaster firmly believes that we will recover and that the economy will continue to grow.

Demand for ownership housing remains remarkably buoyant, and in fact, it is quite likely that demand may actually increase with the work-from-home paradigm that will start to gain momentum next year. It will be fascinating to watch how this impacts not just demand, but where these buyers will ultimately choose to live.