On Friday, Zillow filed a motion to compel REX to identify employees who left the discount brokerage with laptops that could hold evidence relevant to an ongoing antitrust lawsuit.

After reports that departing employees of REX Real Estate were allowed to keep their laptops as “severance” and that one employee wiped potential evidence from her laptop, Zillow has asked a federal court to order the discount brokerage to turn over a list of the 250 or so employees who have left REX since January 2021 and to state whether they were allowed to keep REX-issued laptops.

Separately, the National Association of Realtors has asked the court to force REX’s insurer, PIUS Limited, to turn over internal documents related to PIUS’s evaluation of REX and the funding that PIUS secured for REX earlier this year.

On Friday, Zillow filed a motion to compel REX to “[i]dentify all employees (by name, last position/job title held while employed at REX, and last day of employment at REX) who have left REX, including any employees whose employment was involuntarily terminated, since January 2021 and state whether such employees were permitted to retain any REX-issued laptops.”

Prior to filing the motion, Zillow became aware of a May 8 Glassdoor review left by a former REX employee who wrote, “When you lay people off, don’t tell them that their laptop is their severance.” 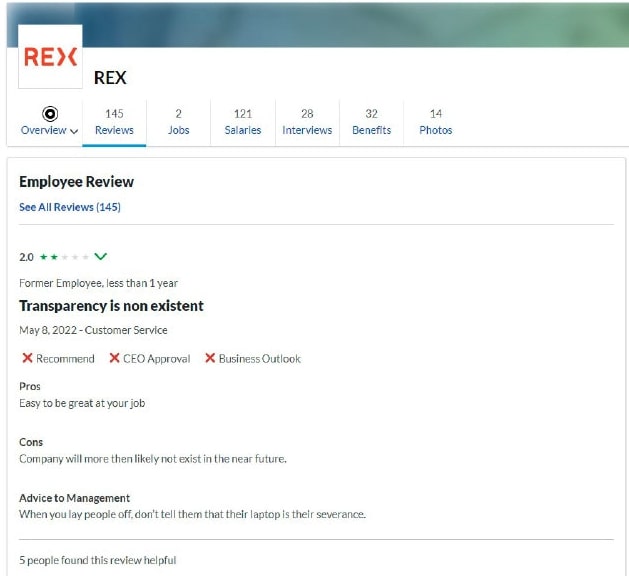 Screenshot of a Glassdoor review included as an exhibit in Zillow’s Aug. 19 motion to compel

According to Zillow’s filing, REX also admitted that a former employee, Angela Cook, had “wiped her laptop after she was let go” from the company, despite the court designating her a document custodian in the case. That and REX’s alleged relinquishment of its laptops indicate that REX may not be meeting its obligations to preserve documents, according to Zillow.

“Given REX’s allegations that its business faltered and failed as a result of actions taken by Zillow and NAR, the information contained on the laptops of its former employees, which may shed light on, among other things, other reasons for REX’s failings entirely unrelated to Zillow or NAR, is not only relevant but potentially critical to Zillow’s defenses,” Zillow’s attorneys wrote.

“If former REX employees … have taken with them or destroyed information relevant to the parties’ claims or defenses that REX has not otherwise preserved, Zillow is entitled to know,” they added.

“This information should be readily available to REX, and any burden or expense of providing this information is small in comparison to the relative importance of these issues to the litigation.”

In an emailed statement, National Association of Realtors spokesperson Wes Shaw told Inman: “NAR shares Zillow’s concerns. REX’s actions raise serious questions about whether it complied with its obligations to preserve documents that are relevant to the case.”

REX did not respond to requests for comment, but in a July 1 response to Zillow’s request for the list of employees, REX objected to the request “as being vague, overly broad, and unduly burdensome insofar as it seeks information on ‘all employees . . . who have left REX.'”

REX also said it had already provided information regarding the laptops of employees potentially relevant to the case.

“REX has let about 250 employees go since January 2021 due to Zillow’s and NAR’s anticompetitive conduct,” REX’s attorneys wrote.

“The overwhelming majority of those employees were salaried agents and non-managerial employees, whose employment at REX had no or at most de minimis relevance to the issues involved in this case. Accordingly, this interrogatory is seeking information not relevant to any party’s claim or defense nor is it proportionate to the needs of this case.”

In a separate filing, NAR filed a motion to compel PIUS to comply with a subpoena for documents in the case.

PIUS is an insurance agency that insures loans from institutional investors to high-growth tech companies based on an in-depth assessment of a company’s technology and intellectual property portfolio, according to the agency. PIUS underwrote a $10 million private placement bond for REX in a deal announced in March.

“In the underlying suit, REX claims it was harmed by a purported conspiracy between NAR and Zillow,” NAR’s attorneys wrote.

“But there is no such a conspiracy and REX failed because its product and services were poor and its marketing deceptive. Thus, since PIUS reviewed REX immediately before it failed, it likely has information about: (1) the quality of REX’s technology, services, and marketing; and (2) the health of REX’s business.”

“Moreover, PIUS’s analysis and evaluation of REX is relevant to REX’s (not yet specified) damages claim; especially to the extent those claims depend on any valuation of REX as a going concern,” they added.

The subpoena seeks “[a]ll communications referencing REX sent between your members, managers, or employees” and all documents:

“PIUS objects to the request on the grounds that it is overbroad on its face to the extent it seeks ‘all documents’; seeks information that is neither relevant to any party’s claim or defense nor reasonably likely to lead to the discovery of admissible evidence nor proportional to the needs of the case; seeks the disclosure of privileged and/or confidential information; and imposes an undue burden and expense upon PIUS,” PIUS’s attorneys wrote.

Editor’s note: This story has been updated with an additional comment from NAR saying PIUS has not complied with the trade group’s subpoena.

Watchdog: No relationship between commissions and home prices