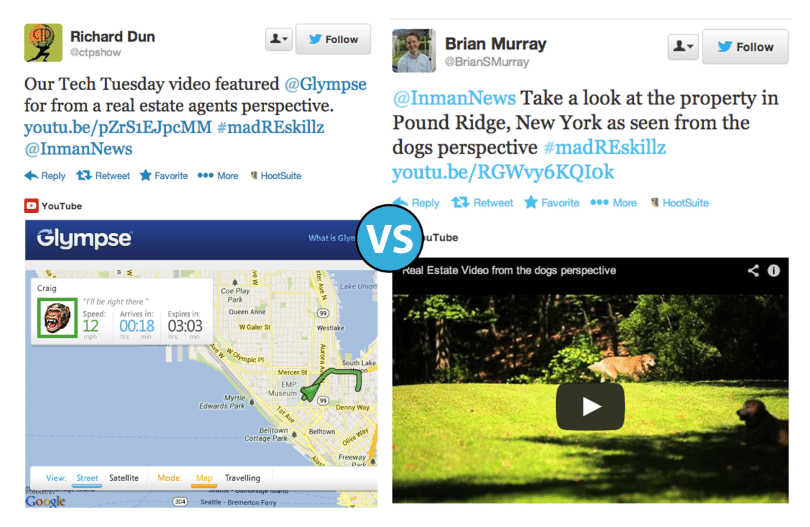 Editor’s note: The #madREskillz finalist who receives the most votes in the poll below will be featured in an Inman News story. Click here to learn how to participate in Inman News’ weekly #madREskillz competition. Voting closes 10 a.m. Eastern time Monday, Jan. 13.

1. Richard Dun, an agent at American Homes of Staten Island, uses Glympse to text message a link to clients that they can click to pull up a map that shows Dun’s location in real time.

Glympse “adds a special touch to my showings or when I’m meeting with clients,” he said in a YouTube video explaining the app. “Instead of telling people where I am or how long till I get there, I send them a Glympse and it lets them know exactly where I am, and they can follow me on a map until I get there.”

2. Houlihan Lawrence agent Brian Murray produced a video that captures one of his listings through the eyes of a golden retriever.

“There’s all this space, all this land to run around and dream about, and they leave during the morning for work,” our four-legged narrator tells viewers in a thick Australian accent. “There’s that big tub of water the humans call the pool. They spend all this time telling me to get out. I’ve never actually ever seen them get in!”

'Feast and Feeds,' framed keys, cartoons and other #madREskillz