HOUSTON — Zillow doesn’t want to cultivate the growth of pocket listings as we know them; it wants to “co-opt” them, according to Errol Samuelson, chief industry development officer at Zillow.

The goal of Zillow’s new “coming soon” feature is to “change the notion of ‘pocket listing’ to something that’s more transparent and egalitarian in the sense that the listing is available for everyone to see,” and not just a “cloistered group,” said Samuelson, speaking on a panel on the future of online real estate at the National Association of Real Estate Editors’ (NAREE) spring conference.

“Coming soon” allows agents, brokers and multiple listing services to market homes on its site up to 30 days before listing them on the MLS. The feature is restricted to agents who advertise with the portal and the brokerages and MLSs who provide Zillow their listings in a direct feed.

Pocket listings are becoming increasingly prevalent in the real estate industry. A recent study by CoreLogic suggested that nearly 50 percent of homes sold last year were sold outside of the MLS.

Along with inventory shortages, new technologies such as social media, listing sites and internal communication platforms like Yapmo are fueling the growth of pocket listings. Bob Hale, CEO of the Houston Association of Realtors, suggested that the expanding social media network Nextdoor could “easily become a way for neighbors” to sell homes off the MLS.

All of this “could lead to the demise of the industry as we know it today,” he said. Zillow’s coming soon feature, he added, “has dramatic implications for the industry.”

Because agents can restrict who they tell about their pocket listings, it’s easier for brokerages to keep such deals in-house, with the buyer and seller represented by different agents at the same company (a practice regulated as “designated agency” in many states). Of more concern to critics are “dual agency” deals, in which the agent represents both the buyer and seller. Critics say that the reduced exposure a pocket listing receives may result in a lower sale price.

A number of agents have taken issue with Zillow’s “coming soon” feature because they believe that it facilitates dual-agency transactions, just like other off-MLS marketing methods.

“It will foster dual agency and make the MLS services even more irrelevant than they already are,” commented Sandra Paulow, an associate broker at Pinetop, Arizona-based Aspen Properties. “Who needs an MLS if we are just going to sell our own listings anyway?”

But Samuelson argued that “coming soon” is a desirable alternative to the sort of off-MLS marketing that has traditionally incubated dual-agency transactions because it exposes off-MLs listings to the public, not just a “closed club where only a privileged few agents get to see the listing.”

In fact, the feature even places “coming soon” listings above conventional listings on search results pages, he said.

“The goal is to help agents test prices” and “give a head start on marketing a listing before it goes into the MLS,” he said. 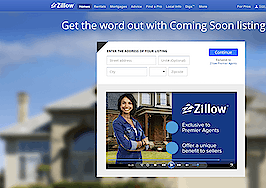 Zillow's new 'coming soon' feature puts pocket listings on steroids
Back to top
Keep up-to-date on tools and tactics to impress your clients and outshine your competition with the 2022 virtual bundle.Register Now×
Agent Appreciation Sale: Inman Select for only $85.CLAIM OFFER×
Inmanpot
Log in
If you created your account with Google or Facebook
Don't have an account?
Create an Account
Forgot your password?
No Problem