The world of credit market professionals was rocked last week, even those in the Home for Old Traders, by release of the Federal Reserve’s minutes from its April 27 meeting. A few civilians got a glimmer in minor changes in mortgage quotes, but even in global currency and stock markets the Fed-shock passed quickly.

The world of credit market professionals was rocked last week, even those in the Home for Old Traders, by release of the Federal Reserve’s minutes from its April 27 meeting.

A few civilians got a glimmer in minor changes in mortgage quotes, but even in global currency and stock markets, the Fed-shock passed quickly. In open ocean the wave from an undersea earthquake is invisible, a tsunami only when reaching shore.

Each Fed meeting concludes with a single-page statement, and the April 27 one was benign, bi-lateral hedging appropriate after the GDP (gross domestic product) stall in the first quarter (Q1).

Meeting minutes released three weeks later run to a dozen pages describing the internal discussion. Opinions of participants are weighted by numbers (some, a few, several, many…) but anonymous, hence hard to tell whether wing-nuts had a big day signifying nothing or a consensus formed around the Chair.

On Wednesday these minutes hit hard (see charts below), but 48 hours later had fizzled. The minutes seemed completely at odds with the original statement, an overt threat: “Most participants judged that if incoming data were consistent with economic growth picking up in the second quarter…then it likely would be appropriate to…increase the federal funds rate in June.”

New data have indeed shown a rebound from the Q1, and post-meeting every Fed speaker has read from the same script: Financial markets have underestimated the future fed funds rate. The warning could not be more clear.

Yet Fedologists, even good ones, by today generally agree that a June hike is merely “on the table.” Granted, June might get a pass because of the Brexit vote just a week after the Fed’s meeting. However, we’ve entered some truly weird Fed-space.

Are we back to 2014-2015, the Fed yelling “wolf”? Is the Fed trying to jawbone markets into tightening for it? Who is right, markets priced (barely) for one hike by the end of the year, or the Fed choir insisting on two or three, and then beyond?

Fedologist colleagues notwithstanding, Fed communication in the last 30 days has been either the worst on modern record, or markets domestic and global are set up for a bad surprise. The Fed is going to raise its rate every 90 or 120 days if the economy continues on its current slope: 2 percent GDP, 150,000 or more jobs each month, core inflation still below 2 percent, and incomes growing no more than 2.5 percent.

Enter politics. Senior Fed people close to the Chair for two years have insisted that current growth is unsustainable. They target GDP at 1.75 percent or less, and less than 100,000 jobs each month. Their conclusion rests on one set of assumptions: population is growing about .75 percent per year, and productivity is growing only 1 percent, therefore the non-inflationary speed limit is 1.75 percent.

Nevermind that productivity measurements could be off by a couple of percentage points, and the productivity throughput to inflation is hazy at best, and in a deflationary outside world, possibly immaterial.

The Fed intends to brake the economy to a lower level than now, and thinks it can “fine-tune” this way without aborting recovery, and even if it does abort should pre-empt our unsustainable overheating.

Meanwhile both political parties promise accelerating growth, jobs and wages, especially for the half of the country worst-hurt by foreign competition. The Fed may feel some June-July urgency, fearing that an August-October move might be noticed by someone running for office who would pitch a fit.

Granted, the Fed is and should be independent. After one of its greatest errors ever (the credit bubble), in the last 10 years the Fed has been the one government institution to do its job, courageous and inventive. But, a unilateral decision to slow the economy from its current state, in the name of “normalization” in a world in which normal is unknown and certainly does not include working the way it used to…?

I do not want this election to politicize the Fed, especially by the Twitter-bomber in the orange Wayne Newton fright wig. But if it does, it will be no one’s fault but the Fed. Somebody has to explain to the people why this economy is better than we can do. 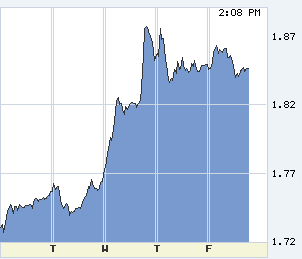 The 10-year T-note in the last week. Guess when the minutes were released. Then ask, where’s the up-side follow-through? 10s haven’t even made it back up to the April 26 high at 1.92 percent. 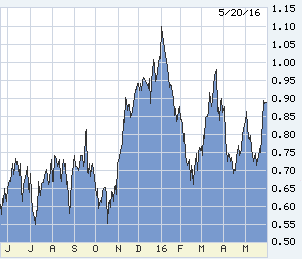 The ultra-Fed-sensitive 2-year T-note in the last year.

The ultra-Fed-sensitive 2-year T-note in the last year. These guys reacted to the minutes, but barely — this week up from 0.78 percent to 0.85 percent, pricing-in no more than one hike this year, if that. 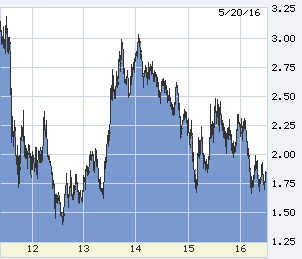 The 10-year T-note back five years.

The 10-year T-note back five years. We have failed repeatedly to go lower each time we’ve approached the 2012 low, three times already in 2016. 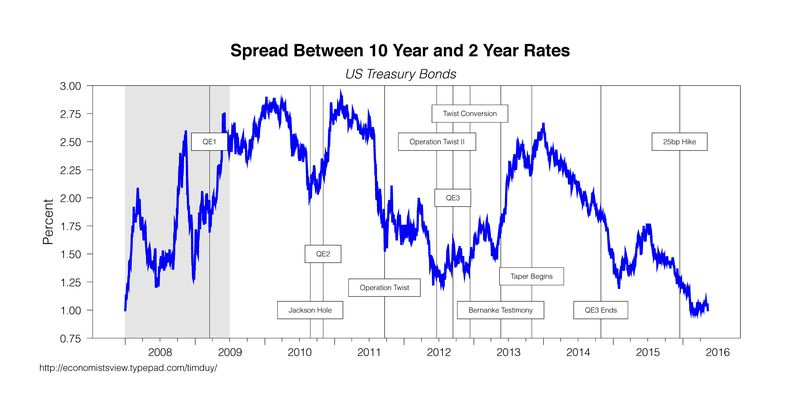 In mortgages we don’t care what the Fed does to the overnight cost of money and the 2-year T-note, so long as the 10-year stays low.

In mortgages we don’t care what the Fed does to the overnight cost of money and the 2-year T-note, so long as the 10-year stays low. So far, so good, 10s staying put and the spread narrowing (chart going back eight years). 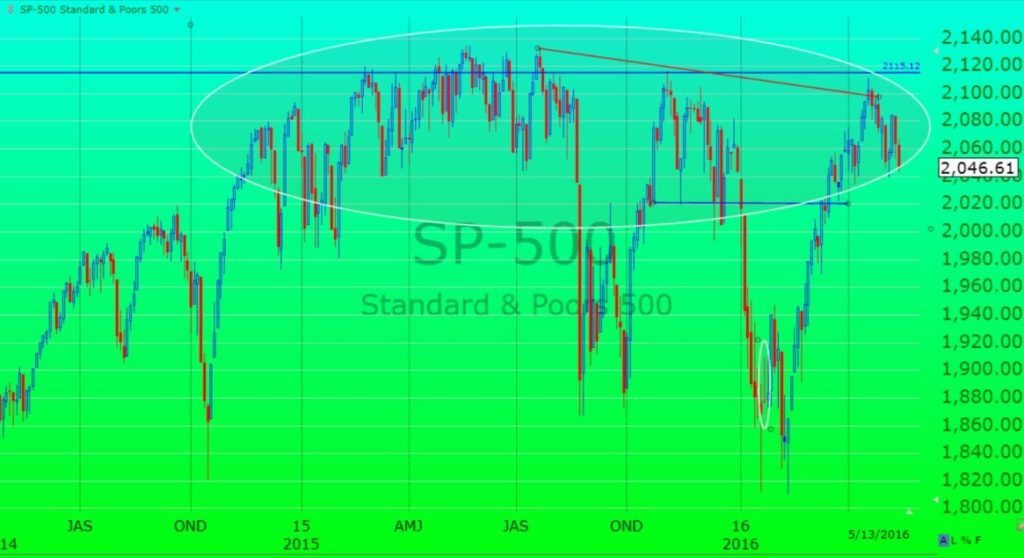 Stocks may be more vulnerable than the 10-year.

I know nothing about stocks, but a friend sent this chart showing a descending triple-top. Stocks may be more vulnerable than the 10-year. 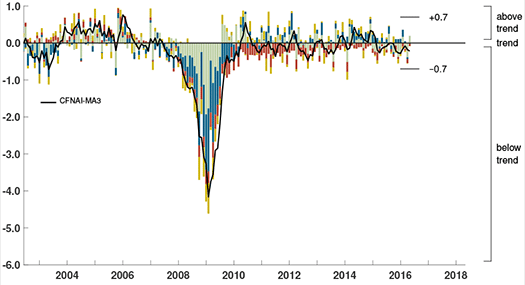 The Chicago Fed’s 85-component measure of the economy, if anything down-trending, and way inside the +0.7 inflation danger zone.

The Chicago Fed’s 85-component measure of the economy, if anything down-trending, and way inside the +0.7 inflation danger zone. If the Fed intends to slow the economy from current trend it must do a better job of explaining. 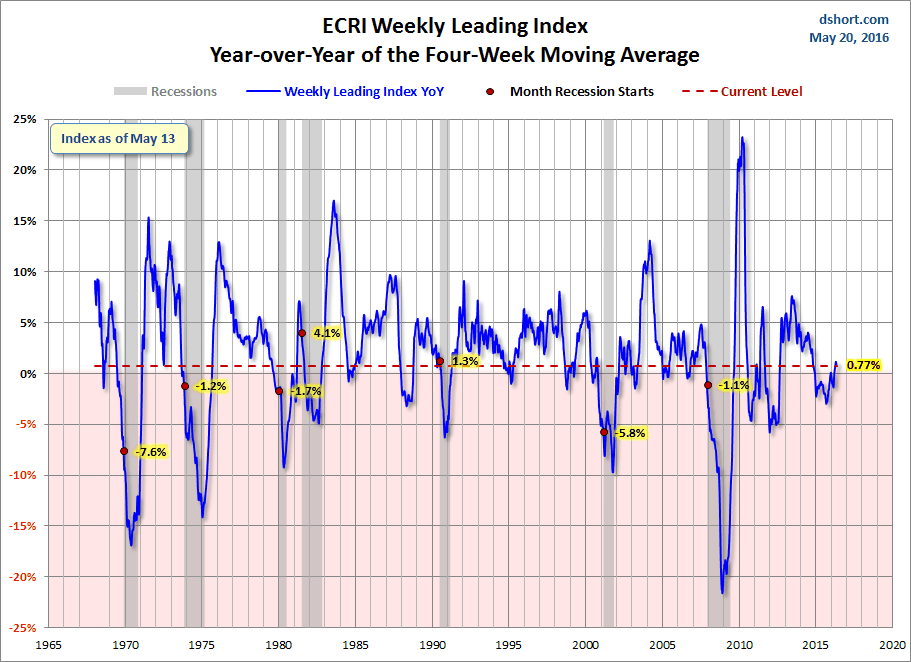 The ECRI’s 50-year track record, only one false call of recession.

The ECRI’s (Economic Cycle Research Institute’s) 50-year track record, only one false call of recession. It has enjoyed a minor rebound in 2016, but from just above a recession signal in 2015. Hardly an unsustainable rocket. 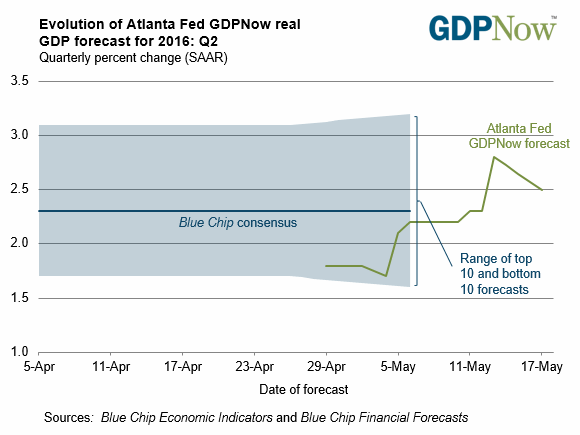 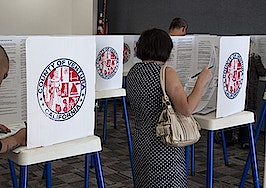 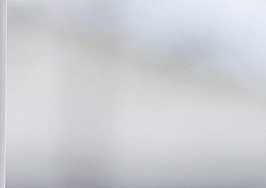