Modern moms and dads with adult children at home apparently have at least one ground rule: We’ll share a roof, but not a bathroom.

An infographic and expert analysis by LawnStarter suggests that parents who welcome their kids with open arms are perhaps finding comfort (and sanity) in large spaces — specifically, those with plenty of rooms for showering and sleeping.

Multigenerational families in one home are perhaps finding comfort (and sanity) in large spaces.

U.S. Census data shows that in 2015, the number of new single-family homes sold that had four-plus bedrooms (53 percent) and three or more bathrooms (41 percent) reached an over 30-year high. Houses have naturally expanded to accommodate this need; in 1975, your typical new construction single-family amassed 1,975 square feet, compared to 2,600 square feet today.

RealtyTrac’s Daren Blomquist, a specialist in housing data and analysis, believes this trend is being fueled by the rise in multigenerational housing.

With only 8 percent of new single-family builds boasting triple bathrooms in 1978, the idea of moving in together was ostensibly less appealing. Now, families can cohabitate without re-living the high school morning trauma of cramped elbows and fire-prone power strips holding the weight of three hair contraptions.

Adult families are cohabitating without re-living the morning trauma of a shared bathroom.

“We love our bedrooms and bathrooms,” wrote LawnStarter’s John Egan. (Except, of course, when we have to clean them.)

Multigenerational housing: under one peaceful roof

Which demographic segments are propelling joint living situations? A 2015 study from the Pew Research Center concluded that despite improved job conditions, more millennials were moving in with family. Strapped by debt or just really tight with the ‘rents, 26 percent of young adults opted to live with mom and dad last year (up from 24 percent in 2010.)

“Part of this acceptance is brought about by cultural changes influenced by a higher percentage of foreign buyers who are open to multigenerational homeownership, as well as millennials who put more value on their social network than their personal space,” Blomquist told LawnStarter.

One group with a high propensity for multigenerational housing is Hispanics, and they’re the only demographic to defy declining national homeownership trends.

Hispanic millennials are apt to purchase homes for their parents over themselves.

Given a sizable amount of money, it’s assumed a young Hispanic individual would purchase a home for their parents rather than a home for themselves, according to Leo Pareja, a broker for Keller Williams in the Washington, D.C., metro. Moreover, 2015 marked the fifth consecutive year that Hispanic homeownership has been on the rise, with 245,000 new owner households entering the market during the year.

Another big factor is the pressure tight inventory continues to put on affordable housing, squeezing out many qualified buyers from a competitive market.

So if you can’t beat ’em, join ’em — in a house where everyone can be happy. 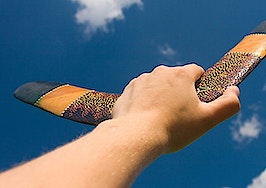 Boomerang buyers on the move?