Like much of the real estate tech industry, Matterport has virtual reality on the brain and the fire of an ever-evolving digital space to ignite motivation for expansion and progress. Today, the provider of 3-D virtual tours added some extra fuel to its funding tank with an infusion of strategic investments.

Like much of the real estate tech industry, Matterport has virtual reality on the brain and the fire of an ever-evolving digital space to ignite motivation for expansion and progress.

Today, the provider of 3-D virtual tours added some extra fuel to its funding tank with an infusion of strategic investments.

The money comes from an array of real estate and media firms, including:

.@Matterport has received an influx of strategic investments for expansion.

The terms of the investments were not disclosed. Linda Itskovitz, VP of Marketing at Matterport, said that although the company can’t comment on any specific investor involvement, “Matterport is expanding rapidly in many industries.”

She added in an emailed statement, “These investors offer us significant experience and relationships in some of our fastest-growing industry segments, such as commercial real estate, media and publishing, travel and hospitality, and more.

“The investment is to fund Matterport’s growth, and just as important are the strategic relationships that come about from having these additional investors.”

After its launch in 2014, Matterport has released a steady stream of updates to its technology and international footprint.

Regarding its global presence, the company added in the press release announcement: “Matterport has also seen significant growth in non-U.S. markets where the demand has grown entirely organically. This organic growth has resulted in a global customer base representing over 60 countries and multiple verticals.”

On the product front, Matterport rolled out social media integration and storytelling (August 2015), the ability to annotate 3D Spaces and describe home features with pop-up boxes (April 2016) and schematic black-and-white floor plan generation (April 2016) over the past year. The company recently surpassed 250,000 total 3D Spaces online and 54 million views on those renderings. 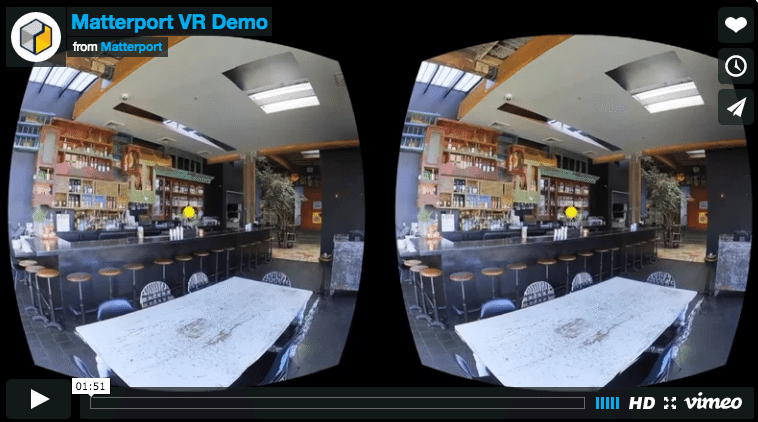 Though Matterport didn’t specify exactly how it plans to expand on VR, the announcement said the company will channel the investments into broadening its “disruptive VR and 3D immersive media solutions into new markets.”

So far, Matterport provides a beta virtual reality (VR) program that allows customers to convert their 3D Spaces for use on the Samsung Gear VR for $99, an offering released last year. Just last week the company made a first move toward more comprehensive VR services with Android’s Google Cardboard, an affordable VR viewing platform (actually made of cardboard), for visualizing Matterport Spaces.

“We’re excited to welcome strategic investors who believe in the power of 3D immersive media, VR and Matterport’s ability to transform industries,” said Bill Brown, CEO of Matterport, in a press release. “They bring a wealth of experience in residential and commercial real estate, travel and hospitality, vacation rentals, and media publishing, and they share our vision of giving people the freedom to experience any place at any time.”

Should we be on the lookout for any more Matterport acquisitions on the horizon?

That’s yet to be seen, though Itskovitz didn’t rule it out. “We are always on the lookout for cost-effective ways that will help us achieve our goals faster,” she said in an email.