Credit markets sat immobilized in August, waiting for Janet Yellen’s speech this morning at the annual Economic Policy Symposium in Jackson Hole, Wyoming. This conference of central bankers has been sponsored by the Kansas City Fed since 1978 — so very appropriate this morning because the K.C. Fed never does anything useful (for the last 25 years demanding large rate increases to fight imaginary inflation).

This conference of central bankers has been sponsored by the Kansas City Fed since 1978 — so very appropriate this morning because the K.C. Fed never does anything useful (for the last 25 years demanding large rate increases to fight imaginary inflation).

Jackson Hole is gorgeous, and it’s easy to imagine central bankers in pinstripes singing around the campfire — old, sad songs about wrecking economies.

The conference has no tradition of speeches announcing major policy change, and today was no exception. Yellen delivered one allegedly hawkish line — “…I believe the case for an increase in the federal funds rate has strengthened in recent months” — but did not suggest she intends to do anything about it.

Fedwatchers insist that she put September back in play. Not likely, not during this election. Unless some pressing need arises here in the U.S. — higher actual inflation and/or a surge in wages — the Fed will remain Hippocratic: “Neither will I administer a poison to anybody when asked to do so.” Many years later came “First, do no harm,” and the Fed chants that one, too. Primum non nocere.

The basic equation is unchanged: the outside world is a mess, and spillovers of U.S. policy can then easily result in negative spillbacks to the U.S. (“spillbacks” was actually used in Fed commentary earlier this year).

For mortgage rates to go lower we need something newly ugly over there. Patience. They’ll think of something.

Back to politics. This Presidential election is astounding in many ways, but at the top of the financial list nothing is more amazing than the Fed escaping the attention of the candidates.

Although the candidates have spared us, and the Fed will attempt invisibility until 11/9, others are trying to make trouble. As a people, a society, we must have some basis of common information. There are always people on fringes who prefer fairy tales or self-confirmation, but the rest of us even when we disagree about what to do we require and acknowledge common information.

But, like settled law, common information is boring. Modern media in its death spiral, starved of revenue, is desperate to attract eyeballs, and “ethical journalism” an oxymoron, everyone for sale.

But beyond media today our common information also depends on new-age think tanks, often extensions of traditional university scholarship. Or so they present themselves.

Brookings has been a respected one, slightly left of center, but NYT digging this month showed that large contributions begat content pleasing to the contributor. At least Brookings stayed bought.

Wednesday’s lead editorial in the WSJ was by Kevin Warsh, a Fed governor 2006 through 2011. He is now with Stanford’s Hoover Institution, a surprisingly right-side tank.

A standard fundraising tactic common to all tankists: toss red meat to potential donors by publishing political trash in serious journals. Warsh’s op-ed is a screed against the Fed’s policies, criticism with some foundation (like all good propaganda), but without one single proposal for what to do instead.

Apparently sensing a reservoir of eyeballs, or trying to get a fight going, the WSJ published as news last night, “Years of Fed Missteps Fueled Disillusion With the Economy and Washington.” In print this morning toned down to “Fed Stumbles Fueled Populism.”

Evidence for this inventive garbage: a single Gallup poll of confidence in government institutions showing the Fed dropping 15 points to 38 percent since 2003. The Center for Disease Control fell 16 points, and only one beat 50 percent (the FBI).

The Fed (Mr. Greenspan in person) blew it in the credit bubble, but saved our behinds since. As for slim growth and missed forecasts… the Fed has limits.

Today it is essential that all of us be suspicious of our sources. Hold in suspense and cross-check. 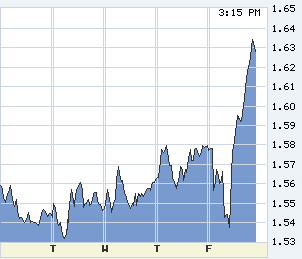 The smartest traders I know thought we would move higher anyway, Yellen or no Yellen — two months unable to sustain a break below 1.50 percent, nothing new and awful overseas, up a bit makes sense. 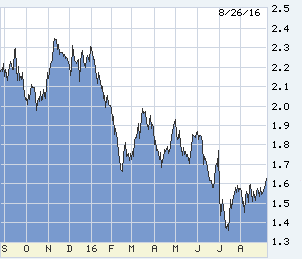 In full perspective, the 10-year one year back

In full perspective, the 10-year one year back, the chart suggesting a brisk move to 1.70 percent (mortgages pushing 3.75 percent), but no farther. 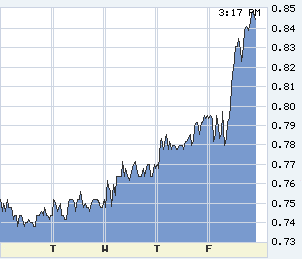 The 2-year T-note is the best Fed-predictor of all; here is the last week.

The 2-year T-note is the best Fed-predictor of all (NOT the Fed funds futures market). Here is the last week. Note the spike here, also hours after Yellen spoke. Maybe re-thinking, maybe background chatter around the campfire, but still not really going anywhere. The “spike” is just 0.06 percent — if September really were in play for another 0.25 percent hike, 2-Ts would show a far bigger jump than this. 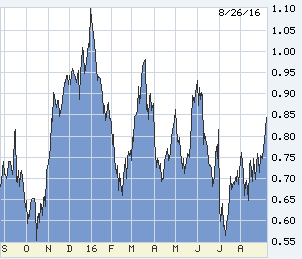