Forget Los Angeles or New York. To visit the website of independent Utah brokerage cityhomeCollective is to enter a world of design and architecture you never knew existed in Salt Lake City.

Forget Los Angeles or New York. To visit the website of independent Utah brokerage cityhomeCollective is to enter a world of design and architecture you never knew existed in Salt Lake City.

What began as a blog evolved into Derrick’s own brokerage seven years ago, as the site founder set out to tell his city’s story and later help others experience it in the most tangible way: by living there. 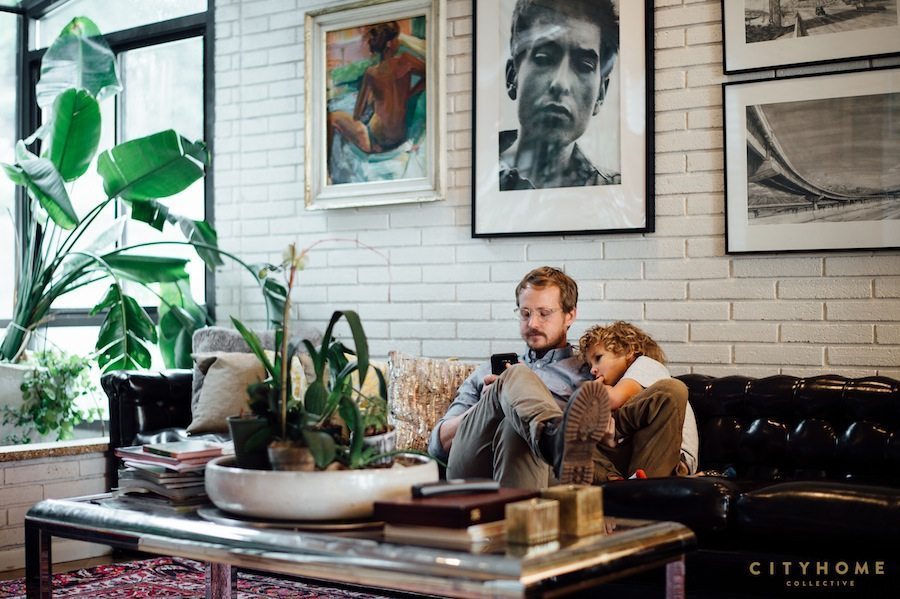 The successful design-driven firm, which earned $100 million in sales volume so far this year, takes a creative approach to real estate that, through connecting with the artistic community, goes beyond navigating a sale.

Featuring the mantra “love where you live,” a full-time site editor on staff, layers of design expertise and visual marketing on steroids, cityhomeCollective emerges as an industry rarity.

As summed up by one of cityhomeCollective’s agents, Mark Seely, on the company website: “We’ll sell your home, find you a new one, design it, decorate it, and throw you a party when you move in.”

From fixer-upper to agent to entrepreneur

Derrick, 37, used to nag his parents to go to open houses as a child.

He’s been in the professional real estate business for 12 years and started cityhomeCollective after four years with Keller Williams and one at Signature Realty.

Before that, the company founder began buying real estate at the age of 21 and had fixed up four properties by 24.

He currently lives in a historic apartment building downtown, a place that earned a spot on the cover of Utah Style & Design, while he designs and builds another home.

@THECityHome ‘We’ll throw you a party when you move in.’

Derrick explains what drove him to strike out on his own: “For me, the idea of creating a real estate brokerage that also focused on design came about simply due to my desire to make a career out of combining the things I love: real estate, design, architecture and amazing people.”

Though many creative souls might be drawn to the city lights more prominent in today’s box-office rom coms, Derrick can give you chapter and verse on why the high-elevation capital (known better for being the nation’s Mormon headquarters) has a strong heritage in the architecture realm.

Long story short: The incredible landscape surrounded by the Great Salt Lake and snowy Wasatch Range peaks has been attracting architects from Chicago and Los Angeles since before the 1950s.

During the brokerage’s setup stages, Derrick not only wanted to bring the good design ethos of his hometown to the fore, but he also wanted bring about change.

“My mission with creating this company was to reinvent the real estate industry,” he wrote in a blog post. “I wanted to recreate the real estate professional reputation as honest, ethical, community driven, interesting, creative, passionate individuals. This was not the case when I started, but change is actually happening,”

Design on the brain

As a member on the Salt Lake Modern board (a Utah Heritage Foundation committee) and the Dean’s Council for the University of Utah’s College of Architecture, Derrick set up a division at the brokerage that does staging, renovation, commercial and restaurant design.

Design had always been an interest for him, and it was something that became a value proposition as it poured out of him naturally.

“I couldn’t help the design advice; I just loved it and was obsessed with it,” he said.

Officially constructing the design division came from client demand. They started asking if he would redesign their homes post-sale, so he decided to formalize the arrangement.

“Showing houses to my clients, it became very natural to dream with them about what they could do with the potential of space. When marketing listings, it’s very easy for me to see the potential of a house,” said Derrick. 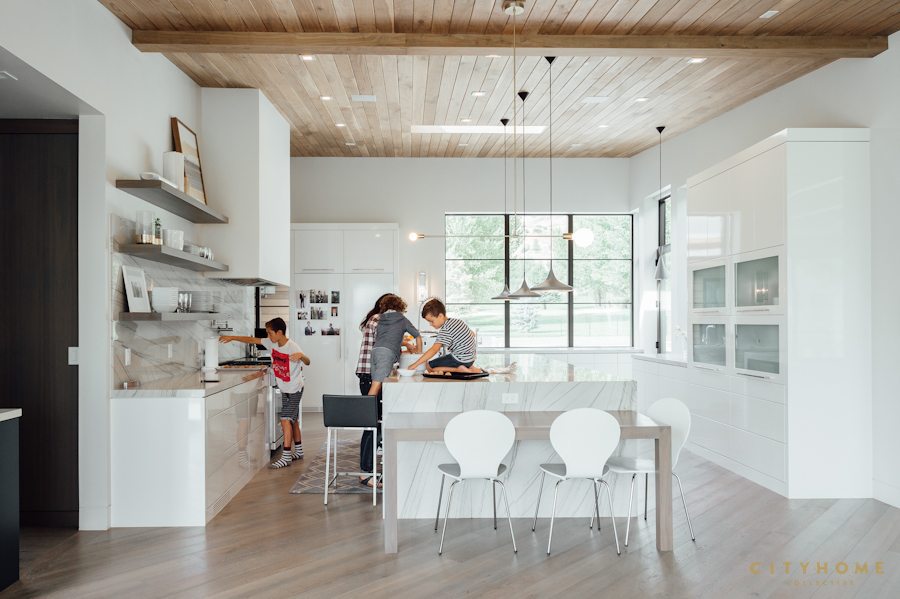 To make that potential come to life regularly, Derrick would need some help. The brokerage currently has 15 agents and a staff of 10, including the full-time editor, a part-time photographer, two full-time interior designers, two full-time design assistants, a design division manager and a marketing team.

Derrick attracts like-minded agents and artistic types to the company.

Website editor Amy Tibbals expresses the philosophy that binds them:

“Those that see real estate as something more than a potential commission come to cityhomeCollective,” she said. “We feel so strongly about our mantra — that space shapes life, that finding the perfect home is so essential to happiness and wholeness, that we attract those who feel the same.”

A blog, the voice of the city

Tibbals’ editor position has been a necessary investment for the website, which regularly communicates with the brokerage’s like-minded tribe.

While the company is active on Facebook and Instagram, the cityhomeCollective site is the team’s favorite form of engaging online.

Said Tibbals: “This is where we tout every last thing we believe in, from praiseworthy architecture to stellar interior design, as well as locals making a difference in Salt Lake City to local businesses that boost the cyclical nature of our local economy and, in return, need a boost from us.”

Derrick, who was raised Mormon, but left the church because he was gay, said the company blog is an inclusive conversation with the community.

“It’s important for me to speak honestly with my voice in the blog,” he said. “I don’t hide anything. It’s very accepting, and important that this extends to the LGBT community in Salt Lake City. I wanted to start a company that loved everyone, that doesn’t discriminate.”

Between five and 10 new stories run on the blog every week. Derrick says he gets notes back from friends in New York or London: “Oh my god, I’m moving to Salt Lake City. You can get that in Salt Lake City?”

That is always the point — trying to get them to move to Salt Lake City, said Derrick.

And this is not such a hard sell these days. The urban center has a California quality of life, yet the average house price is $280,000.

Forbes rated Salt Lake City the third best place in the U.S. to base yourself as a young entrepreneur in 2016.

The tech world has also recognized the city as a good location for skilled and ethical staff.

And don’t forget the film scene — cityhomeCollective sells homes in Park City, where the Sundance Film Festival is held every year.

Another key point of difference at the firm is its approach to photography for marketing listings.

The company spends between $500 and $1,000 per listing shoot. In marketing shots, clients are artfully photographed at home, going about their daily lives, cooking and entertaining — or just doing nothing.

Tibbals explained: “Readers and followers see the way these homes envelop the people inside.” 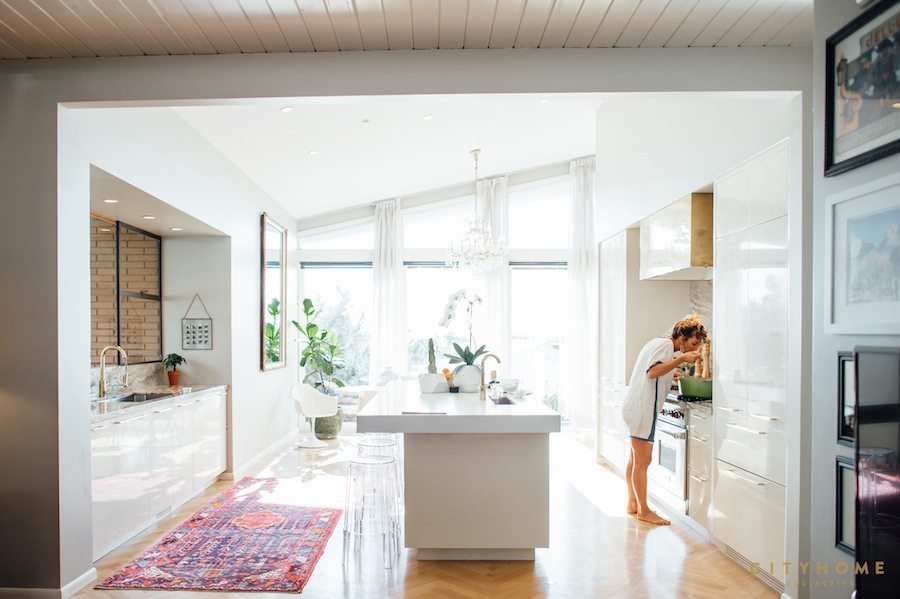 The brokerage doesn’t hire actors, but instead features actual clients and success stories.

Its marketing approach leads to interesting clients. “We attract individuals who are more progressive and liberal but also people who know we would highlight their homes in the way they want,” Derrick said.

On the buyer side, Derrick, who has sold more than $150 million of property in his career, said cityhomeCollective digs deep to understand what a person’s goals and dreams are.

When helping people find a home, he asks questions that are normally asked by a therapist, he says. He gets clients to consider anything in their life that they are currently not doing because they don’t have the space.

He gets them to think about what their life could be rather than what they expect to find.

“Everyone has the potential to create a home or space that is literally life-changing,” he said. “Rather than focusing on price or square footage, we want them to think about the things that really matter in a home.”

‘Everyone deserves a house’

Although a love of design is sometimes associated with expensive exclusivity, Derrick stresses his real estate business is about inclusivity.

His clients range from a 25-year-old couple buying their first house to people who designed their dream home and are selling it for the first time.

“We sell interesting property, whether it’s mid-century, historic homes that are noteworthy, to everything in between,” Derrick said. “We offer the same level of service for every one of our clients whether it’s a $200,000 condo or a $5 million property in a nicer area.”

Because he started young, the people who made up Derrick’s initial client base were often first-time homebuyers or college graduates.

“It’s always really important to stick with the belief that everybody deserves a home,” he said.

Having attracted a group of like-minded design aficionados, as you would expect, events are big at cityhomeCollective — and Gen Xers and millennials alike play an equal part in attending and putting them on.

The company just held its annual community party in September that attracts over 1,000 clients, neighbors and blog followers.

The firm brings in a DJ, food and beer through partnering with the local breweries and restaurants.

“It’s all free to the public and we get a crazy turnout every year,” said team member Lauren Bald. “It’s a lot of fun.” The event is followed by a fancier VIP party for clients only.

At these parties, every generation is represented, said Derrick. “That was the intent, that our people be as unique as our properties,” he said. “People come together who are in their 20s to their 80s; they come from Tokyo, Switzerland, Germany.”

The brokerage will also host events for nonprofits from the architecture and design community and regularly hosts evening movie showings featuring films set in an interesting home or architect documentaries.

The Salt Lake City market is a seasonal one with a big snow season dominating the year, a challenge to the local market.

But cityhomeCollective’s formula perseveres. In 2015, the firm closed 300 transactions, and it’s on track for 400 for this year. The firm beat last year’s sales bar of $91 million.

Will it claim an even bigger market footprint — in Salt Lake City or elsewhere — in the future?

Derrick, whose personal year to date is $12 million in sales, said he’s planning to grow the design division, while the company may expand to other cities, states and even become a global brand.

But the challenge is always staying close to the original vision, culture and integrity that got them this far.

As the company endures some growing pains, the key will be spreading its beliefs on an individual level, Derrick said.

“We have maintained the work-life balance as best we can, continued to be heavily involved in bettering our city and helped people work to find the space that is unequivocally theirs, but life is overwhelming,” he added.

“We’re still just doing our very best to practice what we preach every day.” 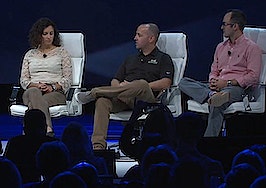 How to create sexy real estate websites that engage visitors 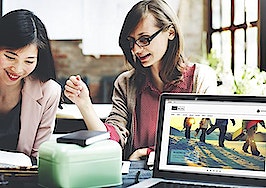 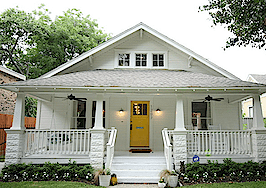 Houzz tour: from shocker to stunner in Houston 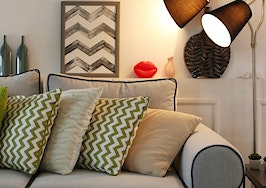