The economy is somewhere between OK and just fine. First quarter GDP was initially reported as weak, a 0.7 percent annualized gain, but a revision doubled it to 1.4 percent — below the Fed’s forecast, but a better second quarter will fix that. New data on personal income and spending are also cooking right along.

Last week, it was a tad more difficult than usual to thresh wheat from chaff. At the outset, anyway, stick with Clinton’s Law: “It’s the economy…”

The economy is somewhere between OK and just fine. First quarter GDP was initially reported as weak, a 0.7 percent annualized gain, but a revision doubled it to 1.4 percent — below the Fed’s forecast, but a better second quarter will fix that. New data on personal income and spending are also cooking right along.

The only flaws: NAR’s index of pending sales has fallen 1.7 percent year-over-year, and the Fed’s favorite measure of inflation is also under-performing at 1.4 percent. “Flaws” like this suppress the Fed’s intention to raise the cost of money, but rates nevertheless rose in this week’s only economic upset. 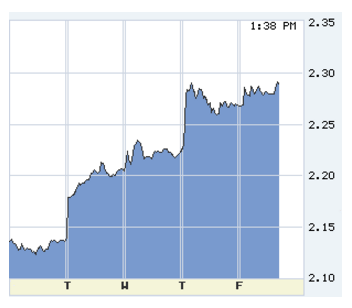 The US 10-year T-note. Draghi’s Tuesday effect clear — and later forcing some “longs” into selling:

Mario Draghi mumbled the possibility of tapering ECB (European Central Bank) bond-buying and bond yields jumped all over the world. Draghi, no doubt looking forward to retirement (October 2019) and reduced prospect that the next European recession will be named after him, attempted to un-mumble, but the damage was done.

German 10-year bonds almost doubled in yield, from 0.24 percent last Tuesday to 0.47 percent Thursday, tied with the 18-month high. The global bond rout ended the U.S.’s 10-year’s stair-step unwinding of the Trump Trade from its 2.60 percent top to Monday’s 2.12 percent low, back up to 2.28 percent Friday – and also concluded the mortgage-market attempt to cross below 4.00 percent. 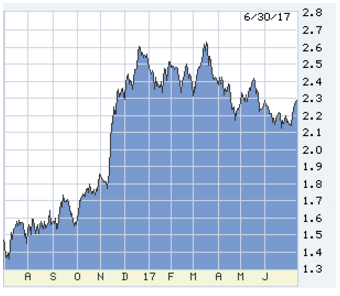 The 10-year in the last year. The decline trend is still in place, but needs economic weakness to go deeper.

The Fed’s rate-hike intentions are getting the usual heat, especially from the jackdaws who were certain the Fed was too low for too long and should have tightened five years ago but now object to hikes. Stick with the Fed’s own words: It is not trying to slow the economy, just to remove excess accommodation.

This Friday we’ll get the June employment report, and honest, non-jackdaw pressure will build on the Fed to abandon the rate of unemployment as a tool for policy decisions, its linkage to wages and inflation obviously broken.

Point of data: Colorado’s 2.3 percent is the lowest unemployment rate in the U.S., and our employers forecast pay increases for 2018 rising to — gasp — 3 percent. 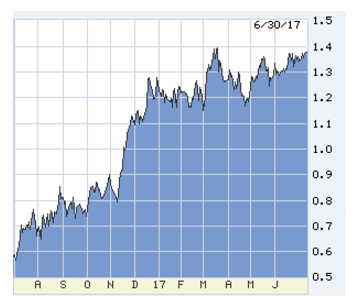 The 2-year T-note traders are continuing to build in the Fed’s next hike.

Newly hired workers pulling down the unemployment rate are obviously not getting high-wage jobs, nor boosting the wages of others. Still, eight years into a recovery, with interest rates within a short putt of all-time lows, what is preventing overall economic acceleration and especially acceleration in housing construction and sales?

Tops on my list: The ruinous cost of health care. Republicans should be forgiven some of their predicament. They ran too hard against Obamacare, a rubegoldberg if there ever were one, but misunderstood the beneficial expansion of Medicaid. Republicans are split among themselves, McConnell trying to stuff toothpaste back into a tube which is open at both ends: mollify the Freedom Caucus ultra-teapots, then lose moderates, and vice-versa. 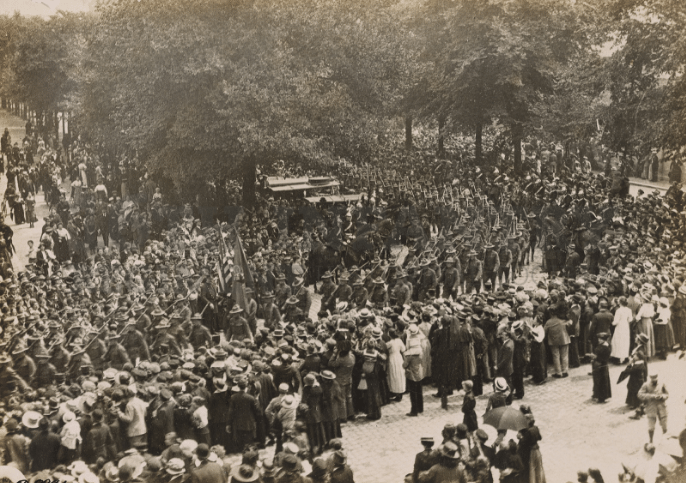 Cost is the problem. Throwing 22 million people out of coverage is not a solution. Nor is offering a choice between a fatal premium and a fatal deductible. The Democrats are just as much at fault, expecting infinitely more money and joining Republicans in absurd notions of “market discipline.” No peer nation has an open market in health care. Market discipline will not control costs on the day that Dad is on a gurney.

We need true cost-compression: price controls and rationalized delivery, and gradually to reduce the cost of U.S. health care by one-third as a percent of GDP — to the level everywhere else with the same results. We must, for the sake of our households and federal budget.

Wheat from chaff? Chaff: If we had a different Republican president, would the party’s legislative agenda be moving forward? Probably not. The whole shebang from health care to taxes is a collection of minority to fringe ideas. Markets are indifferent to Trump’s travails, event-price movements undetectable.

However, if you Google “25th amendment,” the no. 2 result is Trump. Upon a request by the vice president and a majority of the cabinet to remove a president “unable to discharge the duties of office,” the deed is done on a six-day time-track by a vote of two-thirds of both Houses. That possibility is more possible than a week ago, but even president Pence would not change markets. Only a restoration of functioning US politics will do that.

Then wheat — rich wheat. Take a moment to celebrate (with youngsters, please) the 100th anniversary of the first arrival of U.S. troops in Paris in 1917. France was exhausted, its brave army bled to mutiny, one male citizen in eight by then dead, wounded or crippled. At the ceremony beside the tomb of the Marquis de Lafayette on July 4th Pershing kissed Napoleon’s sword, and asked Lt. Colonel Stanton to say something appropriate in French.

“Lafayette, nous voila!” We are here to repay our debt of honor to you and to France.

A battalion of the 16th Infantry then marched through Paris, big American men. The crowds along the route — women, boys, and old men — were overcome with emotion.

Greatness. Sometimes nothing more than the courage to act the part. 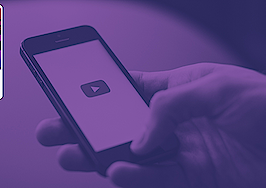 Keeping agents 'out of orange jumpsuits': 3 tips on blockchain
Back to top
Only 3 days left to register for Inman Connect Las Vegas before prices go up! Don't miss the premier event for real estate pros.Register Now ×
Limited Time Offer: Get 1 year of Inman Select for $199SUBSCRIBE×
Inmanpot
Log in
If you created your account with Google or Facebook
Don't have an account?
Create an Account
Forgot your password?
No Problem