While the housing market continues to deal with the inevitable strain of low inventory, the rental market is benefiting from a record year of new apartment construction that’s stabilizing rent growth and making would-be buyers think twice about transitioning into homeownership.

While the housing market continues to deal with the inevitable strain of low inventory, the rental market is benefiting from a record year of new apartment construction that is stabilizing rent growth and making would-be buyers think twice about transitioning into homeownership.

According to RentCafé, apartment completions are expected to exceed 345,000 — a 21 percent year-over-year increase from 2016, and the highest level of building since 1997. In key metros, the boom in construction has cooled the year-over-year rent growth rate to 1.5 percent, the lowest seen in three years.

Nationally, the average rent is expected to increase 3.9 percent, 1.9 percent lower than the year-over-year increases (5.8 percent) in home prices. 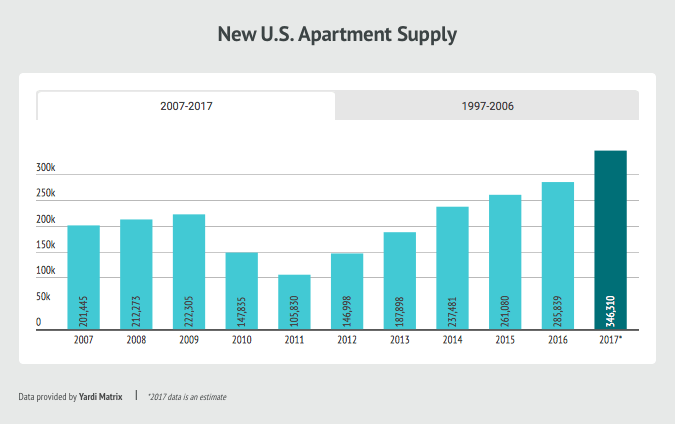 San Francisco and New York City are set to benefit the most from the boost in construction, giving renters a bit of reprieve from high monthly rents.

In 2016, developers built 6,200 new units in San Francisco, and another 5,400 are expected to be up and ready for tenants by year’s end. The increase in construction has slowed year-over-year rent growth to 0.5 percent, a 5.7 and 11.4 percentage point decrease from the growth seen in May of 2015 and 2016, respectively.

In New York City, developers built more than 17,000 units throughout 2016, and an additional 27,000 are expected to go up this year. This is the highest rate of construction for any major city in 2017. The majority of the new builds are in Manhattan (7,023) and Brooklyn (6,984); rental construction is much needed here as rentals are currently at 97.5 percent occupancy.

Things are looking up for renters

Cities across the South — such as Dallas, Houston and Nashville — are experiencing major growth as well, and RentCafé Senior Analyst Doug Ressler says the perks offered by apartment complexes are hard to turn down, especially when rent costs are leveling out.

“From an affordability standpoint, things are starting to look better for renters,” said Ressler. “Rent growth is slowing down, even in the country’s most expensive markets, and it doesn’t stop at that. With more units on the table, renters may be able to get some discounts and concessions on new leases, including one month of free rent, waived move-in fees and free gym memberships.”

Millennials have a reputation for being apartment dwellers as they begin their professional lives, but RentCafé says baby boomers are turning to rentals as they don’t require upkeep the way homes do, and they offer a lifestyle with “fewer financial strings attached.” This age group now make 30 percent of the renter demographic, an increase of 2 percent from 2014 to 2015 that’s expected to grow.

“Lifestyle changes, a housing-stock shortage and high homes prices have led to more people than ever – of all ages – choosing to rent an apartment rather than buy a home,” he said.

An additional study by RealPage shows that in Q2 2017, there was a demand for 175,645 apartments across the U.S., something that speaks to the attractiveness and relative ease of finding and moving into an apartment in the face of a quick-selling, uber-competitive housing market.

According to the National Association of Realtors HOME Survey, there are two ways to turn renters into owners:

“More new homes for sale would increase the pool of listings homeowners would have to choose from if they decided to sell their home,” said NAR Chief Economist Lawrence Yun. “Many right now are staying put because they will likely sell their home a lot quicker than it will take to find another home to buy because of tight supply.”

“More new construction at entry-level prices and homeowners listing their home for sale would also increase the number of listings and alleviate the supply shortages and weakening affordability that is hurting renters,” he added.

“Minimal choices and rising home prices in many parts of the country are impacting renters trying to convert to homeownership.” 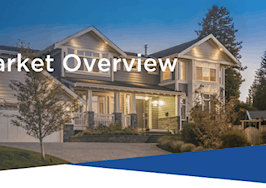 Zillow: Lack of for-sale inventory due in part by increased single-family rentals 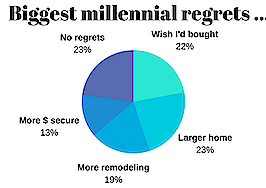