Real estate agents of the wealthy Los Angeles Bel-Air neighborhood were watching homes and blocks of streets they know well go up in flames from their living room TVs this morning.

What’s being called the “Skirball” fire for its location near the Skirball Cultural Center is covering 150 acres in Los Angeles–a separate blaze from the “Thomas” fire that broke out near Ventura earlier this week and has burned over 65,000 acres so far and destroyed homes across the price spectrum, The New York Times reported.

The Skirball fire situation is rapidly evolving. According to the Los Angeles Times, authorities have ordered the evacuation of all homes between Mulholland Drive on the north, Sunset Boulevard on the south, Roscomare Road on the east and the 405 Freeway on the west. Earlier in the morning officials ordered evacuations along Casiano Road, Moraga Drive and Linda Flora Drive.

Not the typical morning commute… pic.twitter.com/kJIOQeqsIK

A viral tweet from a local investment professional showed hills of flame as far as the eye could see, a scene more overwhelming and fearsome than any disaster film out of nearby Hollywood.

Firefighters were said to be hiking up the hill from the Getty Center exit, with flames raging near the renowned art museum, next to the northbound 405 freeway, to survey the extent of the fires, which are reportedly zero percent contained.

Mauricio Umansky, CEO of luxury real estate brokerage The Agency, was monitoring the situation from the safety of his home in Encino, a neighborhood in the San Fernando Valley, where he and his family recently moved.

Their luxury home in Bel-Air, which they had just put on the market three days ago, was “in the middle of it all,” he said.

Our beloved Getty Museum is surrounded. Pray for California. The winds are fierce. Impossible to fight. @RobinBrenizer pic.twitter.com/2T9mywxNqs

Umansky, who has opened his home to one family and said another two were on their way, said the street most affected this morning was south Casiano Road in Bel-Air.

“A couple of families from my daughter’s school live in that road,” he said. “It looks like it is getting pummeled.”

Sotheby’s International Realty agent Jeremiah Eden, based in Brentwood (located five miles west of Bel-Air), expressed grave concerns about a beautiful Gerard Colcord $5 million home he is selling at 1160 Casiano Road with agent Kaitlyn Benson, who has a personal connection with the property: it is her childhood home.

The house, featured recently in Los Angeles Magazine, was in “immediate danger” he said. The owner had been ordered to evacuate at 5 a.m. this morning with homes in the 1300 address range reportedly on fire.

All of L.A. is being affected by the fires, said Eden, who lives in Malibu. “Right now there is no threat here but everywhere you go now, there are embers in the air; it’s very difficult to breathe, and it looks like the end of the world.”

Umansky said the areas of Moraga Drive and Linda Flora Drive, known for their pricey homes, were at risk. Rupert Murdoch has a home in Moraga Vineyards, and local media reported that his property appeared to be on fire as well:

BREAKING Fire has flared up on Rupert Murdoch’s property in Los Angeles. Helicopters are dropping water among the tycoon’s vineyards. pic.twitter.com/QYqi9YHmRa

The wind and the fires are expected to continue whipping up at least until the end of the day on Thursday, said Umansky.

Karen Misraje, a partner and branch manager with Partners’ Trust, now part of Pacific Union International, and president of the Beverly Hills/Greater Los Angeles Association of Realtors, said firefighters would be informed by the 1961 fire in Bel-Air.

“This is a very critical situation,” she said. “The Bel-Air fire took out a lot of homes, and it’s in the same area as back then.”

If the fire crosses the 405 freeway, it will hit one of the highest priced residential areas of Brentwood, she added.

Misraje, who lives in the hills herself off Mulholland Drive, was staying put and telling her members and any clients to listen to authorities, stay in their homes if their area was not being evacuated to keep the roads free, and to stay inside to avoid the contaminated air.

Most people living in the hills of Los Angeles knew what to do, she said, but it was an especially trying time for people new to the area.

As homes are destroyed or damaged in the area, there will likely be an uptick in lease and rental demand, said Umansky, though the rental vacancy rate in Bel-Air and Brentwood area is very low. 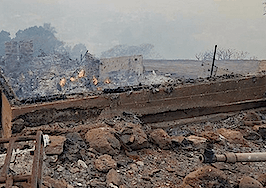 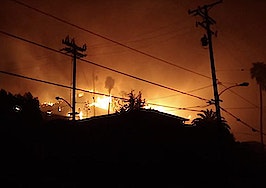