Real estate firms large and small are presented with the unique challenge of creating a sense of unity and pride among their agents who aren’t even employees, but independent contractors with a lot more freedom. Enter the idea of company culture, the focus of Inman’s latest Special Report, exploring what real estate professionals value most in their work environment and how leaders can foster a culture that promotes retention, productivity, happiness and a positive image.

Real estate firms large and small are presented with the unique challenge of creating a sense of unity and pride among their agents who aren’t even employees, but independent contractors with a lot more freedom.

Enter the idea of company culture, the focus of Inman’s latest Essential Guide, exploring what real estate professionals value most in their work environment and how leaders can foster a culture that promotes retention, productivity, happiness and a positive image.

Culture manifests in many different forms: flat or hierarchical, innovative or stodgy, collaborative or siloed. It’s created through a shared set of values, everyday interactions between coworkers and management, gestures both large and small, technological offerings and support, communication style, training opportunities and key decisions. A strong culture, which may be less obvious to the naked eye than a bad one, is something that an organization must continually work to shape, improve and live out.

There was no doubt among respondents to Inman’s survey about the significance of culture; nearly three-quarters said they believe culture is “very important” to a company’s financial success.

When asked if they thought their company had its own culture, an overwhelming number of respondents — 87 percent — said yes. The majority considered their culture to be strong already but said that an improved culture would further bolster their desire to stay where they are.

“Whether a person is defined by the IRS as a self-employed contractor or an employee, it is unimportant when it comes to culture,” said a Louisiana agent. “Culture is the glue that binds associated professionals together and helps maintain a sense of inclusion, support and camaraderie.”

Yet culture will be constantly challenged in a dynamic business environment. In the digital age, broker-owners and managers have to work harder to bring their agents together for opportunities to connect, such as networking events or social gatherings. Additionally, as many brokerages around the country experience fast and exciting growth, leadership must preserve a sense of culture amid the changes and momentum.

Red flags such as agents rarely coming into the office, poor communication in a remote setting, a few negative associates or teams in the mix or a managing broker who is never available may be signs of trouble that, left unaddressed, can have a profound effect on the health of your business. And while a national brand may have an admirable set of values and mission statement, if the local office isn’t “walking the walk,” its managers need to step up or risk creating a disjointed environment that leads to costly turnover.

“When people are happy, they are more productive, and there is less turnover,” said Anthony Hitt, CEO of Engel & Völkers Americas, the global luxury real estate franchise, in an interview with Inman. “Turnover costs money and takes away from efficiencies when you have to retrain and rebuild. With a strong culture of positive, productive individuals, you attract similar talent. If people aren’t happy, that not only affects them, but the people around them and can certainly impact the bottom line.”

Positive, agent-first, tech-focused: The picture of a modern brokerage

Real estate pros overwhelmingly expressed praise for their own company’s culture, with nearly 77 percent describing their workplace culture as “strong” or “very strong.” There was no clear consensus on who had the culture edge between franchisors or independent firms — 18 percent said indie and 6 said franchisor — but over half believe the strength of a culture is dependent on the specific company.

Respondents cited easy access to managers, a relaxed yet professional environment, a family feel and transparency as aspects that made their culture stronger. They appreciated their companies’ “forward-thinking” mindset, commitment to keeping up with the times and focus on technology training. Eighty percent said they were content with their current commission split, with the majority of agents at 70/30, or at an office where splits vary among agents.

Close to 60 percent said they were “very happy” at their company, with 24 percent describing themselves as “happy,” and 12 percent as “neutral.” Just a small sliver — 5 percent — reported feeling “unhappy” or “very unhappy” at their place of work. Nearly three-quarters said that culture contributed to their happiness at work “a lot.”

“People thrive within cultures in which they feel safe to express themselves, are encouraged to take the next steps in their careers and one that fosters collaboration,” said Hitt of Engel & Völkers Americas. “We are all in this together, and there’s a lot to learn from our peers.”

According to the survey, the majority of brokerages seem to be on the right track, with 68 percent of respondents describing their company culture as “positive,” 57 percent as “agent-first,” 50 percent as “technology-focused” and 47 percent as “innovative.”

The “little things” at work played a big role in many respondents’ level of satisfaction. As one agent based in Georgia expressed: “From the random thank-you notes on your desk to the invites to out of work events, there is definitely a joy around my current office compared to the graveyard feelings in offices of yesteryear.”

Respondents also felt strongly about their companies giving back to the community. A number of Keller Williams agents highlighted their pride in the company’s KW Cares charity arm, for instance.

Diversity in age, gender and ethnic backgrounds was another important element of culture to a number of respondents, with 55 percent describing their workplace as “very diverse” (that dropped to 27 percent when it came to respondents describing the diversity of company leadership). Still 72 percent felt their company valued diversity and was striving for a diverse workforce.

“Our diverse age group ranging from 28 to 82 feels like a family with agents across the age gap,” said a broker-owner from Washington state. “We help each other and celebrate each other’s successes.”

What contributes to culture in a real estate office?

We asked respondents to share the tangible benefits their company provides that may contribute to culture. The most commonly cited were the option to work remotely (88 percent), a bricks-and-mortar office space (87 percent) and flexible hours (76 percent) — indicating that giving agents the freedom to work in different settings at varying hours is the norm in real estate.

At the same time respondents indicated that many real estate offices are highly social and collaborative, with all-hands meetings (63 percent), parties for staff unrelated to business (53 percent), a Facebook group for employees (53 percent) and team-building activities in the workplace (53 percent) cited as the top activities/offerings that influence their culture.

Moreover as more agents work remotely, we asked how companies were helping their agents continue to network and get to know each other. Respondents mentioned a wide range of events being run by their brokerages, inside and outside the office, including group coaching, weekly training sessions, continuing education classes, yoga and field trips, among others.

“Every brokerage can have technology, lead generation and education, but it is how they package all those things together in its mission that can make the difference between companies,” advised a Florida broker-owner.

Technology has made it possible to connect associates in a remote setting; as an example, cloud-based brokerage eXp Realty has an online campus for training and recently started leveraging Workplace by Facebook as a communication tool for its more than 6,500 agents across the country.

“We now have hundreds of (Workplace by Facebook) groups spontaneously built by agents and brokers from eXp on wellness, lead generation, working with buyers and sellers, corporate, watercooler,” said Glenn Sanford, founder of eXp Realty and CEO of eXp World Holdings. “That plus our virtual world, means it is a very palpable culture.”

Support and training on the job

In-office training and support are also critical to a company’s culture. The most popular types of support companies are providing to real estate pros include technology (87 percent), training in contracts (80 percent), transaction management support (72 percent) and training in procedures of your market (70 percent). A little over half said their office had safety training.

“We do training every two weeks where we also open up with questions that are outside of the work environment, such as: ‘What was your favorite date you ever went on? If you could own any building, which one would it be?’” shared a a Re/Max executive manager in Seattle. “It helps people learn stuff about each other and find commonalities.”

Safety training or support often comes in form of classes at the firm, self-defense training and a clear policy of best practices. Another popular effort being made by brokerages was bringing in law enforcement experts to talk to their office about safety on a regular basis and making a manager available to agents for any concerns or questions.

The survey indicated that the heightened awareness and conversation surrounding sexual assault and harassment in the workplace is leading a number of companies to take a closer look at their policies. While nearly 96 percent of respondents said they did not worry about sexual harassment in their workplace, 4 percent did. Over 37 percent of respondents said their company had a procedure in place for reporting instances of misconduct, while nearly 50 percent were not sure and 13 percent did not.

Company procedure often entails reporting the issue to a third party or talking to management, said those in the survey. A number of respondents — particularly those with women managers — said their office was one of “zero tolerance” in this area.

A constant work in progress

Generally, culture should be well-defined and clearly expressed by leadership both internally and to the outside world; it requires constant attention, with regular reviews and updates. Management must lead by example and suit their actions to their words and values. “We need caring, engaged leadership, not lip service,” commented a Montana broker.

Respondents were adverse to a culture that felt “overwhelming” or was tainted by drama, the prioritization of quantity over quality, elitism, a hierarchical structure or management that was viewed as secretive. While inaccessible managing brokers were reported as a problem, so were “helicopter brokers” who were overly involved.

Moreover, “culture needs to be explained at hiring, not after,” said a broker in Southern California. “I see that misstep as an issue more often than not. It ruins the atmosphere and attitude of all involved.”

Hitt of Engel & Völkers Americas understands the importance of this, and thinks it’s wise for leaders to slow down and spend time describing their culture to prospective agents and brokers to ensure they are a good fit early on.

Finally as businesses expand, merge, acquire and grow, blending different cultures can prove thorny but not impossible. “We recently combined four separate offices, that each had their own culture, into one,” shared a Nebraska broker. ”We are working to build an environment that fosters an attitude of helping one another, building each other up, focuses on life work balance and open communication.” 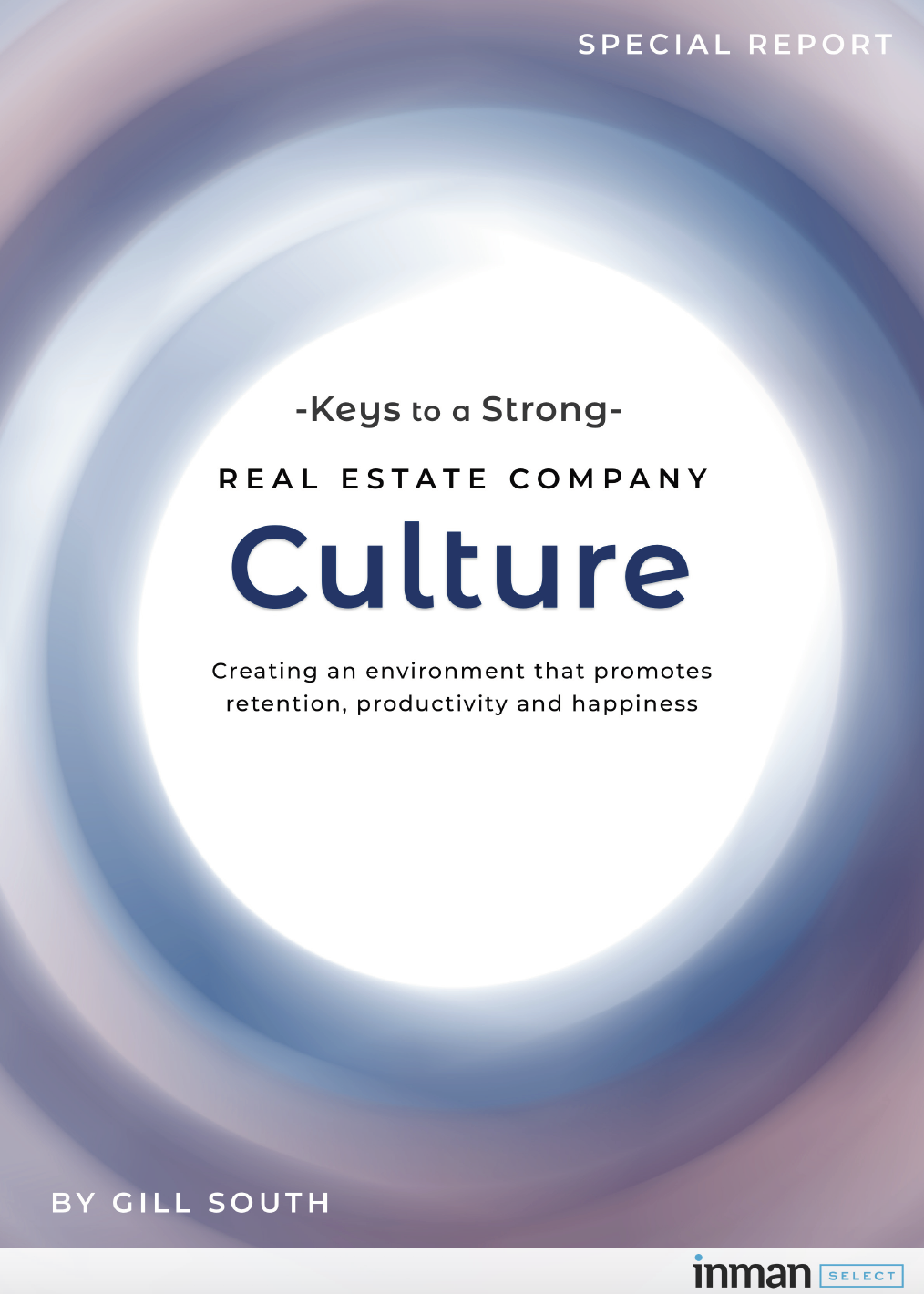 Special report: the keys to a strong company culture
by Gill South | Jan 31