Knock is making good on its expansion promises and getting ready for an IPO in 2020. The iBuyer expanded to its second city and reserved its NYSE ticker.

Knock is making good on its expansion promises — and preparing for a 2020 initial public offering.

The Atlanta-based iBuyer expanded into Charlotte this month. Throughout the rest of 2019, the startup has said, it plans to move into nine more cities: Raleigh, Los Angeles, San Diego, Phoenix, Chicago, Miami, Orlando, Tampa and Denver.

At the same time, Knock earned an early vote of confidence from the New York Stock Exchange. The exchange reserved the ticker “KNOC” for the startup, for if and when it’s eventually traded on the exchange floor. Knock announced that it plans to claim it — aka go public — by 2020. That two-year gap means Knock got its ticker much further in advance than most companies (it usually happens a few months ahead rather than years). Knock is also announcing its own IPO plans pretty early.

“We’re announcing early because we have an affinity for the New York Stock Exchange,” Knock CEO Sean Black said on air with Cheddar earlier this month. “The New York Stock Exchange was nice enough to reserve our symbol, KNOC, for us today, so why not put it out there? We have pretty aggressive plans to get nationwide pretty fast, so this seems like a really good goal.”

Knock’s expansion to more cities is part of the reason it’s planning to go public.

“It’s about getting across the country as quickly as possible. We’re in Atlanta today and 10 more markets in the next year and those require a lot of capital. Being an independent public company makes a lot of sense,” Black said.

Last month, Knock debuted its home trade-in model, which lets sellers sell their homes to the iBuyer and through the startup also trade up to their next home. Knock launched in 2016 and has since raised $32.5 million. 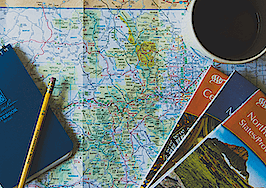 Leadership Lens: It's easier to be the agent of change