The portion of buyers willing to bid on their future home sight-unseen just keeps rising.

Thirty-five percent of people who bought a home last year made an offer on a home at some point during their search without seeing the house in person first, according to a study commissioned by Redfin. Thirty-three percent said the same last May and 19 percent before that in June 2016.

“With no end to the housing shortage in view and more millennials entering the housing market, the trend toward sight-unseen bids is likely to grow in 2018,” Redfin said in a press release. 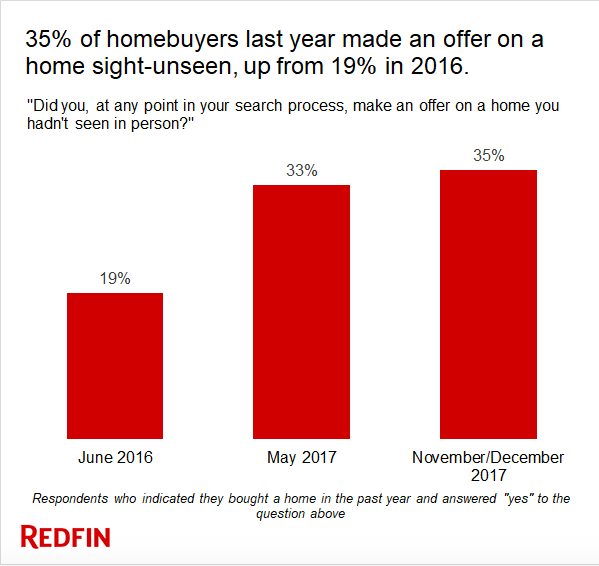 Buyers’ willingness to make an offer without walking through a house, in some cases, speaks to the availability of 3-D tours and other technology that gives buyers a better picture of a house from afar, such as virtual reality. Redfin, in its announcement, emphasized the use of its own Redfin 3-D Walkthrough tool and regular, iPhone FaceTime.

In terms of non-investment purchases, millennials are more likely to make an offer on a house relying only on digital tools. Forty-five percent of millennial respondents to this survey told Redfin they had made an offer on a home without seeing it in person. Only 6 percent of baby boomers said the same.

Buyers who bid on a home without seeing it don’t necessarily close the transaction without stopping by in person, however. And it’s possible the survey may exaggerate the tendency of the average U.S. homebuyer to make offers sight-unseen, as most metro areas the survey looked at were among the most competitive markets in the country.

The change from respondents last May is small, but noteworthy. This round of survey results showed a small but steady uptick from seven months earlier in buyers’ willingness to make the first step toward a new home relying on technology, yet Redfin also noted the importance of real estate agents in facilitating a sight-unseen bid.

“This family had only a few weeks to find a home and they did not want to live on-base or rent,” said Angela Hunter, a Redfin agent in Omaha, in a statement. “Because the wife was eight months pregnant at the time, they needed a move-in ready home within 20 minutes of the base. While conducting video tours with them, I was very careful to explain things that they would not be able to experience virtually, like the sounds, smells and textures. I pointed out flaws that are hard to detect through video so that nothing would be a surprise to them once they visited in person. It’s not the easiest way to shop for a home, but together we found the perfect match.” 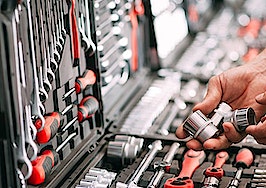 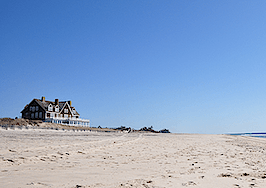 Everything to know about Out East, Zillow's new Hamptons brand