The Obamas may have to look elsewhere if they want to go on vacation this summer — the Martha’s Vineyard home where the former first family spent many a summer holiday has been sold.

‘The Chilmark House,’ which also became known as the  Obama’s ‘Summer White House,’ was sold in early June for $18 million, realtor.com reports. The property, which Barack Obama and his family rented during his presidency and after, boasts 7,000 square feet, six bedrooms, an infinity pool overlooking the Atlantic Ocean and a dock.

The Obamas rented the sprawling Rick Sundberg-designed mansion seven out of the eight summers of his presidency. The property, previously owned by David Schulte, features access to a private beach and is shrouded by trees.

The mansion itself, estimated at $2.5 million in 2015, soared in value once it became associated with the Obama family. Upon putting the property up for sale, the owners included a photo of the former president and Michelle Obama in marketing and promotional materials while playing up the fact that the “presidential palace” was for sale.

Schulte, a partner at the Chilmark Firm, a corporate restructuring firm based out of Chicago, supported Obama for president early on, even if the Yale Law School graduate didn’t immediately approve of the candidate’s Harvard roots.

“I said I’m really glad to meet you, but I’m not going to support you,” Schulte told Chicago Magazine in 2013, recalling the first of his many conversations with the former president. “For one thing, you went to the wrong school … And [Obama] listened. Then he started talking and in 20 minutes he had me eating out of the palm of his hand. … The next day I was writing a $2,000 check … And after that he asked me to be on his finance committee.”

The identity of the buyer was not disclosed. 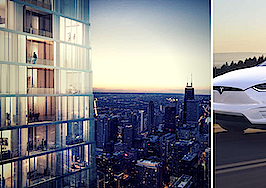