To produce Command, Keller Williams worked with 27,000 people — many of them agents — and had engineers go through other CRMs to see what worked well. The goal was to create something that was customizable and that could be configured to the needs of agents.

After years of development and much hype, Keller Williams has officially launched its new agent tech platform, Command, which functions like a customer relationship management product (CRM), but which company founder and newly reinstated CEO Gary Keller argued on Saturday is actually larger, smarter, and more comprehensive than any CRM to date.

The system, which Keller Williams leaders say is powered by its internal investments in artificial intelligence software, was formally unveiled during the company’s annual Family Reunion convention taking place this weekend in New Orleans.

Command is available now for free for all Keller Williams associates worldwide, designed to act as a kind of one-stop shop that streamlines agents’ jobs, allowing them to automate tasks, create customized marketing campaigns, and manage databases and contacts all in one place, among other things.

The system was first previewed in 2018, but up until now only 20,000 Keller Williams agents were able to access it as part of a beta testing group. 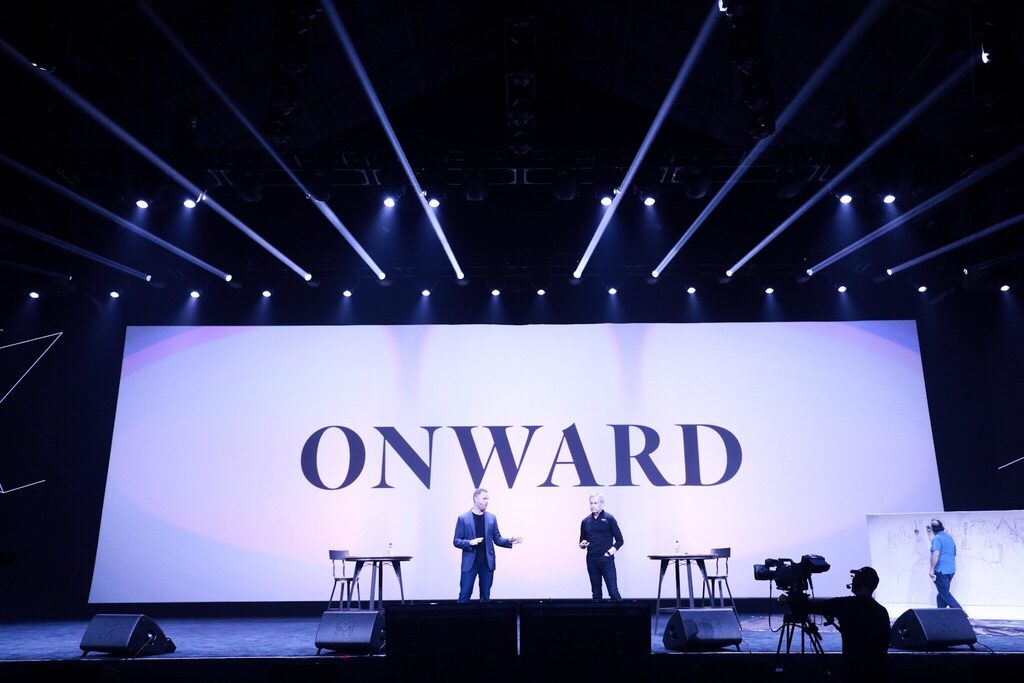 During Saturday’s Family Reunion, Keller Williams President Josh Team explained that an agent using Command can input a contact, which will then prompt the system to generate a customized landing page for that person.

Team used a hypothetical client, dubbed “Sarah,” to show how Command aggregated neighborhood insights, agent branding, and other information into a custom page that is delivered via an emailed link. 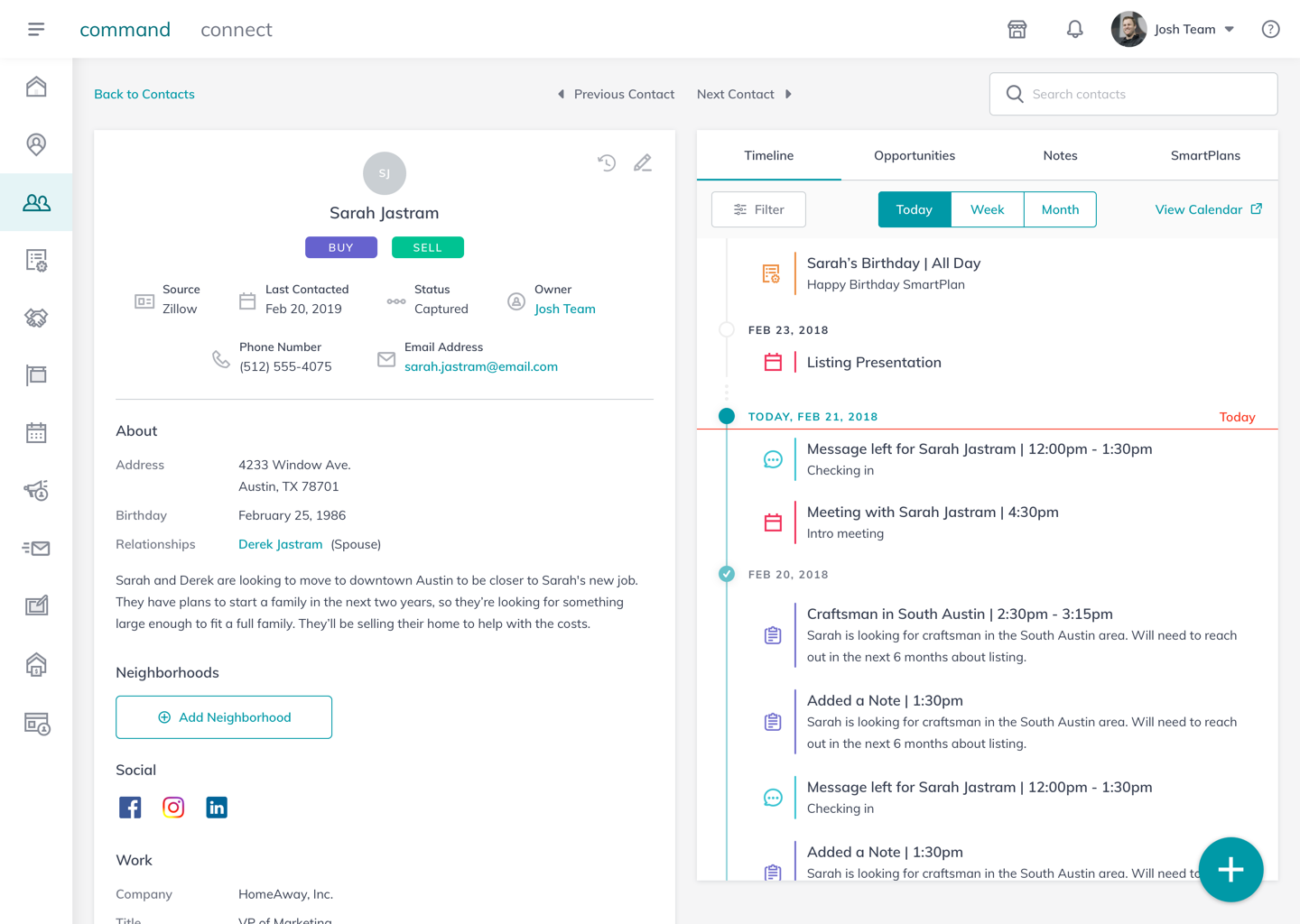 Command also generates data based on consumers’ interactions with the customized websites, and agents can use that data to guide their clients through the buying or selling process.

“Command’s going to show me when she visited her website,” Team said.

Team went on to say that this kind of customized landing page, with neighborhood-specific data, is vastly more effective than typical agent websites — which he said 97 percent of the time don’t actually accomplish what they’re supposed to.

“We saw a 400% increase in engagement and conversion for agents,” Team added. 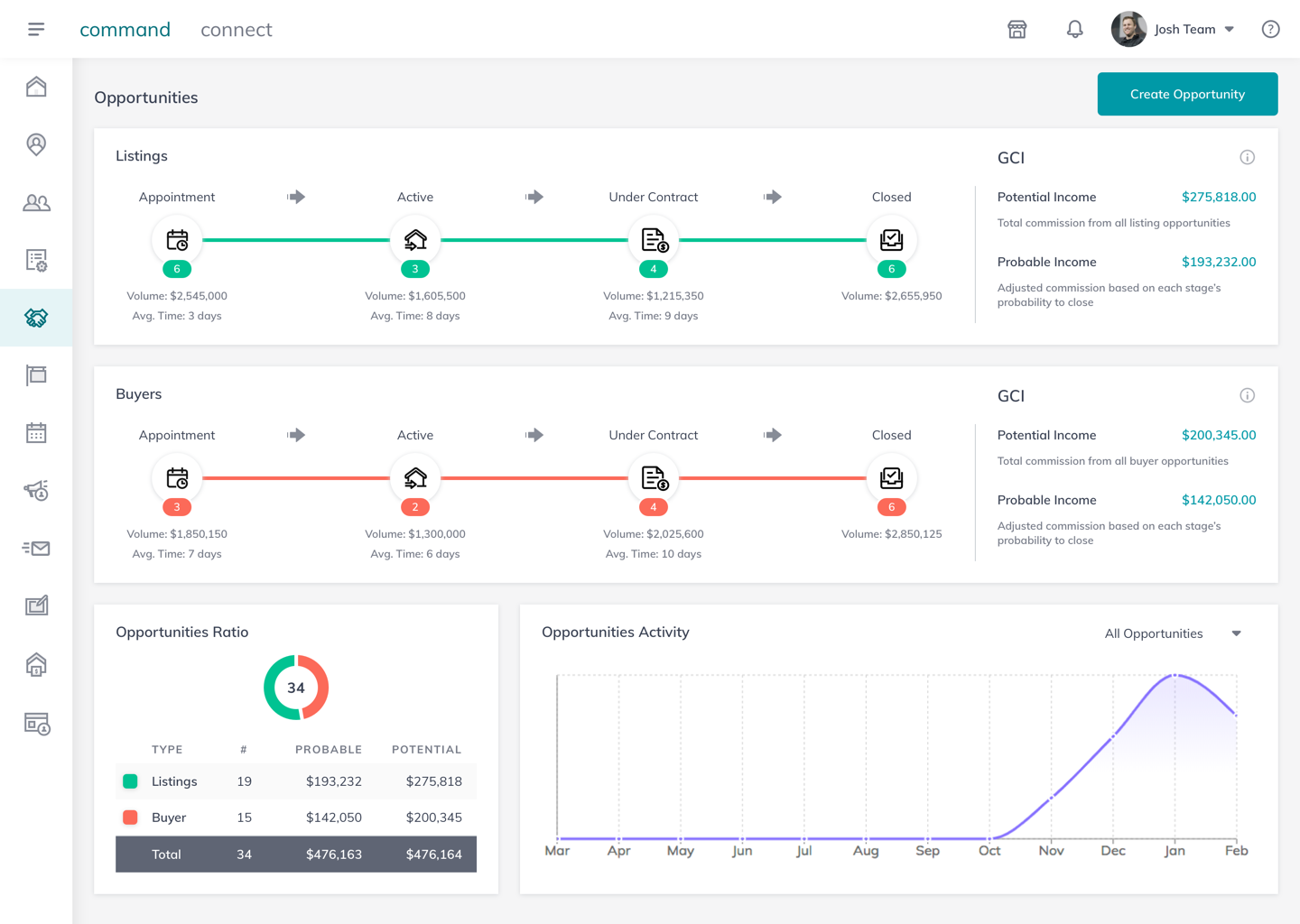 A screenshot highlights some of the features Command brings together. Credit: Keller Williams

Command can also integrate with other third-party platforms such as Boomtown or Brivity.

Other features include a chat tool that is designed to enable collaboration between agents, groups that connect agents to each other, and referral management tools. Agents can additionally use Command to set up both digital and print marketing campaigns.

Team said that in total, Command integrates “with over 150 different systems.”

Speaking alongside Team Saturday, CEO Gary Keller said that KW agents collectively spent $1 billion on technology in 2018. But the goal of Command — which is free to Keller Williams agents — is to “take that billion dollars to as low as zero as we can.”

“Our premise here is we’re never going to charge you another penny,” he added. 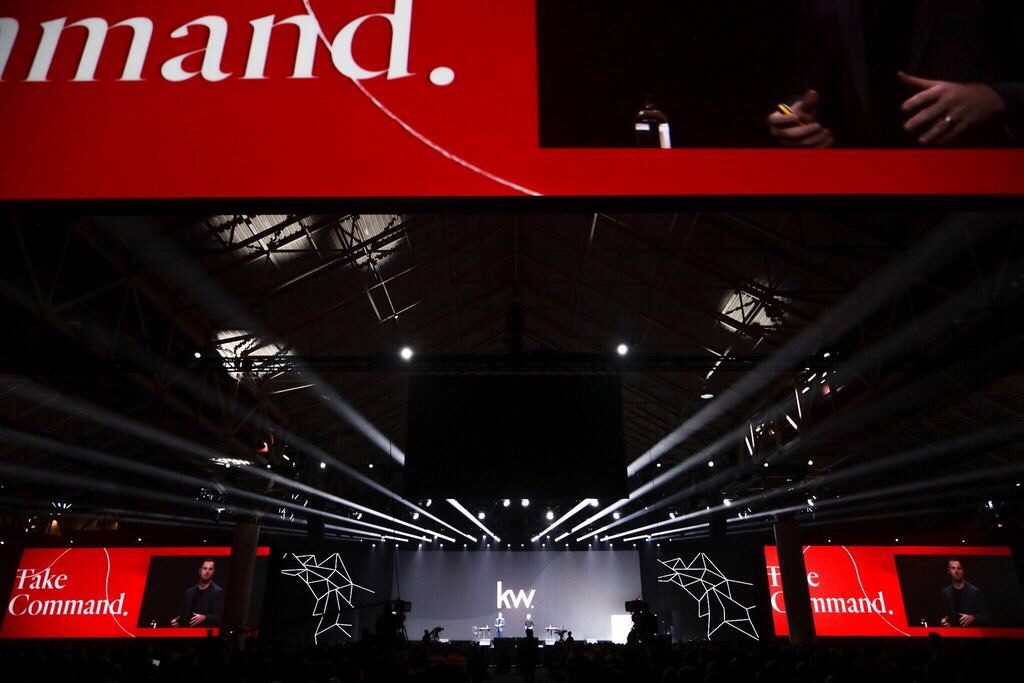 Keller also said that no one else in the real estate industry has created anything equivalent to Command, which isn’t so much as a conventional CRM as it is a broader platform that draws in a variety of Keller Williams technology.

“It’s not a CRM we just don’t know what else to call it,” Keller explained. “It’s a set of applications on top of a platform where all of the data is connected and artificial intelligence is running it.” 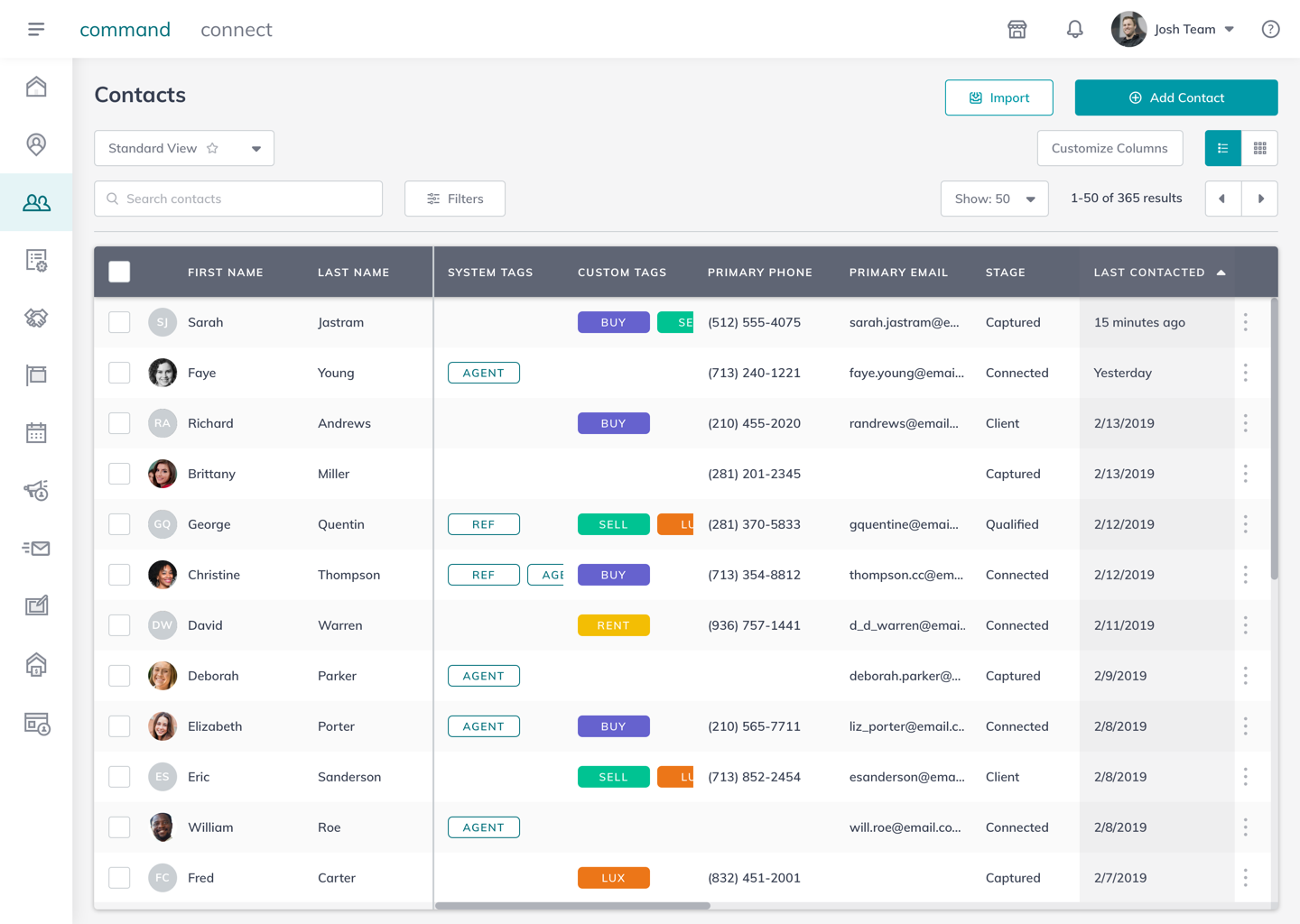 Both Keller and Team characterized Command as the culmination of years worth of technological development at their company.

That process included building what Keller called an “innovation platform” in 2017, and working on artificial intelligence in last year. As the company crossed into 2019, it was trying to bring those technologies together in a way that was simple, smart, and cost effective.

“In 2019 we’re now ready to begin rolling out all of the technology that we have built,” Keller said.

To produce Command, Keller Williams worked with 27,000 people — many of them agents — and had engineers go through other CRMs to see what worked well. The goal was to create something that was customizable, and which could be configured according to the needs of agents.

“We believe the technology should learn how you do business,” Team told the crowd of Keller Williams agents, “and not the other way around.”

Keller Williams is expected to unveil a new customer-facing mobile-first digital experience later this year to counter portal giants like Zillow and Realtor.com, as well as digital brokerage Redfin, and it is battling with other rivals such as RE/MAX, which is also pursuing the development of its own in-house technology platform for agents.

Update: This post was updated after publication with the number of agents who involved in the Command beta test group. 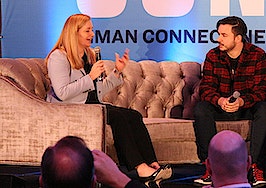 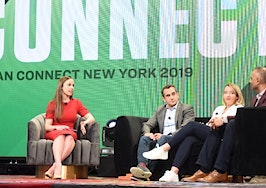 Agents and artificial intelligence are not enemies 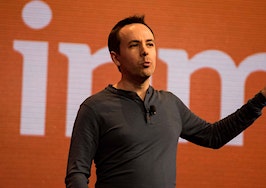 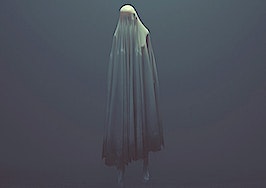