In a screenshot obtained by Al.com, Schaid offered his services as a listing agent to anyone upset by the election results. 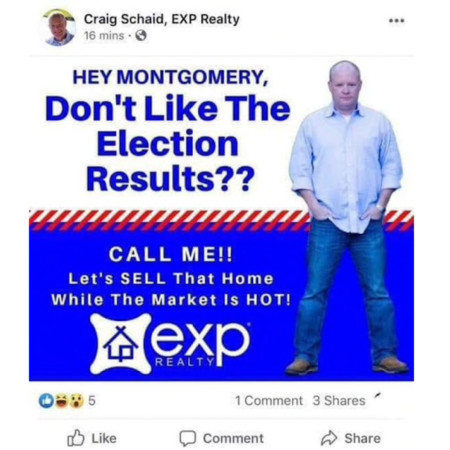 “Hey Montgomery, Don’t Like The Election Results? Call me! Let’s sell that home while the market is hot!” read the advertisement. The screenshot shows the post received one comment, three shares, and five reactions, which included a ‘thumbs up,’ a ‘laugh,’ and a ‘wow.’

Schaid’s ad was reported to eXp Realty, who fired the managing broker immediately.

“We reviewed the situation and terminated the agent. He is no longer an agent with eXp,” eXp Vice President of Marketing and Communications Cynthia Nowak said in an interview with the Montgomery Advertiser.

“In addition, we are discussing how we advocate for diversity and inclusion and will educate all staff and agents on these matters.”

In addition to losing his position at eXp, the Montgomery Association of Realtors asked Schaid to resign from his treasury position.

“As of today, we asked for his resignation and we received it today,” association CEO Brad Owen told the Advertiser.

In an emailed statement to Inman, Nowak explained Schaid’s dismissal won’t affect eXp’s operations in Montgomery since he was not a team leader.

“Mr. Schaid was not a team leader,” Nowak said. “Managing brokers at eXp work collaboratively with designated managing brokers on the administration of eXp Realty’s brokerage operations in their state.”

“In addition, there is no interruption for any members of our Alabama offices,” she concluded.

Schaid’s ad came on the heels of an historic election for Montgomery, which for nearly a century enforced Jim Crow laws that segregated and subjugated African-Americans living throughout the South.

“It’s a signal throughout this country about what type of community we are right now – not what we were, but what we are right now and what we want to be going forward,” Mayor-elect Reed said after defeating local television station owner David Woods by nearly 17,000 votes. 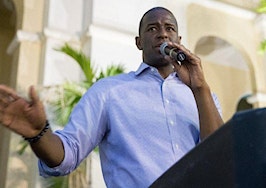 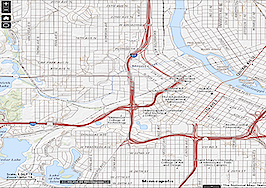 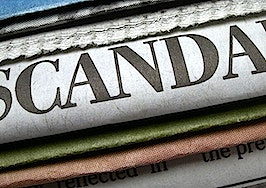 What to do when bad behavior threatens your brand