The Consumer Financial Protection Bureau has asked an independent oversight group to investigate racial remarks made 14 years ago by its top enforcement director, the Wall Street Journal reports.

Mick Mulvaney, the acting director of the CFPB, sent the request to the inspector general’s office for the Federal Reserve following the resurfacing of blog posts written by Eric Blankenstein, a source told the Wall Street Journal. The CFPB is an independent agency located inside of and funded by the Federal Reserve.

In September, Blankenstein, a high-ranking policy director with the CFPB responsible for overseeing fair lending practices, came under fire for 2004 blog posts in which he argues that most hate crime reports are hoaxes while repeatedly using the N-word to prove his point. Housing advocacy groups and experts within the agency have since called for the Trump appointee’s resignation.

As a high-ranking policy director for the Consumer Financial Protection Bureau, Blankenstein oversees supervision, enforcement and fair lending practices at the government organization. Last month, the Washington Post uncovered a 2004 blog post co-authored by Blankenstein, then a student at the University of Virginia, in which he grapples with a proposal by the school to heighten penalties for acts of racial intolerance.

“Hate-crime hoaxes are about three times as prevalent as actual hate crimes,” the post from 14 years ago reads. “(And I hate that I actually dignified their existence by quoting a statistic that recognizes them).”

Elsewhere on the blog, “Two Guys Chatting,” Blankenstein questioned whether use of the N-word was inherently racist.

“Fine….let’s say they called him n—–,” Blankenstein wrote in a back-and-forth argument over the University of Virginia proposal. “Would that make them racists, or just a–holes looking for the most convenient way to get under his skin?” 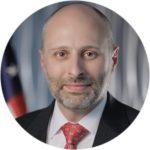 Few details emerged about the scope of the investigation and Mulvaney told a town hall in Louisiana on Thursday that the Consumer Financial Protection Bureau would be “handling that internally” — which, in this case, meant referring it to the Federal Reserve.

As a government official, Blankenstein earns more than $250,000 a year to investigate discrimination by banks and financial companies.

Although Blankenstein has apologized for his blog post, he also said he has no intention of leaving the job.

“Do I regret some of the things I wrote when I was 25 . . . Absolutely,” Blankenstein, wrote, according to The Washington Post. “The tone and framing of my statements reflected poor judgment.”