Markets have left for Thanksgiving earlier than usual. The 10-year T-note in the past week moved down from to 1.77 percent from 1.83 percent, not enough to move mortgages from the cusp of 4 percent. The two-year T-note, ultra-sensitive to Fed action has traded near 1.6 percent since early October.

There are hints in this motionless performance both from the Fed and the European Central Bank.

The top of the Fed’s overnight cost of money is now 1.75 percent. The market signal: Both the two-year and 10-year Treasury notes are trading at or under the Fed’s cost of money.

Why would investors accept long-term returns the same as parking money in super-flexible cash?

Two reasons: First, the outside world is afraid of itself and has been buying U.S. Treasuries for safety and because U.S. yields are high — even Italy pays a half-percent less than our Treasury for 10 years. Second, for long-term rates to be the same as cash — that’s a forecast that cash will not be paying so much for long, a forecast that the Fed’s next move will be to cut.

Ever since the Fed’s communication error one year ago right now, its rapid retreat to “patient,” a “mid-course correction” of one cut that became three — all of that time the Fed has been chasing the bond market down, not leading. The disturbing “yield-curve  inversion” of spring and summer has been fixed by the Fed cutting the cost of money fast enough to get under long Treasuries.

None of this is the Fed’s fault. It attempted to “normalize” the cost of money but had no way to know where normal lies without trying. It fixed communications instantly and has been repeatedly blind-sided by a trade war waged clumsily by both sides.

One more Fed signal: The minutes of the October meeting, as the previous one, open with a two-page discussion of what to do if the Fed has to return to zero percent, but zero does not revive the economy. That continuing discussion inside the Fed is not academic; it is laying plans that are likely to be necessary.

ECB President Christine Lagarde noted this week that the rate of growth in world trade in the past year has halved. Europe is the leading indicator for the world because it is more trade-dependent than the U.S., and it will answer to the key question: Will trade and manufacturing weakness spread to the service sector and wider economy? China, of course, is the real leading indicator.

What is the level of concern at the Fed and ECB? They are prepared to shout “fire!” when necessary to galvanize action by other engines of government, but in this case, there is no one at whom to shout. Nobody home anywhere.

The U.S. federal government is AWOL for several reasons, and the only government in Europe that matters has always gotten poor grades for “playing well with others.”

Germany must spend and borrow, or the others will sink again. But policy makers in and near the ECB are rejecting Lagarde’s latest plan for stimulus and renewed quantitate easing (QE).

All of this will take time to unfold, but the basic forces are untouched by public action: IT, compression of prices and wages, trade friction, and the aging of populations are impervious to short-term remedies.

The greatest threat to the global economy is trade friction with China and reciprocal demonization of peoples who don’t understand each other.

For this Thanksgiving, I give thanks this week to China for its restraint in Hong Kong. The university campus there could easily have become a new Tiananmen Square massacre, but was not, despite the protestors’ provocations.

The Hong Kong resistance to Communist Party control lies on the bright line of cultural difference: China has always been about imperial authority and top-down control of the populace.

In the West, we celebrate and protect the individual. The application of muscle to move that bright line one way or the other will not work. Get the temperature down, suppress righteousness, and talk about the divide and its points of friction.

And in America, there’s a “political divide” that is wider than politics. To one side of the country, impeaching President Trump for the Kyiv Kaper resembles sending Al Capone to Alcatraz for tax evasion.

To the other side, President Trump is one of us, to be protected from the others, and in turn is the Excalibur, the sword protecting his own. Each wing is so far from what used to be, the mainstream of political culture that neither can see the water. Each side with its own legal system, economics and basic ideas of right and wrong.

It is pointless to expect to change the mind of the other by evidence or argument, no matter how sensible. Nor by anger, insult or shunning. We are too far apart. So, drop all of that and explore what it is about the other side that is so upsetting and threatening. Some is inevitable, but some friction is accidental, and it can be repaired by avoiding tender spots or just a shift in tone of voice.

The U.S. 10-year T-note in the past three years. To have hopes for a new decline, or even stay where we are, the market must soon break the ascending tops and bottoms since the September-October bottoms close to all-time lows: 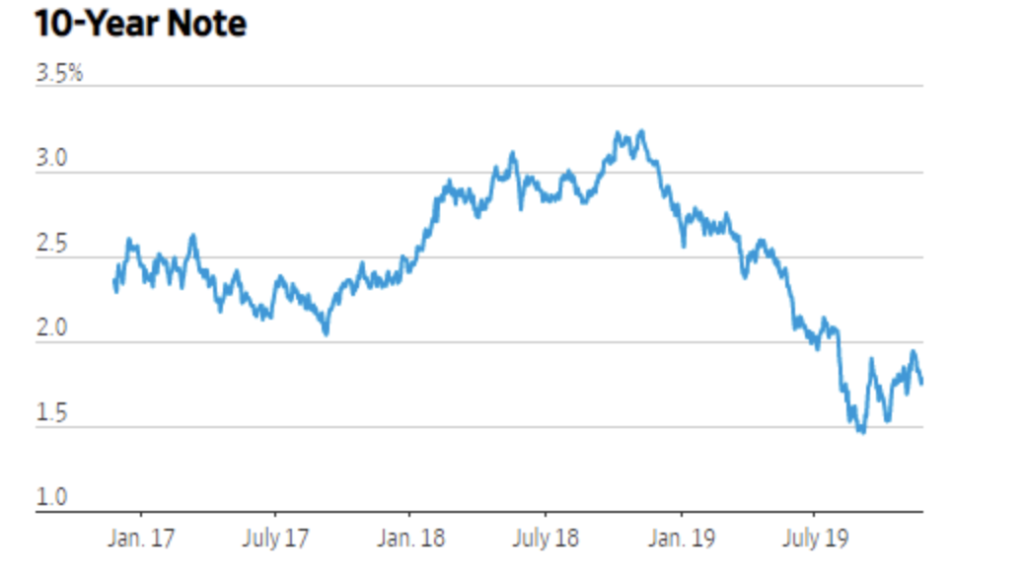 The Atlanta Fed GDP tracker last updated a week ago and will not again until after next week’s holiday. Its deep downshift since October is a big deal: 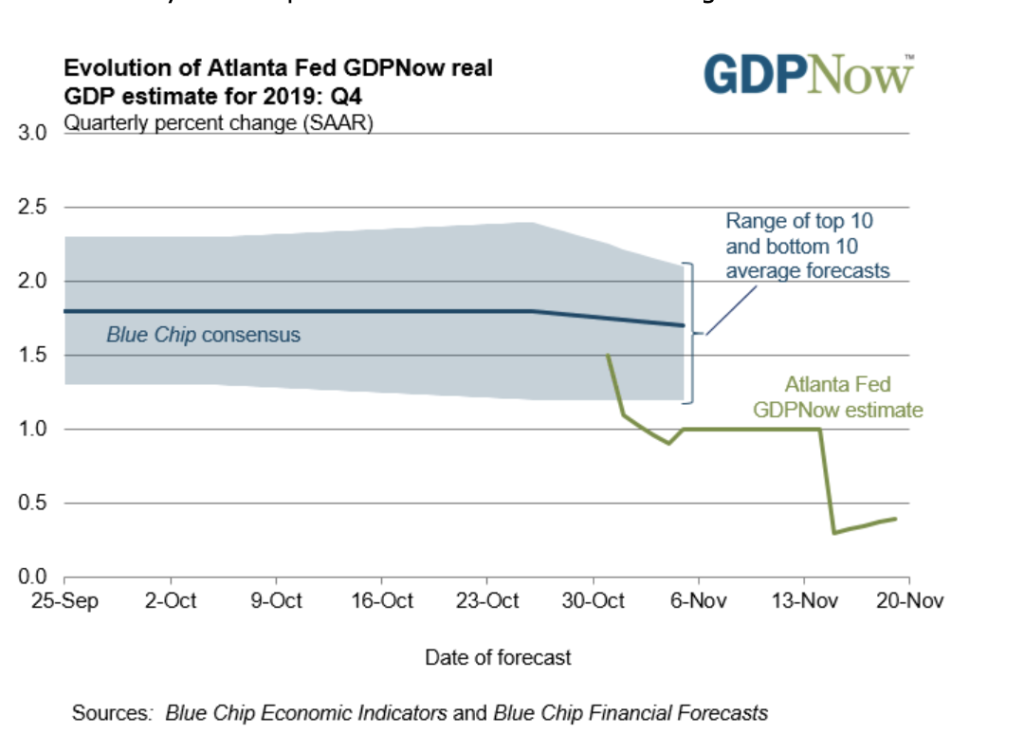 The ECRI has the opposite picture, a sudden improvement in its forecast. As much as I respect the ECRI, I suspect it is distorted by Fed easing and the reversal of the yield curve inversion: 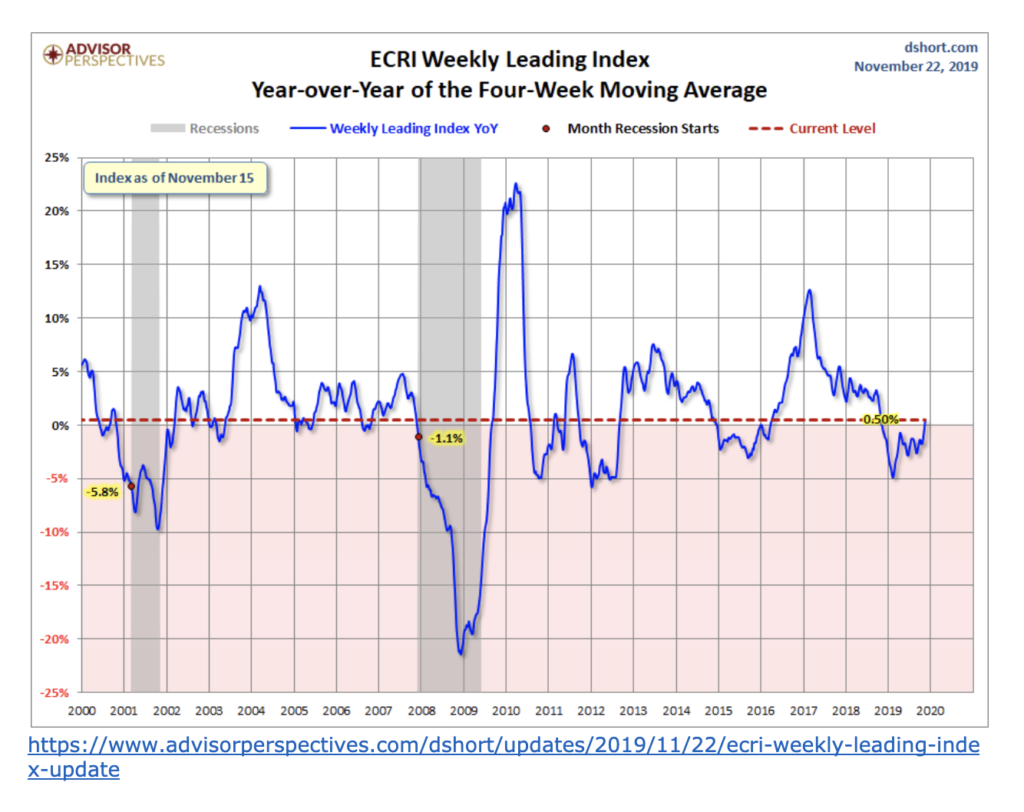