Normal Decembers are often void of substantial news, and markets stay steady. This December is packed with news, but markets remain unperturbed. That begs the question — what really matters?

Normal Decembers are often void of substantial news, and markets stay steady. This December is packed with news, but markets remain unperturbed. That begs the question — what really matters?

The Fed concluded its eighth meeting of 2018 on Wednesday. The post-meeting statement, economic and interest rate forecast, and press conference featured a masterful performance by Chairman Jerome Powell. The Fed’s ideal position is invisibility behind economic conditions so benign that the Fed needs only to say so and do nothing.

So it was on Wednesday, when Powell’s colleagues agreed that nothing will change next year. Of the five governors and twelve presidents of regional Feds voting, 13 said that the Fed would not change the cost of money in 2020, and the other four predicted one .25 percent hike. We know who those four are: Federal Reserve Bank Presidents and CEOs Esther George of Kansas City, Patrick T. Harker of Philadelphia, Loretta J. Mester of Cleveland and Eric S. Rosengren of Boston.

That’s a warm and fuzzy forecast for the holidays, but “no change” is the least-likely 2020. Other parts of the Fed forecast are also improbable, in particular that the “longer run” setting for the cost of money will be 2.50 percent, exactly the Fed’s rate one year ago and cut three times since. The world in the longer run is not likely to be an inflationary place.

Markets have correctly interpreted The Invisible Man as steady but leaning way over to one side: Zero chance of a hike, and if any action, down. The best evidence is that the 10-year T-note today is at 1.82 percent with no spread to the overnight cost of money at 1.75 percent. Markets buy the 10-year with no spread to overnight only if expecting overnight to drop.

Powell was precise. “In order to move rates up, I would want to see inflation that’s persistent and that’s significant …” He sees the current Fed setting as “modestly accommodative,” which means hoping for and tolerant of faster growth. Asked about the semi-obsolete Phillips Curve and tight labor markets, are there still more people on the sidelines who could join the labor force, he answered: “Yes.”

At the end of the press conference, Powell almost tipped his hand, but escaped before reporters could pursue. When pressed again about tight jobs, Powell was happy that wage growth has risen from 2 percent to 3.0-3.5 percent, saying the job market is  “healthy” and “strong” but not hot. The hand-tipping precipice: “To call it hot you’d want to see heat. You’d want to see, you know, higher wages.” Time had expired, so no one asked, what level of wage growth would you consider inflationary, requiring Fed hiking to intercept? He likely would have dodged anyway, but if there is one thing to watch in 2020, it’s wages, the leading indicator for inflation, if any.

Then — be very careful here — here’s a list of things that are alarming to many, but which don’t seem to be impacting the market.

The first step to take in evaluating these news items is to acknowledge a divide in the U.S. beyond partisan. Partisans argue about policy, and grudgingly compromise. Today’s divide, the greater Tea Party on one side, Progressives on the other is a bilateral secession from the center not seen since 1860, two alternate value systems that cannot even find a common vocabulary, let alone compromise.

No long-run economic issue is more important than the costs we will impose on ourselves to decarbonize, but we’re drowning in conflicting alarm and distrust, rather than in  rising sea levels.

Then there’s the trade war with China. The whole world needs for China and Germany to knock off their predatory behavior. China cheats, and Germany is obsessed with surpluses. The resolution is available by mobilizing the whole world to apply quiet but relentless pressure. Instead we, including the Fed, spent all of 2019 trying to adjust to damage from bilateral one-on-one grandstanding. Markets are reassured by today’s non-deal retreat from more tariffs. With a little luck the whole thing will stay a non-deal and only news junkies need to pay attention.

Impeachment? Same. An irresolvable national divide has reduced impeachment to boredom. The House proceedings this week were unwatchable. Those of us annoyed or enraged by the president’s personal conduct might instead consider how little substance is involved and try shunning, and offering attractive alternatives instead of overheating.

The best for last. U.S. media have covered Brexit and U.K. elections through the lens of U.S. bias. Left-side media have demonized Brexit and the U.K.’s Prime Minister Boris Johnson, just as they do the U.S. right-wing. Right-side press here have taken the opposite position out of habit.

Too bad. The U.K. is a good story which should encourage every one of us. The U.K. has been as divided as we are through several elections. At last a damned good politician has forced the issue, and his opponents have proven much more unattractive than he and his party. Johnson is no Trump, and despite Tory baggage (see Conservative House of Commons Leader Jacob Rees-Mogg) and Ireland, the dog-wagging tail, yesterday the Tories obliterated Labor — not the people or their feelings, but seats in Parliament and Labor leadership, which has already resigned. The divide still exists, but government will move on.

This is Democracy and law at work. It’s messy. Now Johnson must deliver, or a wiser Labor will soon give him the same treatment.

We forget here that we have the privilege of exercising our democratic rights. Hong Kong would give anything to be secure in democratic misbehavior. Consider their predicament, while sorting through what’s important and what’s not.

The 10-year T-note in just the last week showing lurches pre- and post-Fed, pre- and post-trade, and at the end suppressed by lousy retail sales in November. 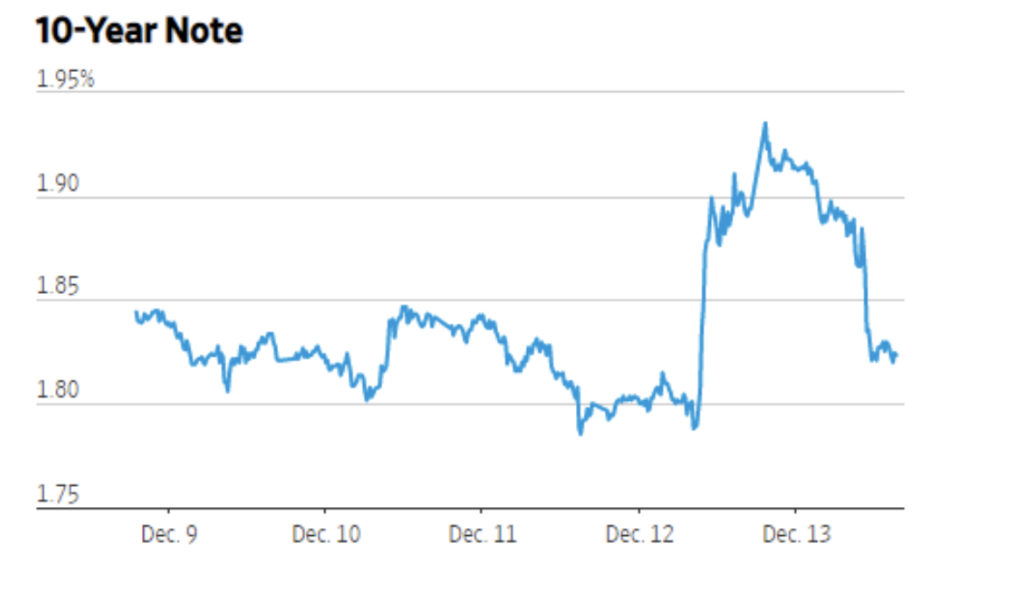 The Fed’s “damned little dots,” the forecast location of the Fed funds rate at the end of each year ahead. Powell claimed that each dot was cast privately, no pressure for consensus. I would never doubt such an honest man, but the 2020 consensus does not look accidental: 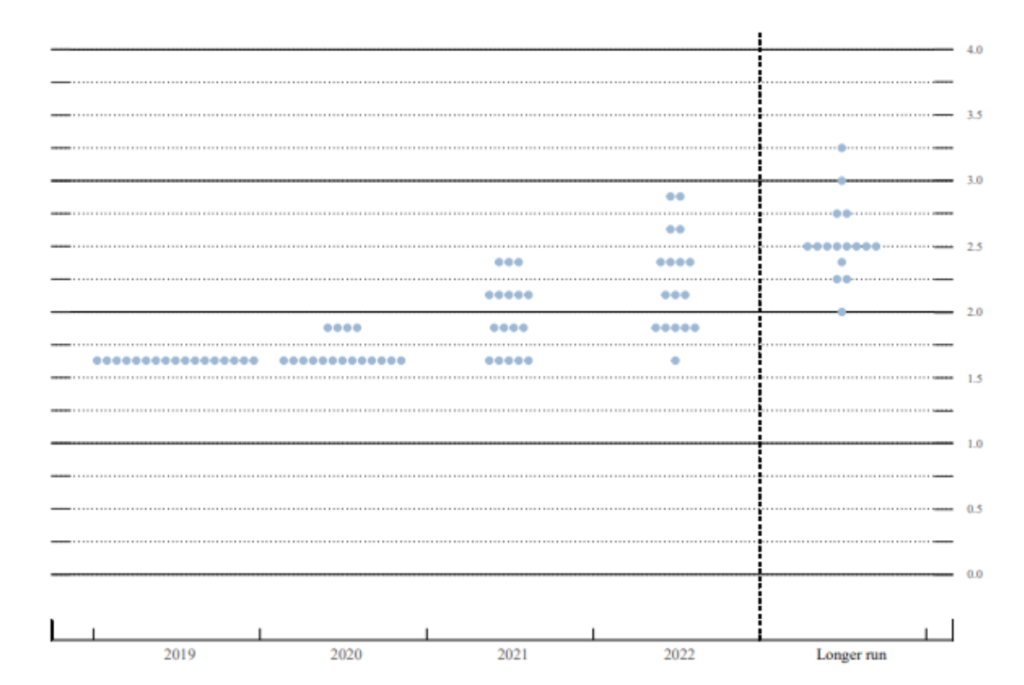 The Atlanta Fed is sticking with its 2.0 percent fourth quarter, but the New York Fed’s similar engine has fallen to 0.7 percent. Like Powell, steady but dovish: 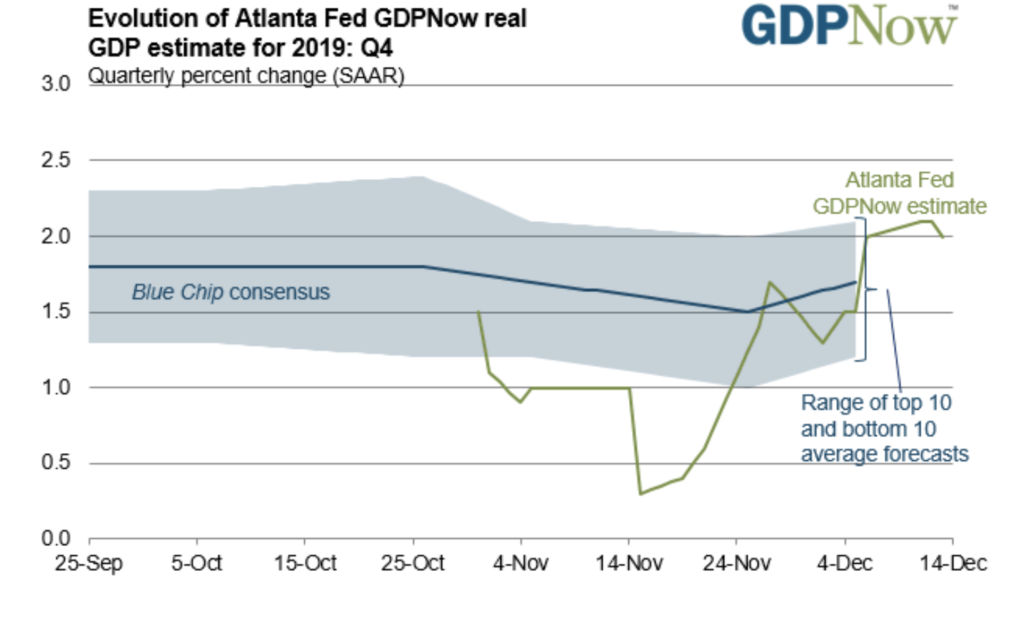