A working paper published by Harvard and the University of Pennsylvania draws a connection between booming home price growth and zoning.

Low inventory has been a thorn in the housing market’s side as an imbalance between supply and demand has pushed home prices to historic highs in markets across the country.

Over the past year, a number of state and local governments have responded to worsening affordability by passing new zoning laws that streamline the approval process and favor higher-density developments.

However, a working paper from researchers at Harvard and the University of Pennsylvania published this month showed a majority of the nation’s most expensive markets, namely San Francisco and New York City, have held tight to strict zoning laws — a move researchers believe is contributing to residents’ housing troubles.

“High house prices, especially in America’s larger coastal markets, have spawned growing
concerns about housing affordability for middle class, not just low income, households,” the researchers wrote. “The potential role of local residential land use restrictions in helping to generate such high prices is an issue of growing importance in the public and academic spheres.”

According to the paper, which is based on 12 years of survey data from 1,107 communities, San Francisco, New York City, Providence, Rhode Island, Seattle and Los Angeles have the most restrictive zoning laws.

Researchers based zoning restrictiveness on the approval process and time, the stringency of open space and lot size requirements, and the number of fees builders must pay.

“These places tend to have at least three different entities that must approve (and, thus, can veto) a project,” the researchers said. “In addition, there is a more intense level of involvement in the regulatory process reported on the part of public and local officials in the places we rate as the most highly regulated.”

“These jurisdictions are also likely to have open space requirements and exaction fee programs imposed on builders,” they added.

According to an article published by Fast Company, San Francisco’s modern zoning woes stem from a series of zoning decisions made nearly 150 years ago. Writer and historian Hunter Oatman-Stanford points to the 1870 Cubic Air Ordinance, which determined the minimum size of a boarding house room.

Although the ordinance was supposedly created with good intent, Oatman-Stanford said it was used to target Chinese renters and landlords and began San Francisco’s long history of exclusionary zoning.

Fast forward to today and San Francisco has a hodgepodge of zoning laws that some experts say is exacerbating the city’s affordability crisis — a near-universal 40-foot building height maximum, land-use rules that favor single-family homes and duplexes, and rules on the locations where buildings can cast their shadows.

San Francisco has been working to improve the number of permits it issues (94.6 percent increase to 6,270 in 2017), however the city is far behind its coastal counterparts that managed to issue at least 8,000 permits during the same time period (San Jose, Portland, and Boston).

Commissioner Rich Hill told the San Francisco Examiner in April the city is doing “OK” in housing production, but “given our housing crisis, which is severe, we’ve gotta do 10 times better than OK.”

San Francisco isn’t alone in its zoning and building troubles — according to a recent report published by the city’s Department of Planning, New York City added 509,000 new housing units from 2001 to 2008. The city added another 457,000 units in the following decade.

“New York City has gained jobs very rapidly, [but] the region as a whole has not produced enough housing,” former Department of Planning director Eric Kober told Reason. “The housing that it does produce is not produced in proportion to the amount of existing population that different parts of the region have.”

As the affordability and homelessness crisis in the city reaches new peaks, a number of New York City council members are taking matters into their own hands by proposing new zoning laws for their neighborhoods.

“Rezoning is a way to make sure the people’s interest are defended,” Mayor Bill de Blasio said of his ambitious rezoning goals. “I did not run for mayor to watch people be displaced from their own community.”

“I fundamentally believe we had to use the tools of government to balance the equation, to protect people, to give them a real ability to live in the place they love,” de Blasio added.

When thinking about the battle for affordable housing and rezoning, Providence likely doesn’t come to many people’s mind.

However, the median home price in Rhode Island’s capitol city has risen 4.6 percent year-over-year to $234,782 with Zillow estimating that home price growth will speed to 5.1 percent next year.

Although Providence’s median home price is well below the current national average, a recent report by the Providence Business News revealed 35 percent of residents are cost burdened, meaning they’re spending more than 30 percent of their monthly income on mortgages or rent.

However, the city is struggling to increase its housing stock.

The proposal for a 46-story luxury apartment building is still on the rocks as the various entities involved in the process — including the Department of Zoning and Planning and the Department of Environmental Management — struggle to reach a consensus.

“We should have welcomed this investment with open arms,” Senate President Dominick Ruggerio told the Providence Journal of the city’s reluctance to approve the Hope Tower project. “Instead, we did everything we could to chase the developer away.”

According to the Journal, the city is currently working to approve two new mixed-used housing developments, but no deadline has been set.

Inventory crises could stretch into 2022 and beyond: Zillow 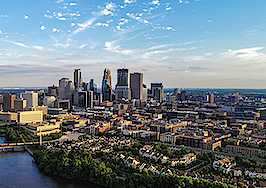