The biggest news for the bond markets was the release of the U.S. December manufacturing report as indicated by the ISM Manufacturing Index. It plunged to a five-month low — the lowest level in a decade.

Before that, two surprises in today’s markets: our overnight droning of the Iranian military leader Qassem Suleimani, and this morning news of the decline in the December Institute of Supply Management Manufacturing Index to 47.2 —the lowest it’s been in a decade. That December number marks the fifth straight month of contraction for the manufacturing sector in the United States.

From paired events like this we learn relative importance. After the U.S. strike, markets opened with fearful trades, yet were improving when the ISM report knocked bond yields back down. And economic weakness matters more than Middle East politics: the U.S. 10-year T-note at 1.80 percent reached a one-month low, and mortgages are back under 4.00 percent.

The late Peter Drucker, perhaps the best U.S. business thinker (and the inventor of the study of management), said about the future: “Nobody can predict the future; the idea is a firm grasp of the present.”

A few of his other excellent observations:

One year ago, markets and the economy had strong momentum: the Fed would either reverse rhetoric and rates, or we would have a recession. Nothing in today’s markets or economy is so poised.

Refrain from falling victim to misinformation — not so much outright fabrication, but exaggeration by hysterical headline or general content. Misinformation aims at our fears and hopes (the easiest targets), so on that basis, I’ll estimate the relative risks in 2020, from least to greatest, for the following:

Housing. This as the least risk of any market. Housing is vulnerable to overbuilding, credit excess and recession. We have none of the first two, and recession risk is low. Of course, the risk to the value of an individual home is local, governed by these three elements: migration, supply and local economy.

Geopolitical risks. Despite events overnight, conflicts make good entertainment, but in this world only temporary market upsets. There are bad guys, but nukes have made large-scale war pointless, and besides, war is bad for business.

We have worried about war in the Middle East interrupting oil supplies ever since the first and last time it did, in 1973. Enough. On grand scale, the U.S. must reduce its global power presence because we can’t afford so much presence. No military operation is more difficult than redeployment under fire. Former President Obama tried passivity, and President Trump has tried power without and in contempt of allies. Short, sharp and limited counterstrokes with allies is the idea. Last night was at least half right.

Currencies. People comment daily about the strength of the American dollar and other currencies around the world. Give it up. Currencies are the manifestation of events, rarely the cause. Changes in relative value mediate different levels of productivity among nations. Brexit is a subset of currencies — locally important, not globally.

The stock market. At the moment, stocks running up are a benefit to housing. Vast growth in retirement accounts will embolden the purchase of more expensive homes. If stocks crater, it will hurt the economy and housing, but if anyone could truly forecast stocks, we’d all know by now.

Climate. Be concerned and study. As a near-term economic hazard, it’s nearly undetectable, but it’s a serious long-term danger. Until we have technological means to decarbonize without ruining the world’s economies, we are not going to make more progress than we currently are. Better not to distract ourselves by worrying about the uncontrollable.

Debt. This long U.S. economic recovery is distinguished by the near-total absence of a credit cycle for the first time in modern history. Re-regulation and strong memory in markets have prevented easier credit and unwise expansion, except in corporate credit. A corporate contraction could have unpleasant feedback into stocks via diminished buybacks. In the long run, debt will matter and bring some discomfort, but 2020 is not the long run.

Trade. Nothing is more important to the global economy than trade. The White House-based trade war is likely to quiet down if only because suicide is unwise in an election year. But there are other risks to trade: China and Germany are outright predators, blind to their own circular risks from misbehavior.

The Fed. Every signal from the Fed — smoke, wig-wag, jawbone, today’s minutes of the December meeting — says that it is content with current policy and has no tilt to higher or lower rates in 2020 or possibly ever.

Here’s Drucker again: “The only thing we know about the future is that it will be different.”

Perhaps the biggest question in 2020: What and when will alter the Fed’s outlook and in which direction?

Demography. Thus far dodging any particular prediction, here we go: The tilt in interest rates is down in the U.S. and everywhere. Aside from the various risks above, the deep driver is the aging of populations in all of the developed world, and outright shrinkage in more places. Japan’s population crested 10 years ago at 128.1 million, now 126.3 million — and shrank in the last year alone by one-half million.

The aged are not particularly productive, and do not consume much except for the resources of the young. One consequence: every nation and its central bank is attempting to push growth faster than possible. In most of modern times such stimulus would produce inflation, and it may, but for the last twenty or thirty years the world has been in a Keynesian “liquidity trap,” with central banks pushing on overdone spaghetti. We are likely to stay trapped, and that’s not bad for housing — unless you’re in one of those places losing people.

Oh, the election? Remember, 2020 will be the Year of the Accident.

Study this chart! This is the 10-year T-note in the last twenty hours. The black horizontal  line at 1.875 percent was yesterday’s New York closing yield. Pre-market trading last night, 2:00 a.m. EST opened down to 1.84 percent, and kept going to 1.80 percent by 6:40 a.m. When the market actually opened, fear had abated, the yield rising. The ISM report arrived at 10:00 a.m. and economic fear took over. At the tail end, another try at recovery stopped cold upon release of the Fed’s December minutes at 2:00.

And all begins again next week, responding to a mountain of brand-new data. 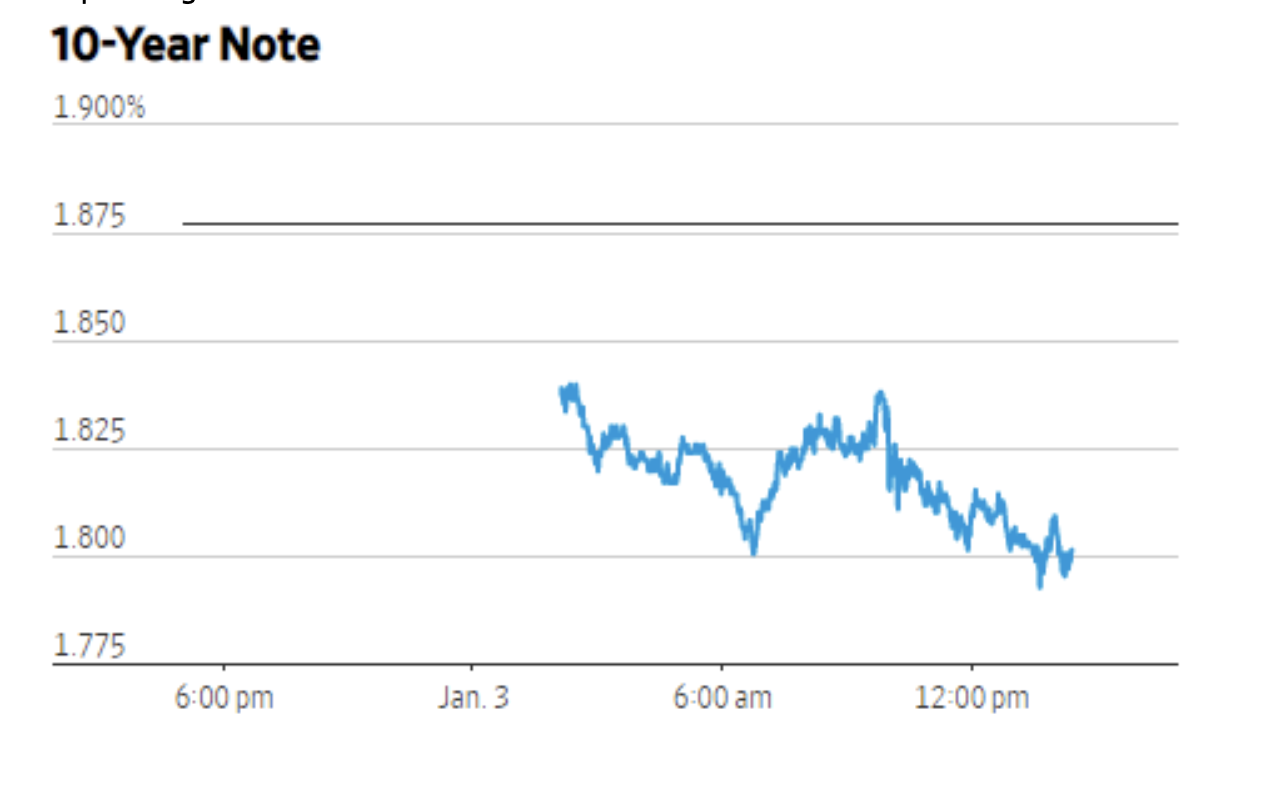