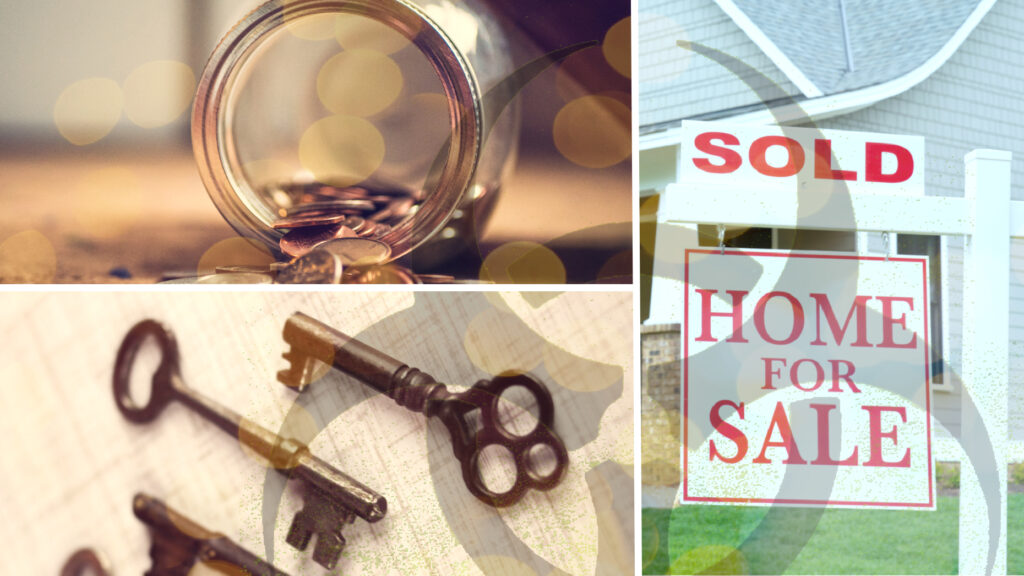 More than two months into the U.S. pandemic, Inman’s second coronavirus survey indicates agents are losing deals. But there are glimmers of hope as well.

It has now been more than two months since the coronavirus pandemic began sending thousands of Americans to the hospital and ravaging the U.S. economy. And according to the results of Inman’s latest survey on the crisis, the economic costs have been higher than most real estate professionals anticipated.

The survey launched on April 27 and ultimately elicited more than 500 responses. It asked real estate professionals a series of questions about the pandemic, including how the crisis’ economic impacts stacked up against their expectations.

Ultimately, 66 percent of the people who responded to the survey said that “the economy took a bigger hit than I expected.” Another 30 percent said the crisis’ impacts have been about what they expected. Only 4 percent said the economic hit was better than they anticipated. 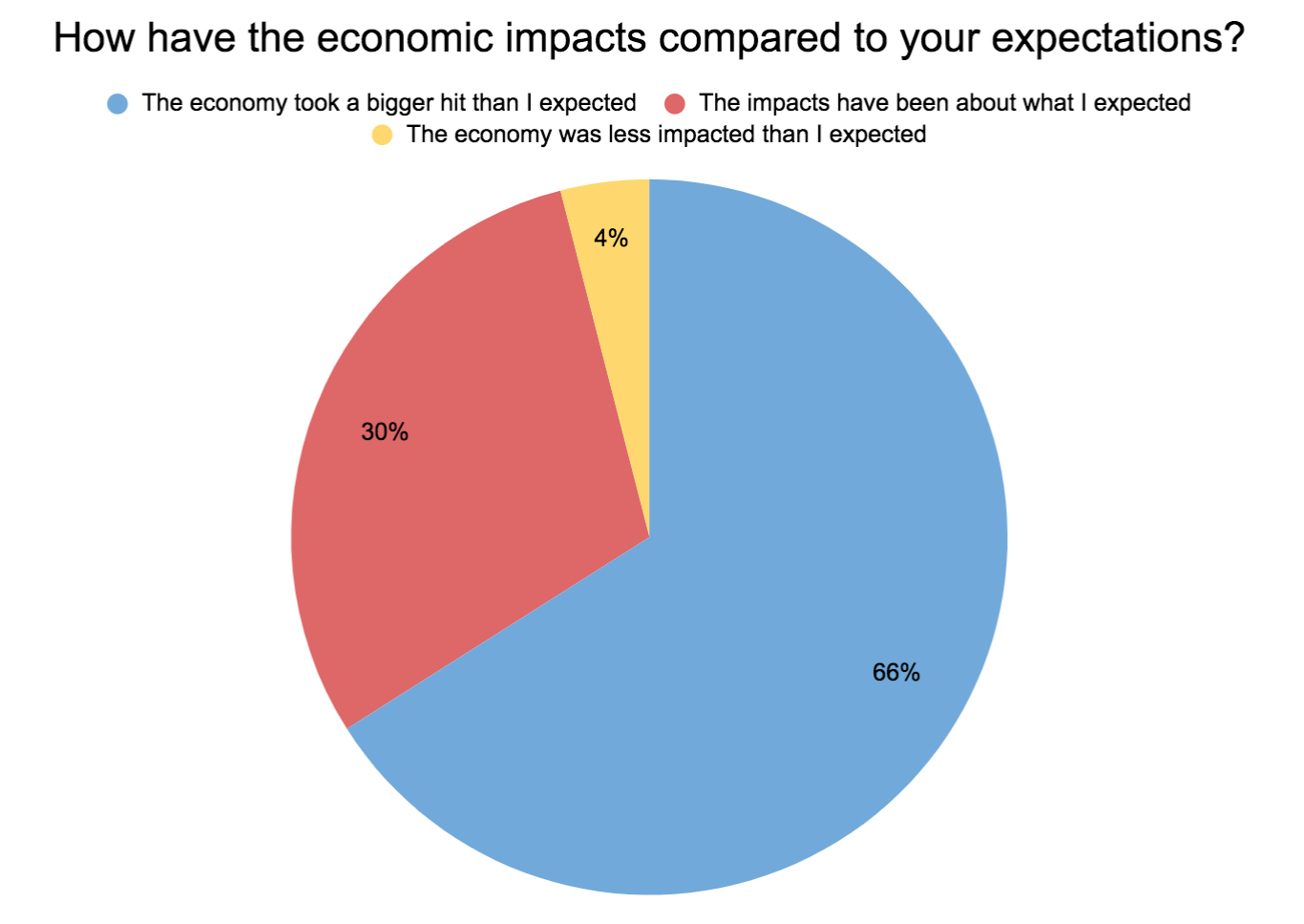 Those findings come after the U.S. has seen week after week of off-the-charts unemployment numbers. The early days of the pandemic also saw the stock market seesawing wildly, and in the time since lockdown orders have left many small businesses struggling to survive.

A plurality of survey respondents, or 43 percent, also said that the overall severity of the pandemic is worse than they expected. Thirty-two percent replied that the severity was in line with their expectations and 25 percent said it was less severe than they anticipated.

But a month later, 65 percent of respondents now say that they have lost deals because of the crisis. 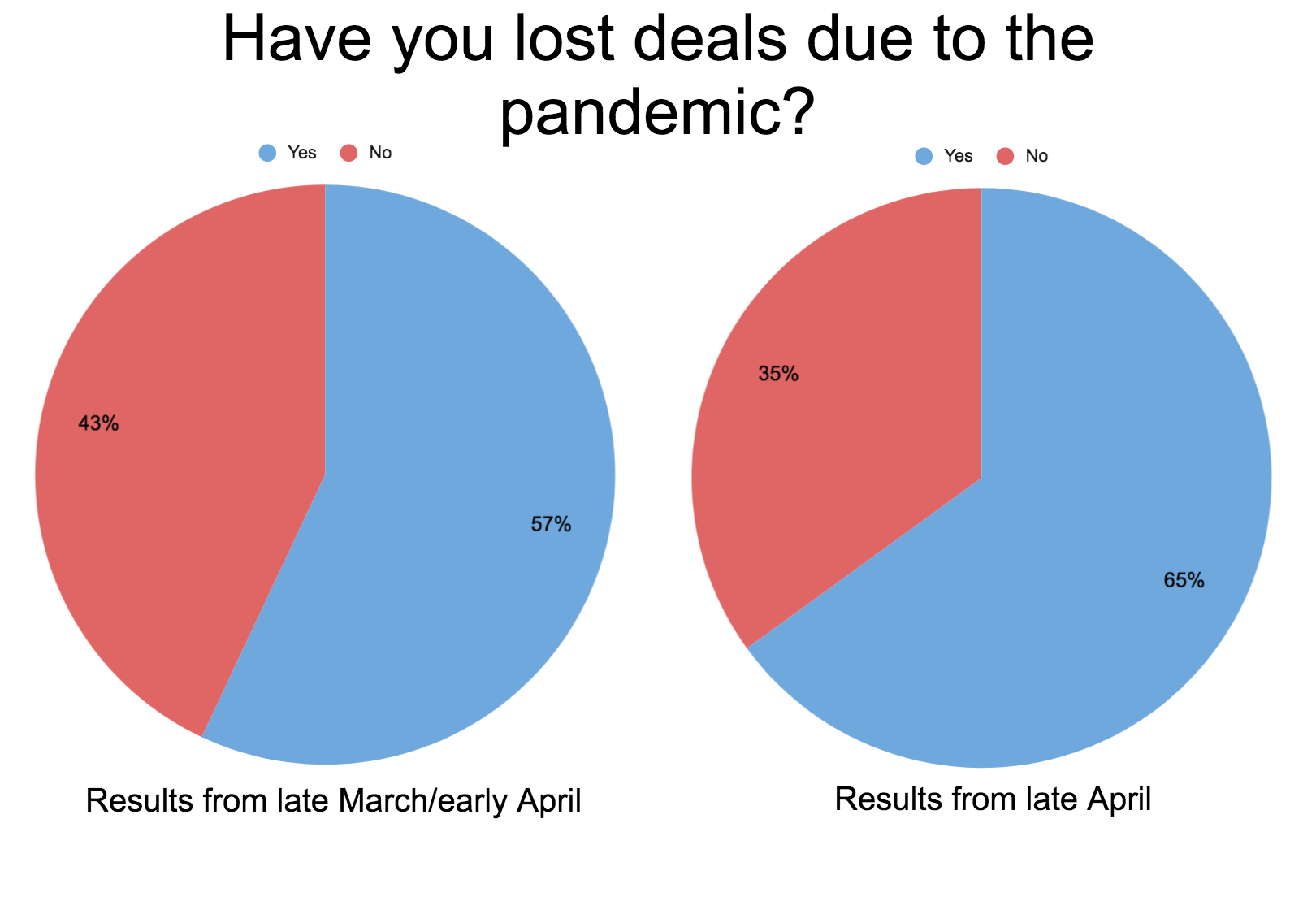 The two surveys also show that the pandemic itself is striking closer to home for many agents: When asked at the end of March if they know anyone who had the illness, only 36 percent of respondents said yes. In the latest survey, however, 56 percent said that they now know someone who has had COVID-19.

The respondents of both surveys are obviously self-selecting, but the results are still illuminative and suggest that the pandemics impacts on the real estate industry are significant, varied and ongoing.

Not everything, however, is getting worse.

For instance, responses to the first and second survey were similar when agents were asked what kind of a threat the pandemic poses for their businesses and careers. In both cases, a majority of respondents said that times would be tough, but they anticipate making it through the crisis. Only 3 percent of respondents to both surveys said they anticipate going out of business or switching careers.

Those findings suggest that a majority of agents do not currently think the housing market is poised to crash the way it did during the Great Recession a decade ago. 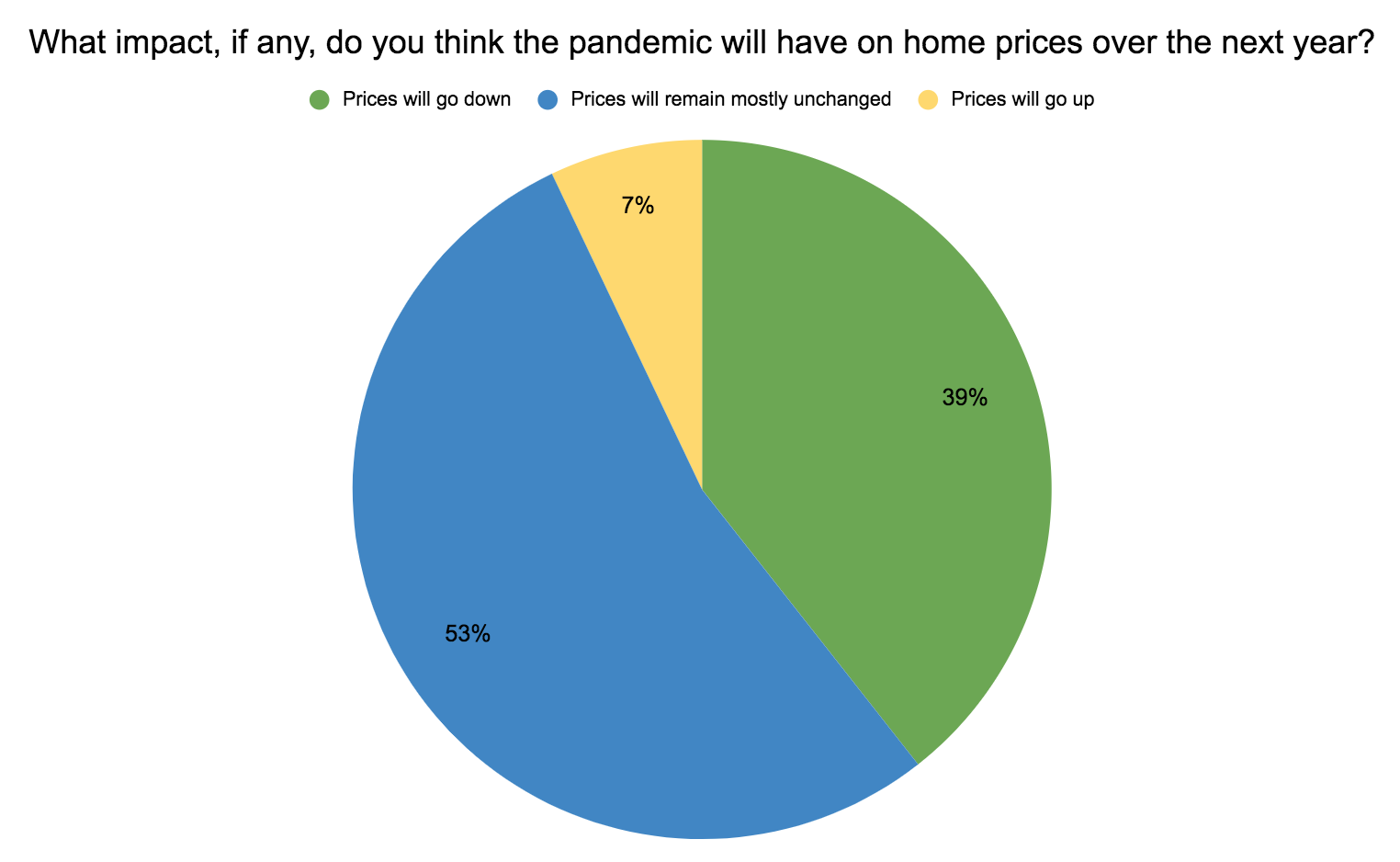 However, in the latest survey, just 28 percent of respondents said consumers were pulling back and 65 percent said they were proceeding with caution. Those findings are aligned with other recent indicators that consumers remain interested in real estate and in some cases may be getting ready to dive back into the market.

Agents have also apparently become more divided over the last month regarding how long they thinks social distancing and other isolation mandates will last. In March, a significant majority, or 59 percent, said they thought it would go on for two or three months.

In the latest survey, however, only 36 percent of respondents thought lockdowns would last for two or three more months. Another 21 percent said social distancing would last “several weeks” and 20 percent believed it would linger for “a month.” The results seem to suggest that more agents are beginning to envision an end to isolation.

On the other hand, more respondents also said this time around that they think social distancing will last six months or longer. The results may consequently reflect regional differences in the way various local officials are reopening their economies. 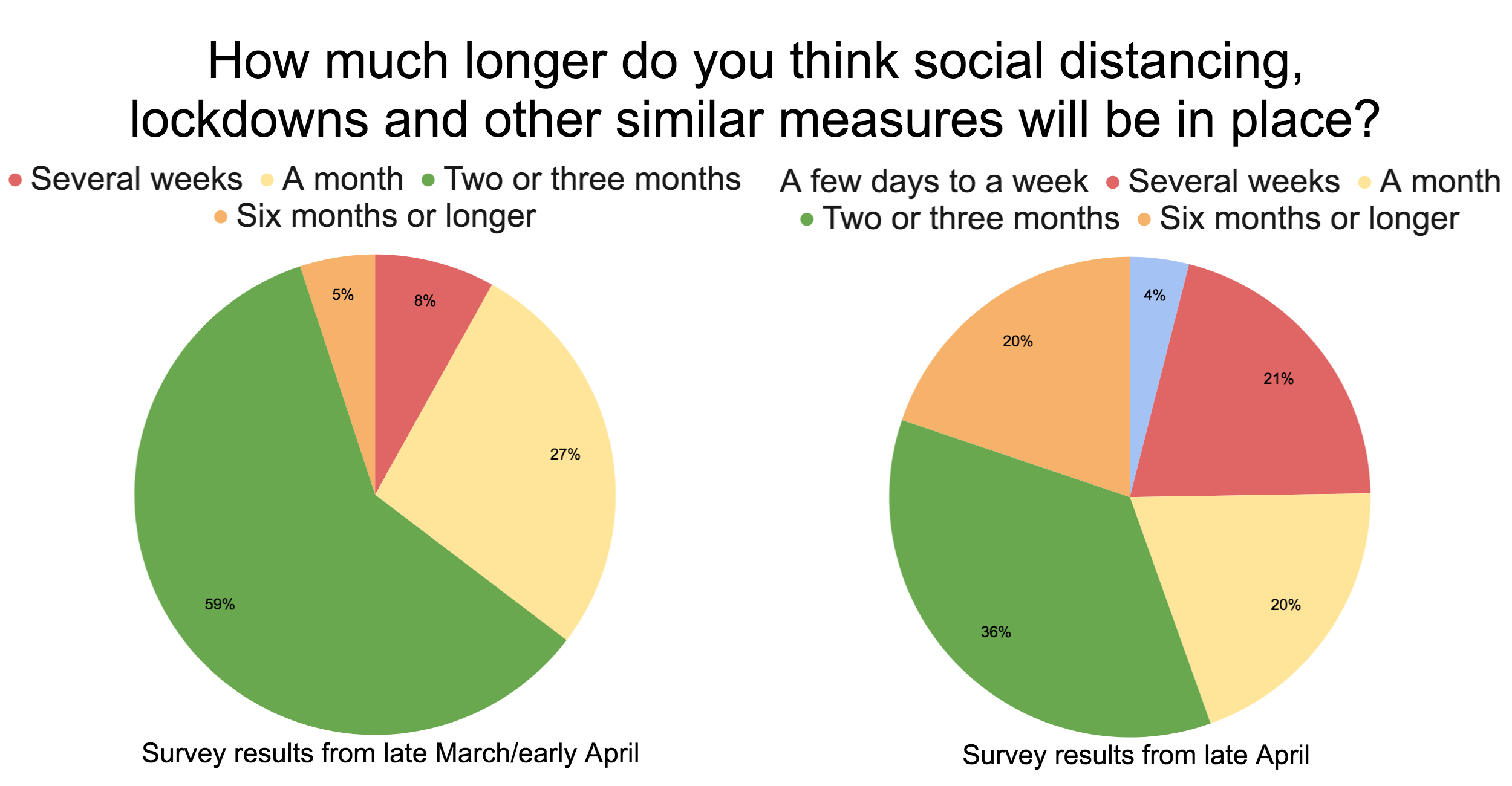 The latest survey also asked agents when they think their local economy ought to reopen. A majority, or 51 percent, said “in several weeks or a month.” Another 32 percent said in “several months,” while 14 percent believed the economy should open immediately.

Whatever happens with the economy, though, actual agent behavior does not appear to have changed significantly over the last month.

In both surveys, most respondents said they were communicating with clients primarily via text messages, phone calls or emails — though the more recent survey did reveal a small uptick in both in-person meetings and in the use of video conferencing to talk to clients. Video conferencing was also the most popular way to communicate with colleagues in both surveys.

The two surveys also asked agents how often they venture outside their homes. The most significant change was that a month ago only 14 percent of respondents said they were going out multiple times per day. In the more recent survey, however, that number jumped to 24 percent.

However, a majority of agents in both surveys said they were going out either once a day or once every few days.

Another significant change uncovered by the two surveys includes apparently growing discontent with the federal response to the crisis. 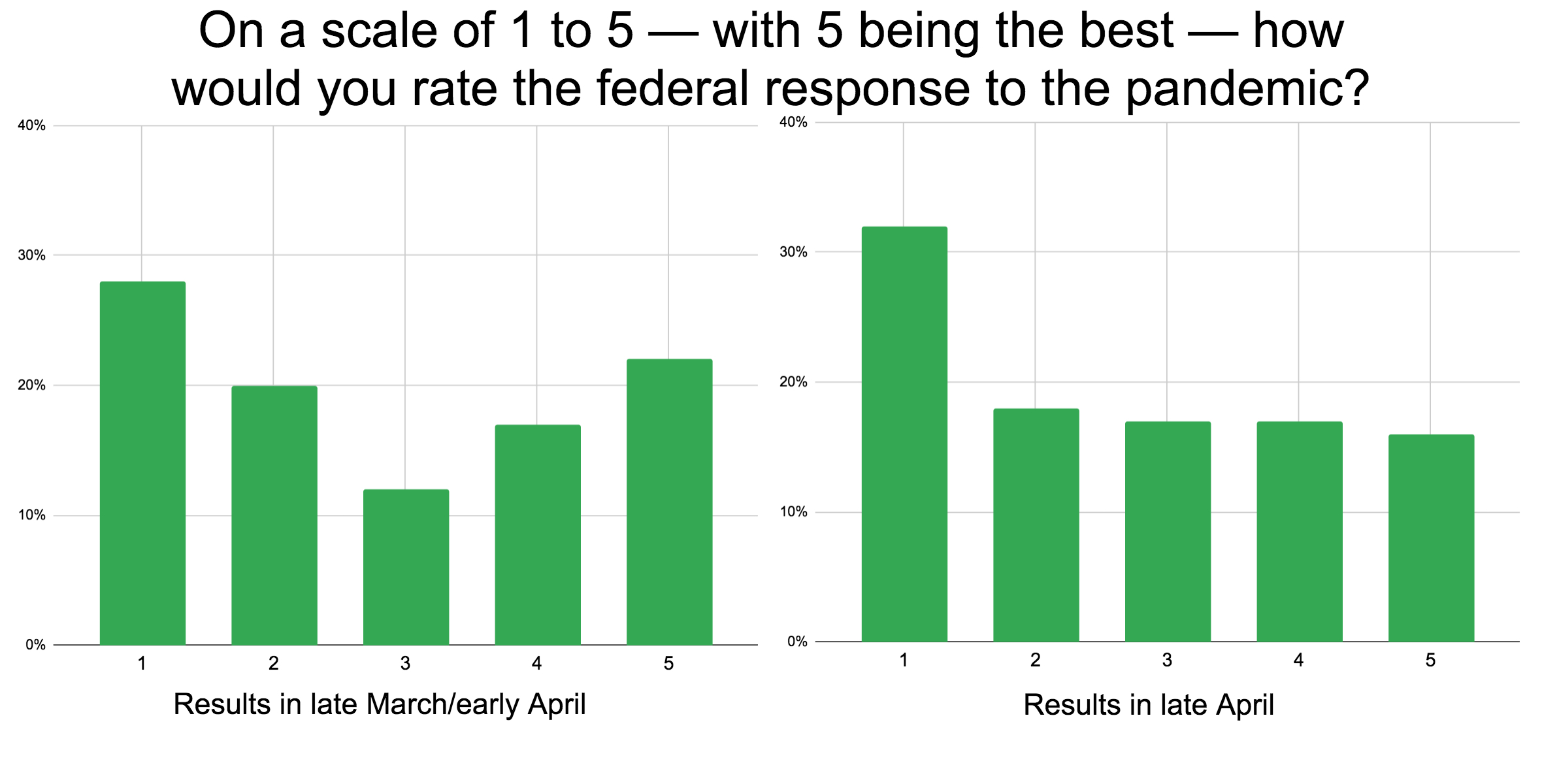 Both surveys asked respondents to rank the feds on a scale of one to five, with five being the best score. A month ago, 28 percent of respondents flunked the federal government and gave it a one. Conversely, 22 percent gave it a five, indicating they were happy with the government’s handling of the pandemic.

It’s not entirely clear why survey respondents might have given the government lower marks this time around. However, a growing death toll and the fact that the economic impacts have been more severe than expected — at least according to the latest survey — have likely contributed to increased levels of dissatisfaction.

New listings can't keep up with demand: Redfin
Back to top
Only 3 days left to register for Inman Connect Las Vegas before prices go up! Don't miss the premier event for real estate pros.Register Now ×
Limited Time Offer: Get 1 year of Inman Select for $199SUBSCRIBE×
Inmanpot
Log in
If you created your account with Google or Facebook
Don't have an account?
Create an Account
Forgot your password?
No Problem