Looking for a little clarity on this week’s news? Windermere Chief Economist Matthew Gardner takes a look at housing affordability and what it might take to solve the nationwide problem.

A decade ago, we started to emerge from a period which saw the United States experience the greatest contraction in housing prices that this country had seen since the Great Depression. Well, that was then, and this is now. How times have changed.

Housing has not only recovered all the value that was lost during the Great Recession, but U.S. median home prices are now 23.5 percent above the 2005 pre-bubble high.

Given that we have now seen over eight years of significant price growth, we want to take a look at housing affordability — an issue in several markets across the country.

Although we are going through a period of COVID-19-induced home price contraction, I believe that sale prices will pick back up from this temporary “blip” and that affordability issues will remain and will likely get worse as we move forward. 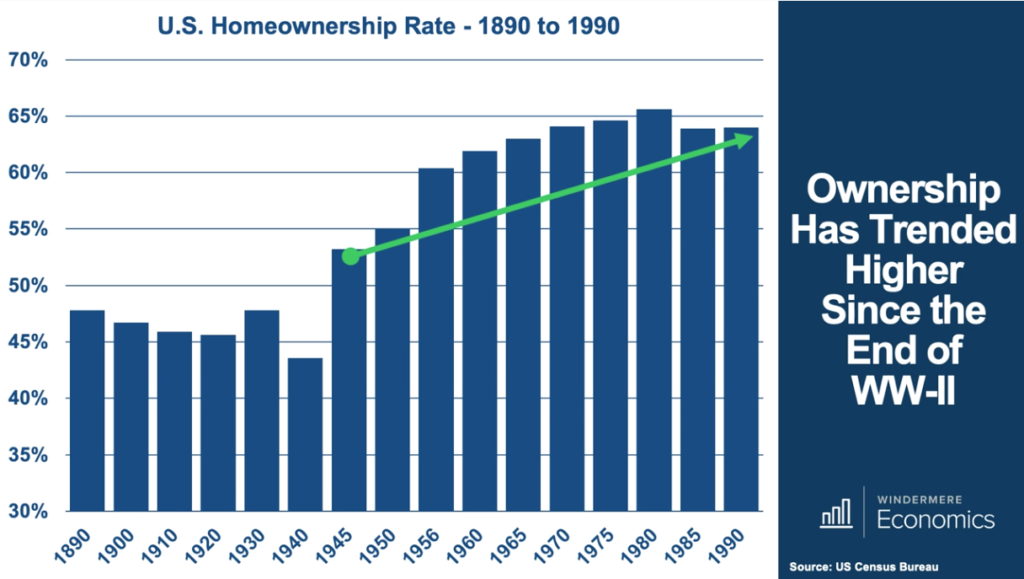 And to get a grasp of the nature of the issue, it’s important to look at homeownership over time, and to do this, I pulled data going back to 1890 that shows the share of American households that owned their homes as opposed to those that rented.

As you can see, homeownership dropped in the first half of the century — mainly because of the depression — but it’s been on the rise since the end of WWII when the GI Bill offered, along with many other benefits, low interest rate mortgages for returning GIs. 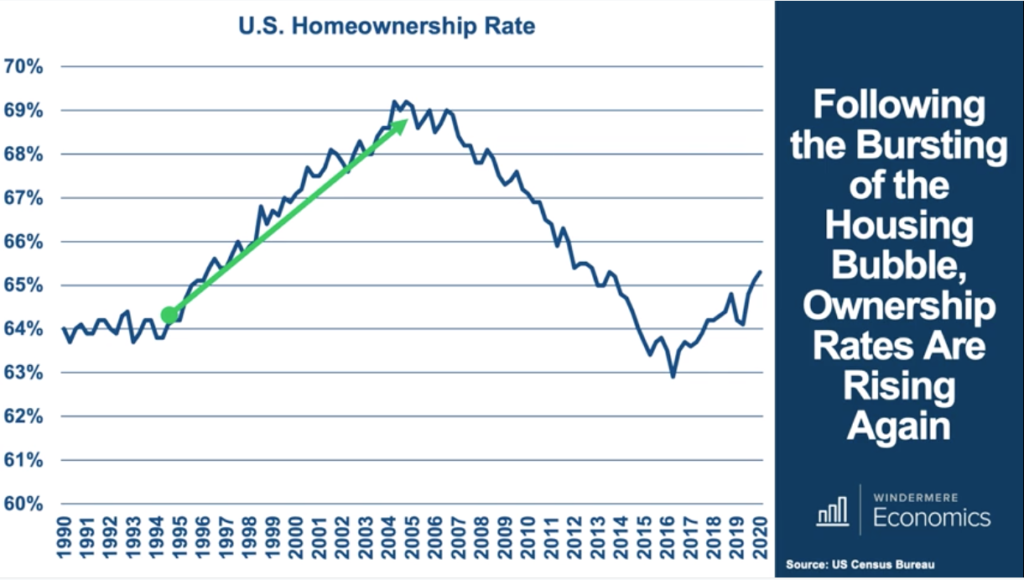 And when we look at more contemporary data, you can see the homeownership rate took off again in the mid 1990s — and this was because of the Clinton Administration’s 1995 National Homeownership Strategy — which was a major plan to, and I quote, “boost homeownership in America to an all-time high by the end of the century.”

Well, they didn’t quite get there, but the charge continued with President George W. Bush and his plan to increase homeownership — the American Dream Down Payment Initiative — a strategy to assist first-time homebuyers with obtaining a down payment to buy a home.

And as you can see, it worked, with the homeownership rate rising to peak in 2005 before the housing bubble started to deflate and then burst in 2007.

So if we were creating lots of households that were becoming homeowners, and demand was there, what was going on with the supply? 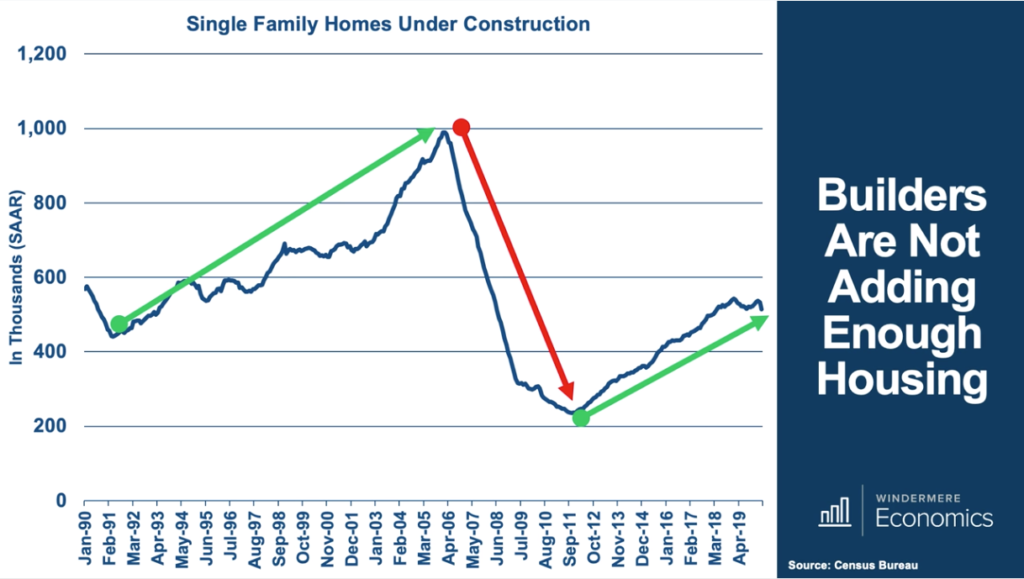 Well builders stepped up to the challenge with a peak delivery of new single-family homes hitting 1 million units in 2006. When the bubble burst, construction activity fell off a cliff.

But even as we emerged from the Great Recession, you can see that the number of new homes being built has not increased significantly. 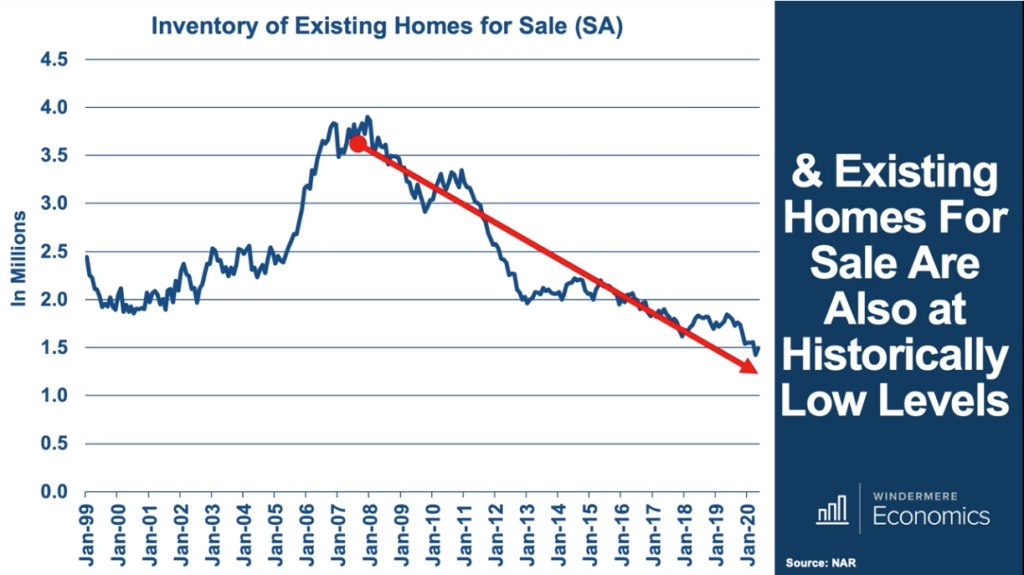 And because we weren’t building more, would-be homebuyers had to turn their attention to the resale market, but that wasn’t helping either. As you can see, the number of existing homes for sale is at a generational low, and I just don’t see any reason for this number to rise significantly.

So, my point here is that we have demand from buyers, but these new households — that really want to buy — well, they are finding that supply in many markets is very limited with low levels of inventory in both the resale and new home arenas. And what happens when you get a supply-demand imbalance? 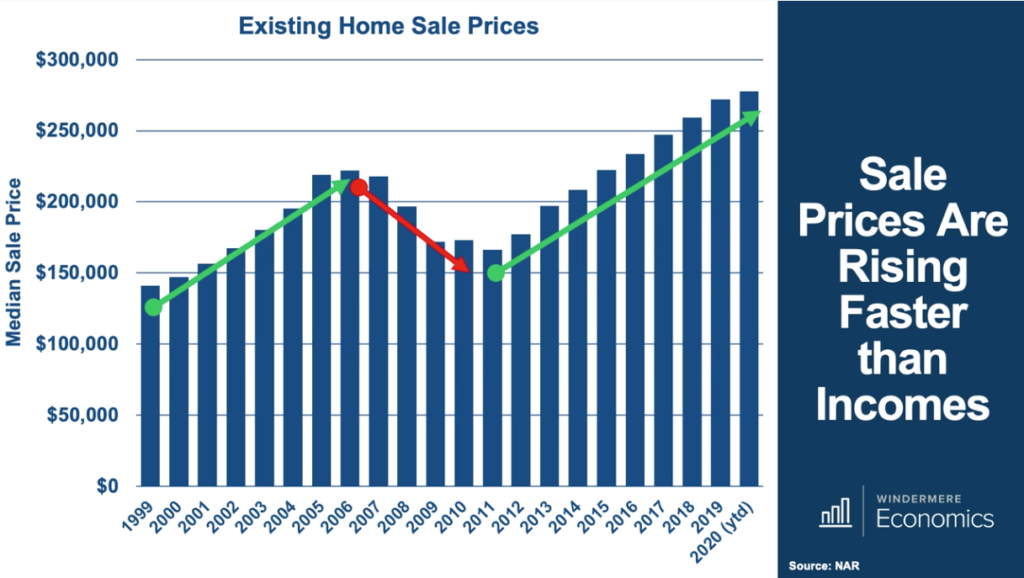 And that is central to the issue we face today. Inadequate supply — in combination with rising, demographically driven demand — has pushed home prices up to levels never seen before, but more importantly, prices have been rising at rates significantly faster than incomes, and that causes affordability issues to appear. 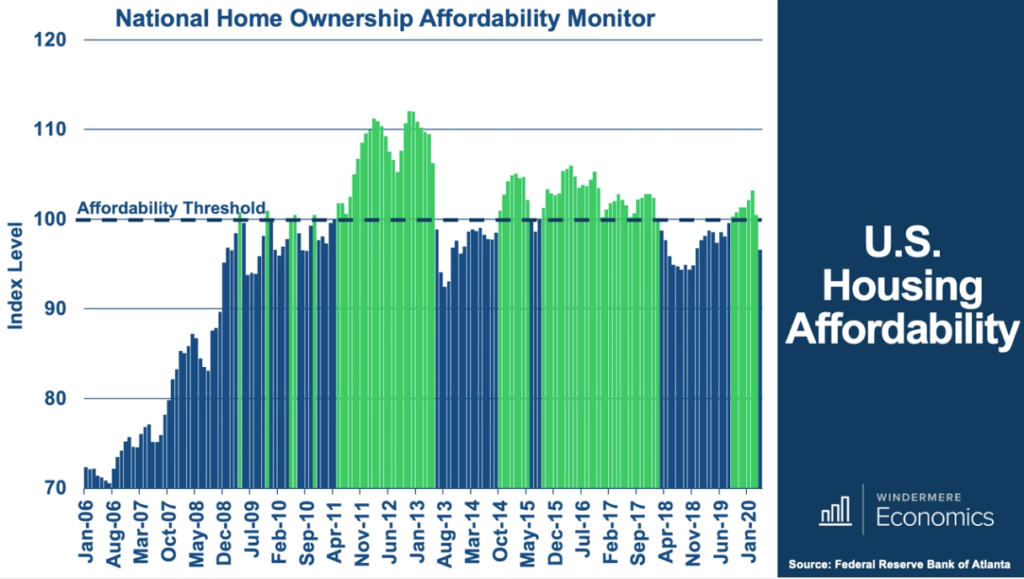 There are lots of data sources that look at housing affordability, but I like this one which is produced by the Federal Reserve Bank of Atlanta. Its index measures the ability for a household making median income to absorb the annual costs associated with owning a median-priced home, and it presents an accurate national view of home affordability.

Affordability started to improve and looked good in 2011, as that was the year that home prices bottomed, and we were actually looking pretty good until early 2018 when affordability issues reared up again.

Now, we did see affordability rising again last year, but that can simply be attributed to mortgage rates that were trending lower. And, as you can see, data for April showed us falling back below the affordability threshold again.

Now I can hear some of you saying to yourselves, “Hang on just a minute, my market is seriously unaffordable, so how does that work?” And if you were saying that, you would be quite right. But, as the old saying goes: “Not all markets are created equal!” 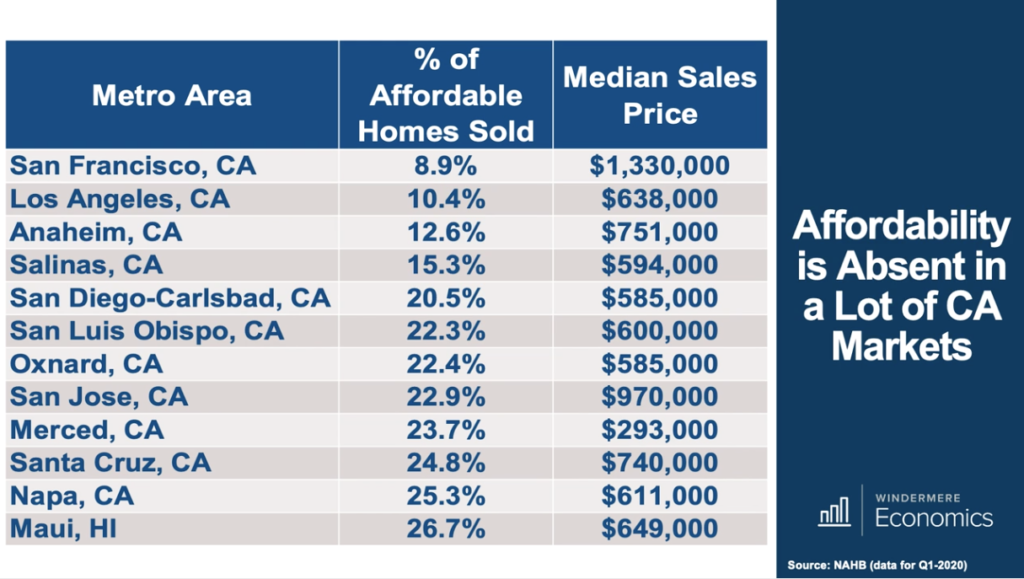 This data is from the National Association of Homebuilders who put out a different type of index that looks at affordability by analyzing the percentage of homes sold in a particular quarter that would have been affordable to households that were making median income for that area.

And here I’m showing you the least affordable housing markets because not only are the numbers sobering, but they also offer a pretty good explanation as to why we have seen a flight away from some Californian markets. Affordability is a significant issue in much of the state.

How can we fix this?

Well, if truth be told, it really isn’t that difficult — in theory!

All we need to do is to build more housing — lots more — but also build cheaper. We need to significantly increase to stock of entry-level product. Why? Well, demographics are going to play a significant part in future housing demand. Millennials are out there in massive numbers, and yes, a lot of them want to own a home, but they are being priced out of many markets across the country right now.

You have all likely heard the theory of a COVID-19-induced migration away from our major job centers with workers able to conduct their business from home. And if that were to happen, then it would certainly help, but only for buyers who choose to move to significantly cheaper locations, which could mean moving a long way from where they currently live. Although this does sound like an elegant answer to our housing problem, I am not convinced that it will solve all our affordability woes.

The restricted inventory of housing in much of America is due in large part to zoning restrictions, building codes and other issues that add significantly to the cost of building a home. That’s the major reason builders are not building more. It’s very expensive. But even if we can build more, affordability concerns won’t disappear, but they will diminish quite dramatically.

Therefore, the public sector needs to do all it can to help builders to produce more units. Because without assistance, the affordability barriers that limit those who would benefit from homeownership will remain in place.

Nothing will be solved soon. But we need to figure out how to solve this crisis and start to get back to a more balanced market — and balance is something that we haven’t seen for quite some time.

Next week, we’ll take a deeper dive into the world of the young homebuyers that we mentioned today.