Looking for a little clarity on this week’s news? Windermere Chief Economist Matthew Gardner discusses how the housing market continues to bring out buyers in an economy still mired by the COVID-19 pandemic.

Last week, there were only a few significant announcements. However, they were important ones. So, let’s get straight to the numbers! First up is the Case Shiller Index.

The data release for July. That’s right — the data we just got is three months old. Anyway, the numbers were pretty impressive. 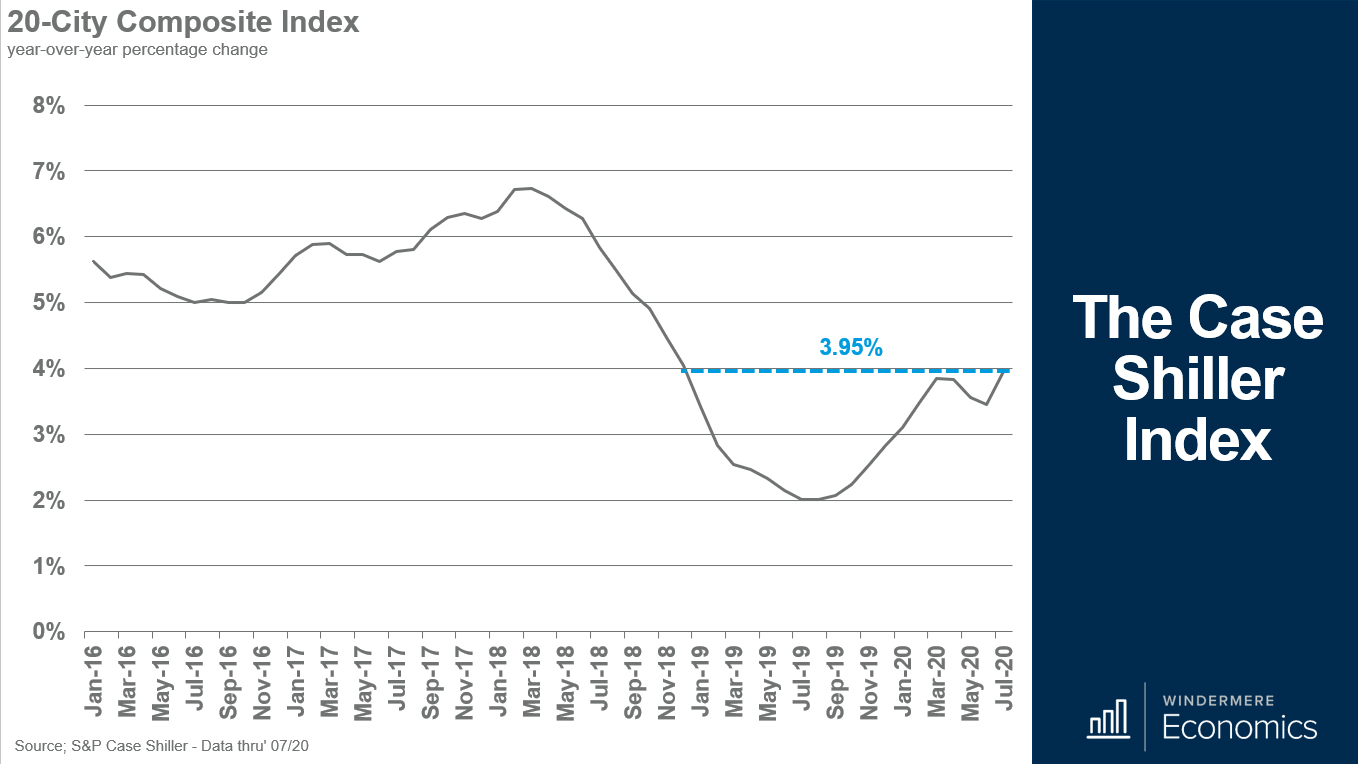 There was a reacceleration in the index following three straight months of a COVID-19-induced deceleration, with the 20-city index rising by 0.6 percent on the month and higher by 3.95 percent year over year. It’s also worth noting that this is the best annual gain since December of 2018. 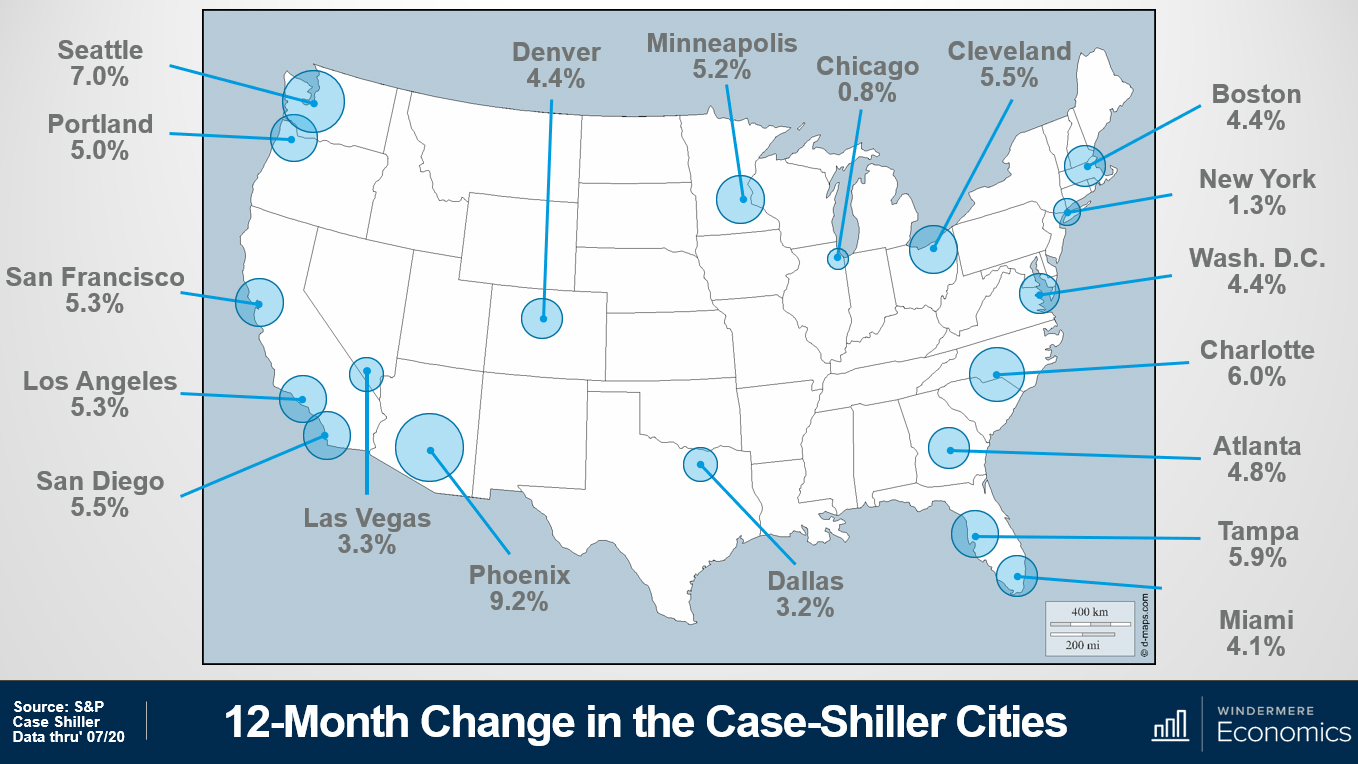 We saw month-on-month gains in all cities other than New York, where the index dropped by 0.1 percent. I did some research on this. The drop in New York — although a small one — may well be due to the fact that business bankruptcies rose by 40 percent since the pandemic really hit, with over 600 businesses filing for bankruptcy in the city.

Looking closer at the data, seven cities are still at levels below their pre-housing bubble peak. That said, I’m more interested in the change in momentum, and this shows the difference between the change in index values over the past year versus the 12 months before that. We are seeing a slowing in the pace of growth in Las Vegas and in Chicago. 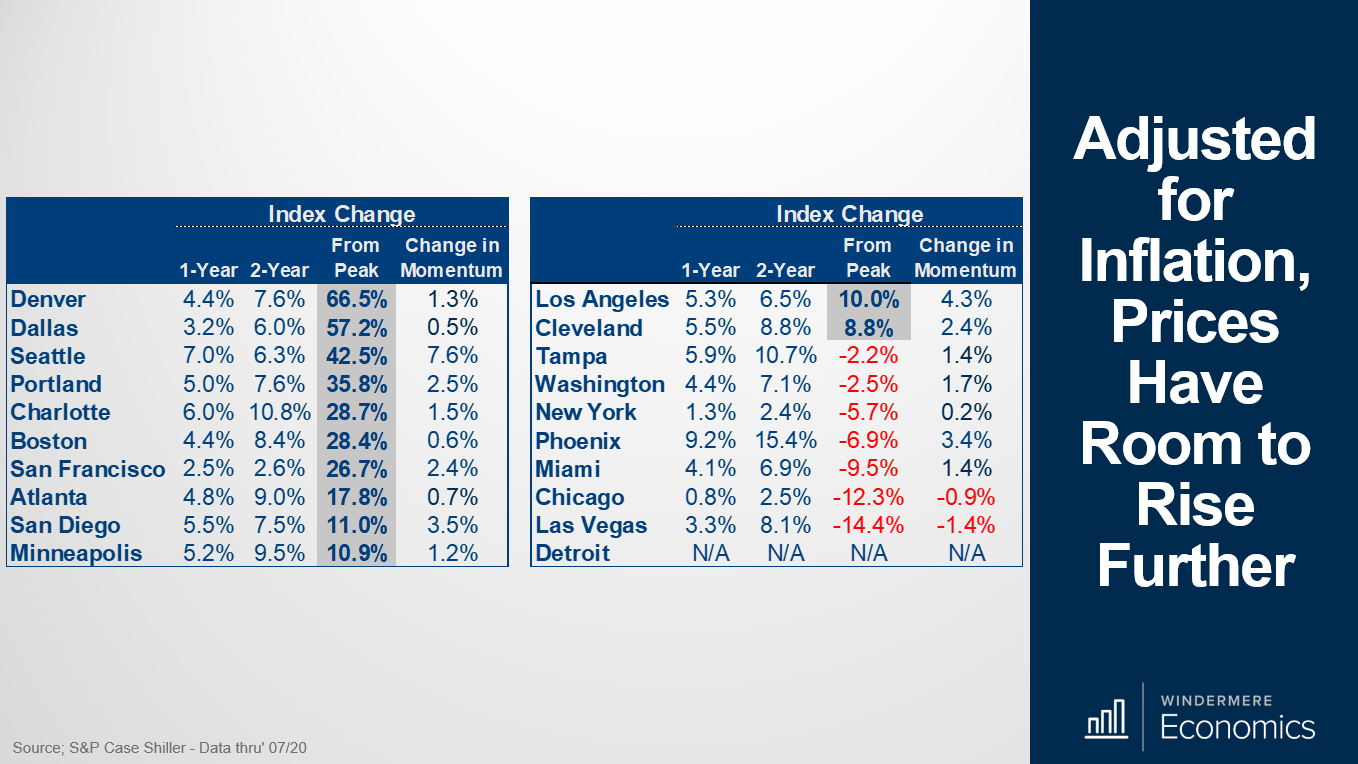 Now, we also saw this in the June data, and I’m thinking that the slowdown in Las Vegas is likely due to its exposure to the hospitality industry. I can only assume that Chicago prices are being impacted by the civil unrest that’s continuing in the city.

In all, this was a generally pleasing report, but I will be interested to see if the upward momentum that has kicked back in can carry on through the balance of the year. My gut says it can.

Next up is consumer confidence, and the index jumped to 101.8 in September from 86.3 in August. This is a massive jump. Even though the number is still well below the 132.6 handle we saw in February before he pandemic hit, the improvement is palpable. 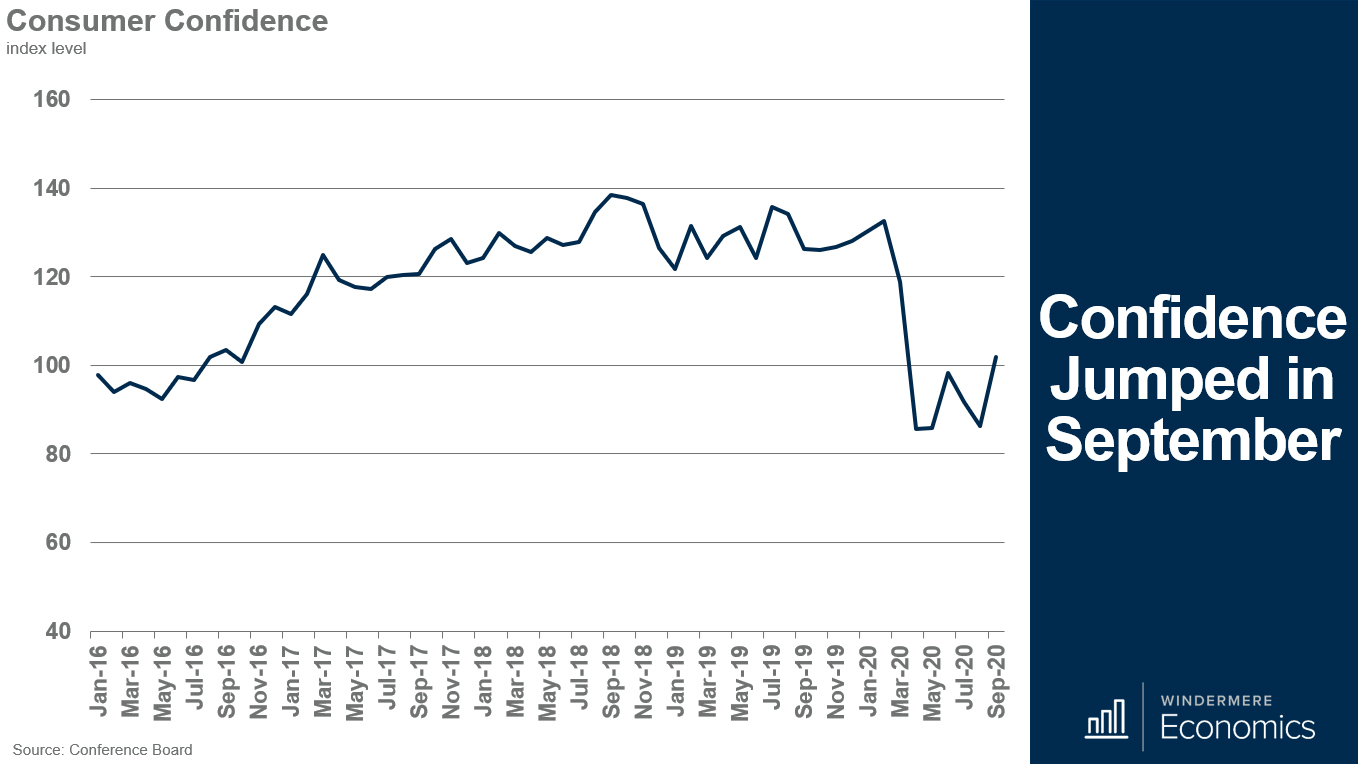 The Present Situation Index, which measures how we’re feeling about the economy today, rose from 85.8 to 98.5. This index was at 169.3 in February.

And the Expectations Index, which measures how we expect the economy to be performing in six months’ time, jumped from 86.6 to 104.0. That’s not far off the 108.1 number we saw in February. 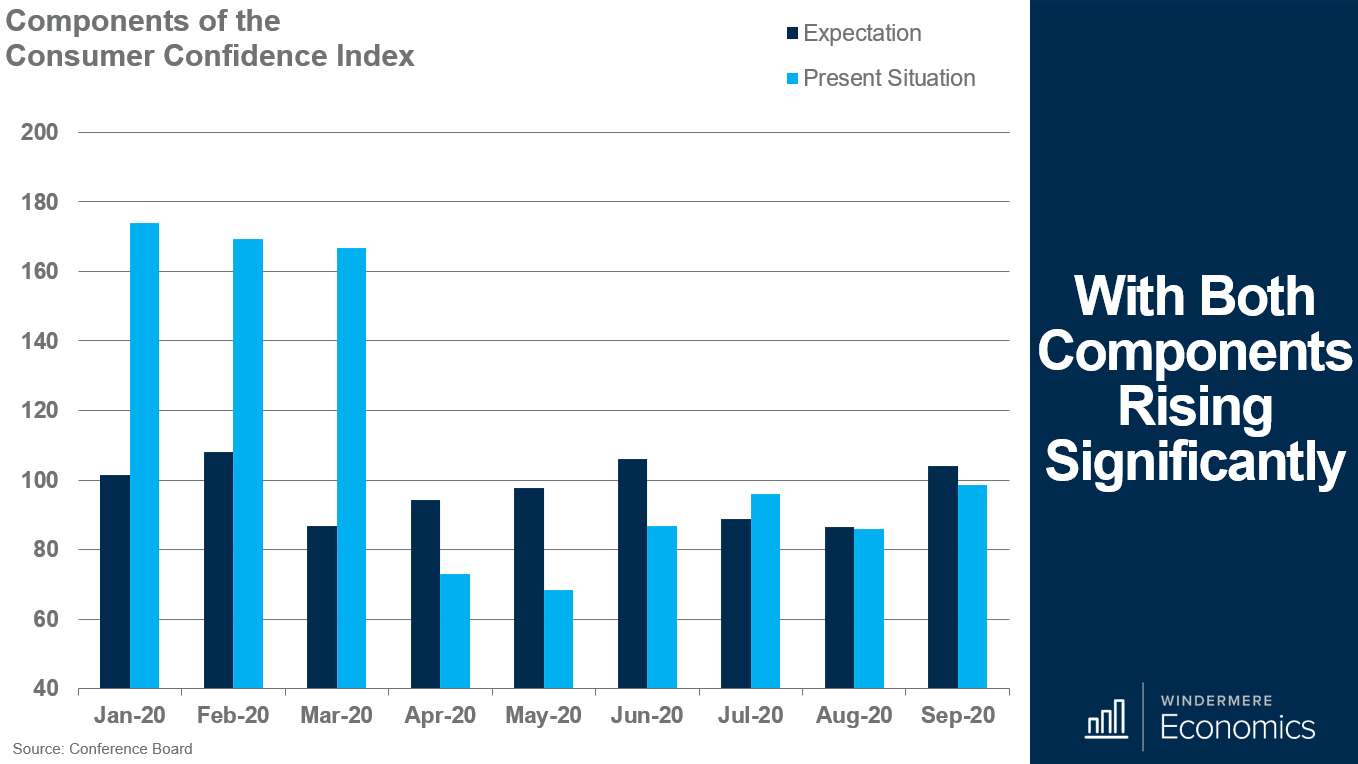 My takeaway from this report is that consumers are seeing some improved business conditions, and they did express greater optimism about their short-term prospects. That could support increased consumer spending as we move into the latter stages of this year.

Alright, now we’ve got numbers from the National Association of Realtors (NAR), which released its latest data on pending home sales across the U.S. The numbers were nothing short of remarkable.

The index jumped by a very significant 8.8 percent between July and August, and now, it stands at its highest level since NAR started this index back in 2001. Oh, and it’s also worth mentioning that the index is up by 24.2 percent from last August. 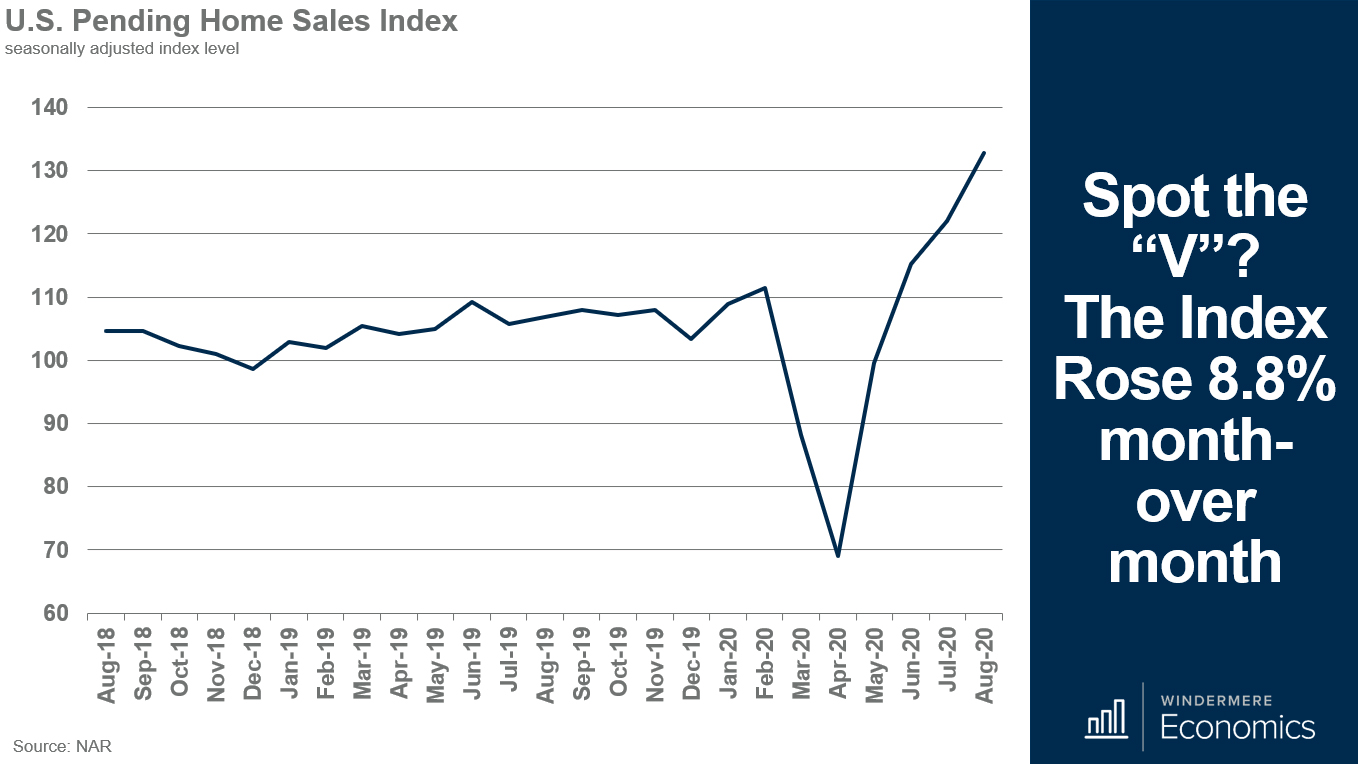 And as you can see here, sales were strongest in the West, which rose by 13.1 percent in August. They were up by over 8 percent in the South and in the Midwest, and were over 4 percent higher in the Northeast part of the country. 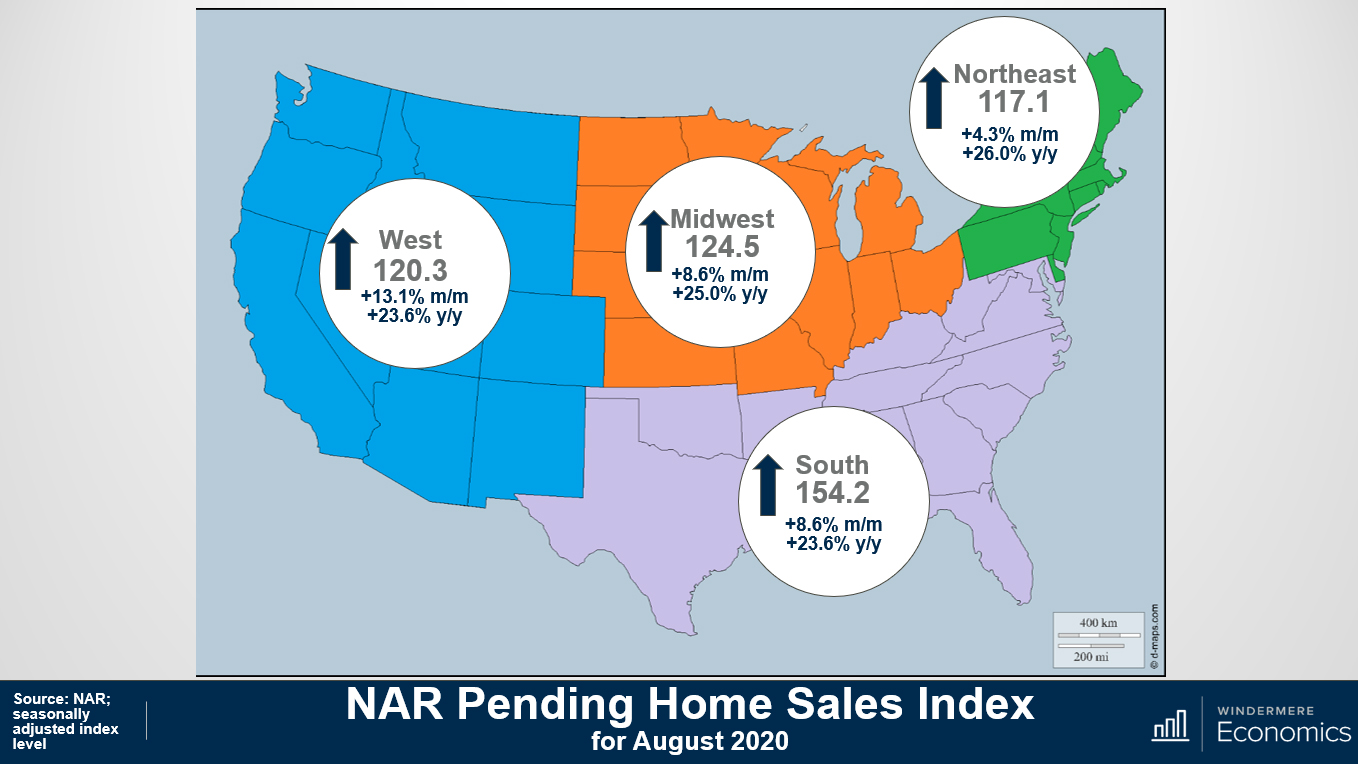 What surprised me the most is that the numbers jumped even in the face of historically low levels of supply in the country. It’s clear that a belief in the housing market is continuing to bring out buyers, and rock-bottom mortgage rates aren’t hurting either.

It’s also worth adding that the data suggests to me that closings last month are likely to have picked back up, and I will be very interested to see the September numbers when they are released on Oct. 22.

Last, but by no means least, the September jobs report

Unfortunately, the numbers were far from impressive, with a gain of just 661,000. As you can see here, we still have a long way to go to get back to pre-COVID employment levels, even if we have recovered 11.4 million of the over 22 million jobs that were lost. 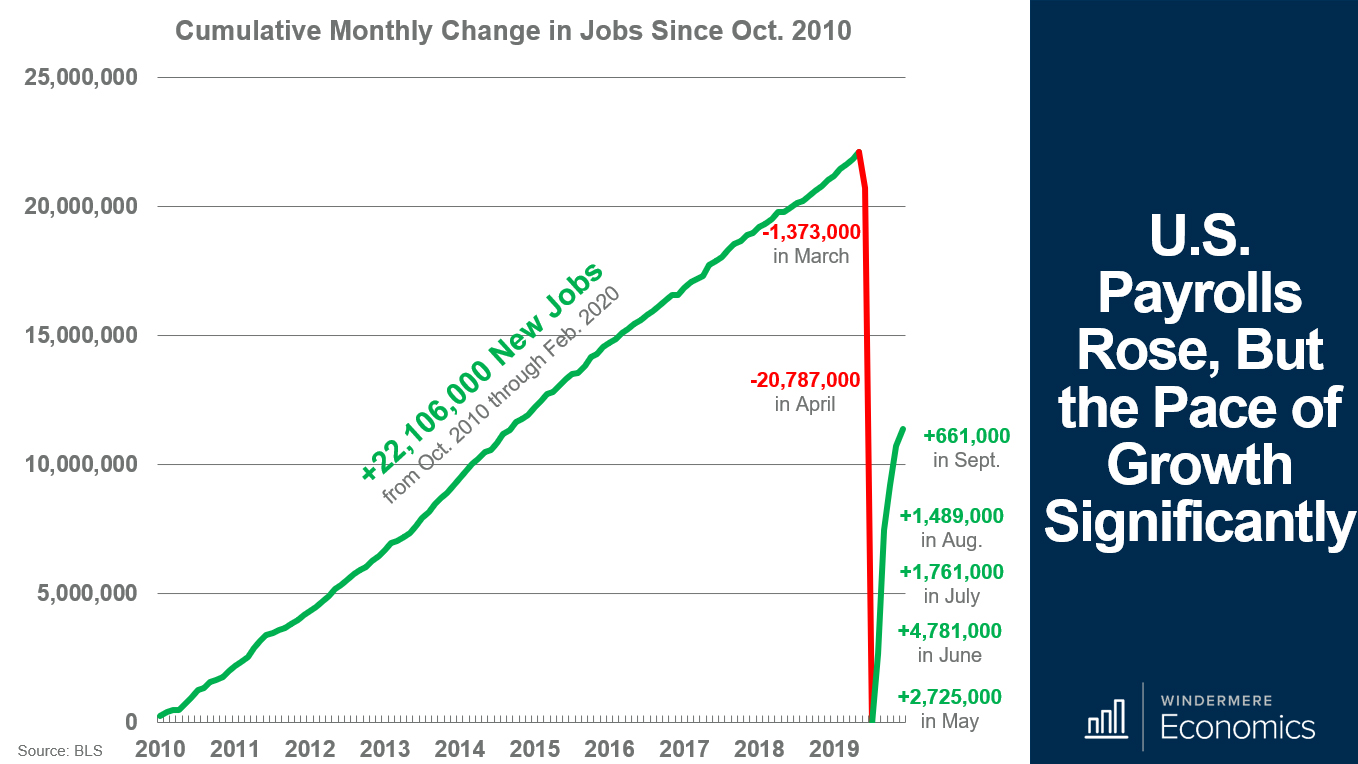 But I was pleased to see the July and August totals revised higher, with the July number bumped by 27,000 to 1.76 million and the already-strong August gains.

In September, we saw solid improvement in the leisure and hospitality, and retail sectors — unsurprising as these were, by far, the hardest hit when the pandemic struck. 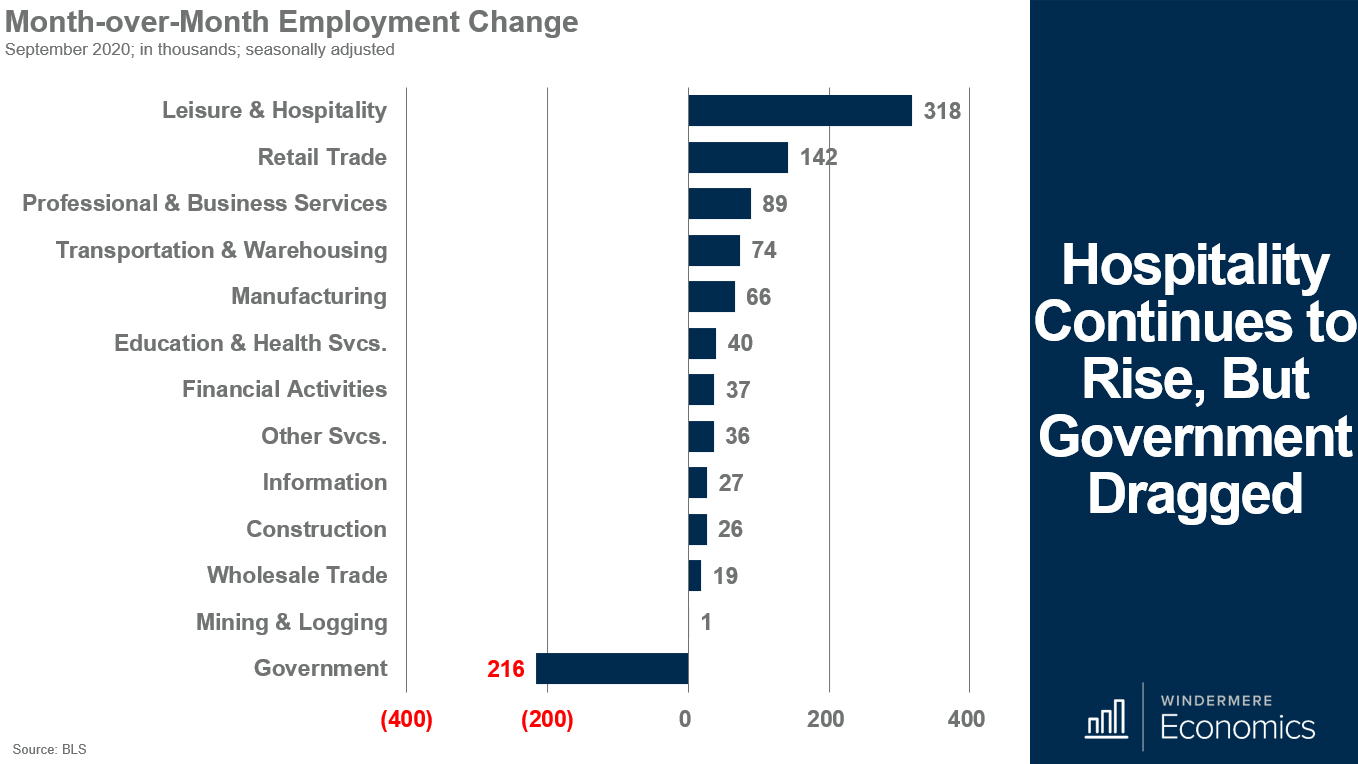 But government employment was the biggest drag in the numbers, dropping by 216,000. This was due to a drop in local and state government education as many schools maintained at-home instruction as well 34,000 census jobs cut.

The unemployment rate came in at 7.9 percent, which was a decent number. However, when I pored through the data, I was disappointed to see a 0.3 percent drop in the labor force participation rate with over 700,000 persons leaving the workforce. This helped the overall rate drop by more than expected. 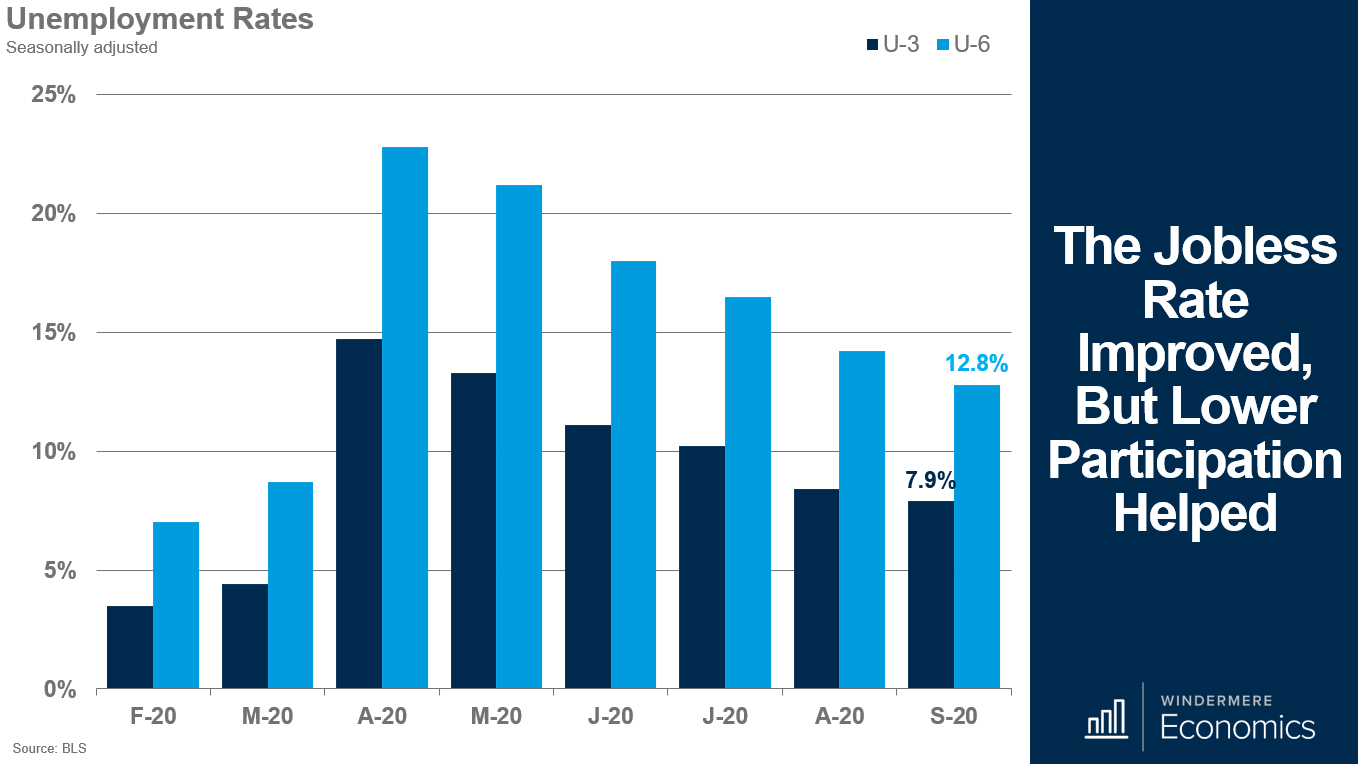 But on a positive note, the U6 report saw a notable decline, falling from 14.2 to 12.8 percent. This report is a more complete measure of unemployment. That’s because it counts discouraged workers (as in, people who want a job, but haven’t been able to look for one for other reasons) and those working part-time who want a full-time job.

That said, given the fact that the president has now been diagnosed with COVID-19, there might be a greater understanding that the virus is vicious and isn’t going to just pack up and go away, and that its effect on the U.S. economy are still very visible.

So, there you have it — my thoughts on last week’s data releases. The housing reports were very solid, and they show that housing remains a shining light in an economy still mired by the COVID-19 pandemic.

Now, I have taken a look at next week’s announcements, and I’m afraid that there really isn’t anything coming up that’s exciting me. So, I went back through the suggestions you’ve sent me, and I have decided to take another look at mortgage rates.

I plan on sharing with you where I see them heading for the rest of the year and also give you my updated forecast for 2021. The numbers are looking good, but I do have some very significant concerns that need examining.