Looking for a little clarity on this week’s news? Windermere Chief Economist Matthew Gardner takes a deep dive into the latest data on household debt and credit and what it might mean for post-COVID economic recovery.

While I was on vacation last week, I got to thinking about some of the amazing datasets that I get to use in my day-to-day business.

Anyway, one day, while I was paddling and contemplating, I was reminded of a little-known report that’s published by the Federal Reserve Bank of New York and one that — at least in my opinion — really doesn’t get the attention it deserves. It’s called the U.S. Household Debt and Credit Report.

Now, before you all tune out, give me just a few seconds because the second quarter report came out last week. While it really does provide some fascinating insights into our own finances, it also offers some great data on housing finance. So, hang in there because I honestly think you’ll find it pretty interesting.

OK, to start — have you ever wondered how much money we, as households, actually owe? Well, if you are interested, I’m going to tell you.

We owe $14.3 trillion dollars. This is a really massive number. To give you some perspective as to just how big this number actually is, America’s annual GDP — which is the value of all the goods and services traded in the country in a year — is around $20 trillion. But that’s not really important. Suffice to say, it’s just a really, really big number. 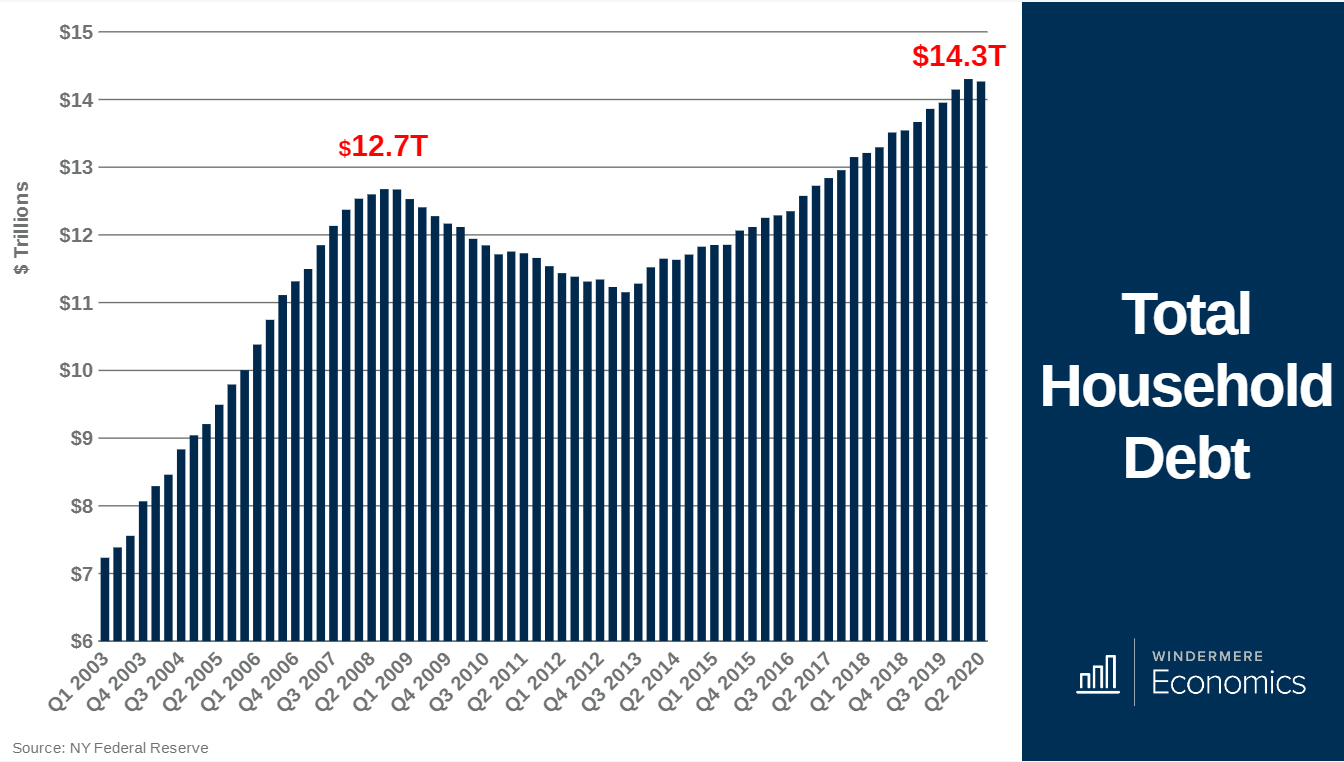 So, when we look at the latest debt number, we do see a drop in the amount we owe of $34 billion in the second quarter. This is interesting, as it’s not only the first drop we’ve seen since mid-2014, but it’s also the largest contraction since 2013. We can totally blame COVID-19 for this drop but, that said, we’re still $1.6 trillion more in debt than we were at the previous peak back in 2008.

Who do we owe all this money to?

Well, when we break the debt into its component parts, you’ll see that, unsurprisingly, most of our debt is tied up in our mortgages, which account for just shy of 70 percent of total debt. We owe around $9.8 trillion.

This is followed by student loan debt at $1.54 trillion. (Yup! Over $1.5 trillion dollars in educational expenses.) Then, we have car loans at $1.3 trillion, credit cards at $820 billion, revolving lines of credit at $380 billion and miscellaneous at $400 billion. The miscellaneous grouping includes department store cards, gas cards and the like. 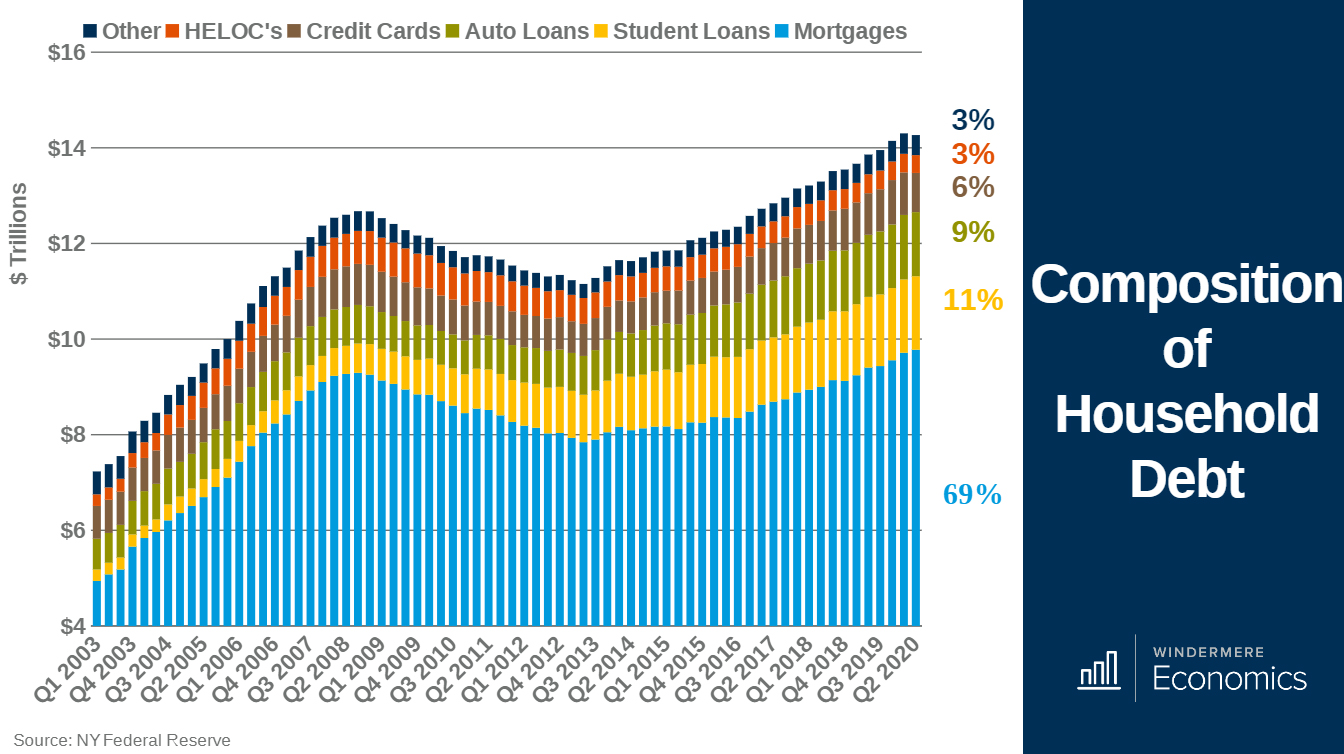 The real takeaway here is that we saw a pretty sharp drop in our credit card balances of roughly $76 billion. This is interesting because it represents the largest drop on record — again, a consequence of COVID-19.

From a headline perspective, nonhousing-related credit balances saw the largest drop in the history of the report. This may not bode well when it comes to the speed of our economic recovery. If we aren’t spending, the economy can’t grow.

OK, we get that we owe a lot of money, but there’s more than that. Remember I mentioned that this report also gives some insights on housing?

Well, let’s start off with some data on mortgages and credit quality — to be more precise, the amount of money borrowed by credit — or FICO score. Of course, this is a big topic of interest in the brokerage community, and here is a chart. Now, I know that there are a lot of lines, but there are actually just two that I want to focus on. 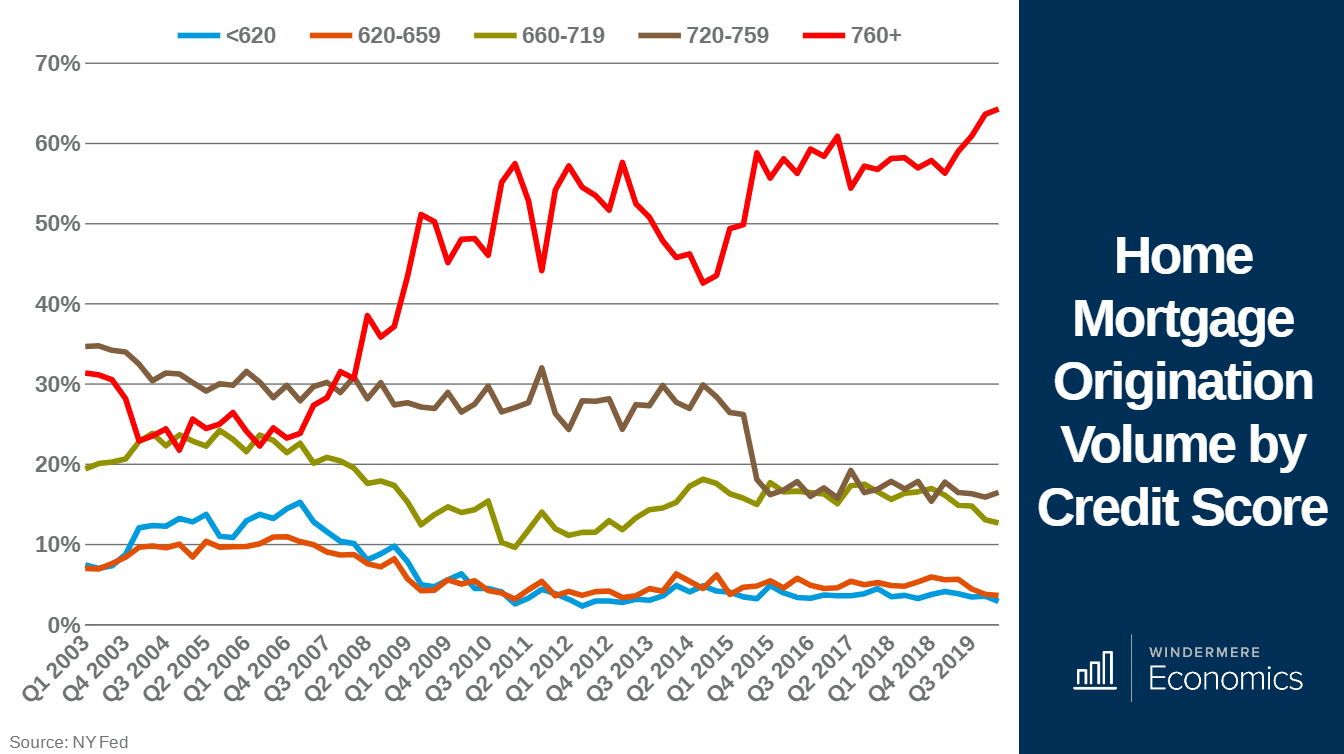 From a low of around 22 percent in 2006 (and other than the period where the government was offering the first-time buyer tax credit), we’ve seen the share of the mortgage market for those with pretty stellar credit rise consistently. It stood at a remarkable 64 percent of total mortgage debt issued in the second quarter.

Clearly, most consumers remain highly qualified to buy homes, even in the current, shall we say “unique,” economic environment. This is good.

But on the other end of the spectrum, consumers with less-than-perfect credit — who, as you can see, were certainly players in the market back in the pre-bubble days — are now a remarkably small component of new mortgage debt, and their share has been trending down even more over the past 18 months. So, credit quality is good, and I do not see any reason that this will change any time soon.

Now, let’s look at who is borrowing money to buy homes

Although this doesn’t look like a very interesting chart, it certainly reinforces what I’ve been harping on about for a very long time now, and that’s the prevalence of younger homebuyers. 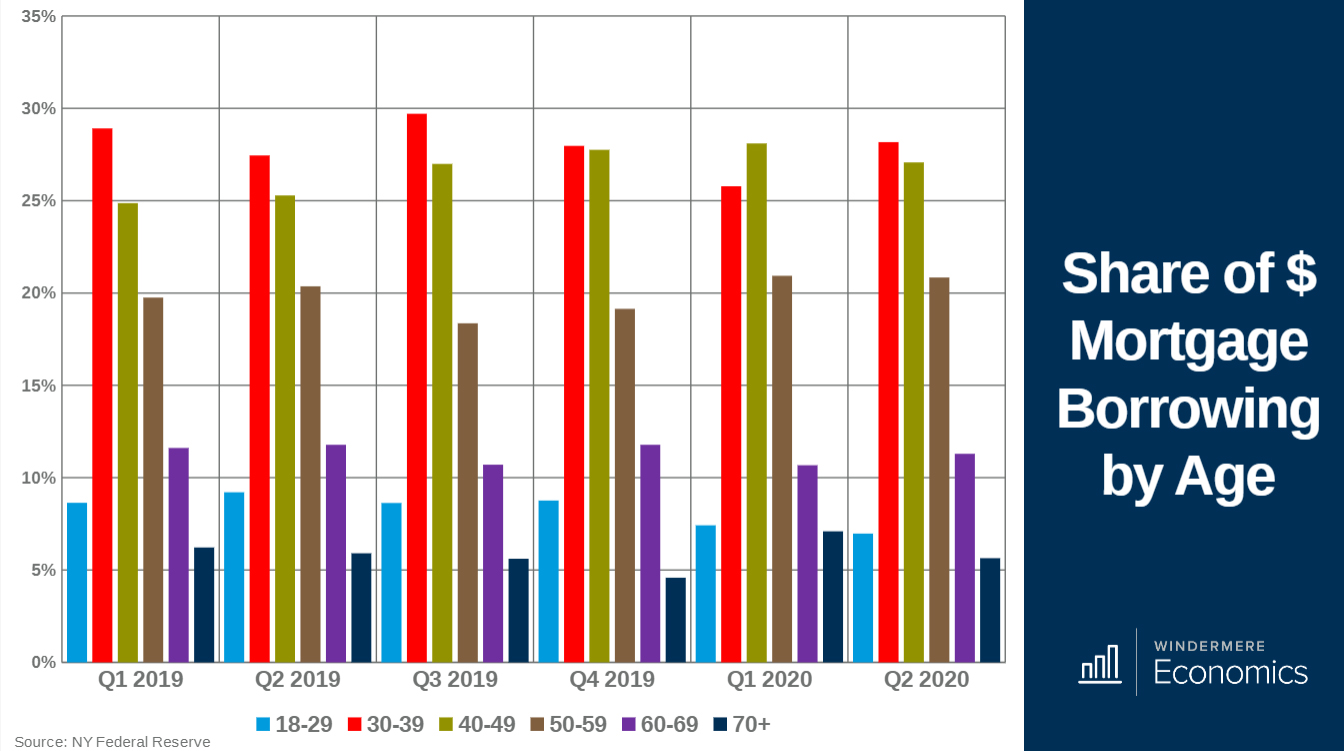 Look at the red bars. These are borrowers aged 30 to 39. Yes, the older millennials and the very youngest Gen Xers are out in force, and this is even more proof that they’re buying homes. Again, and I really can’t emphasize this enough — millennials are already a major force in the U.S. homebuying market, and they will only get bigger over the next several years.

What about delinquency rates?

So, now we’ve looked at debt levels, and we’ve also looked at mortgage originations. Let’s take a look at delinquency rates, which, of course, have very significant implications, both directly and indirectly, when it comes to housing and the broader economy. 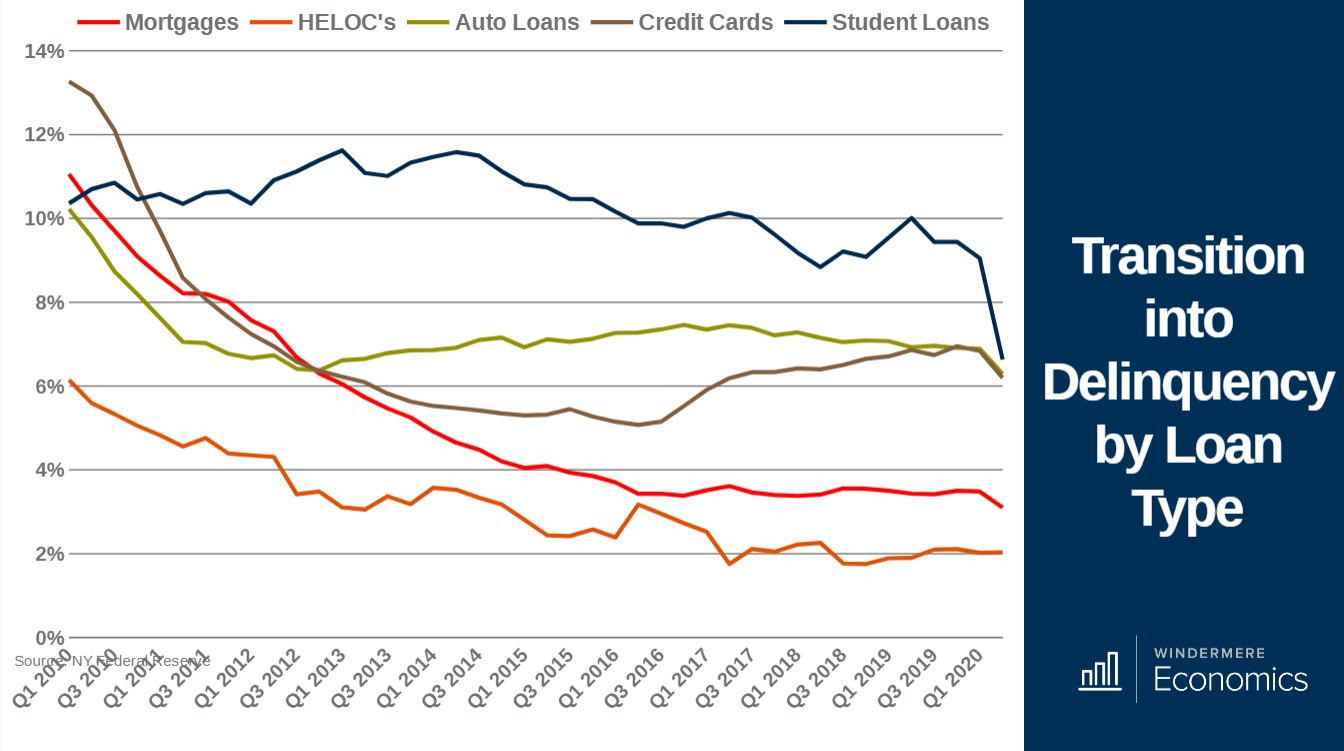 In general, there are no big surprises here. As of the end of June, 3.6 percent of outstanding debt was in some stage of delinquency. That’s a 1 percent drop from the end of 2019 and amounts to roughly $512 billion. But I do want to expand on a few of the numbers.

The first is student loans, which are important, quite frankly, because of the millennial generation of would-be homebuyers. You can see that the delinquency rate has been pretty stable for the past decade, but do you see the massive drop in the last quarter? Well, that was totally due to the fact that a majority of outstanding federal student loans are covered by CARES Act administrative forbearances.

Although it looks great on paper, in reality, if we take out forbearance, the delinquency rate is a lot higher than this and, I would argue, it’s something that’s actually keeping some younger homebuyers sidelined. But I will leave that topic for another day!

The second dataset I want to touch on is, of course, about mortgage delinquency rates. Here, you will see that the delinquency rate dropped precipitously between 2010 and 2016 before flat-lining in the high 3 percent range until last quarter, where you see that it dropped further.

Again, we can attribute this to the uptake in forbearance. According to my friends over at Attom Data solutions, there were just 17,000 new foreclosure starts in the quarter — down from 81,000 in the first quarter — because homeowners with federally backed mortgages were protected from foreclosure through a moratorium within the CARES Act.

So, there you have it. The latest data on household debt and credit. My view is that the numbers didn’t offer any great surprises — certainly nothing that those of you in the housing industry should be worried about.

That said, the overall drop in nonhousing-related credit is worth keeping an eye on, as it does have the potential to slow down our post-COVID economic recovery.

Prices are softening. But don't expect that to last, economist says